Looks like Royal Enfield is going through a really tough time. Only a couple of weeks ago, we brought you the news of a container truck carrying Royal Enfield models catching fire near Ahmedabad. Now, another truck carrying bikes made by the Chennai based motorcycle maker have been the victim of a fire accident. The accident happened on the Pune-Mumbai expressway yesterday. 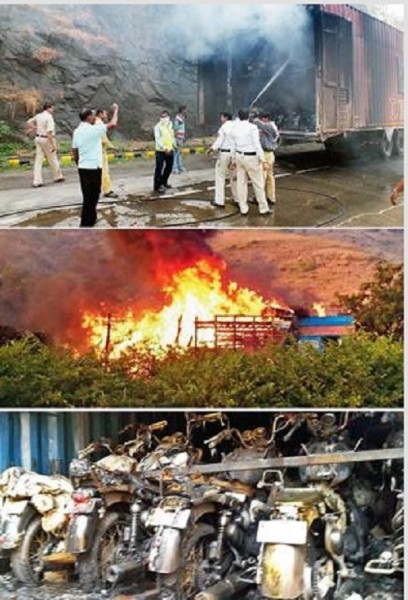 According to details, traffic on the Mumbai-Pune Expressway came to a standstill after a Mercedes-Benz car rammed into a container carrying Royal Enfield bikes inside the Madap tunnel. The impact of the collision was so high that both the car and the container caught fire. Drivers of both vehicles left the spot immediately. Although the exact figure of bikes is not known, reports say all the bikes have been destroyed by the fire.

In the images, we can see some of the models which are the Thunderbird models built by Royal Enfield. Already, all Royal Enfield models have a high waiting period and with this, some more owners will have to wait a more longer to lay their hands on their Royal Enfield.