The third race of 2015 season of JK Tyre Volkswagen Vento Cup witnessed extreme action as 20 drivers went flat out fighting for championship points. Starting on pole position was Hyderabad’s Anindith Reddy. Joining him on the front row was Polo Cup 2010 champion Sailesh Bolisetti. The second row of the grid was occupied by Junior Cup driver Raghav Sharma in third and Ishaan Dodhiwala in fourth. Championship leader after Round 1, Karminder Singh, started the race in fifth position joined by Junior Cup Championship leader Sahil Gahuri in sixth. 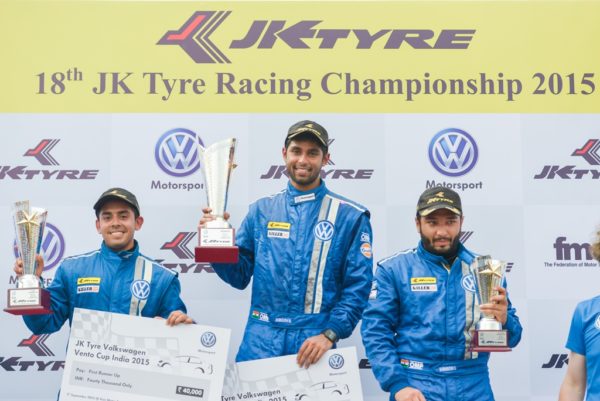 The Vento Cup race started off with the first retirement of the race coming on the very first lap in the first corner itself where Sailesh Bolisetti was forced out of the track and ended up stuck in sand trap between the first and second corner. This allowed Raghav Sharma to climb up into the second position, right behind Anindith Reddy. Ishaan Dodhiwala and Karminder Singh stayed behind them in the third and fourth position respectively. The front runners kept driving in this same sequence till a red-flag incident on lap seven forced the race to be stopped. Harkishan Wadia, driving in the fifth position, lost control over his car, cut across the corner #8 and hit Raghav Sharma’s car before going into the tyre wall, thus forcing the officials to bring out red flags.

The race restarted with Anindith Reddy in the lead followed by Ishaan Dodhiwala in second and Karminder Singh in third. The top three drivers maintained their positions till the finish line while the middle order racers fought to clinch the crucial championship points. Rithvik Thomas, who had started all the way back in 10th position, came home in fourth while eighth position starter Vigneshvar Devarajan finished fifth. In all, the first race of the weekend witnessed 15 drivers finishing the race while five retired due to the numerous clashes that took place throughout the races. 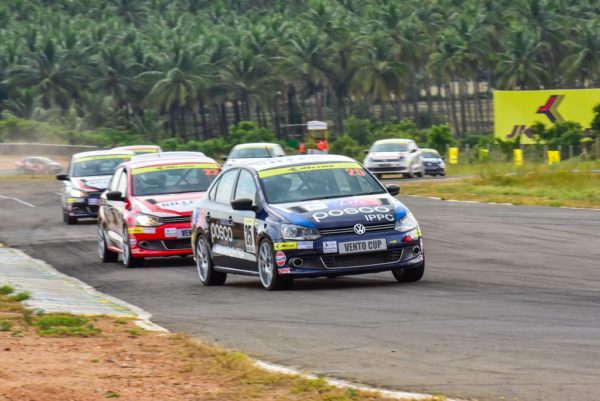 An elated Anindith Reddy said, “I am extremely happy with a win today. This gives me all the important points in the championship. I was happy with the pole position in the morning and converting that into a win was the best I could have achieved today. Tomorrow’s race is not going to be easy as I will be starting way back in 8th.”

Sirish Vissa, Head of Volkswagen Motorsport India, commented after the race, “The competition has gotten extremely fierce this time. Being well-accustomed to their race machines now, the drivers are pushing the limits – results of which are not always rewarding. With 25% of the grid not making it to the finish line, we have a huge task at hand to bring back those race cars back in shape for the race tomorrow. I hope we can see more finishers tomorrow with equal amount of aggressive racing.”