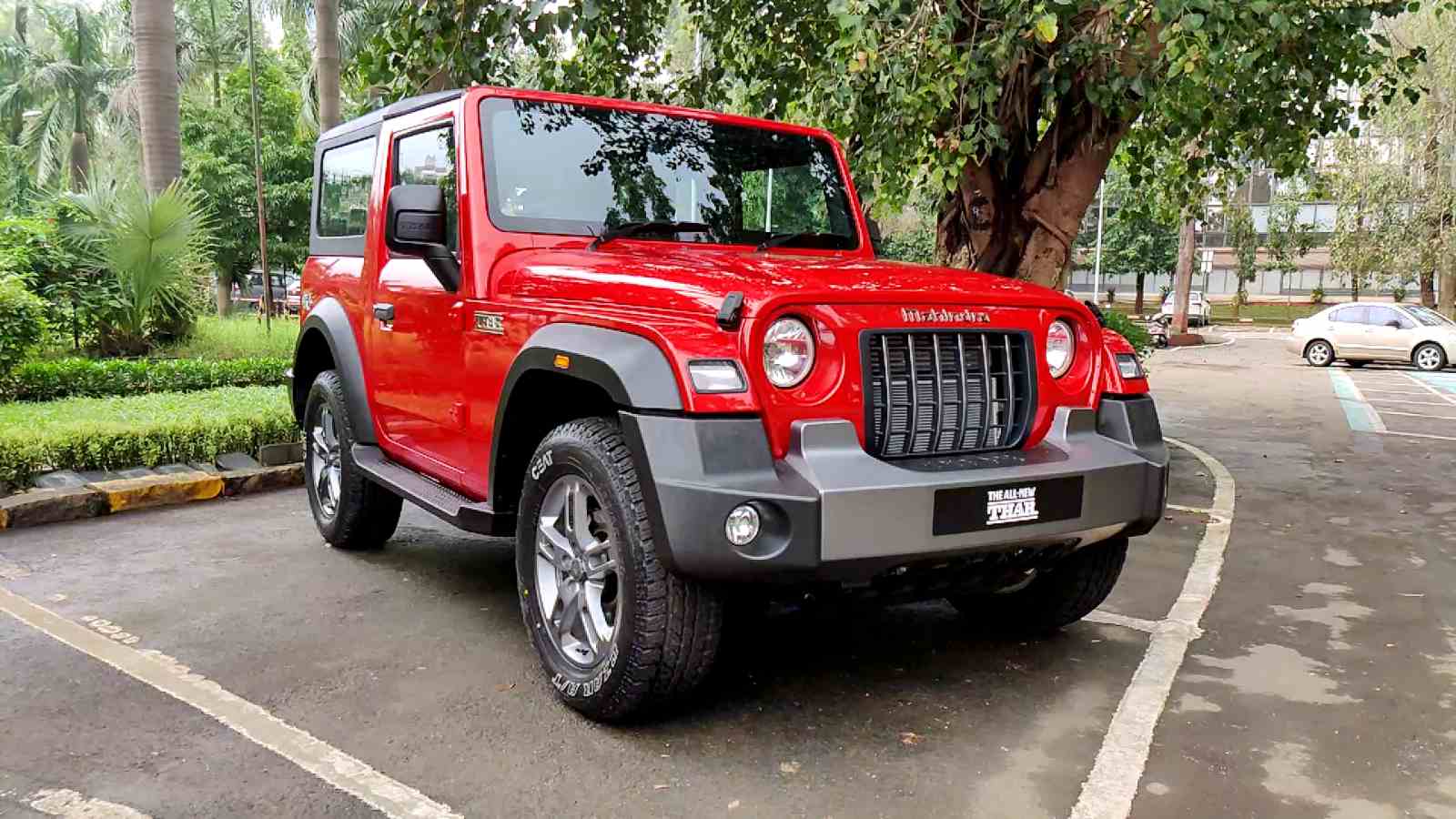 The all-new Mahindra Thar injected some enthusiasm in the dull Indian automotive scenario when it was revealed in all its glory a few days back. We got a chance to get behind the wheel of the all-new Thar to know what has changed in this iconic homegrown off-roader. For those of you who are a little bit familiar with the nameplate might remember that the previous-gen Thar was a little too hardcore in its approach and didn’t offer day-to-day practicality.

Is it more practical now?

Well, that seems to have changed now because the new Thar has been tweaked to appeal to a new set of buyers and also those who liked what it offered but sat on the fence as it wasn’t a practical vehicle for everybody.

Mahindra has addressed that and will offer the new Thar in two variants – AX and LX. The former will be presented to the hardcore fan and will offer 16″ steel wheels with a soft top and a six-seater configuration (sideways placed rear seats), manual AC and power steering and windows, while a hardtop and front-facing rear seats can be ticked through an option pack. On the other hand, the LX comes fitted with all the bells and whistles like LED DRLs and fog lamps, eight-way adjustable driver’s seat, tyre pressure monitoring system, auto AC, 7.0-inch touchscreen and 18″ alloy wheels.

The previous-gen Thar looked rugged and had that pronounced go-anywhere look. The new Thar looks rugged too but looks a little bit more ‘International’. One good look at its face and you would realize that the looks are inspired by the Jeep Wrangler. It looks bulkier and more muscular than before. The bonnet is lifted to comply with the updated pedestrian safety norms. The Thar still gets halogen lamps handling the illumination department. Another major change up front is the new grille which looks debatable, to say the least. 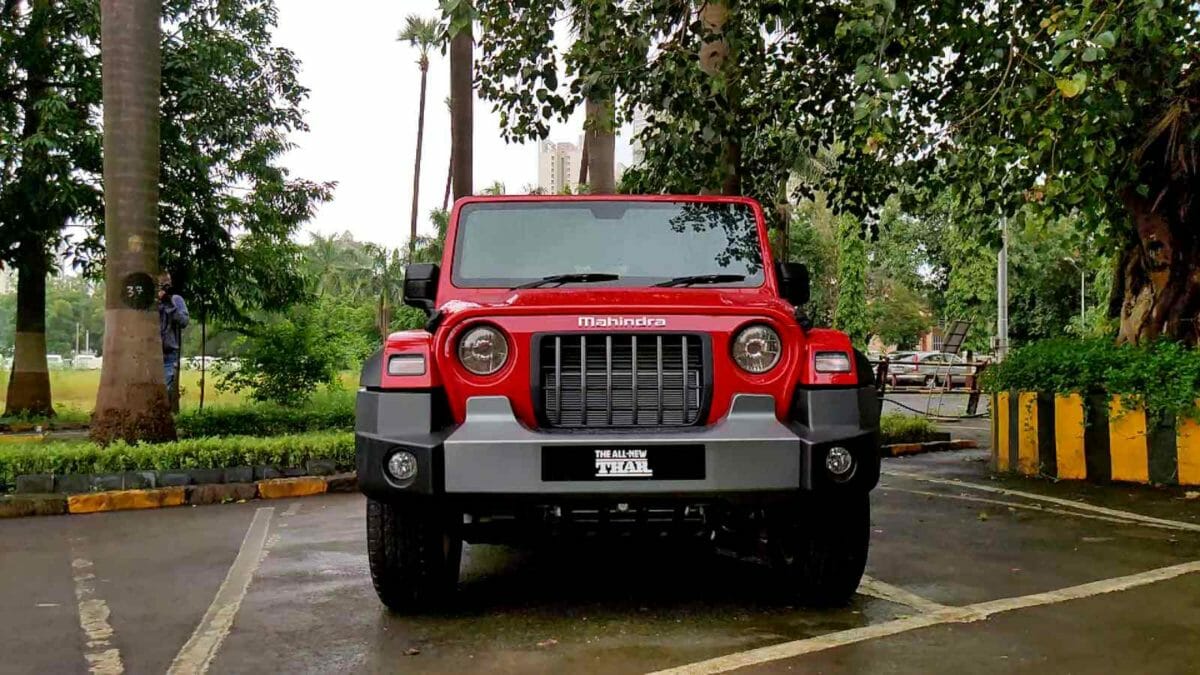 The bumper looks chunky with its two-toned treatment. Previous-gen Thar owners had a major gripe regarding its windscreen up front resulting in seepage of water inside the cabin. Mahindra has addressed that issue as well. Another thing which stands out is the ‘Thar’ branding which is splattered all across the car and gives it a more upmarket feel. The side profile is highlighted by chunky fenders and the hardcore door hinges which gives it a rugged look. The new Thar rides on the widest tyres in its segment. The 18-inch alloys are wrapped in 255 section rubber and the design of the alloys looks pretty neat too. The fuel lid is not remotely operated though. So every time you have to fill this beast’s belly with fuel, you would need to slot in the key to open the lid. 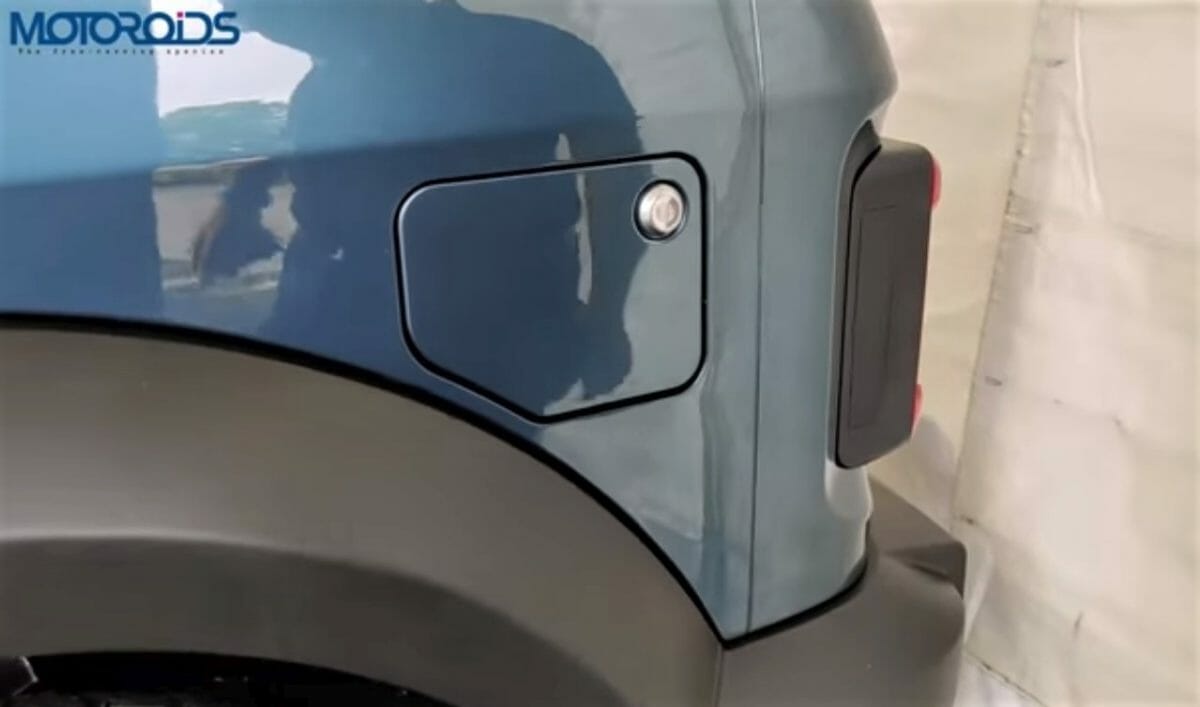 Still capable off the road?

It would have been downright disappointing if Thar lost its off-road capabilities in order to become family-friendly, right? A lot of things get ruined in order to become family-friendly but the Thar is still ‘R’ rated when it comes to its off-roading capabilities. ‘R’ stands for Rugged in Thar’s case. The front now gets independent suspension while the rear gets mechanical locking diffs and gets rid of leaf springs in favour of a multi-link setup. The new Thar can wade through 650mm of water and offers an unladen ground clearance of 227mm and approach, ramp-over and departure angles of 42 degrees, 27 degrees and 37 degrees. According to the company, the Thar now offers 33% more traction than before. Its crawl ratio stands at 42:1 which makes it far more capable than many expensive machines. 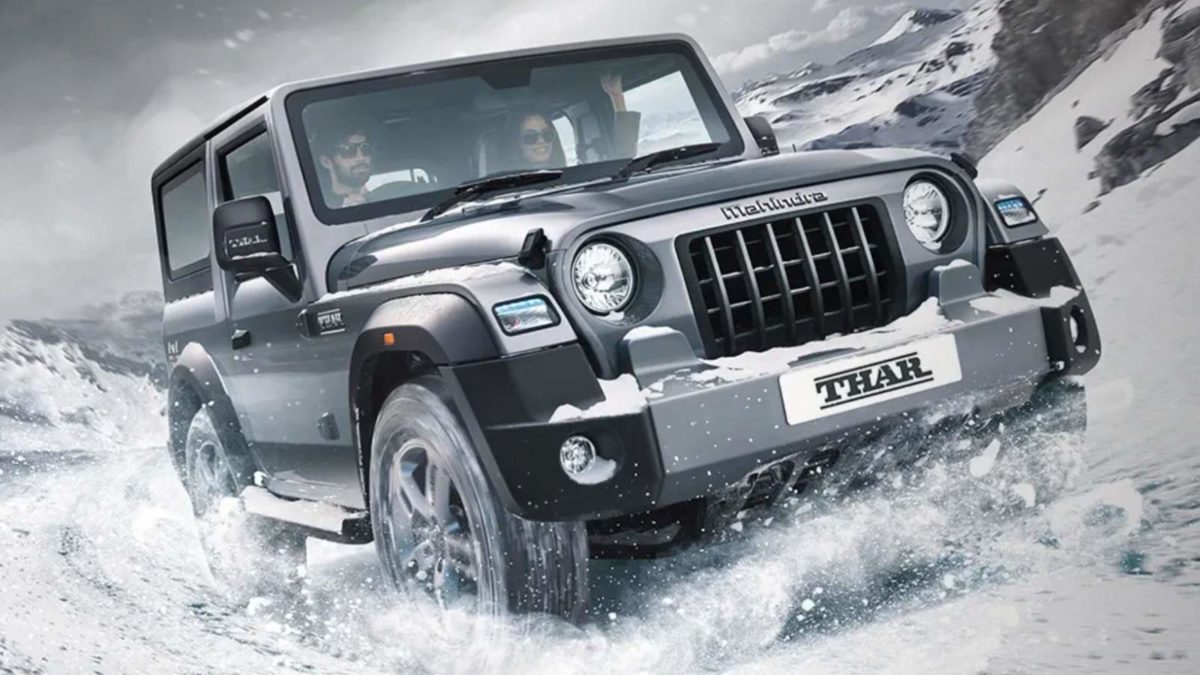 What impresses us even further is the fact that the new Thar has a water wading capacity of 650mm. Want to cross a river while sitting inside your beloved vehicle? Get a Thar! It still is built upon a body-on-frame chassis which is a 3rd-gen design of the architecture.

How does the cabin feel now?

Getting inside the car requires some effort because of the 227mm ground clearance but the footrest which comes as standard equipment does ease the process a little. Once you are comfortably seated in the driver’s seat, you would notice that it still offers a very commanding driving position. The wide rearview mirrors with Thar’s branding provide a good view behind. Inside, things look contemporary and there’s a new steering wheel with buttons for cruise control and audio/telephone, while the central infotainment screen gets weather-proof controls and a dedicated screen to display off-road driving information, including wheel turn angle, tilt angle, engine temperature and lots more. 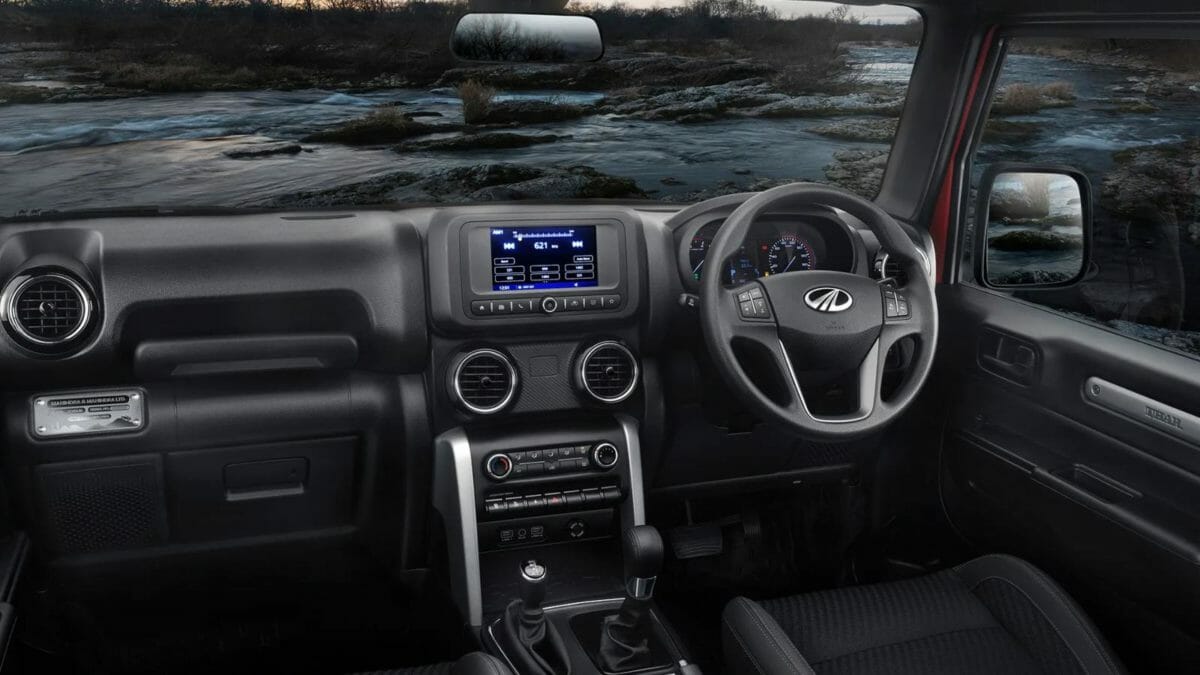 The buttons all-around look and feel premium while the materials used on the dashboard have a rugged touch. The seats provide nice optimum bolstering and the same continues to the rear as well. Inside the washable cabin, the front-facing rear seats offer a 50:50 split and music can be blared through roof-mounted speakers. Two adults can comfortably sit on the rear bench and the headroom seems sufficient too. The rear windows are fixed units and that is a downer for some. The rear seat does lack storage units and USB charging ports. The boot space is close to being non-existent. Dual airbags, traction control and ESP combine together to form a good safety net in the Thar.

The new Thar gets an updated version of the 2.2-litre mHawk diesel engine which cranks out 130hp, 300Nm and will be available with a 6-speed manual gearbox and an optional, Aisin-sourced, 6-speed torque converter. If you like petrol engines, the 2.0-litre mStallion motor will also be on offer. It cranks out 150hp of power and 300 Nm (MT), 320Nm (AT) of torque. Transmission options include a 6-speed manual and a 6-speed automatic gearbox. We got to drive the 2.2-litre mHawk diesel engine with the 6-speed manual and we came back pretty impressed. 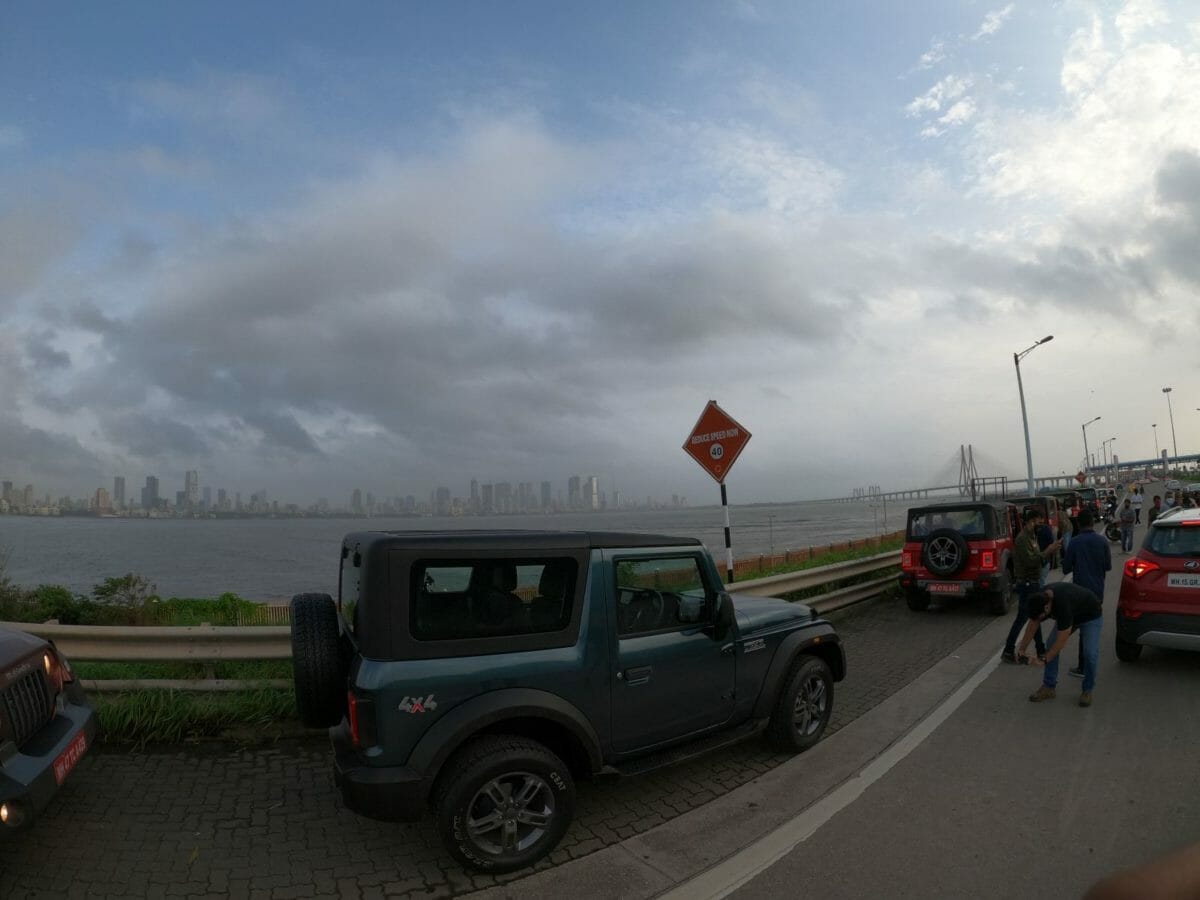 As much as 95% of peak torque is available from 1250 rpm which makes the new Thar very tractable in the urban environment. It pulls cleanly from a standstill and another thing which you would notice is how refined the diesel powertrain has become! The gearbox is smoother than before but not the smoothest of the lot. It reminds you every now and then that it is a rugged vehicle and you shouldn’t mistake it for the pseudo-SUVs that we have today.

We didn’t get a chance to drive in its most suitable environment: off the road, but it tackled the urban jungle and its wilderness pretty well too! The engine accelerates in a very linear manner and feels at home running between 2000-3000 rpm. The steering is light and isn’t very communicative. The ride quality, however, is a little bouncy at slow speeds. It has to do with the high profile tyres. While we are pretty sure that the tyres will perform brilliantly off the road, they do hamper its on-road driving dynamics. The ride might not be as composed as some of the modern-day SUVs but can they do what the new Thar can? They wish so! 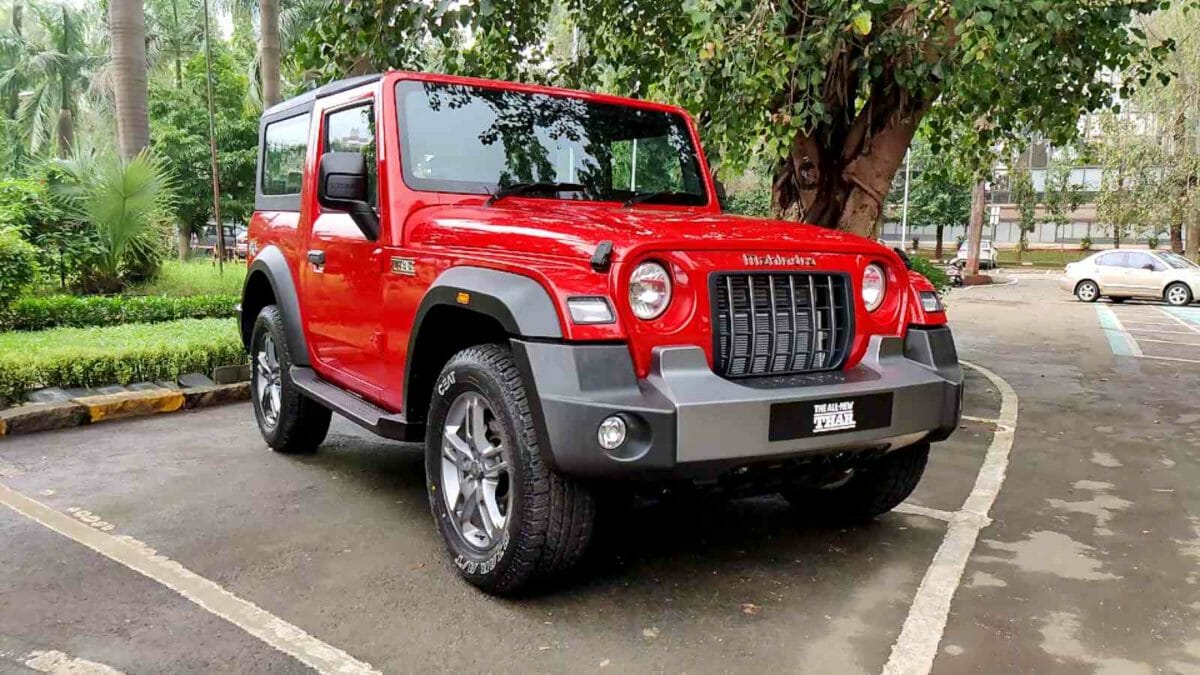 Although Mahindra hasn’t revealed any official fuel economy figures, the instrument cluster showed us that the updated machine was delivering 14 kmpl. Expect that number to go a little higher if you take it out on the highway and drive with a light foot.

The all-new Thar has become better in every aspect and Mahindra has particularly worked towards making it a more versatile offering. It has become more family-friendly and that too, without losing on its strongest point: Ruggedness and off-road capabilities.

We now have a genuine off-roader which might get your family’s approval. Everyone is now all smiles and especially Mahindra for pulling off such a commendable job with the all-new Thar. The prices aren’t out yet but we can expect the Thar to please us in that department too.