The new 2015 Honda Jazz is a car that has lots riding on its shoulders. When launched earlier, the premium hatchback didn’t score very well. One of the primary reasons for this was its relatively high price tag. Due to extensive localisation however, Honda is hoping to address this issue with the new car. It is June and the rain gods have commenced their work. The subcontinent is being drenched, and our party capital Goa, is no exception. Our men are presently there, and have driven the all-new Honda Jazz. So here are some much awaited images and details of the car before we get you a detailed review. 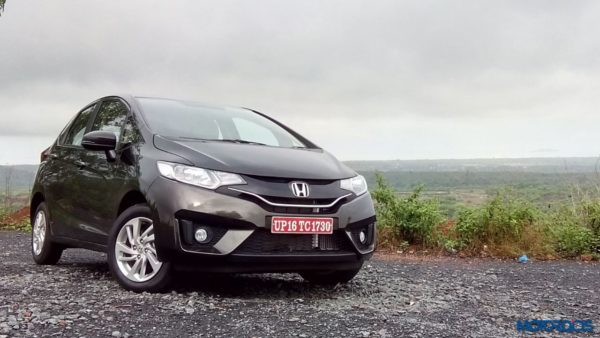 For the new Honda Jazz, the Japanese carmaker has given it a dose of freshness all around. Honda has revised the bumpers and the front one gets a glossy black horizontal slat on the grille and there’s a thin strip of chrome running below it. The front bumper gets integrated foglights, an honeycomb mesh covers the lower portion of the bumper and the air dam. The international version of the new Jazz gets daytime-running lights, which the Indian car does not. Viewing the side profile of the new Jazz, you will see a strong character line that stretches from the front wheel arch and ends at the taillights. The ORVMs are now mounted lower down on the door and get integrated turn indicators. 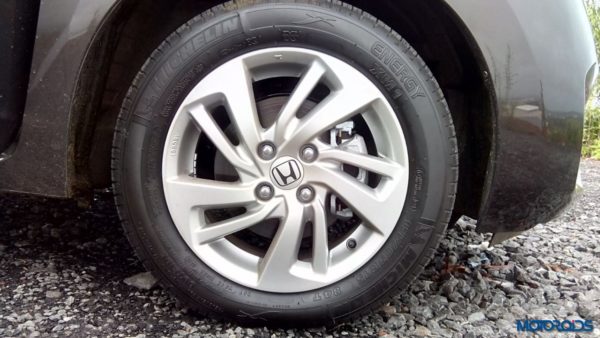 The top-end versions also get a new design for 15-inch alloy wheels which are wrapped by 175-section tyres. Honda has given the Indian Jazz higher ground clearance, which has caused there to be an apparent gap between the wheels and wheel arches. At the rear of the new Honda Jazz, there’s a reworked bumper that get pseudo air vents. A thick strip of chrome runs between the rear lights and the rear windscreen gets a wiper. The new Jazz gets a roof-mounted spoiler with integrated brake lights. 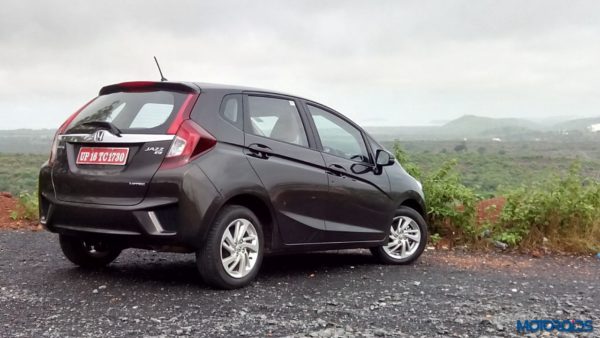 accents on some of the trim pieces. Honda has given the new Jazz features that befit a premium hatchback. The steering wheel gets integrated controls for the audio and telephony system. Depending on the variant, the new Jazz comes either with a 5-inch non-touch or a larger 6.2-inch touch-sensitive Audio Visual Navigation (AVN) display on top-end variants. Even the lower variants get built-in handsfree telephone feature and display the feed from a reversing camera in three modes – normal, wide and top-down. The audio system gets Bluetooth and AUX-in/USB connectivity for your iPod, smartphone and a power socket. The system with the larger touch-enabled display gets a DVD-playback feature, but strangely only gets a ‘normal’ view mode for the reverse camera. 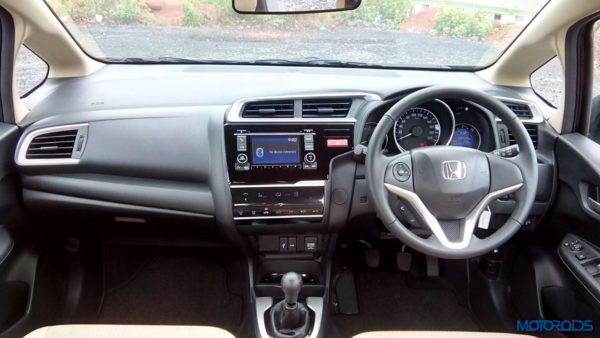 The 2015 Honda Jazz’s dashboard and centre console is similar to that found in the City saloon. That means you get automatic climate control with touch-sensitive controls. The practicality department gets answered by nine cup holders – now you can carry the beverages of your mates too. Practicality is further aided by a gear position indicator on the instrument console and an Eco Assist light. The latter changes colour according to your driving style. A multifunction display draws data on real-time fuel economy, ambient temperature and the ubiquitous time info among others. 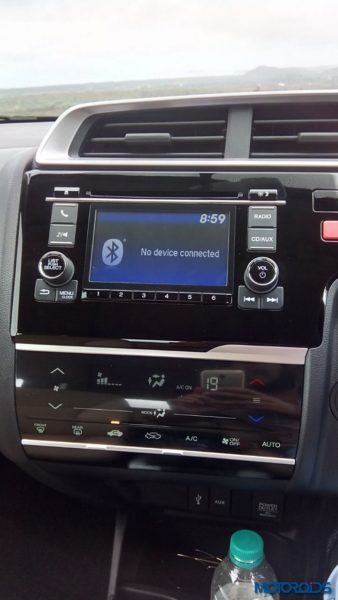 As far as engines go, the 2015 Honda Jazz comes in petrol and diesel guises. The latter will likely become the talking point as this is the first time Honda has plonked an oil

burner in the Jazz. The unit is a 1.5-litre 4-cylinder i-DTEC that develops 100 PS of power and 200 Nm of torque. This power is then sent to the front wheels via a 6-speed manual gearbox (as opposed to previously mentioned 5-speed box). The other car comes with a 1.2-litre, 4-cylinder i-VTEC engine that can be either had with a 5-speed manual or a continuously variable transmission (CVT) option. The latter also gets steering-mounted paddle shifters. This petrol engine makes a maximum of 90 PS of power and 109 Nm of twist at the front wheels.

Keep following Motoroids as we will soon post our comprehensive review of the 2015 Honda Jazz. In the meanwhile, have a look at some images of this new Honda hatchback.

Honda dealers have supposedly begun accepting bookings for the new Jazz. To read more on that, click here.