After a handful of teasers, the McLaren 675LT has been revealed in images, and will make its world debut at the upcoming, 85th Geneva Motor Show in March 2015. 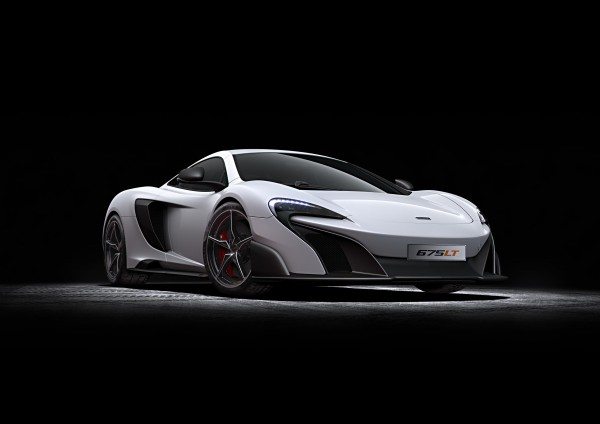 McLaren will be busy crowding up its range of sports cars in the coming years, with the new smaller, 911-rivaling Sports Series coming soon which will also spawn 4 models. The latest announcement from the Woking based manufacturer reveals the 675LT, the third, and the most powerful model to join the newly named Super Series, now comprising of the 650S and the Asia-specific 625C. LT, an acronym for “Longtail” ( nomenclature derived from the iconic McLaren F1 GTR ‘Longtail’ ) will be the lightest, the quickest, and the purest version in the Super range. The 675LT will debut at the Geneva Motor Show 2015, alongside the manic, track ready P1 GTR. 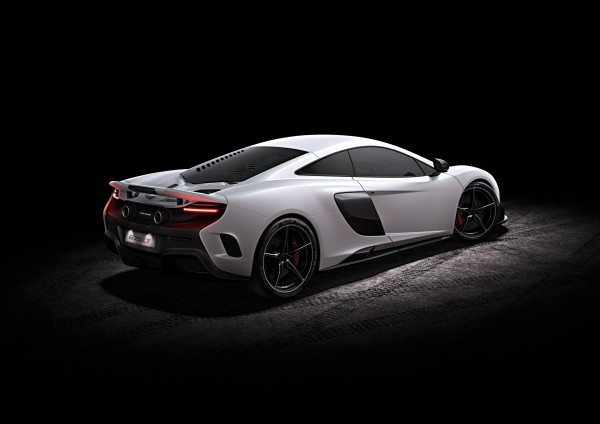 Offered as a Coupé only, the 675LT will also be the most track-focused, yet road legal, model in the McLaren Super Series, with a power to weight ratio that eclipses the Ferrari 458 Speciale. The sprint from 0-100 km/h (0-62 mph) takes just 2.9 seconds, with controlled torque delivery ensuring optimised traction off the line. Acceleration continues, with the 200 km/h barrier broken in 7.9 seconds, on to a top speed of 330 km/h (205 mph). 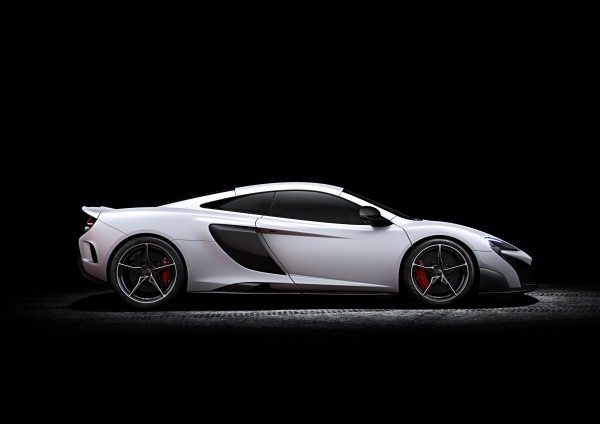 The first images of the car demonstrate a more aggressive look for the McLaren brand than has been seen before. Styling cues run from the extended carbon fibre front splitter, through an extended door blade and additional cooling intake, to the circular twin titanium exhaust pipes, giving a hint to the performance available for the most powerful and lightest model in the McLaren Super Series. The active ‘Longtail’ Airbrake is 50 percent bigger than the one fitted to the 650S yet, due its carbon fibre structure, is actually lighter. This is just one of the enhancements that add up to a dry weight of just 1,230kg. 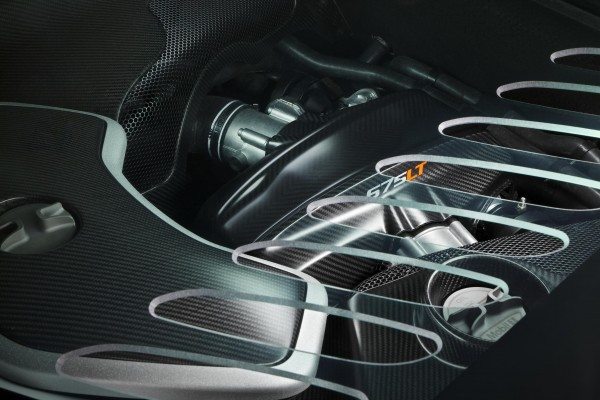 More than 50 percent of parts have been changed in the 3.8-litre V8 engine to deliver increased levels of power, torque and driveability. Upgrades include new, more efficient turbos, detail design changes to the cylinder heads and exhaust manifolds, new camshaft and lightweight connecting rods, and a faster-flowing fuel pump and delivery system. These changes are so significant, that the engine unit receives a new, unique code – M838TL. The low weight, low inertia power unit produces, as the name suggests, a power output of 675PS and a power-to-weight ratio of 549PS per tonne. 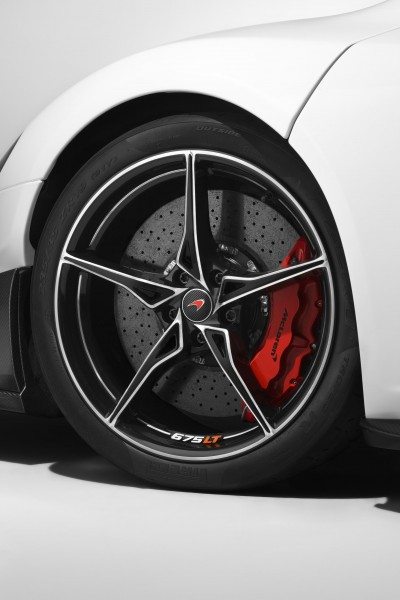 The 675LT is as fully track-focused as it is road legal with around a third of parts modified to suit this purpose compared with the 650S Coupé and Spider that continue in production alongside it.

The 675LT is over 100kgs lighter than the other models in the Super Series. This savings have been achieved through the extensive use of carbon fibre for the body panels, along with lightweight engine, chassis and body structure parts. In the pursuit of minimal weight, and to suit its purposeful intent, even air conditioning has been removed, but can specified as a no cost option. 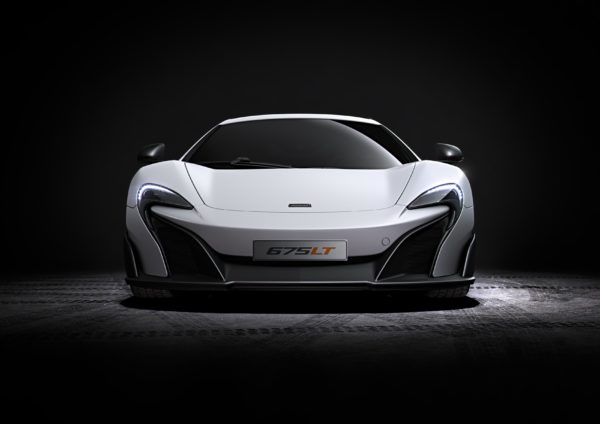 Below a newly designed front bumper sits a prominent carbon fibre front splitter, which works the air harder, complementing new front wing end plates to increase downforce levels over the front bodywork. The turbulent air from the front wheel arches is ‘cleaned’ as it flows towards the rear bodywork by sculpted carbon fibre side sills which run the full length of the lower bodywork. A subtle air intake is incorporated ahead of the leading edge of the rear wheel arch, below a more pronounced side intake behind the door, both of which feed clean cool air into the side-mounted radiators. 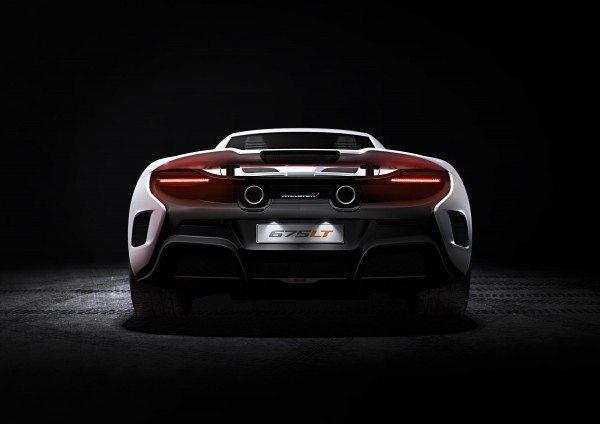 The aero balance is optimised by the active ‘Longtail’ Airbrake which, as with the McLaren F1 GTR ‘Longtail’, is larger – 50 percent larger than on other Super Series models. The reprofiled design flows into the lines of the new carbon fibre rear wings. Two circular exhaust pipes, forged from titanium, exit centrally through exposed bodywork below the rear wing. Despite a more complex design, the bespoke crossover system is designed to optimise performance and reduce weight, saving 1.1kg. 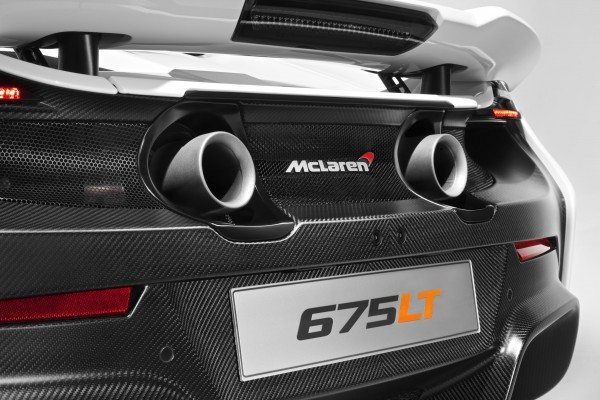 The rear deck and sections flanking the exhaust pipes remain exposed; designed to evacuate hot air from the engine bay as efficiently as possible, while a lightweight polycarbonate rear screen features further louvres. A louvred carbon fibre rear bumper reduces air pressure over the rear wheels, while the rear design is completed with a dramatic integrated carbon fibre diffuser. 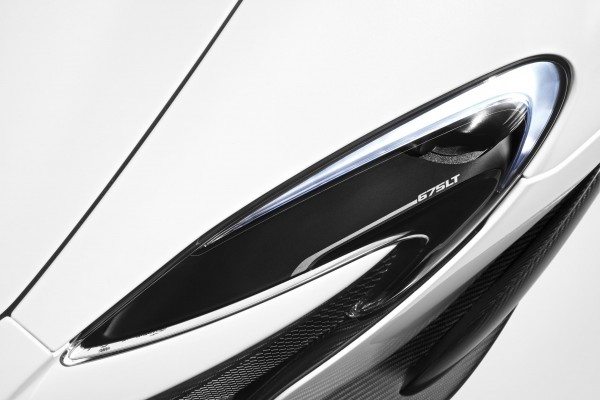 The 675LT is offered in five ‘By McLaren’ hero specifications, which includes four bespoke colours never previously offered: Silica White, Delta Red, Napier Green and Chicane Grey are all newly formulated paint hues for the 675LT. The famous heritage McLaren Orange completes the themes unique to the model. Each of the five ‘By McLaren’ specifications is complemented within the stripped out interior with carefully selected materials and colours. 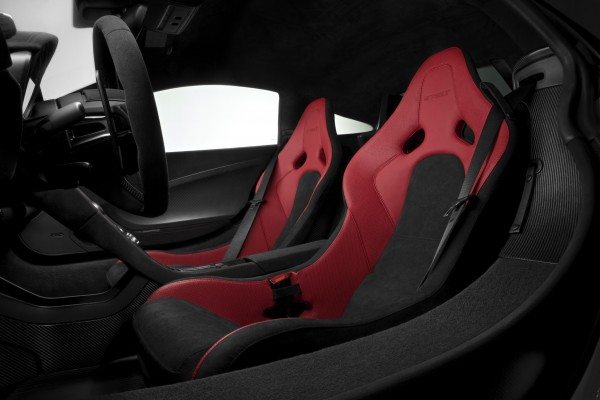 Inside, a pair of ultra lightweight carbon fibre-shelled bucket seats, upholstered in Alcantara® as standard and modeled on those in the McLaren P1™, provide comfort and support with no compromise on overall weight. A subtle 675LT logo features on the headrest of each seat, and is also present on the rev counter. In a change to the other models in the Super Series, the air conditioning controls are now incorporated within the intuitive touchscreen infotainment system. 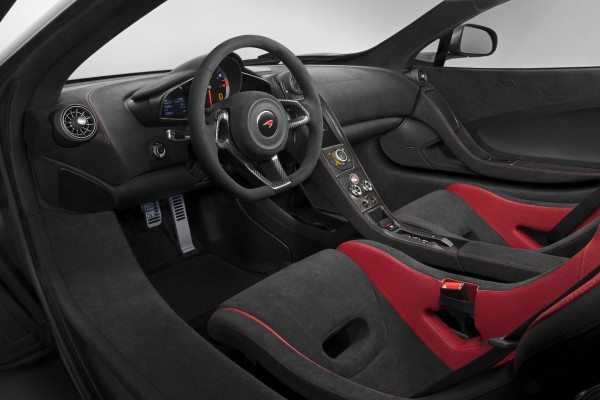