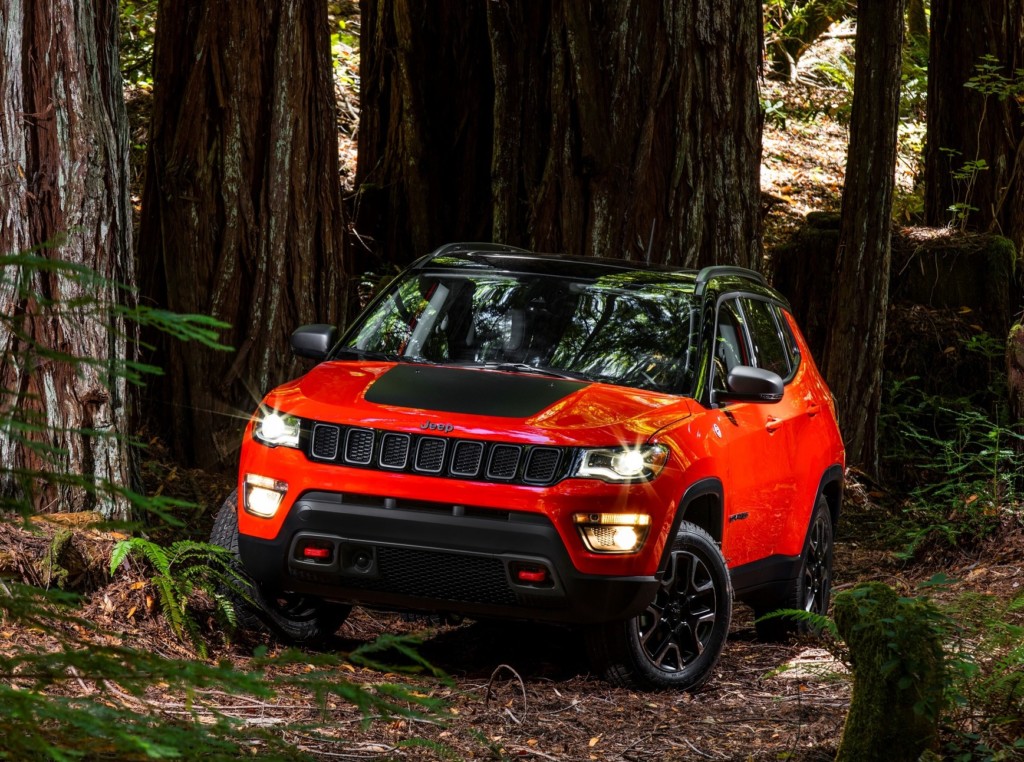 The wraps are off the highly anticipated, 2017 Jeep Compass. The newest member of the Jeep family was unveiled yesterday at FCA’s Jeep Assembly Plant in Pernambuco, Brazil, where it’ll be initially manufactured. In India, the all-new Jeep Compass will be locally manufactured at FCA’s Ranjangaon facility in Maharashtra, and will be rolled out in the country in 2017. Now when it is launched in India sometime next year, it’ll be way cheaper than the rest of the exorbitantly priced Jeep range. With estimated prices ranging between INR 25-35 lakh (ex-showroom), the 2017 Jeep Compass will take on the Ford Endeavour and the upcoming, all-new Toyota Fortuner. Here’s a design review to understand how the baby Jeep’s credentials pan out: 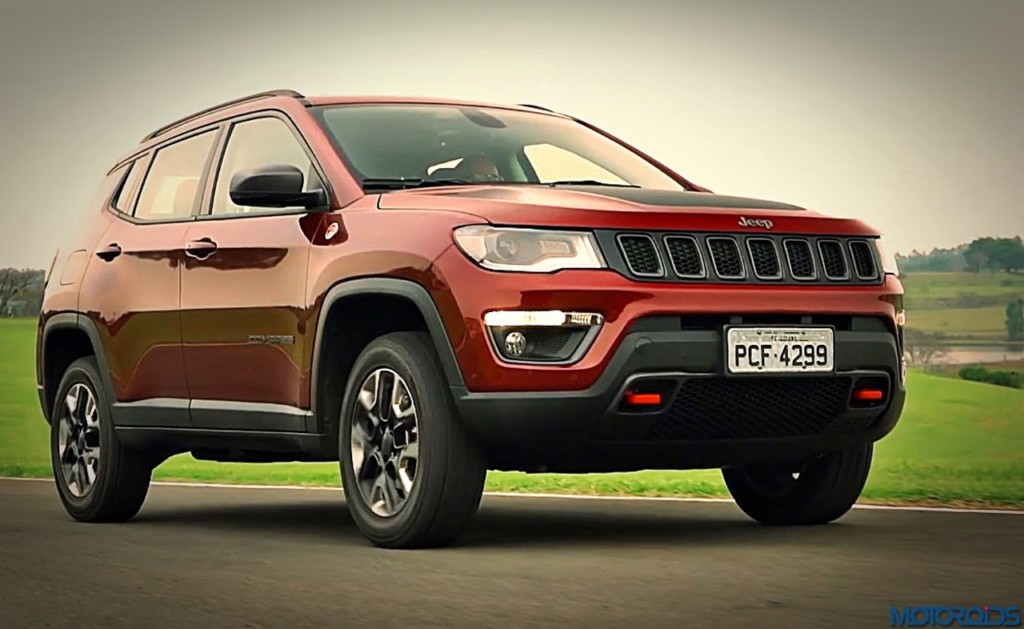 As far as appearances go, the new Jeep Compass looks like a scaled down Grand Cherokee, which isn’t necessarily a bad thing. The new Compass’s well-planted stance is complemented by the characteristic Jeep elements/details, which have been compacted into a global SUV that’s going to be sold in more than 100 countries around the world. The dimensions haven’t been revealed yet, so we can’t really find out how it measures up against the Fortuner and the Endevour. [Note: This is the “rugged” Trailhawk grade, different from the “posh” Limited grade that features lashings of chrome and contrast coloured skid plates, amongst other embellishments] 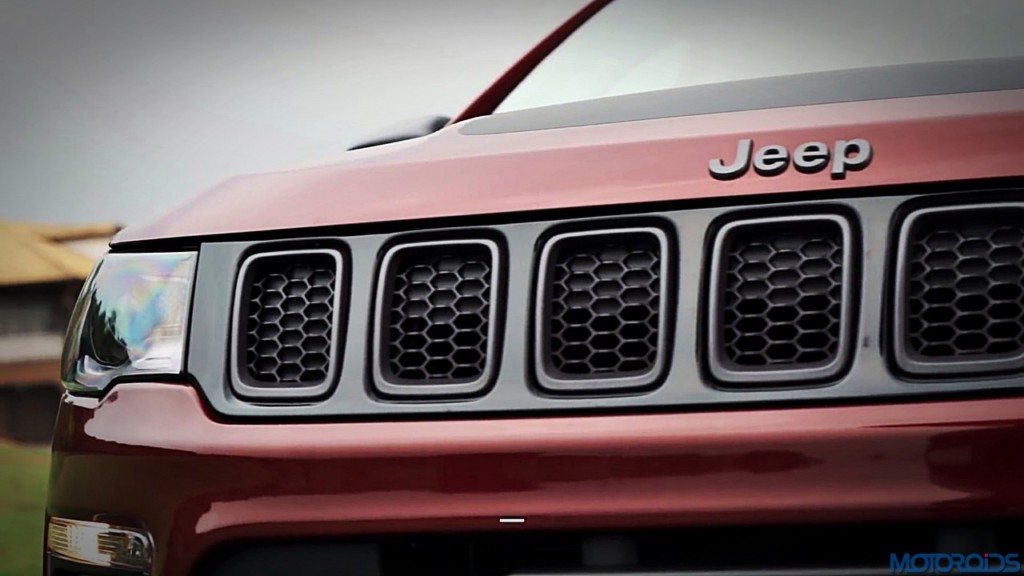 The Compass’s trademark, seven crate Jeep grille bears more than a passing resemblance to the one on the Grand Cherokee. 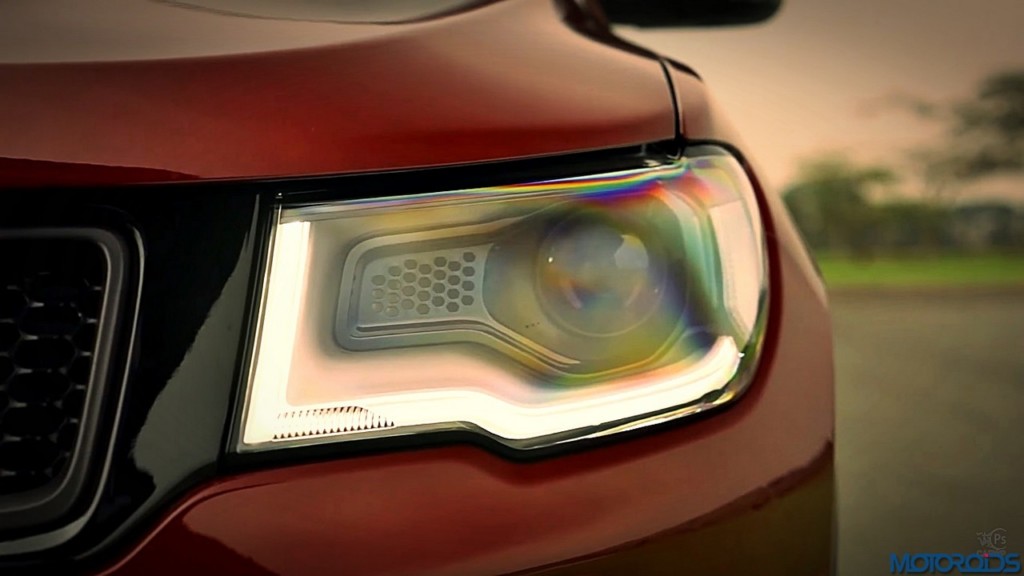 The grille flows into slim headlamps that are reminiscent of the Grand Cherokee’s lights as well, right down to the DRL signature. 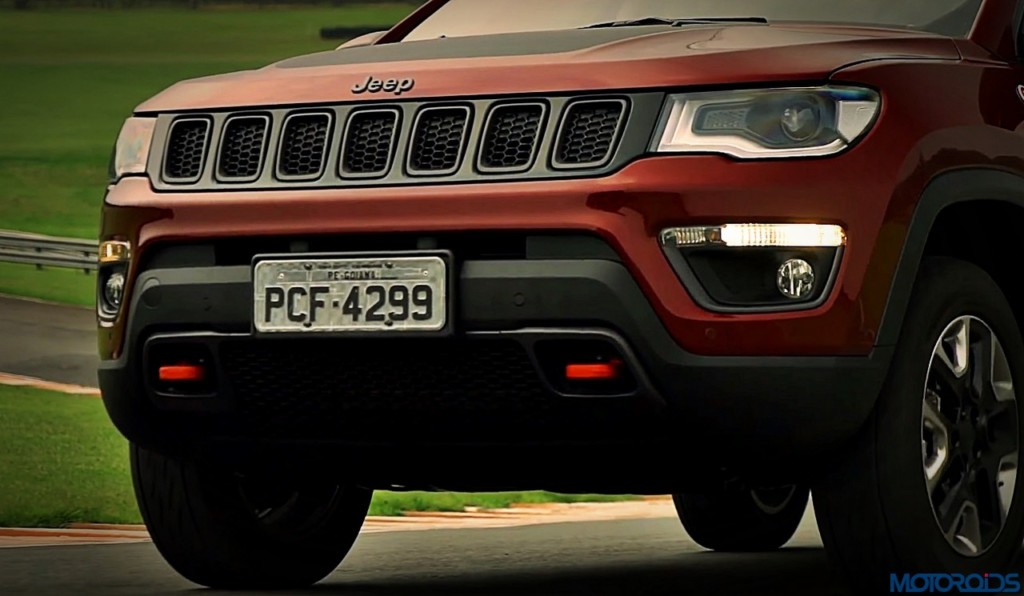 The Compass’s front bumper has its lines inspired by its bigger brother, while the twin, exposed tow hooks are a Trailhawk exclusivity. 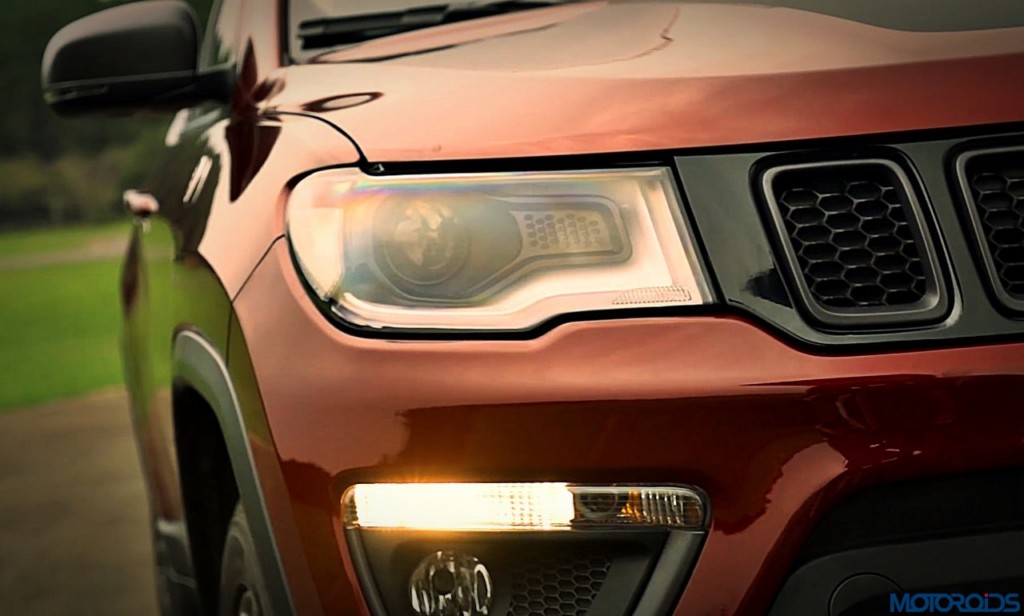 The headlamps however, do not host the turn indicators, which are positioned on the bumper instead, above the trapezoidal fog lamp housings. 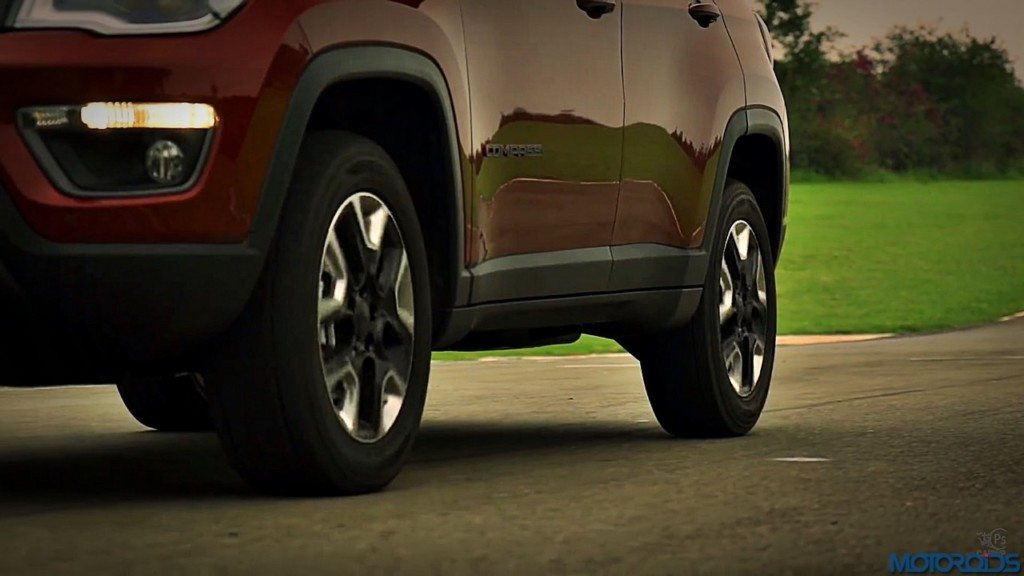 The Compass’s sides are characterised by the chunky, squared off wheel arches that flare up the bodywork around them significantly; subtle body cladding helps the cause. 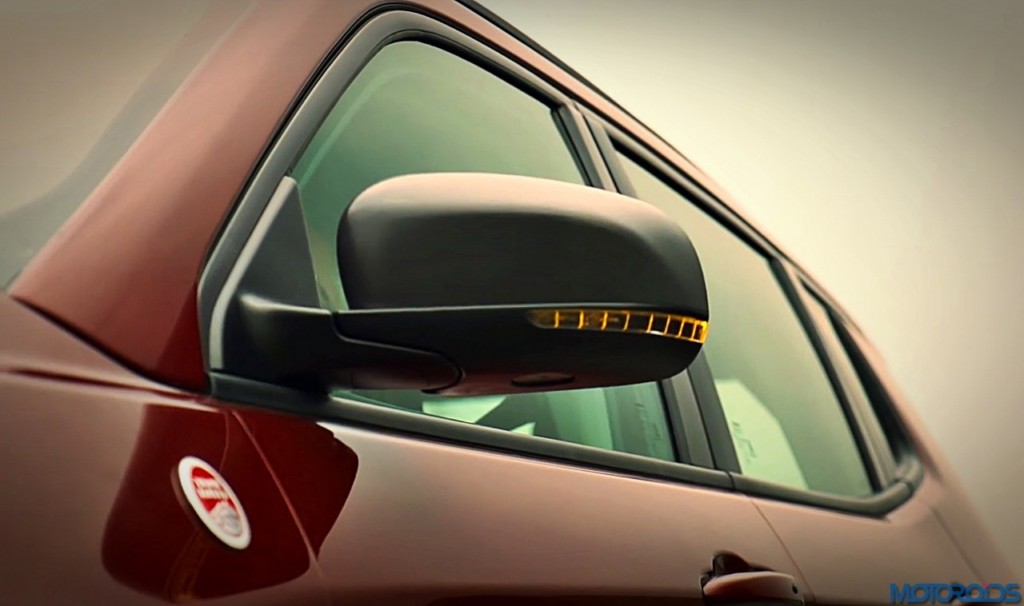 The glasshouse receives a sharp kink ahead of the C-pillar, which generates the smallest quarter window that we’ve seen on a SUV till date. 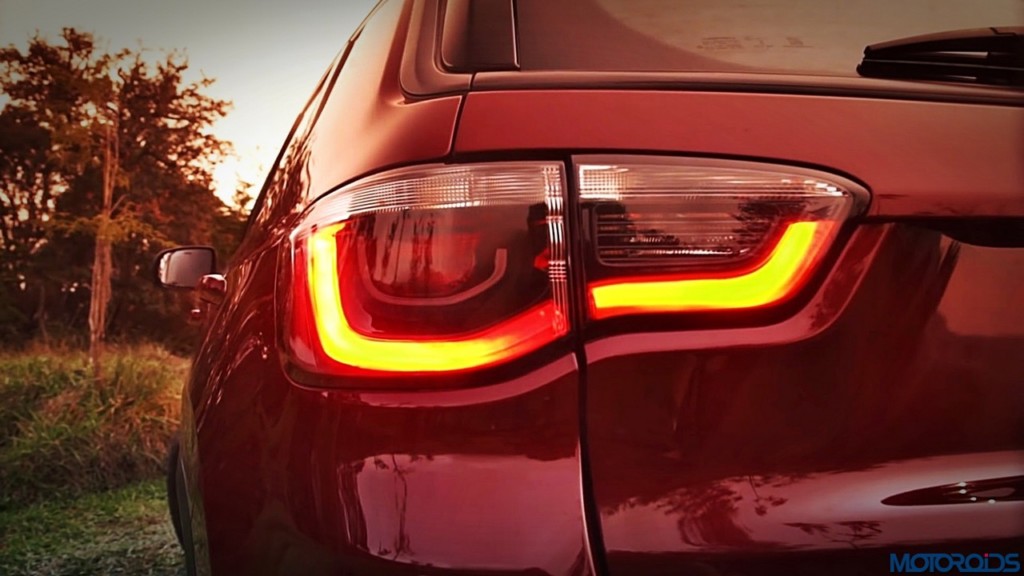 The LED tail lamps are inspired from – you guessed it – the Grand Cherokee. 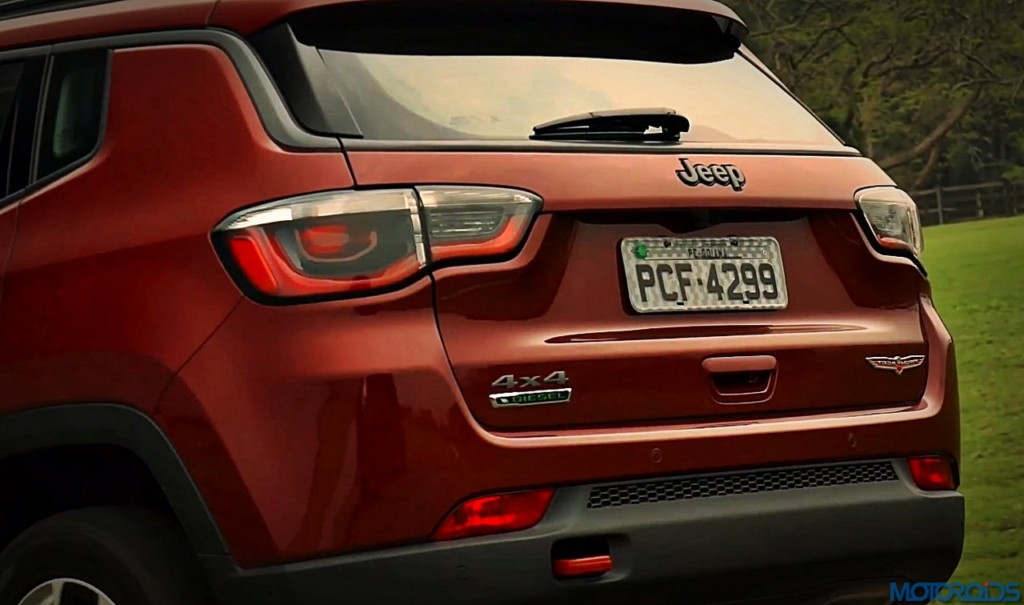 Again, the sculpted tail gate has everything to do with the Grand Cherokee’s tail gate, while the bumper gets an exposed, red tow-hook that’s a Trailhawk only feature. 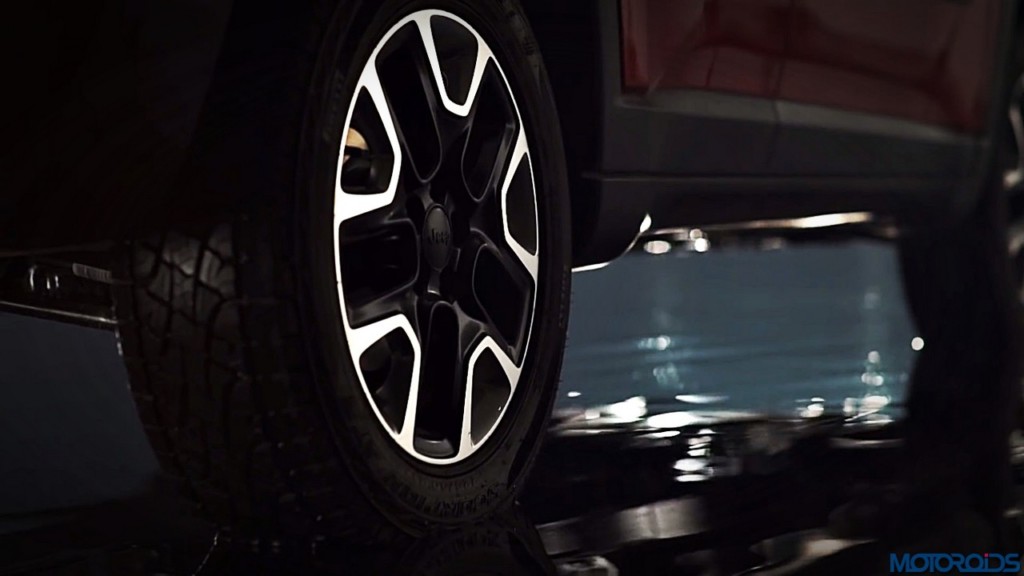 The 17-inch diamond cut alloy wheels are borrowed from the Renegade’s parts bin. 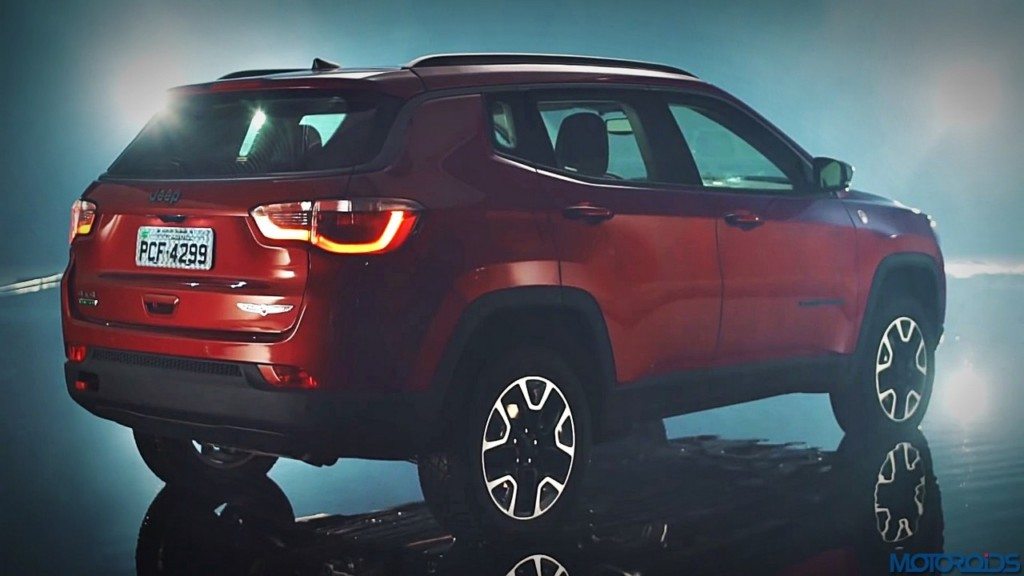 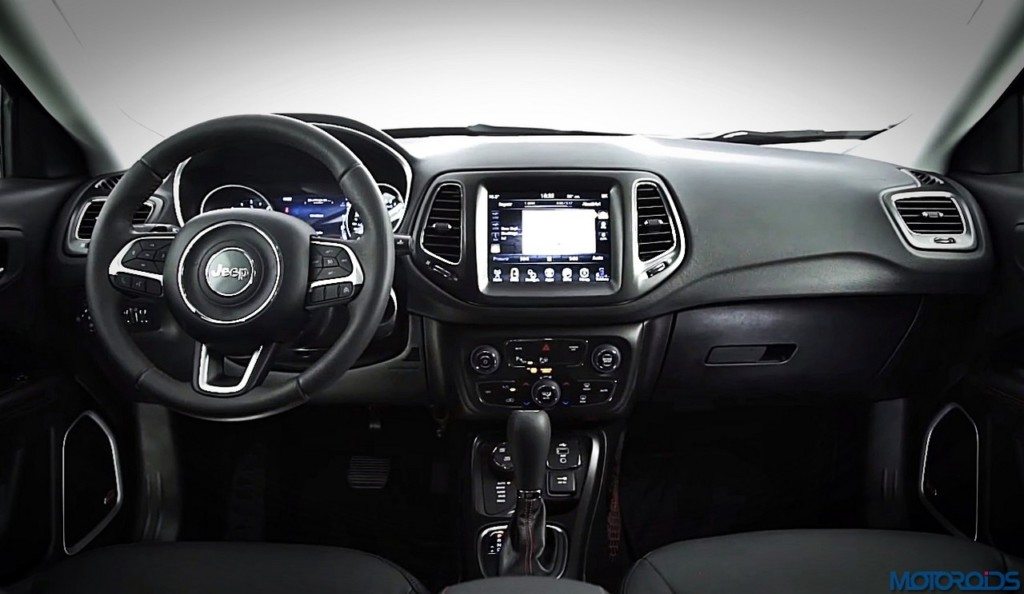 The new Jeep Compass’s interiors look like a friendly and warm place to be in. The Grand Cherokee influences can be seen here as well, especially in the way that dashboard’s been designed, but no one’s complaining. The Trailhawk grade gets an all-black colour scheme, highlighted by dull silver finished inserts around the air vents, while slivers of chrome can be found on the knobs and the steering wheel. 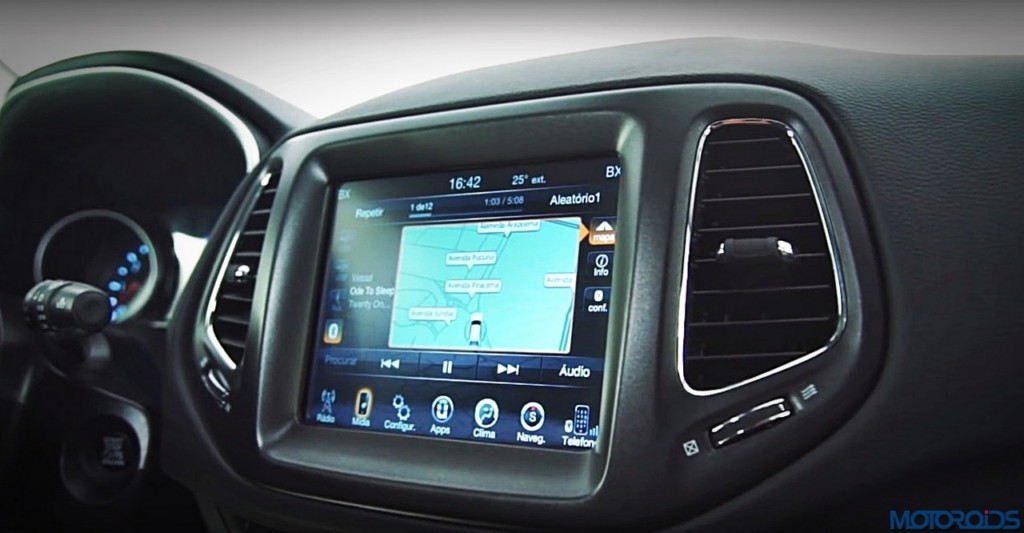 The Compass’s cabin gets FCA’s UConnect 8.4-inch touchscreen equipped infotainment system with navigation, along with Bluetooth, USB and Aux-in connectivity. 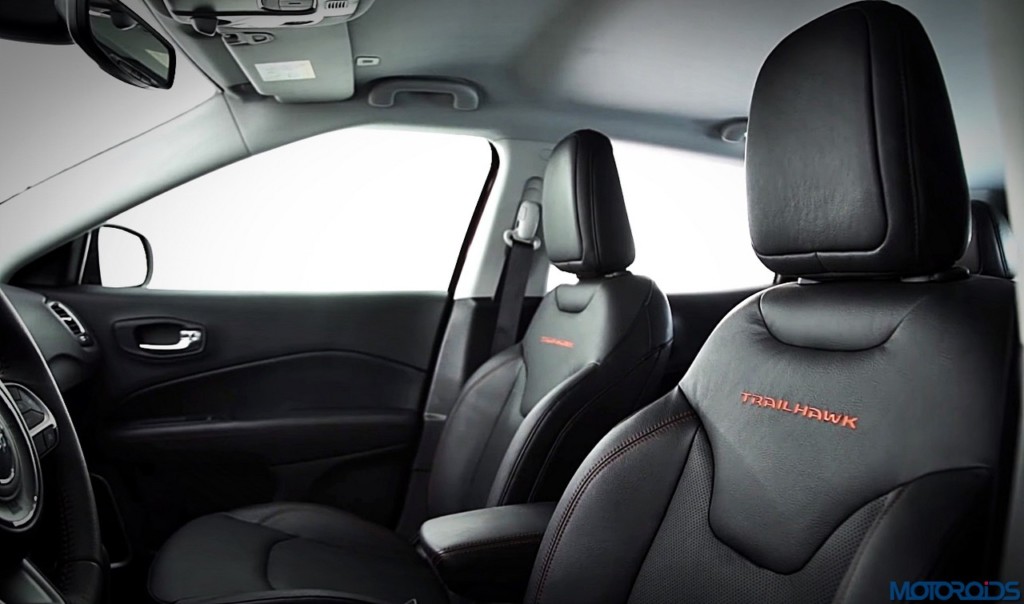 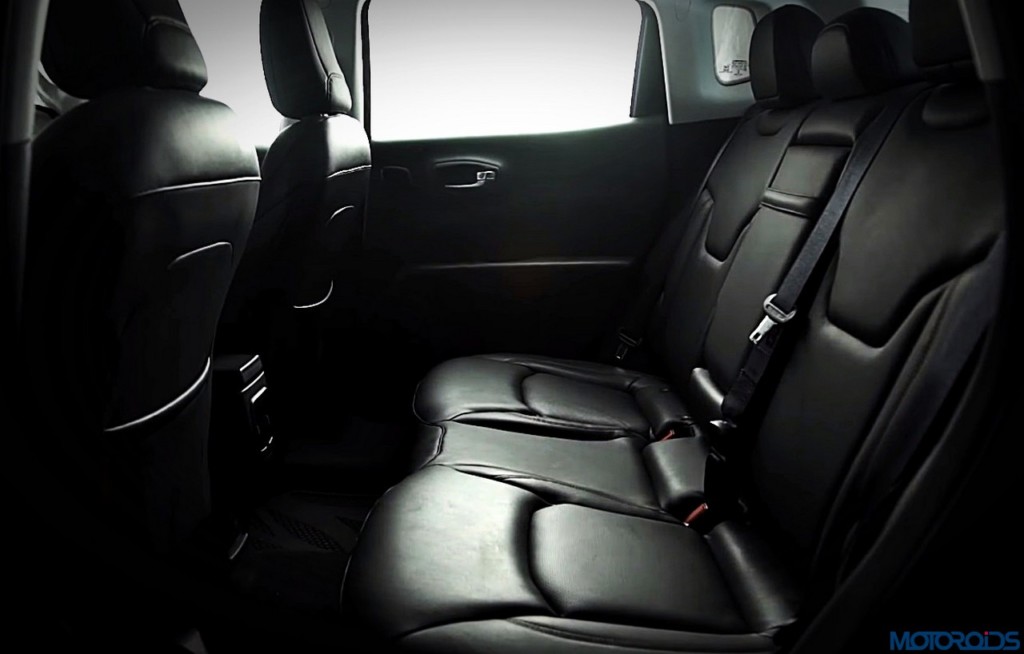 The rear seat looks accommodating enough, and get an integrated arm rest with cup holders. 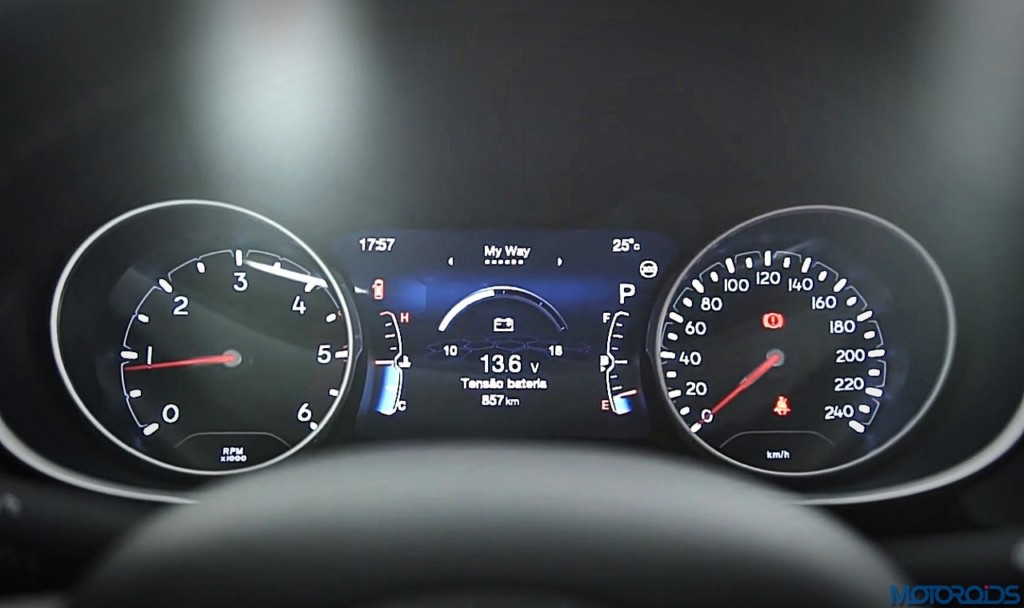 The twin-pod instrument cluster gets a large TFT display that shows everything from navigation information to outside temperature. 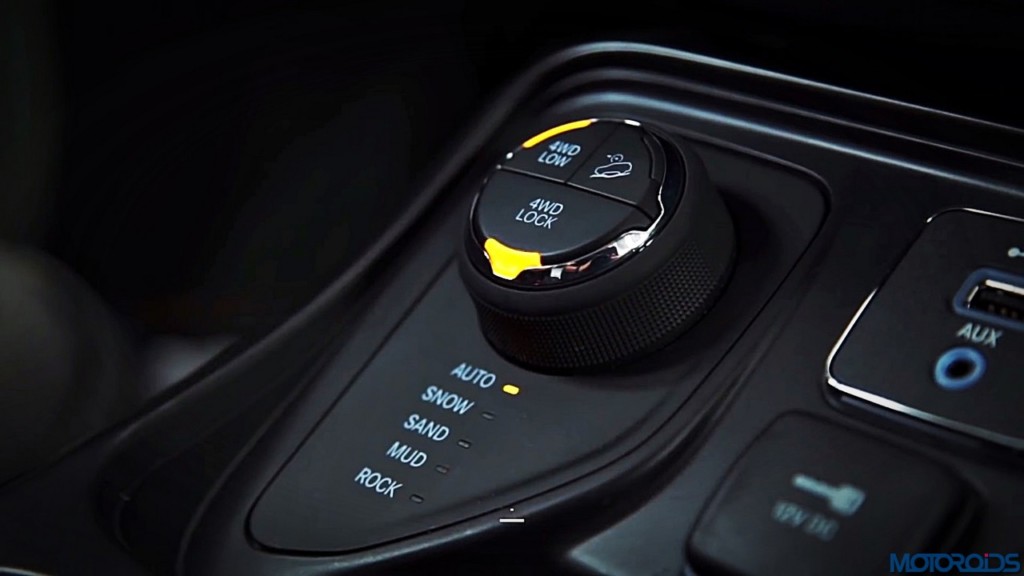 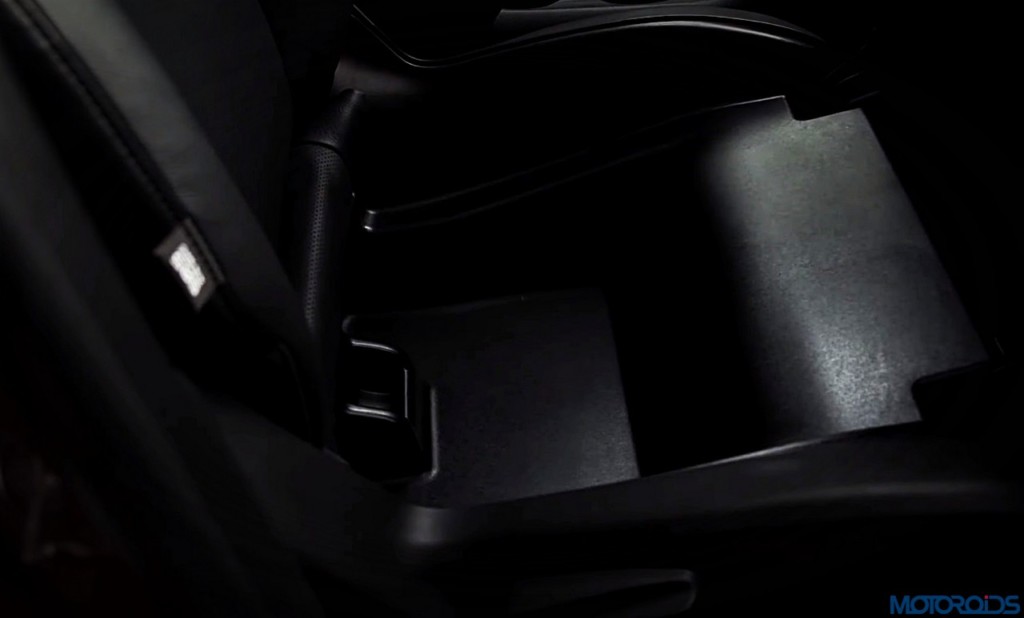 Unique to the Compass is an under seat storage under the front passenger’s bottom, accessible by lifting the front seat cushion. 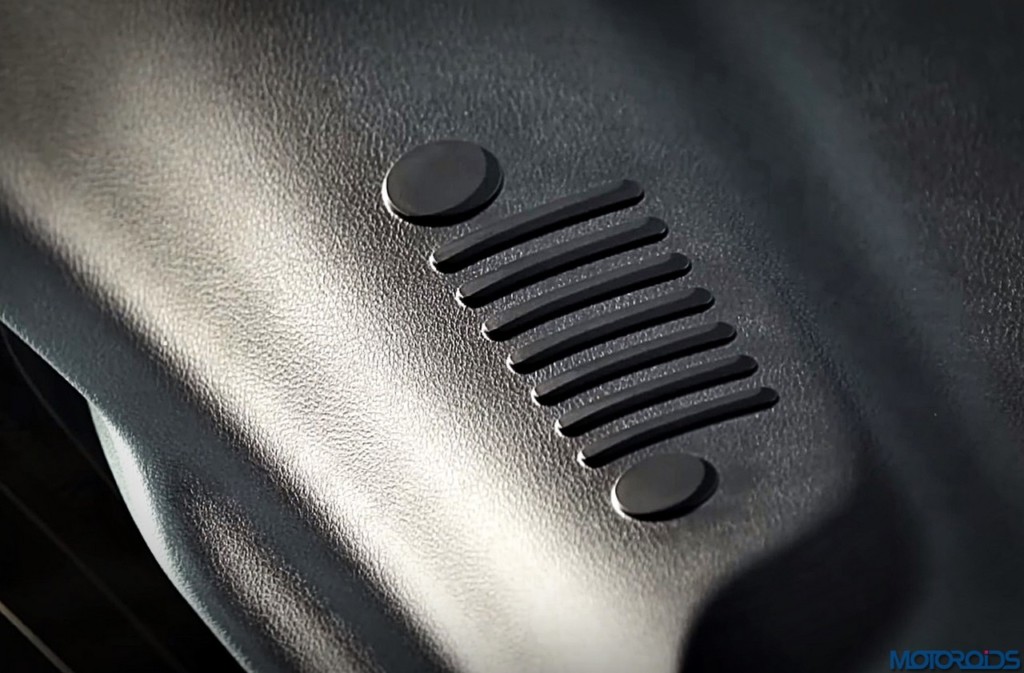 Jeep is in the details. 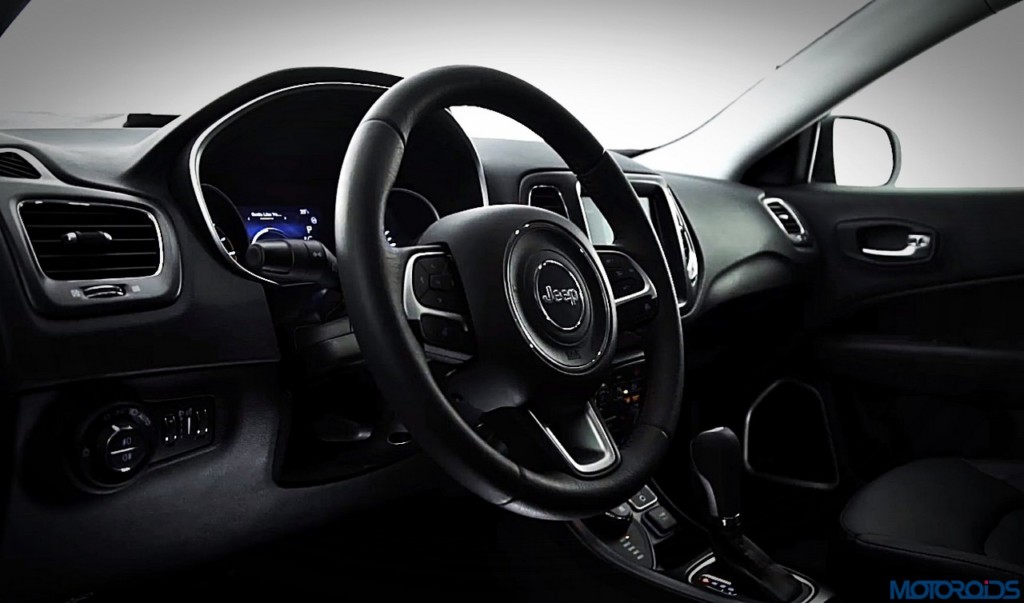 Other notable comfort and convenience features on the 2017 Jeep Compass (refer gallery below) include a powered driver’s seat, automatic climate control with rear AC vents, an engine start/stop button, a sound system by Beats Audio and a multi-function steering wheel.  A host of safety and technology offerings will be on board the Compass as well, including Adaptive Cruise Control, Park Assist with rear view camera and seven airbags. 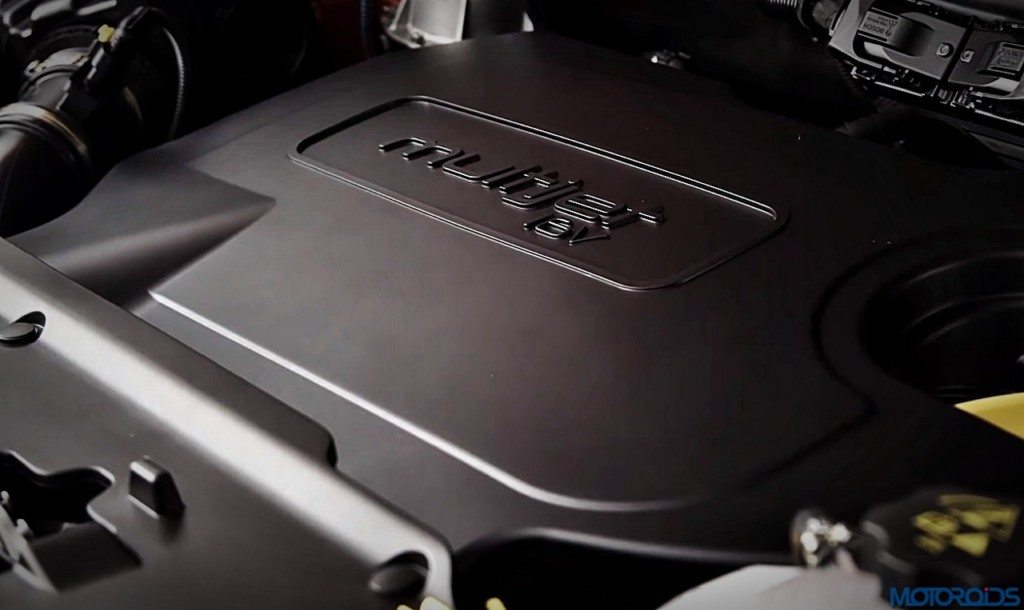 The global compact SUV, based on Jeep’s Small Wide platform, will be produced with 17 power-train options, including FCA’s Multijet 2.0-litre, 170-odd bhp strong diesel engine mated to a 9-speed automatic transmission and the aforementioned Active Drive II 4×4 system. Expect this power-train to be employed in the India-spec model, while in Brazil, the Compass will be powered  by a 2.0-litre flex-fuel engine mated to either a manual or a 6-speed automatic transmission.