Home Chevrolet Is this the 2016 Chevrolet Corvette ZR1 engine? 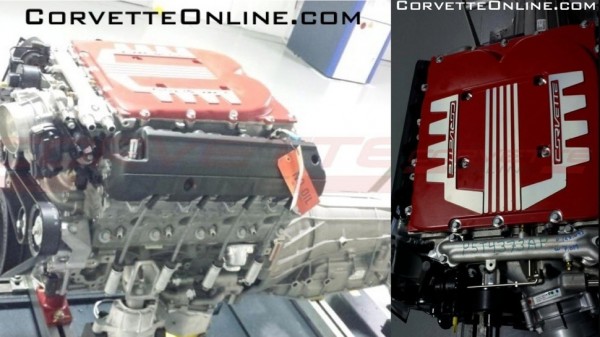 Seen here is a pic that might of be of the 2016 Chevrolet Corvette supercar’s supercharged V8 motor.

Here is exactly what the source said-

The engine in the photos is definitely an LT1-style, Gen V Chevy small block, as evidenced by the injector cover shape and the fact that the throttle body is consistent with the ones used on the C7′s LT1. And it’s clearly a twin-rotor supercharged engine with the LSA/LS9 style pulley mounted high on the front, and intercooler plumbing also bearing a resemblance to previous heat exchanger setups.

However, what we son’t know is the power output of the upcoming motor. The C6 Z06, powering which is a naturally aspirated engine, offered its driver 505 horsepower to play with. The 2016 Chevrolet Corvetter, though, could get close to 670 horsepower, enough to scare the Italians on an autobahn we reckon.

Not much is known about this motor or the 2016 Corvette but safely expect us to update you with more details as soon as we get our hands on some.