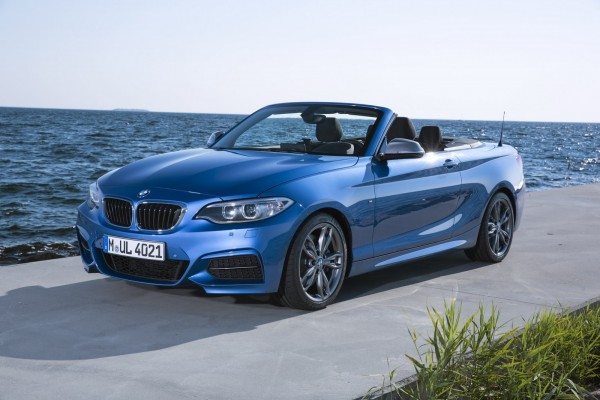 The all-new, 2015 BMW 2 Series Convertible has been revealed. Set to replace the old 1 Series Convertible and fight it out against the Audi A3 and S3 Cabriolets, it is built atop a chassis closely related to that of the 3 Series and it is available as a rag-top convertible. 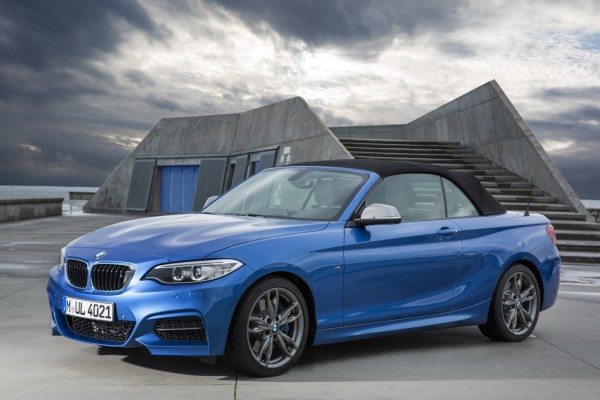 A derivative of the 2 Series coupe, the 2 Series convertible is a bit larger than the outgoing 1-series drop top, being about 3.5 inches longer and a full inch wider- which translates to a heavier curb weight, but frees more room on the inside. 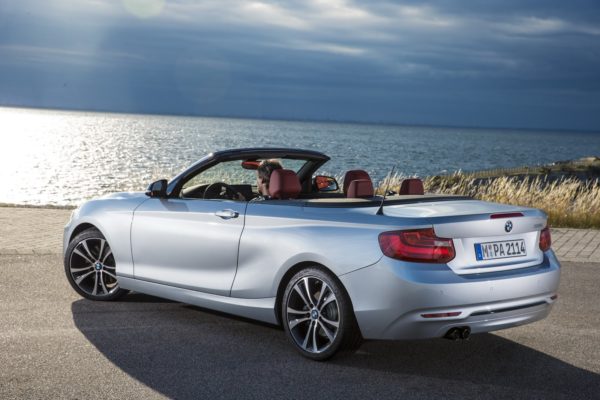 The 2 Series Convertible continues with a foldable canvas soft top, which can be stowed away at the back and eats considerably less space than a complex, heavy foldable hard-top mechanism. BMW says the interior is quieter with the roof raised thanks to additional insulating layers, and it can fully actuate in both directions in 20 seconds and at speeds of up to 30 mph. It’s available in a choice of black, gray with metallic fibers, or brown with metallic fibers. All this adds approximately two to three hundred pounds of weight over the stock coupe. 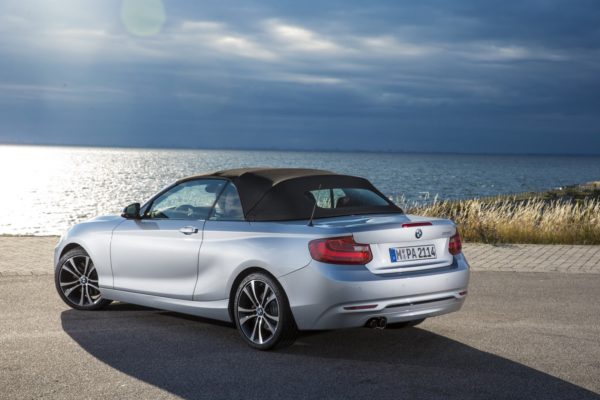 The 2-series convertible comes with a choice of two longitudinally mounted engines: A 240-hp, 255-lb-ft 2.0-liter N20 turbocharged four cylinder motor in the 228i, and a 3.0-liter turbocharged N55 inline-six cylinder motor  dishing out  320 horsepower and 330 lb-ft. of torque in the M235i. The 228i, armed with the optional xDrive all-wheel drive charges to 60 mph in 5.6 seconds, while the rear-drive variant completes the sprint in 5.8 seconds. An eight-speed automatic is the only available transmission in the 228i. All this paraphernalia adds approximately two to three hundred pounds of weight over the stock coupe. 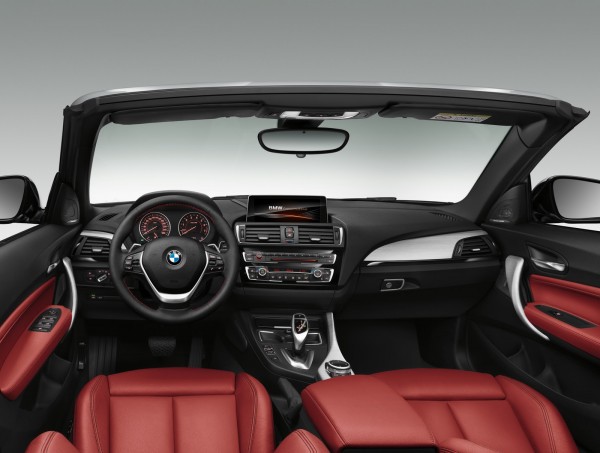 The top-spec M235i- laden with the tasty M kit is claimed to sprint to 60mph in just 4.8 seconds. Not only that, but the M235i can be ordered with BMW’s slick six-speed manual transmission. There will be no all-wheel-drive version available at launch on this model, but it will be offered at a later date. This drive train, combined with the 2’s compact proportions should make for one gloriously playful thing on the road. 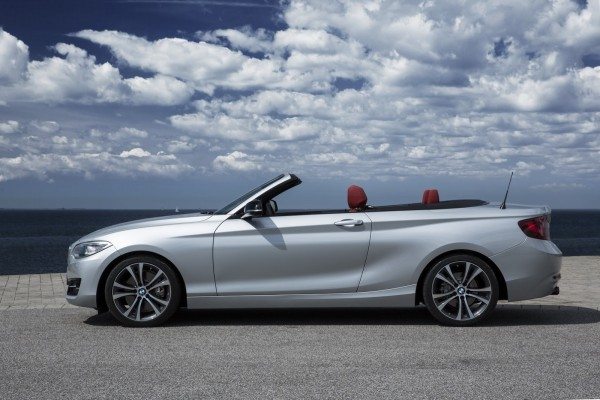 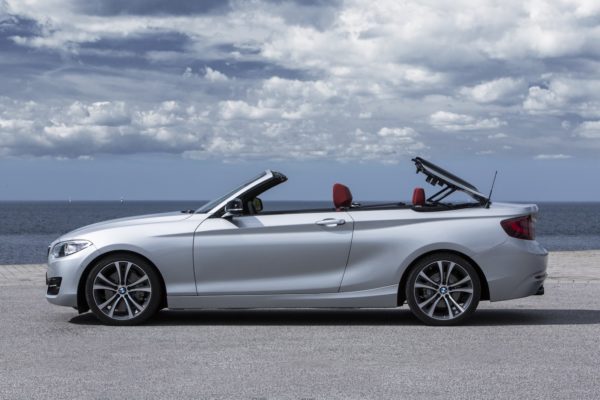 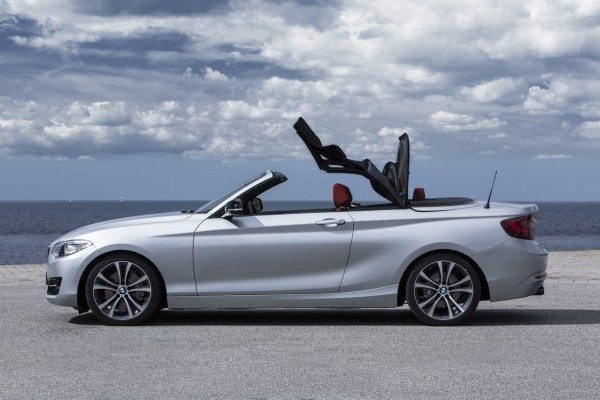 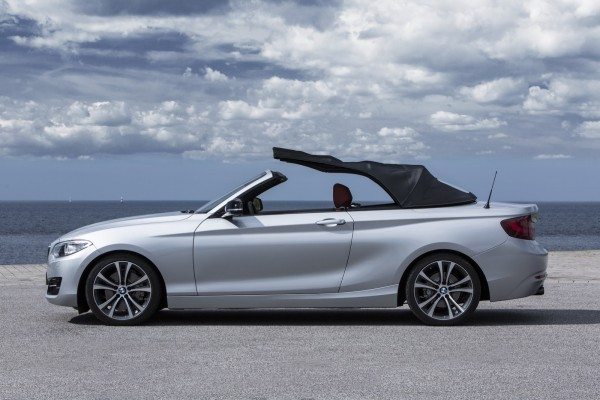 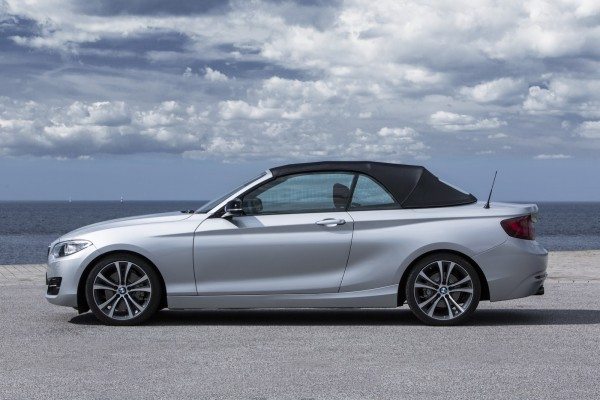 Then there’s a Driving Dynamics Control switch that allows the selection of various chassis modes; this includes an Eco Pro setting that can de-clutch the engine from the driveline when coasting between roughly 30 and 100 mph. The 2 Series Convertible also gets BMW’s iDrive, satellite navigation and over-the-air updates with in-SIM technology. Safety is also expected to mimic the 2 Series, which was recently awarded a five star Euro NCAP safety rating. 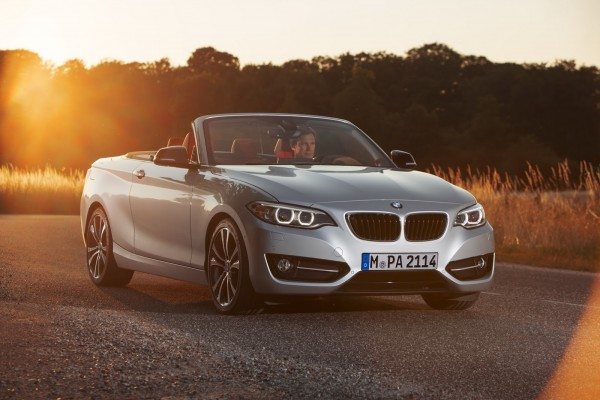 The 2-series convertible will make its real-life, global debut at this November’s Los Angeles Auto show and should go on sale in the U.S. by early 2015.

Head to the gallery below for a set of detailed images of the 2015 BMW 2 Series Convertible.