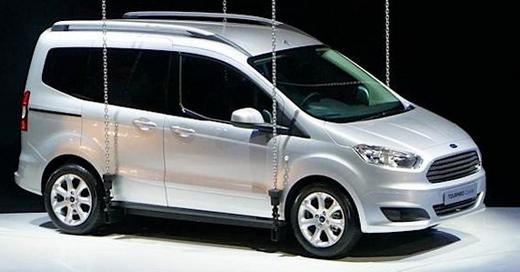 It has emerged that Ford Motor Company will announce the launch of the all new Tourneo Courier minivan at the fast approaching Geneva Motor Show that will be held early next month.

The car manufacturer said in a statement on Friday that the new Tourneo will have its global debut on March 5 at the Geneva Motor show in Switzerland and will be showcased with the European version of the all-new EcoSport compact SUV.

The new minivan was first seen during Ford’s “Go Further” brand campaign in the Netherlands last year and the new Tourneo Courier is based on Ford’s Global B platform that also underpins the new Fiesta and B-MAX.  Ford also plans to showcase the Transit Courier, the commercial version of the Tourneo Courier, at the upcoming auto show. The Transit Courier is a panel van with no rear doors or rear side windows.

Ford will release full details of the new Tourneo at the motor show itself.