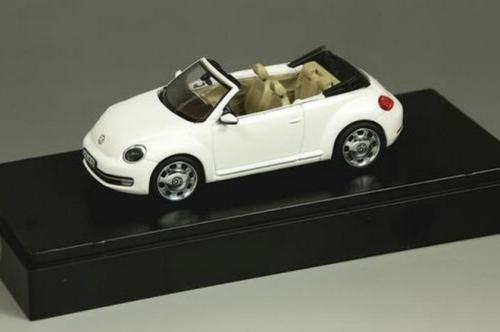 Car manufacturers often come up with unusual ways to introduce their new product to the world. Now, German auto major Volkswagen has revealed the 2013 Beetle Convertible in a toy form!! The images of the convertible were seen on Schuco Modell’s website and the scale model is being called as “Dealer Edition 1/43 2013 VW Beetle Cabriolet Convertible.” In all probability, the car models were created to be given to the dealerships and sold through their in door merchandise shops. The Beetle Convertible will be launched in the US market towards the end of this year and will be offered with three engine options- A 170 hp 2.5-liter five-cylinder NA petrol, a 200hp 2.0-liter four-cylinder TSI petrol and a 137 hp 2.0-liter four-cylinder TDI oil burner.