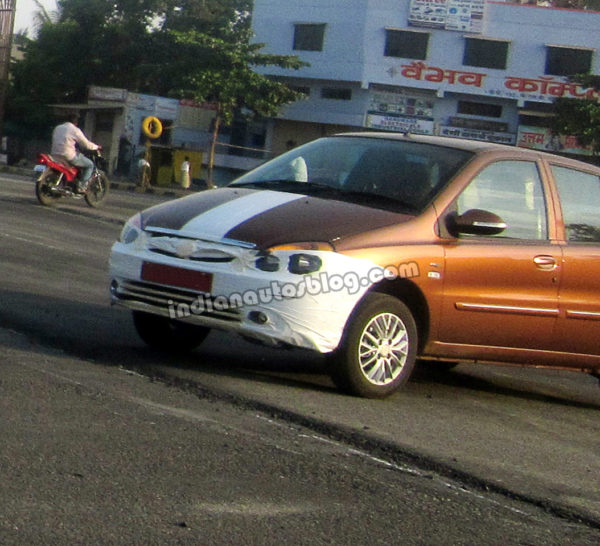 It has become quite a well known fact by now that the boffins at Tata Motors are busy readying a facelift for the highly popular Tata Indigo eCS compact sedan. The car has been spotted testing on numerous occasions and from the looks of it, is just a few days away from its launch. The Tata Indigo eCS can be safely credited for kickstarting the fast heating up compact sedan segment in India, a segment which is the battleground for the recently launched Honda Amaze and the Maruti Suzuki Swift Dzire. In a segment where all the limelight is being hogged by the Dzire and the Amaze, the Indigo eCS silently but steadily continues to post decent sales figures and is the hot favourite of taxi buyers and fleet owners.

The upcoming 2013 Tata Indigo eCS facelift has been spotted testing again. As can be made out from the recent batch of pics, the car sports ‘smoked’ headlamp units and has new design alloy wheels. However, the latest that these pics reveal about the upcoming facelift is that the car will come with a new exterior colour option, that of the ‘Urban Bronze’. It may be noted that Tata Motors has always been regular with coming up with new colour schemes for its Indica/Indigo range of cars and it is hence no surprise that the car maker plans to introduce a new colour option with the facelift. The ‘Urban Bronze’ is also being offered by the car maker on its Tata Safari Storme SUV.

It is being said that the upcoming car will also come with rear parking sensors and a chrome strip on the bootlid. Other than the new smoked headlamps, the front end is also expected to get a revised grille and a new bumper. There are also good chances that the revised headlamps would sport projector units.

On the inside, the car will get minor update like a dual tone color scheme and an upholstery change.

It would be interesting to see if the upcoming Tata Indigo eCS 2013 facelift would affect the sales of the Dzire and the Amaze, which retail for a lot more dough.