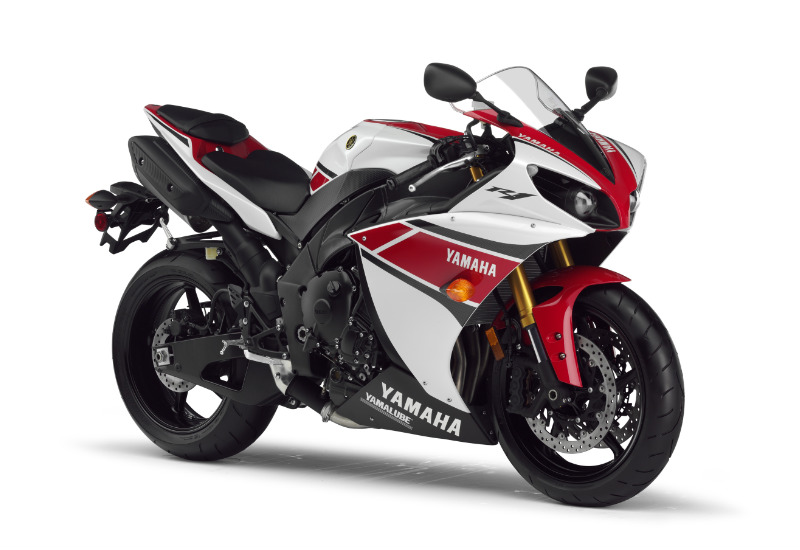 Yamaha have unveiled their 2012 version of the flagship R1 liter class superbike. In its latest 2012 avatar, the R1 gets a cosmetic makeover along with new electronic gadgetry.

On the visual side, the new R1 gets a new headlight cowl, a new exhaust muffler with redesigned heat shield. The 2012 R1 also gets all-new LED front lamps. In addition to all this, the YZF-R1 also gets a new top triple clamp which draws design inspiration from the company’s MotoGP going M1.

On the technical side, the R1 now gets Traction control System, a brand new ECU. The new six way Traction Control System is now a standard feature, and along with the three-level D mode throttle response control, gives the riders as many as 21 different modes to choose from. The 998cc engine for the bike with its uneven firing order and underseat exhaust remains the same.

Yamaha is also offering a “World GP 50th Anniversary Edition” that features Yamaha’s pearl white/rapid red livery along with a 50th Anniversary emblem on top of the fuel tank. This would be a limited edition bike with only 2000 units slated to be produced. Every bike will have a special numbered plate showing the production number. Gold Yamaha badges and MotoGP inspired graphics will complete the look for this special edition.

The new R1 will hit the showrooms worldwide in October. Buyers will have the luxury to choose from four colours – Raven, Pearl White/Candy Red, Team Yamaha Blue/White and the 50th Anniversary Edition. The price for the standard bike in the US would be $ 13990 with the special edition costing $ 500 more.

Yamaha R6 will remain unchanged for 2012 but will be available in the 50th anniversary colors. Here are some more images