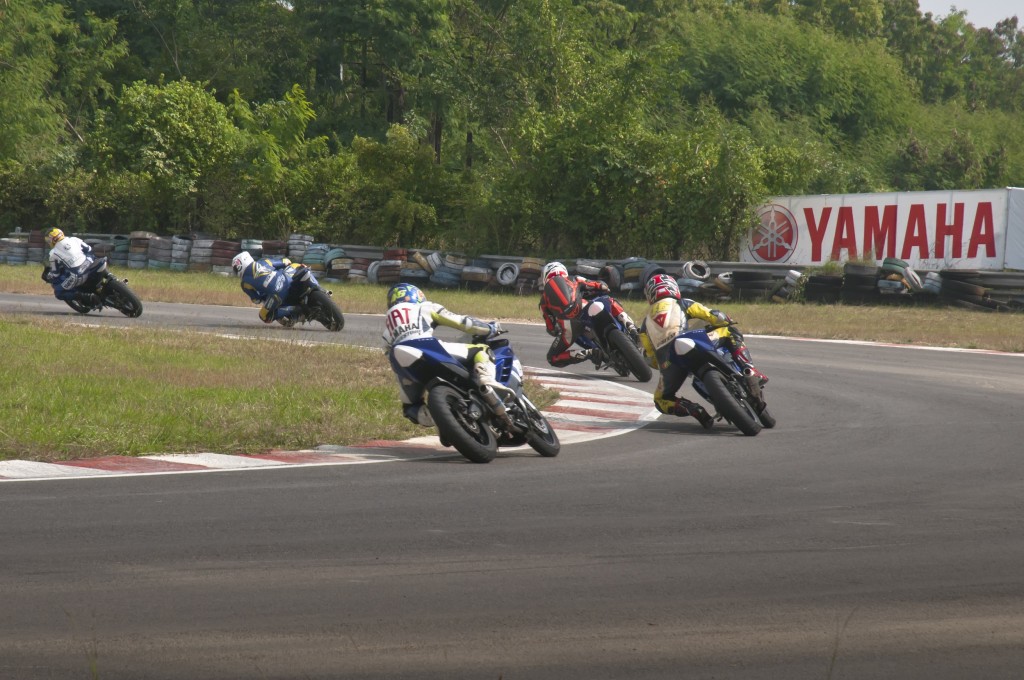 The 2012 MMSC-SIDVIN FMSCI Indian National Motorcycle Racing Championship came to a close today with 22 action packed races over the weekend to finish what was a fantastic season for two wheeler riders in India. While some of the titles were already decided coming into the final round at the MMRT, the was plenty still to vie for as riders battled it out for the final honours in what has been the biggest year of the championship till date.

In the Group D unmodified class upto 130cc bikes, Kamlesh Thakkur from Jalgaon of Team Sparks Racing clinched the title in the last round but didn’t sit back as he dictated terms once again with a win and a 2nd place finish in the final round. Ramesh Kumar took an impressive win in Race 1 but it was Abdul Wahab and K Y Ahmed that completed the top 3 in the Championship.

Ramesh Kumar of MotoRev India held a 7 point advantage over Performance Racing’s Sandesh P going into the final round and the former finished the weekend with two 2nd place finishes to crown him Champion of the Group D unmodified class upto 165cc. Chennai’s Arun Muthukrishnan put in the rides of the weekend with two wins in the class to steal 2nd place in the overall Championship from Sandesh P who ended the season in third.

In Group B’s fully modified bikes upto 165cc, K. Jagan from Chennai of TVS Racing, was crowned Champion last time around but that didn’t stop his domination as he took a win and a 2nd place finish to further increase his overall lead. His teammate, Harry Sylvester took a race win and a 2nd place finish as well as he cemented 2nd overall in the Championship followed by MotoRev India’s Shyam Shankar.

The Honda MMSC One Make Championship saw its premier category, the CBR 250cc class, go down to the wire between the two MotoRev India teammates but in the end it was M Gautam who did enough to hold off A Prabhu and take the overall title. Sarath Kumar dominated the weekend’s two races but it was not enough to challenge the top two and he finished the year in third place.

The Honda CBF Stunner class saw Trichy’s S Madhna Kumar take the race win in Round 5 but it was Chennai’s S Padmanabhan who did enough with a 3rd place finish to win the 2012 Championship ahead of Hyderabad’s Vivek Mani and Tamarai Kannan from Chennai.

While Shyam Shankar of Chennai had already clinched the Yamaha MMSC One Make Championship YZF R15 Open category, the battle for 2nd and 3rd were still up for grabs. Shyam increased his advantage with a win in race 2 and while M Sudhakar made an immediate impact with a Race 1 win, it wasn’t enough to take 2nd overall from Dinesh Kumar.

The Novice category for the YZF R15 saw Sandesh P tied on points with R Ramesh Kumar from Chennai going into the final round and it was the latter that came away with the spoils with a win in Race 1 as well to clinch the 2012 title in fine style to add to his Championship win in the Group D unmodified class. Sandesh finished 10 points behind with Arun Muthukrishnan taking 3rd position by virtue of more race wins after being tied with Rahul Rathod.

In the TVS MMSC One Make Championship novice category for the Apache RTR180cc, 10 points separated the Top 3 of Abdul Wahab, MD Intekhab Alam and Rahul G Rathod coming into the finale and the riders left nothing to chance. A win in Race 1 to Intekab Alam ensured he was in the title hunt and a pointless finish in the final race for Abdul meant that he and Intekab finished with equal number of points at the end of the season. By virtue of more race wins however, it was Abdul Wahab who was given the title of 2012 Champion with Rahul Rathod following the pair in third!

In the Apache RTR180CC open category P Ananth and Rajesh Rathinakumar were only separated by 1 point going into the final race of the weekend but a heavy crash for Rajesh in one of the earlier races meant he couldn’t mount a challenge for the title. Ananth Raj however, dominated the final outing and with it, clinched the 2012 Championship as well.