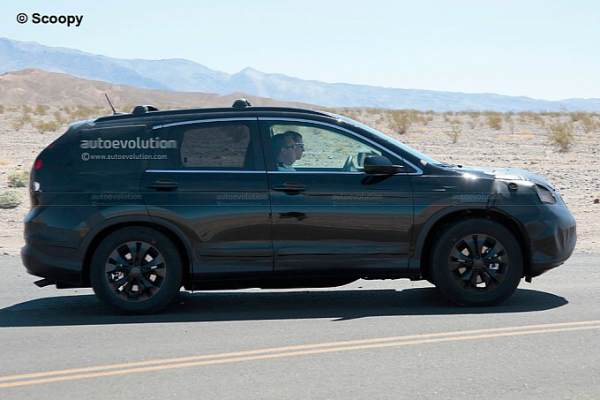 Only a few days back we showed you the spy pictures of the upcoming 2012 CR-V crossover, from all angles possible. The globally popular crossover has now been caught one more time doing hot weather testing in Death Valley, California.

The new CR-V, shot in profile, clearly shows its longer wheelbase and overall length. With so much space left behind the second row of seats, we cannot imagine anything else, but a third row. The new set of pictures only further corroborates the theory that in its latest iteration the popular Honda machine will spawn a third row of seats for added utility and wider appeal.

Engines, as far as the reports go will remain the same with minor tweaks. The 2.4-liter i-VTEC will be tuned to deliver a tad more power and fuel efficiency. The 2.2-liter I-DTEC diesel engine too will more or less remain the same. When the car arrives in India, sometime in 2012, hopefully, we’re sure that it’ll sport the diesel mill as well. Honda must have realized by now that with burgeoning competition in the segment, the CR-V even with all its qualities, cannot sell without an oil burner under the bonnet.

The latest spy pictures of the car reveal a pair of roof rails, positioned transversely. Quite a unique bit, that! The pictures also show the enormous tail-gate of the crossover, almost completely undisguised, and reveal the low loading lip for the boot area.

The new CR-V is sexpected to come loaded with additional tech and features. The Japanese carmaker plans to take the game forward with the next generation of one of its most successful products. No official word from the company has come out except for a teaser on its global website. We’re watching this baby very closely though. Stay tuned for updates.