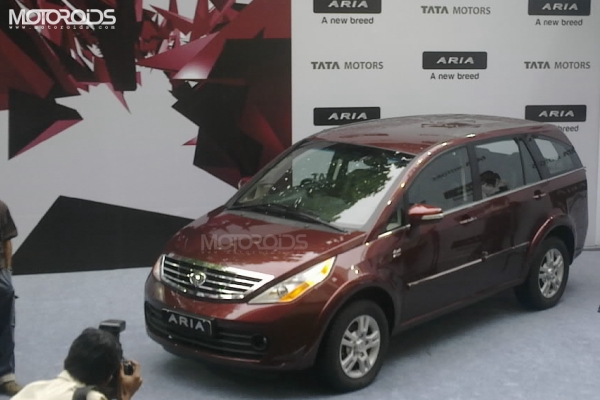 The 2011 Tata Aria 2.2 DICOR Adapterra has been launched in Mumbai today. The Aria will be available in three variants – Pleasure, Pride and Prestige, in eight exterior and three interior colour options. The bookings will commence tomorrow onwards and deliveries will start immediately. The prices are as follows:

All prices are ex-showroom Delhi

Is the Tata Aria worth the money? Read our extensive Tata Aria road test review to know more…

Here’s what we reported from the launch:

– The Q & A Session begins. No update yet on the price…

– Its raining in Mumbai and the Tata Aria launch cars are standing in the open. Photos will come later…

– The two tone interiors are available in three color options – Black/Plum (shown below), Black/Black and Black/Beige.

– The 4×4 AWD will be standard across all the three variants – Pleasure, Pride and Prestige

– The Tata Aria is the first  Indian crossover

– Mr. Debashish Ray is addressing the media, Press Con begins– It seems there is going to be no fun and frolic that one generally witnesses at such functions