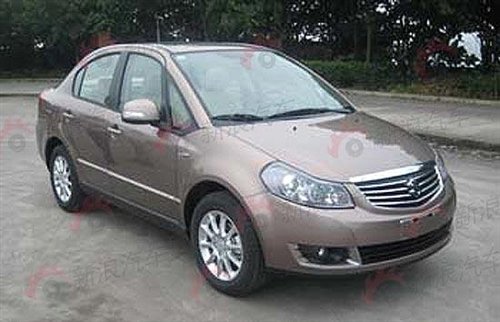 The same Chinese website than unveiled the scoop shots of the 2011 Nissan Micra Sedan, has also managed to get the scoop shots of the 2011 Suzuki SX4 facelift which will go on sale early next year in China. The facelift car gets design tweaks to reflect the new familial design theme which is now seen on the Kizashi sedan and the 2011 Suzuki Swift. The headlights retain their shape but are less curvier in the facelift model. The taillights too get an overhaul. The bumpers now get the Kizashi-esque creases and the honeycomb grille is replaced by a horizontally slotted chrome unit. The interiors will get minor tweaks too and some features are expected to be added. The facelift model is expected to come to India by March next year to tackle the increasing heat from the new competitors like the Volkswagen Vento and the upcoming Nissan Micra sedan. Also on offer could be the 90hp VGT 1.3-litre Multijet diesel engine from the FIAT Linea.