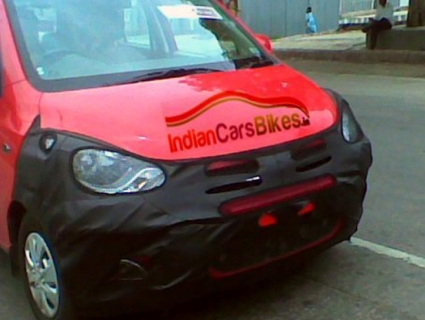 Thanks to the blokes at IndianCarsBikes, we now have access to even more scoop photos of the 2011 Hyundai i10 facelift. While we already knew that the facelift model will get new headlights, taillights, bumpers and ORVM maounted turn blinkers, these new images reveal some engine details as well! When you see the side-profile photos of camouflaged car (check them out on the next page), you’ll see the ‘VTVT’ badge in place of the older side mounted turn blinkers. The 1.1-litre iRDE engine that powers the current i10 is expected to be replaced by this new 1.0-litre, VTVT engine which we expect to be an evolution of the ‘Epsilon’ engine line-up from Hyundai. The 1.2-litre Kappa is expected to remain unchanged for now. Head over to the next page to see more photos of the 2011 Hyundai i10 facelift, testing in and around Pune.