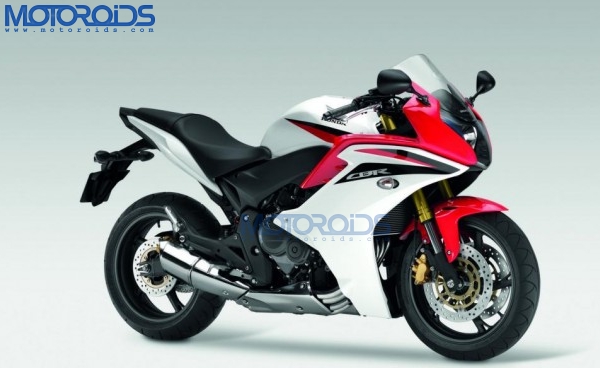 Amongst the CrossTourer, Crossrunner and CB1000R motorcycles, Honda has suddenly slipped in a surprise – the Honda CBR600F! Yes, the ‘F’ nomenclature is back for Honda’s middleweight category and how! The CBR600F uses a 599cc liquid cooled engine that produces a 102hp @ 12,000 rpm. The torque output is claimed to be 64 Nm at 10,500 rpm. Fuel is fed to this engine through 36mm throttle bodies. The engine is fit within a twin spar aluminium frame and damping is provided by 41mm inverted forks upfront and a 46mm mono-shocker at the back. The CBR600F uses twin 296mm disc up front with an optional anti-lock braking system. Tyres come in the industry standard sizes of 124/40-R17 for the front wheel and 180/55-R15 for the rear.

The CBR600F lineage has been known to be a potent all-round machine and not as hardcore as the race replica CBR600RR that debuted in 2003. The CBR600F offers comfortable riding dynamics for sport riding as well as sport touring thus making it a hot favorite amongst riders who are not too inclined towards track days / racing. Since most motorcycle enthusiasts in India too lie in this category and given the fact the litre-class bikes available in India are too over the top – both in terms of power and price, the 2011 Honda CBR600F unveiled today at the 2010 EICMA could prove to be a great middleweight motorcycle for India. It will not only reward the riders with controllable power, it could also prove to be a cost effective alternative to the other middleweights lined up for India – like the Hyosung GT650R, the KTM 690 and the Kawasaki Ninja 650R. Honda hasn’t announced the pricing yet for the 2011 CBR600F but we expect it to be announced soon. Whether Honda India looks at the CBR600F as a worthy product for India, remains to be seen. We are keeping our fingers crossed and we know you are too…