Home News 13th Raid-De-Himalaya to be flagged off on October 11 from Shimla! 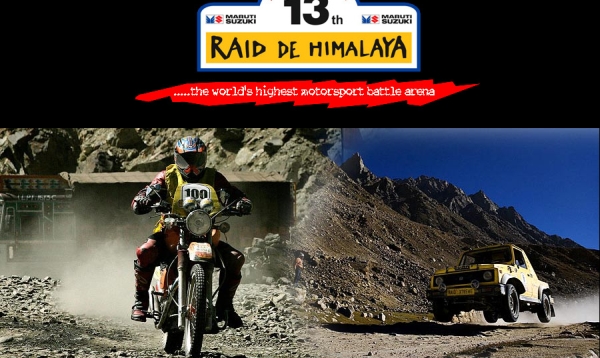 The 13th Raid-De-Himalaya motor rally is all set to be flagged off on the 11th of October, 2011 with a 2,500 km route which will cover some of the most rugged terrains in the Indian Himalayas. Vijay Parmar, president Himalayan Motorsport said that the cross-country motor race which combines transport and competitive sections will be conducted in two categories, X-treme and adventure. The event is expecting more than 150 teams that will take part including Team Thunderbolt, Team Eagle Motorsport, Team Army Adventure Wing, Team Air Force and Team Maruti in the X-treme category. Himalayan Motorsport is the association with which the motor rally has been associated with since the last 12 years.

The adventure class will see teams from Tata Motors, Mahindra and Maruti. This year’s Raid will also witness the first-time participation of Anurag Bareja, a paraplegic competitor. Mr Parmar commented, “His participation will be at par with other competitors in a modified hand-controlled car.” This year too will be filled with as much juice as last year with the participation of veteran 5-times winner Suresh Rana from Thunderbolt, last year’s winner Major Arminder Brar and well known driver Sunny Sidhu. Team Contiger Austria would be competing with 5 motorcycles and would also have Rajeev Khanna, a veteran of Himalayan Rally fame, as a participant in the motorcycle category.

The rally will have its first leg for the X-treme category through Shimla, Mandi and Kullu with a night stopover at Manali after which the second leg would cross over the mighty Rohtang along with a long drive and a halt at Leh. After this, the rally will cover several routes including the 18,300 feet Khardung-La which is the highest motorable road in the world. The routes will pass through Kargil, Rangdum, Penzi-La and will conclude at Srinagar on the 16th of October. On the other hand, the Adventure Trial category will have a route passing through the districts of Shimla, Mandi, Kullu, Kangra, Chamba, and would enter Jammu & Kashmir through Bhaderwah, passing through Kishtwar, Kokernag and Ananatnag. It will then continue through Srinagar, Kargil, Rangdum, Dras, Kargil, Zozi-La and will return all the way to Srinagar for the conclusion on 16th October.

The motor rally has given importance to ecological concerns due to which the organizers have introduced sound regulations as per European norms for this year’s Raid. The sound emission norms will be implemented strictly with the use of sophisticated sound monitoring equipments.