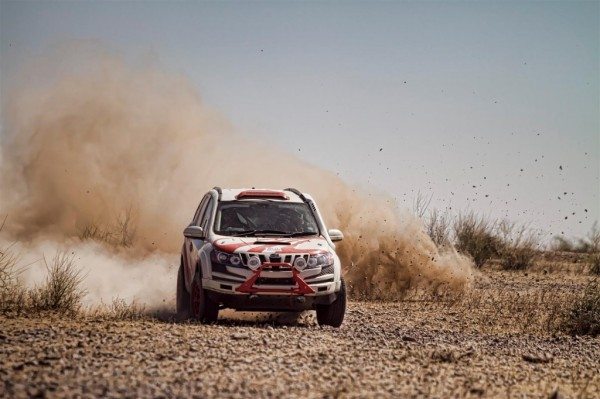 The 100th Mahindra Great Escape, one of India’s most popular off-roading events, recently concluded at Manvar, near Jodhpur in Rajasthan. The event saw over 65 participants in Mahindra SUVs and the Annual ‘Invitation Only’ Great Escape received an overwhelming response from invited dignitaries, which included CEOs of domestic and international auto component companies and agencies, some Bollywood celebrities and journalists amongst others.

Mahindra SUVs dealt with 45 kms of steep inclines, shifting slopes and undulating sand dunes, leaving everyone all excited and wanting for more.

This exclusive annual edition of the rally was exclusively by invitation and saw various eminent personalities enjoying taking Mahindra SUVs off the road. Participating vehicles included the Mahindra Thar, Bolero, Scorpio and the Scorpio Getaway. The terrain consisted of steep inclines, shifting slopes and treacherous sands.

Participants also got a chance to see some great driving by the Mahindra Adventure Rally Team drivers, Gaurav Gill, Sunny Sidhu and Lohit Urs, in the Super XUV and the Super Thar.

Speaking on the 100th edition of the Annual Mahindra Great Escape, Dr Pawan Goenka, President, Automotive & Farm Equipment Sectors, Mahindra & Mahindra Ltd. said, “We were delighted to host the 100th edition of the Annual Great Escape at Manvar. Rajasthan has been a very popular destination among off-roading enthusiasts not only for its terrain but also to show our customers the tough and enduring nature of Mahindra vehicles. Over the years, the Great Escape has developed a reputation as one of India’s most thrilling off-road events and this year’s edition was no different as it put both man and machine to test”.
This landmark edition of the Annual Mahindra Great Escape received a befitting royal welcome in Manvar, amidst the majestic splendours of Rajasthan. Known for tales of valour, chivalry and honour, Manvar is deeply rooted in the Rajput legacy. Flanked by the ruthless desert and the magnificent sand dunes, Manvar was all set to take on a journey through a path laid by the legends.