One look at the XUV 500 and it’s hard to believe something that weighs 1.8 tonnes can be transformed into a rally car. You might not feel surprised about the transformation if you are a fan of those movies, where metal loves being friends with humans. However, the fact that a car like the XUV 500 will dominate the rallying scene in India is definitely a pleasant surprise. 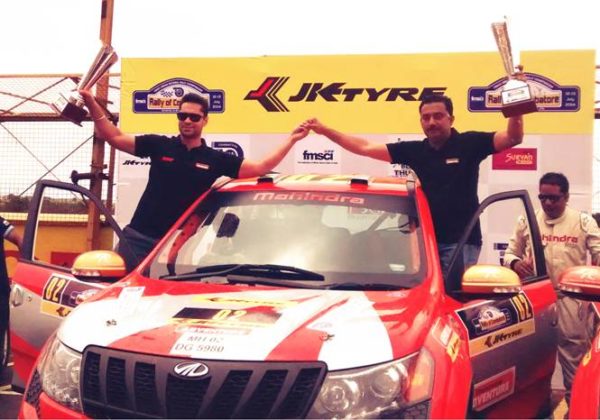 Mahindra’s XUV500 continued its domination at the ‘Rally of Coimbatore’, as Team Mahindra Adventure, won the 2nd round of the Indian Rally Championship (IRC). Having made a thumping start in the first round of IRC, the Rally of Maharashtra, Team Adventure now enjoys a commanding lead in the championship with the first and third positions in the Rally of Coimbatore. Current APRC champion Gaurav Gill and co-driver Musa Sheriff finished first, followed closely in third by teammate Sunny Sindhu and co-driver PVS Murthy.

Speaking on the occasion, Mr. Vivek Nayer, Chief Marketing Officer, Automotive Division, Mahindra & Mahindra Ltd. said, “This unprecedented victory by the Mahindra vehicles is a testimony to the tough and rugged ‘Mahindra DNA’. We were tested against the vehicles which are petrol based but have emerged undefeated yet again. Having been adjudged fastest amongst all categories and winning top positions in the first round of the Indian Rally Championship, we are proud to be the fastest in the second round at the Rally of Coimbatore, as well. Time and again our vehicles have proven their mettle against the competition and we will continue to do so in the rest of the upcoming IRC season this year.”

The Rally of Coimbatore, the second round of the FMSCI Indian Rally Championship 2014 saw 36 participating cars that drove through two main stages—LMW Road (26.10 km) and the Mettupalayam Road (12.65 km). All the cars compete in each stage twice on day 1 and once on day 2 to cover the entire rally distance of 360 km of which 120 km was part of a super special stage on the Kari Speedway track.

The cars were flagged off every two minutes from the Kari Motor Speedway, after which they proceeded towards the famous windmill stages in and around Kethanur. As part of safety precautions, GPS tracking systems were fitted into every car to check their speed and their routes.
The championship included six stages. While the first stage was held at Nasik, the second stage was held in Coimbatore. The remaining four stages will be held at Chennai, Bangalore, Calcutta and Chikmagalur in December.