Mercedes AMG, a brand synonymous with badass tyre burning, cloud making monsters, but huge taxations and import duties make these monsters a very expensive affair in our country. So what do you do when you want a similar excitement from your normal everyday Merc? You modify it and make it worthy of an AMG tag. That is exactly what Mubashir did to his CLA 200, which not only has a ton of cosmetic upgrades but some serious mechanical changes to the engine and suspension. The two-litre inline-4 cylinder petrol engine now makes much more than the stock 181 bhp and 300 Nm which were already some pretty good numbers for a car of that size, but not enough for Mubashir. 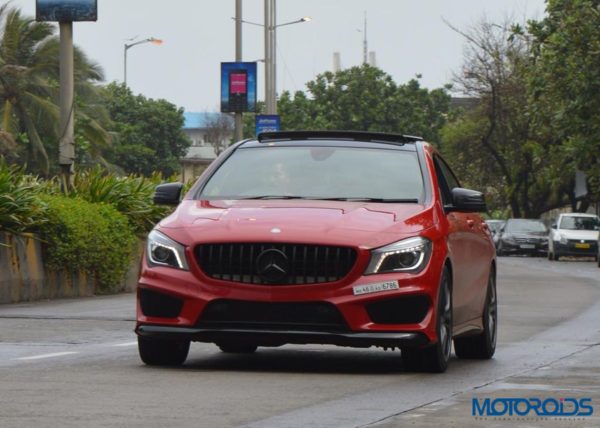 Starting with the exterior, Mubashir got a more aggressive CLA 45 AMG style body kit with an RX Aggressive carbon fibre rear diffuser which adds a nice contrast to the beautiful red paint. Talking about contrast, certain parts of the car, like the grill, logos, roof, taillights and chrome inserts, have been blacked out to follow a red and black paint scheme, which is carried forward inside the engine bay as well. On the side of the car, you’ll see beautiful 18″ Enkei Draco Rims which carry chunky 245/40 section Yokohama Advan Sport tyres. The rear of the CLA gets a carbon fibre boot spoiler which looks nice with the blacked out tail lights. The interior is kept pretty much unchanged with some contrast red highlights across the cabin. 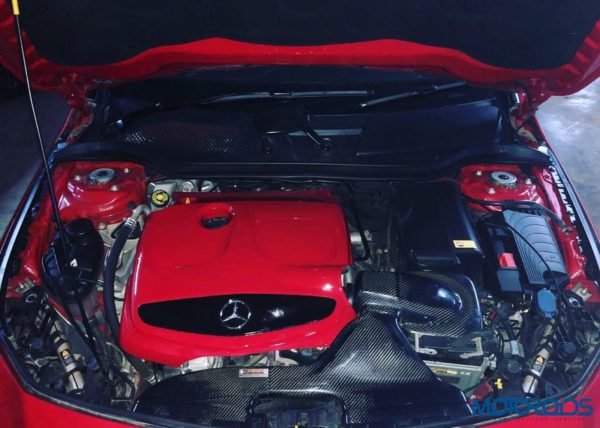 Coming to the main part, the engine, Mubashir has done a stage two Superchips Performance Remap and coupled it with a custom 3″ stainless steel exhaust with a MagnaFlow Racecat & a Borla Spitfire Endcan and an ARMA Carbon Cold Air Intake System. To put all this power on the ground without compromising on the handling, Mubashir installed Eibach Pro-Kit lowering springs and Ultra Racing struts braces, which also give this monster a better stance. This CLA now makes about 275 bhp and 400 Nm torque. To give you a perspective, a CLA 45 AMG which costs more than double the CLA 200 produces 355 bhp 475 Nm of torque. Here are some Images of Mubashir’s pride and joy. Let us know what you think about it down in the comments.