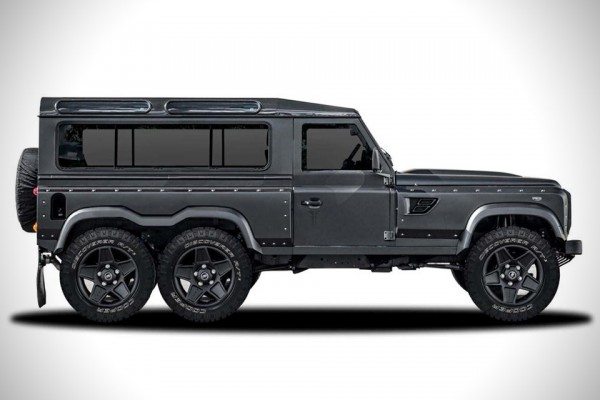 It seems that the world is coming to a point, where your everyday garden variety 4x4s simply don’t cut the mustard. Mercedes-Benz was the first to see that light and they brought out their G63 AMG 6×6. Only 100 examples were produced and all have found buyers. Of course, tuning firms such as Brabus and Mansory have tried their own hands at making this Benz even better and more powerful than the original. But what if you want something that has an air of English charm to it? What if the sensible Germans with their perfectly engineered cars don’t catch float your boat? Well in that case, you might want to have a look at this beast made by the British tuning house Kahn Design. It has been called the Land Rover Defender Flying Huntsman 6×6 Concept. That is a lot of words to swallow in one go, but that’s the name. 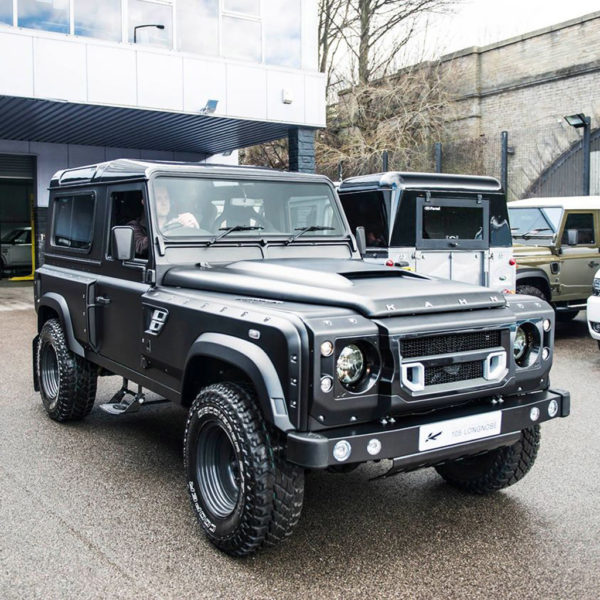 Kahn Design’s 105 Longnose Concept. The 6×6 Defender is basically a stretched version of this car.

Kahn Design used one of their own earlier concept Defenders, called the 105 Longnose Concept and gave it a stretch. The bonnet of the Flying Huntsman 6×6 has been extended by a massive 400mm. This helped the firm to chuck in a General Motors’ sourced massive 6.2-litre LS3 V8 engine, this motor puts out a healthy 430 horsepower. Kahn has not just given this Defender more power, but also, as you can see, given it an extra pair of wheels. This meant throwing in a third axle and that meant increasing the length of this Land Rover by 800mm towards the rear. Kahn Design has also increased the width of this Defender by a further 150mm. We aren’t quite sure about the increase in the width, maybe Kahn did it to just keep this massive thing’s proportions in check. Has it worked? Well, not really. It certainly doesn’t look as appealing as a Mercedes-Benz 6×6, but it doesn’t look bad in any way. Rather, it has a rather dark look to it, in a “I’m a mean and dangerous person” sort of way. 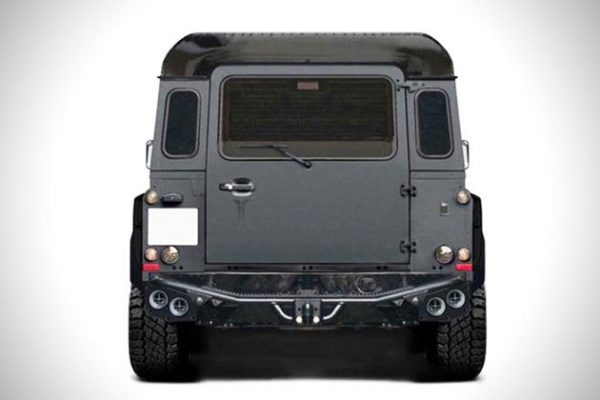 From the back, the Flying Huntsman 6×6 looks rather basic and utilitarian.

Kahn Design has also increased the length of the front doors, which has been done to only to improve “entry and egress”. Because if they didn’t do that, the doors would end up looking tiny in comparison to this really long vehicle. It’s not only the front doors that have been redesigned, the rear door has also been widened to keep up with this car’s 150mm increase in width. Talking of the rear door, this concept looks quite unimpressive when viewed from the back and may end up looking like just another Land Rover Defender. However, Kahn has increased the rake of the windshield and has fitted a giant panoramic roof. This glass roof extends all the way from the B-pillars to the rear of the Huntsman. 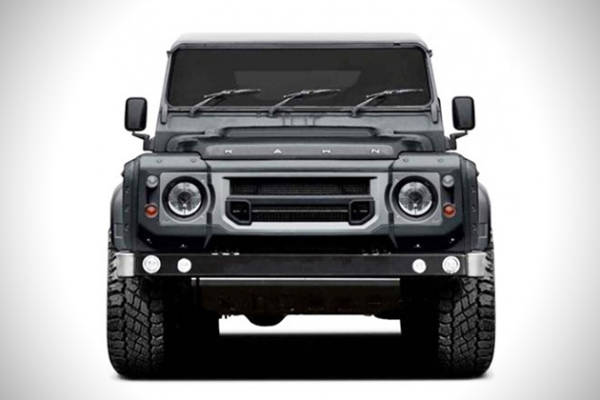 Well, you wouldn’t care about this car’s beauty when you are behind the wheel of it. Talking of which, the 430 horsepower engine, is mated to a 6-speed automatic transmission with something called as Tap-Shift Control. This is basically two gear shift paddles located behind the steering wheel. According to Kahn, the Flying Huntsman 6×6 can “tame even the hardest terrain.” The Flying Huntsman is equipped with a Hi-Lo transfer case and a multitude of locking differentials. Just for reference and to refresh your memory, the 6×6 by Mercedes-Benz has five locking differentials.

Kahn has also made changes to the suspension system and the brakes of the Flying Huntsman, which is always good news on a vehicle of this size. We are curious to see how the change in the dampers and springs will affect this things behaviour on the road. As you might have seen in one of our Mercedes-Benz 6×6 articles, that SUV didn’t really like attacking the bends. It will be interesting to see if Kahn Design has done some wizardry on that front. The British firm is confident that this cliff-sized colossus will outgun any other roadgoing SUV. Hmm, we are not so sure about that but then again, only time can show us all what the Flying Huntsman is truly capable of. Armoured versions of the 6×6 Defender are also under discussion. After all that’s been said, people at this year’s Geneva Motor Show will not leave the Kahn Design stand without clicking a selfie with this Titan. Let us know what you think about the Land Rover Defender Flying Huntsman 6×6 Concept in the comments section.