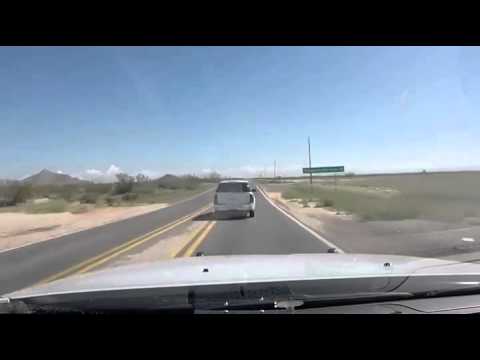 We all come across police chase videos on the interweb quite routinely. However, this one is simply hilarious. A couple of men transporting vast stashes of marijuana, got into a high-speed police chase in the state of Arizona, USA. In the fear of being apprehended with their illegal cargo, the men take turns in flinging off as much of the green stuff as they can. In their desperate attempt to nab these drug transporters, the police, inevitably, give other opportunistic motorists the chance to grab the free stuff that landed on the road.

According to the Pinal County Sheriff’s Office, a routine police stop, lead to this wild goose chase on the highway, with the Chevy SUV and police cars reaching speeds in excess of 160 km/h (100 mph). Eventually, the marijuana-flinging men, ran out of luck and time. The ending came, when the Chevrolet Trailblazer, ran over some cleverly placed spike strips that blew out its tyres. The delivery boys, though, didn’t give up immediately. Instead, they tried their best to outrun the police on foot. But they simply weren’t brisk, enough. When questioned, the men told the police that some woman asked them to transport the green stuff. A ‘service’ for which, they were paid $1000. It would be hilarious to see the reaction of that female, when she finds out that most of her stuff, got caught by the police and the rest were picked up by some random motorists on an highway. Anyway, watch this funny chase video and tell us what you think about it.