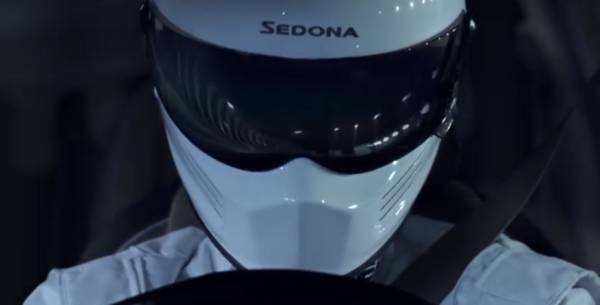 Car commercials are often vague. Sometimes they hit the nail just right but mostly they fail to evoke any responses inside that would make us run to the nearest dealer and meet that salesman wearing an ill-fitting tie. Although Kia cars aren’t sold in India, we came across one of their car commercials which only manages to confuse you, rather than driving the point home. It also features a man and his three other lookalikes. All of them resembling a rather famous man notorious for driving fast cars at their very limit in a TV show.

The car in question is a Kia Sedona going around an oval race track. While the first few seconds suggest a performance machine built for speed, a man suddenly pops your bubble to say, “Its not what you expect, its not a compromise” Then they show a ‘Stig’ look alike fidgeting with the GPS while on a race circuit, another in the backseat admiring an iPad and the one next to him preparing for a nap. A voice then continues saying, “Its not a sports car, its a Sedona.” We aren’t sure what they wish to convey. Maybe they’re trying to say that the car can go fast and still keep you comfortable, maybe they could puzzle Dan Brown too. But if you can decipher their code, do share it with us.