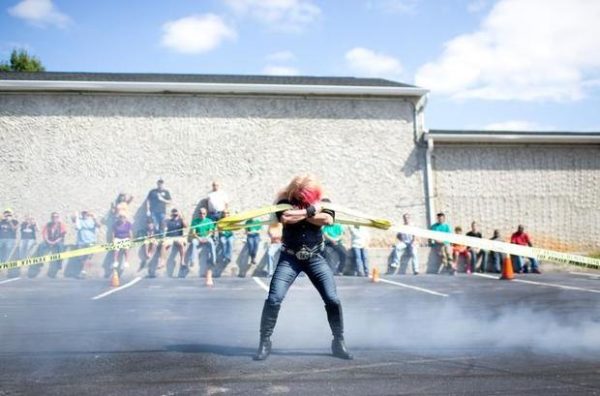 Juli Moody, an Olympic gold medalist, recently racked up yet another Guinness World record for restrain four speeding motorbikes – each pulling with 1,050lbs (almost 480kgs) of force in opposite directions – with her arm muscles. The former Olympic Power Lifting champion broke her own previous record of restraining two screaming Harley-Davidsons by taking it up a nocth and adding two more motorcycles or good measure.

The 37-year old professional weightlifter from California has earned the nickname “The Female Human Link’ thanks to her extraordinary feats of human strength. For this attempt, four Harleys were attacked to her upper arms with special harnesses. The riders then proceeded to rev the nuts off their motorcycles, resulting in a haze of smoke and a whole lot of wheelspin as Juli used just her biceps to keep them from pulling her apart. The whole feat, which lasted just over a minute, was done without applying any brakes whatsoever.

Juli is the official Guinness record holder for three variations of this trick, having performed the feat with one, two, and four motorcycles. According to her website, she is now gearing up to break the Guinness World Record for the heaviest vehicle pulled 100ft by a female, as well as the longest time restraining two Cessna aircrafts by a female.

We are not worthy.