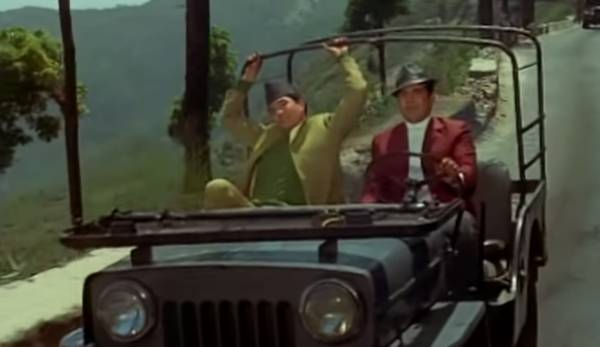 There’s hardly anyone of us who hasn’t seen and heard Rajesh Khanna croon to Sharmila Tagore in a Willy’s as his friend Sujeet Kumar in driver’s seat chases the beautiful toy train through the picturesque, serpentine hilly roads. Recently, while discussing videos to write an article about the shit Indian heroes have done in cars, we watched this song again and observed something interesting. Here goes.

So it appears that for the sake of their ‘spontaneity’ which in other words means the convenience of not having to rehearse anything, the superstars of yesteryears did whatever they felt apt for such largely non-choreographed songs. While it worked well most times, sometimes they did screw up. Rajesh Khanna, who was known for his signature style tried to add his ‘touch of class’ to this song as well, and in the process managed to create hilarity which would likely leave you rolling on the floor.

The video of the famous song follows this post. Jump to 1:53 on the seek-bar and watch Mr Khanna miss the rollover bar as he extends his hand backwards to grab it in his signature style. That’s the hilarious fumble we’re talking about here. He misses it once, looks for it some more and then finally changes the trajectory of his hand to improvise and clutch the vertical bar. That probably wasn’t a big enough goof-up, so he immediately switches over and extends his other had this time, only to miss the rollover bar again. Since this time he doesn’t have the erect bar to grab, he grabs on the driver’s seat.

There are a few other moments of hilarity too. At 1:10, watch the Willy’s Piloted by a visibly inept Sujeet kumar take a left hander. He almost steers the car into the ridge to the car’s left. Rajesh Khanna still doesn’t doubt his friend’s driving abilities one bit, though. So he pops onto the bonnet, jumps, dances and keeps monkeying around, celebrating his freedom in the seat-belt free world he was living in. To punctuate the song, and to erase any doubt about his hazardous driving, Sujeet Kumar cuts across the railway line when the train is hardly a few feet away. Wow!

PS: Our article about shit Indian heroes do in cars is still under deliberation. Do drop in a line if you have a suggestion.