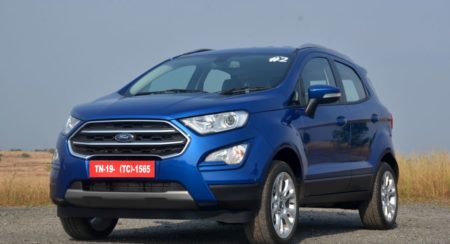 It has been 6 years since Ford launched the EcoSport SUV which has been the company's best selling car ever since. In its latest avatar, the EcoSport now gets a new 1.5-litre petrol engine, paired with an automatic transmission. This is in addition to updates for the cabin and external styling.

The new Ford EcoSport takes inspiration and design cues from the Endeavour's design. It gets a new wider front grille a more aggressive hood. Overall, the Ecosport continues to be one of the most unique and desirable cars in its segment in terms of appearance. Things like the tailgate-mounted spare wheel and a playful stance only help its cause further.

The EcoSport S and the EcoSport signature get sportier styling with a blacked out front grille and a contrasting black roof. Both, the new 'S' and Signature variants come standard with an electronically adjustable sunroof which Ford dubs as the "fun roof" and a different set of 17-inch smoked alloy wheels. The EcoSport extends its sporty theme with blacked out headlamp clusters and fog light bezels as well.

It is inside the cabin where the Ford EcoSport fares better than its rivals. It gets an all-black interior and 7 ambient lighting modes making the new cabin look refreshing. The touch-n-feel of the materials used feel top notch and the cabin feels well built. The car gets an 8-inch touch-screen infotainment system with Ford's latest sync 3 interface and it is without a doubt the smoothest and the most intuitive systems out there. The system is both apple carpaly and android auto compatible.

The Signature and S variants get a 4.2-inch MID display in the gauge cluster and coloured accents and highlights on the dashboard and seats to add a sporty element in the cabin. Other mentionable features include, key-less entry, push button start and stop, voice recognition, steering mounted controls and automatic climate control system. At 352 litres, boot-space is adequate and there is a shelf inside the boot which makes that space sort of modular. The cabin can seat four people in comfort, where the 5th passenger can be accommodated for short to medium journeys. Seats on their own are comfortable and provide great support all around for all body sizes.

The Ford EcoSport comes with dual front airbags, ABS with EBD and Brake Assist, rear parking sensors and driver seatbelt reminder as standard on all models. Higher trim levels offer as many as 6 airbags! In addition to that, the top trim's feature list is a little more elaborate as it comes with rear parking camera and sensors, Ford MyKey, walk away lock, rain sensing wiper, side and curtain airbags and ISOFIX child seat anchorage among others.

The Ecosport is also offered with the highly acclaimed 1.0-litre, 3-cylinder turbocharged EcoBoost petrol engine churning out 125PS at 6000rpm and a healthy 170Nm between 1500rpm-4500rpm. This engine is mated to a 6-speed manual gearbox. The EcoBoost is available only on the S variant, which can also be bought with the 1.5-litre diesel.

In terms of efficiency, petrol variants of the EcoSport are rated for a company-claimed figure of 17 km/l for the manual and 14.8km/l for the automatic. The diesel is rated for 23.00km/l and the EcoBoost petrol, for being the most fun, returns 18kms to the litre. In terms of driving dynamics, the Ecosport is the best vehicle in its segment and like all other Fords, rewards the driver while still keeping occupants comfortable. The high ground clearance also makes it a practical vehicle for Indian driving conditions.