In the virtual world of Gran Turismo, the more ludicrous your car, the better. We had already shown you what Peugeot had to offer and that car was crazy in its own right. Now, the boys… umm, men, from Fiat-Chrysler Automobiles (FCA) have come up with a virtual concept that’s almost out of this world. 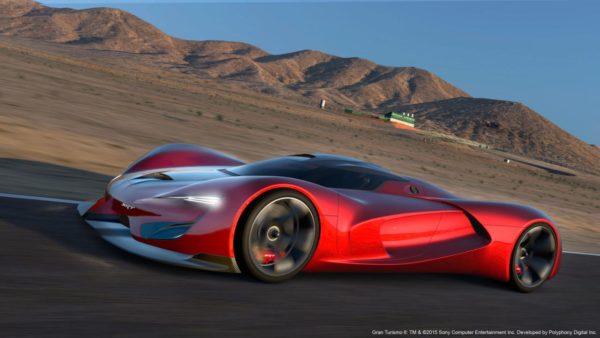 Looks like it came from the future. A very powerful future, at that.

It seems that the designers at FCA weren’t sufficed with having just one powerful SRT Tomahawk. So they went all guns blazing and created three virtual models. The base model is called SRT Tomahawk Vision Gran Turismo S. This mean machine comes with a meagre 7.0-litre V10 that churns out a healthy 792 horses. This is further aided by pneumatically-driven front wheels which further generate 215bhp. The combination of these two separate entities come together to produce 1007bhp. 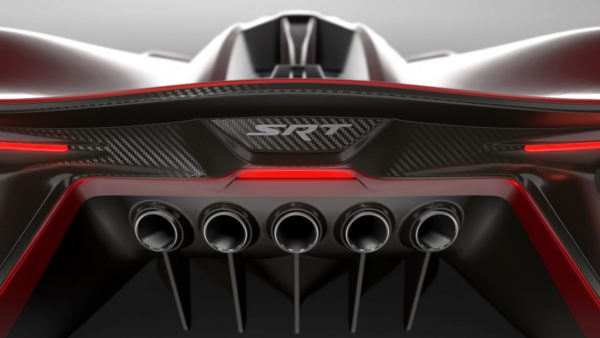 Those exhaust pipes are there for show… sorry, function.

The ‘S’ variant weighs just over 900 kg and that means a top whack of 402 km/h. Amazed? Well, not really right? Don’t fret, as there’s a more powerful version of this virtual SRT megacar. This one is called the GTS-R and it only weighs 661 kg and that means, this second SRT is even lighter than the S. This time around, the same 7.0-litre V10 cranks out 1137 horses. The pneumatic system powering the front wheels now turn up with 313bhp. That takes the total power to an impressive 1450bhp. Combined with its lighter body, the SRT Tomahawk Vision Gran Turismo GTS-R can rocket past 480 km/h! Now that’s neat, isn’t it? Well, this is not the most potent version of this megacar as there’s one more. 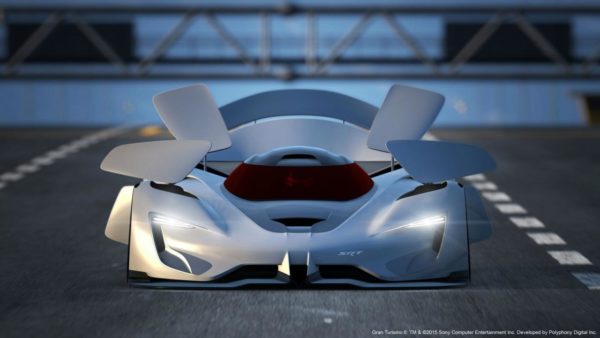 There are tonnes of these aerodynamic aids all over this virtual megacar.

The final variant is the SRT Tomahawk Vision Gran Turismo X. If this thing were real, it could tow a couple of real supercars behind it. How would that be possible you may ask. Well, the thing is, for this X version, the 7.0-litre V10 has been given an increased redline of 14,500 rpm. Mind you, that’s 14,500 rpm from a V10! This time, the powerplant punches out 2168bhp on its own. Those sci-fi pneumatic systems for the front wheels, now deliver 422bhp. For those who are too lazy to do the math, the grand total comes out to a massive 2590bhp! The SRT Tomahawk Vision Gran Turismo X can now do 650 km/h(!) and that’s twice as fast as most supercars (real-world). 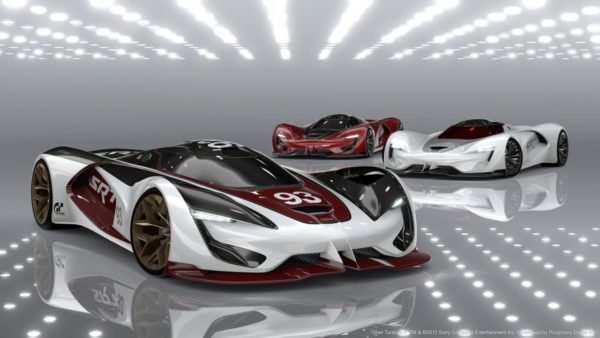 All three are absobloodylutely bonkers! We wish they were real, too.

As you might have noticed by now, all the variants of the SRT Tomahawk Vision Gran Turismo concept have all-wheel drive. However, it’s not smooth sailing for the driver of this virtual speed machine. He/she will have to adorn a G-suit to survive the crushing g-forces. Otherwise, the driver would be plastered and become wallpaper paste. If this thing does become real, don’t expect that to happen any time soon.

We have made a gallery of more images of the stupendous SRT Tomahawk Vision Gran Turismo concept. Check them out below.