Home Features VVIPs to not use car sunfilms. But what to do about this? SC, are you listening? 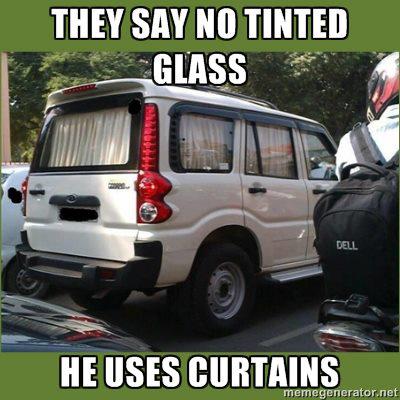 Peel it off! That is what Supreme Court decided to say to those using sunfilms on their cars. It may be noted that until very recently, upto 70% transparency for front and rear windows and 50% transparency for side windows were allowed on cars, but henceforth, even the sunfilms which earlier came under ‘permitted’ category will have to be shown the bin.

“We prohibit the use of black films of any visual light transmission (VLT) percentage or any other material upon the safety glasses, windscreens (front and rear) and side glasses of all vehicles throughout the country”  ruled the apex court.

Traffic police in various cities too were quick to launch a drive to enforce the above stated SC ruling. While many car owners saw the films on their cars being ripped off, they also had to pay a fine of Rs 500. In case, the stubborn among these decided to get the films again, they will have to pay a fine of Rs 1,000 the second time cops catch them.

SC’s logic that tint films make the interior of a car less visible helps criminals escape the law might have some substance, but in a country like India where the temperature soars to as much a 52 degree Celsius in summers, a UV cancelling, heat deflecting coating does help the passengers to an extent.

At 70% transparency, the cabin of a car is sufficiently visible. The real problem here is the manufacture, marketing and usage of substandard and non compliant films by unregistered makers. The police, as one would expect never acts against the manufacturers and suppliers of these films, and even the end user, in a bid to make their cars look cooler opts for them. In our opinion, clear films, which deflect heat and UV to keep the cabin relatively cooler, should be allowed. We earnestly believe that only the removal of such films would hardly go any distance in reduction of abductions and robberies, for criminals would still commit crimes if they have to. More than reducing crime, this ruling may eventually turn into another way for the traffic constables to fleece commuters.

Even VVIPS wuill have to adhere to the new ruling as there currently isn’t any exception made. However, an exception can later be made for the the used by Z and Z+ security covered people.

Now, the point behind posting this story- While it might happen that VVIPs, VIPs, distant relatives of these, and anyone who is distantly related to ‘someone’ end up removing these films, does the law keep force has what it takes to fine these people for the usage of curtains? What about the crime that happens behind curtains? This little observation goes a long way to question the might of laws and police.

What do you say?