Home Features Video: Riding a motorcycle on one of the highest roller coasters in the world 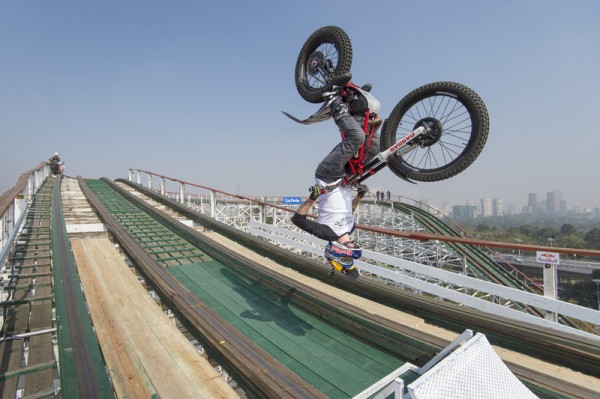 A roller-coaster ride is not for the faint hearted. It throws a collective punch at your face which combines all your fears of heights, speed, gravity and a lot more. Some of the rides though are so extreme, they will shake even the most numb Russian out of his Vodka drenched wits. One such place is the Montana Rusa wooden roller coaster at La Feria Chapultepec Magico in Mexico City, Mexico. It was renamed Serpiente de Fuego (Serpent of Fire) in 1993 but later changed back to Montana Rusa. For several years, it held the record for the world’s tallest and is one of only two wooden roller coasters in Mexico.

Now, Moto Trials riding legend Julien DuPont decided to do something that will leave your jaws dropped. He decided to ride his trials bike across the 1.2 km long roller coaster. While working his way along its full length, Dupont also had to use skill and power to reach up to 33m off the ground on a structure designed for a powerless train assisted only by gravity. Not just that, he also performed two backflips while he was at it. Still terrified of visiting amusement parks? Watch the video.