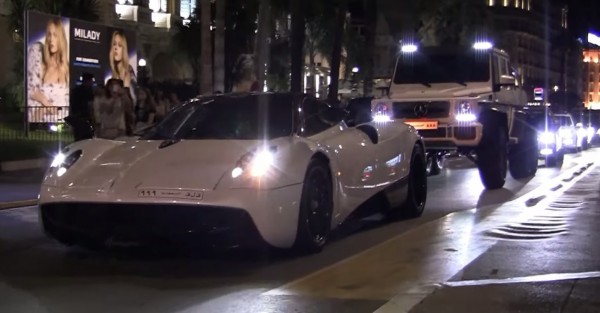 The Mercedes G63 AMG 6×6 and the Pagani Huayra are both powerful, niche, exclusive machines. The lunatic G63 6X6 is a colossal SUV fitted with a 5.5 litre, V8, AMG engine which belts out 536 bhp and drives all the 6 wheels. The Pagani Huayra on the other hand comes fitted with a 6.0 litre, twin-turbo V12, AMG developed engine that produces 720 bhp and 1000 Nm of torque. So both the cars met, and got along nicely once they discovered the commonality between their hearts.

Between both of them, they develop so much power, its obvious they’d have a drinking habit. So they set out in the search of a bar around Cannes, a city in the French Riviera where the rich and famous hang-out. Apparently, both the cars are registered in Saudi Arabia and belong to Yazeed Al Rajhi, a Saudi Arabian rally driver. No wonder then, its easy for him to afford the fueling cost, as all he has to do is make a call to his country and they’ll send a tanker wherever he wants. The video also features some more exotic machinery, however, these two take the cake. We think the 6×6 must’ve ordered a barrel of beer and the Huayra probably finished all the tequila in Cannes.