Today’s (3rd December 2009) Pune Mirror newspaper carried an interesting article called ‘The Great Helmet Debate’. Like any debate, there were two sides to the whole helmet-compulsion issue. While we agree with the ‘right’ side, the left side had a lot of points that we could turn down in the biker’s favor. What we have below is our viewpoint against each and every issue raised against helmet compulsion. Since we were running tight of time, we have not quoted the arguments printed in the newspaper. We have however attached photos of the article for you to refer. And since most Pune readers have the Pune Mirror with them, we urge you to read page 4 of today’s edition before reading our reply.

1.& 2. While it’s true that riding on bumpy roads with helmets can lead to back and neck pain or spondylitis, there are certain measures which commuters can practice to avoid or reduce the above stated medical conditions. One such measure is to use neck braces or neck supports and spine protectors which provide a cushion to your neck and back from those jolts and jerks while riding on bumpy roads with helmets. These products are easily available in the market or you can also order it online from most other websites that sell helmets.

3. The reduced field of vision depends highly upon which helmet you are using and not on the generalized assumption made in the statement. There are plenty of brands of helmets available where the visor of the helmet ends right at the top of your ear. This allows better visibility and a larger field of view to the rider.

4. For the hearing impaired, there are specialty devices where the receiver of the hearing device can be attached outside the helmet. The construction is similar to a Bluetooth hands-free device for a cell phone, where the earphone plugged in the ear, while the receiver/remote attaches to your shirt via a mounting clip.

5. One proven and tested measure to avoid fungal and skin diseases, dandruff and hair loss apparently caused by excessive sweating inside the helmets is by tying a simple cotton bandana. This will absorb the sweat and also can be easily washed back home. It will also protect the insides of helmet itself from being damp. Higher spec helmets come with removable (and washable) liners and padding which can be washed as easily as your handkerchief.

2. What would you rather prefer- a) an underage person riding a bike with his helmet on and thus reducing the risk of death? Or b) an underage rider riding a bike without a helmet, so that the cops are able to determine the age of the rider and in turn increase the chances of his death even in the smallest of accidents?

1. Helmets may not provide security in accidents as mentioned in the ISI book but it greatly reduces the number of deaths. The fatality of an accident depends upon the nature of an accident. Like any other security device, higher levels of safety will come at a higher price and the same goes for a helmet and other riding gear attached to it.

2. We can’t disagree more. First and foremost, the number of bikes on Delhi roads far surpasses the number on bikes in Pune. Secondly, helmets are for your own safety, but they don’t teach you how to ride responsibly. The sense of responsibility is something that have to be inculcated within the rider by way to better traffic rules, better traffic literacy and stringent punishments to those who don’t abide by the law. And again, the rider’s face is not his only identity – the registration plate can be used to nab offenders even if they are wearing a helmet.

1. If death is the penalty for a murderer, then why isn’t the penalty the same for a rapist or a mere thief too? An accident is not something that you predict or intend. It’s an accident and a helmet is a safety measure that may prevent the accident from turning fatal. Alcohol and cigarettes on the other hand are addictions that a person chooses at his/her own will.

2. Well in that case we should make public transport compulsory. So that will eradicate the need to large parking lots and the problem of vehicle thefts! There is nothing wrong in being organized – adding a helmet stand in public spaces and attaching a helmet lock onto your bike is no big deal.

3. There are helmets available which are made for children. The sole reason why we do not see them much in the Indian market is because there isn’t that much demand for them. If the parents are responsible enough to demand the manufacturers for a youth range of helmets, they will manufacture/import them without any grudges. But are we responsible enough?

Don’t we buy new clothes for your growing children?  If we can afford those clothes, it won’t be difficult to buy a helmet for every family member once every two years. Sorry to say this, but if we are not safe enough in today’s traffic environment, we won’t be left with a family to care about.

4. Pedestrians need to be more careful while crossing the streets and at the traffic signals. We would like to urge the pedestrians to use foot paths wherever available instead of using the roads meant for traffic. The rules are not for vehicles alone, they are for the pedestrians too. Comply to them and you should be safe.

Wearing a helmet is not only about your own safety. There are a million reasons you can hide behind. But tomorrow an innocent rider, who complies to all rules may accidentally known you over – ending your life. But for the person who knocked you over, it may turn to be a punishment of a lifetime. 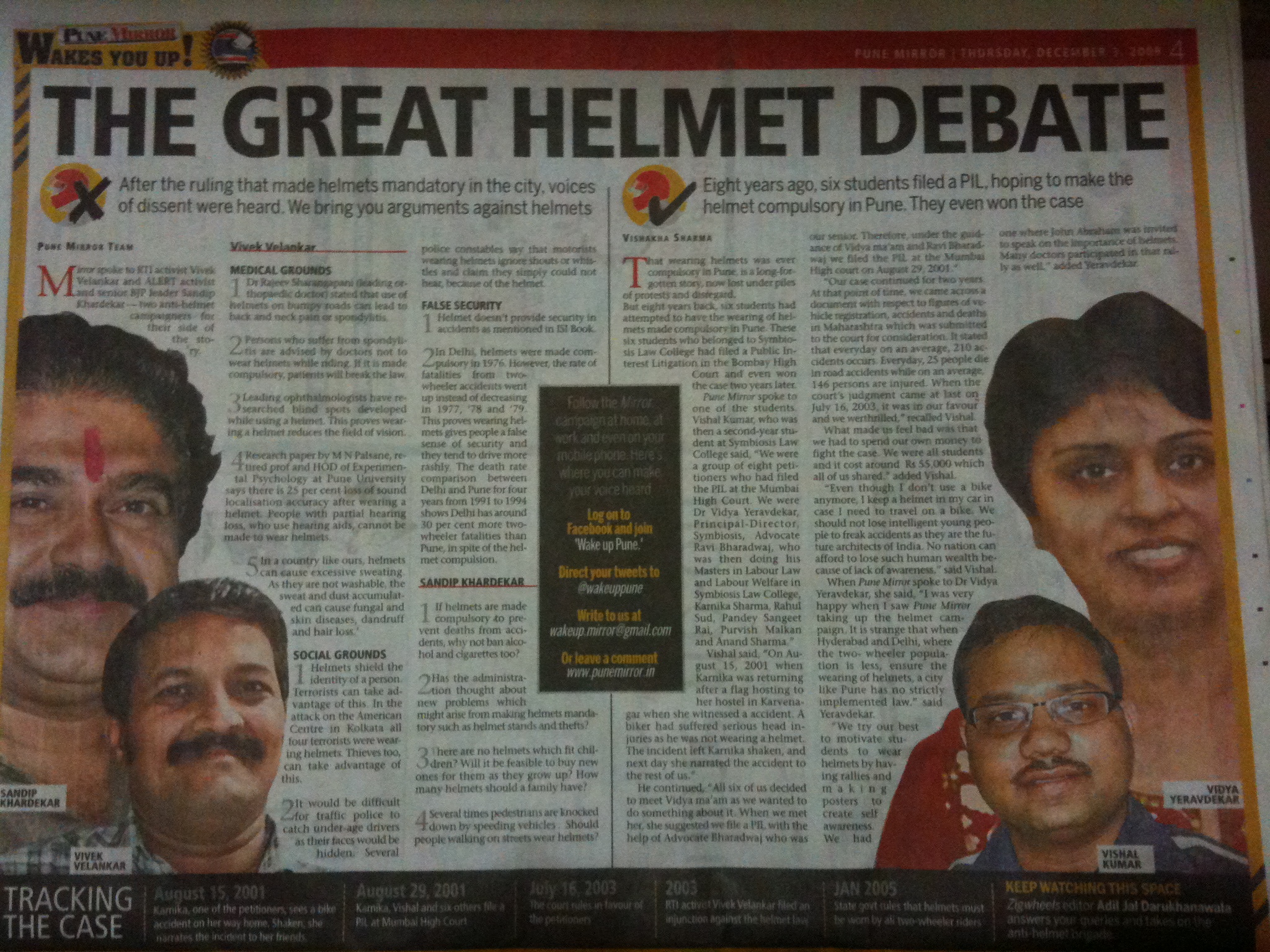 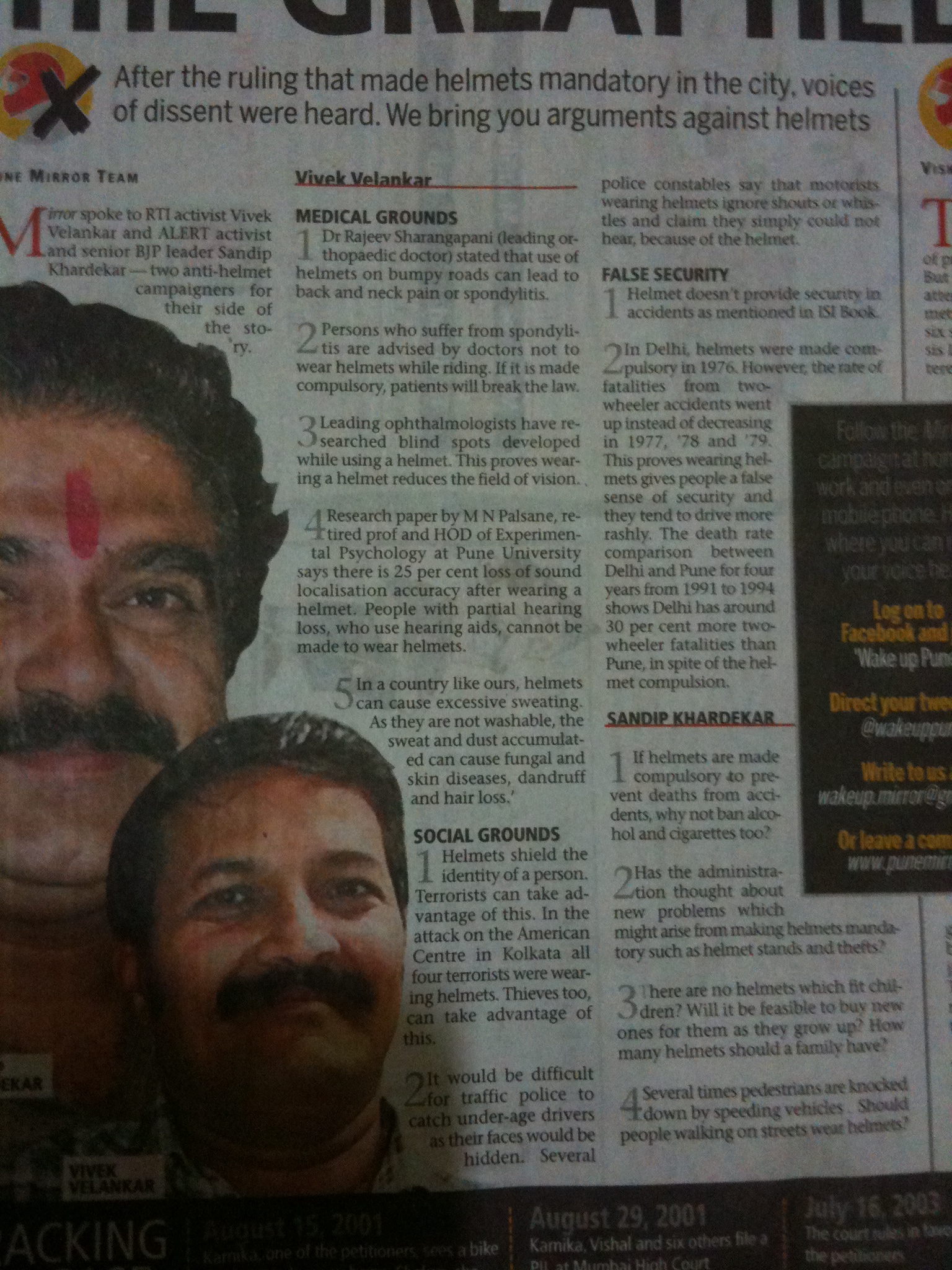