A solo motorcycle adventure takes Jaideep Khodaskar on a 5500kms, 15 days ride across the Himalayas. Here he shares his experience with Motoroids… 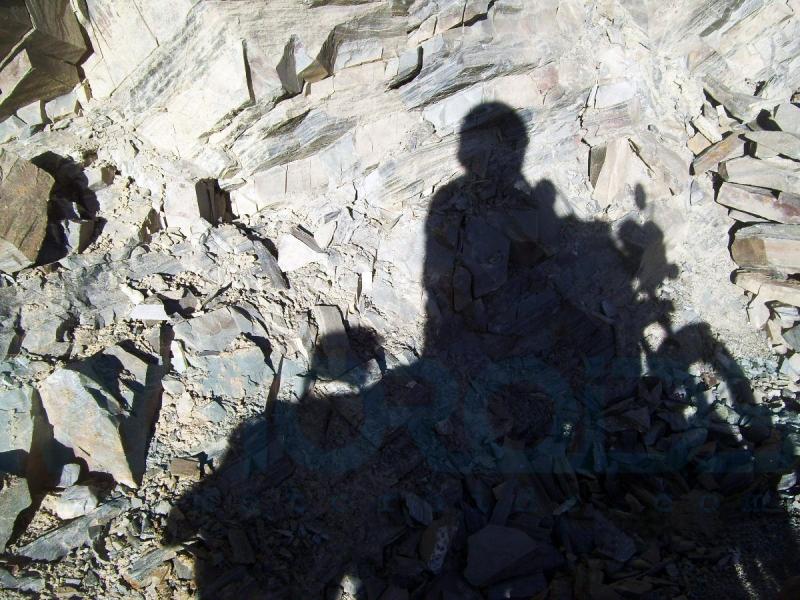 Riding solo is very exciting owing to the fact that risk and reward, both belong to you. Biking for me is all about the feeling of freedom and this bug stung me during my college days, when I embarked on a 5000kms ride through South India. Now I am an International marketing professional, at 39 years of age and yet the flame of Biking still burns bright. My big solo adventure ride started from Ahmedabad at 5:30 a.m on the 14th of August 2009. 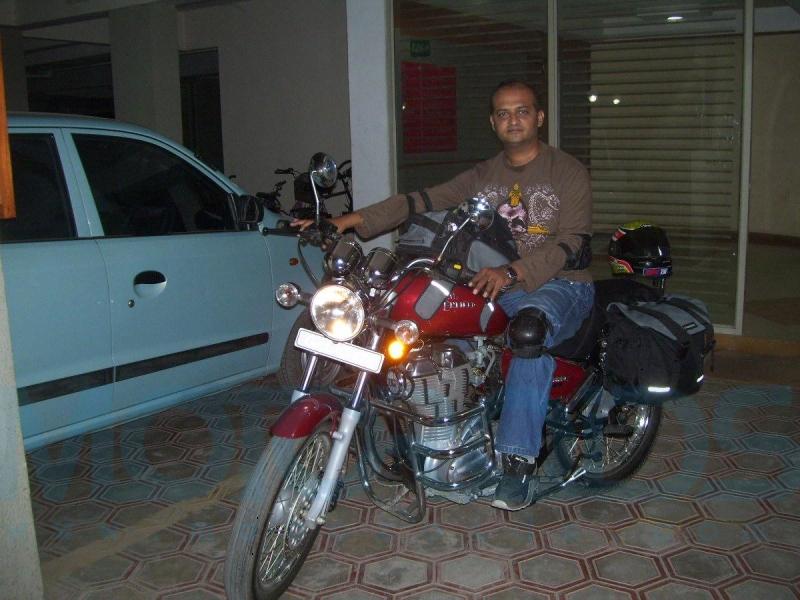 That’s me, after I was done loading the luggage onto to the bike for my big adventure

With an objective of witnessing the Independence Day parade at Wagah border in Amritsar on 15th August, I started a day earlier from Ahmedabad. And by evening I reached Jaipur where I took a halt for the night. On your way to Jaipur, you can see many trucks carrying the Rajasthani marble which is globally very popular. 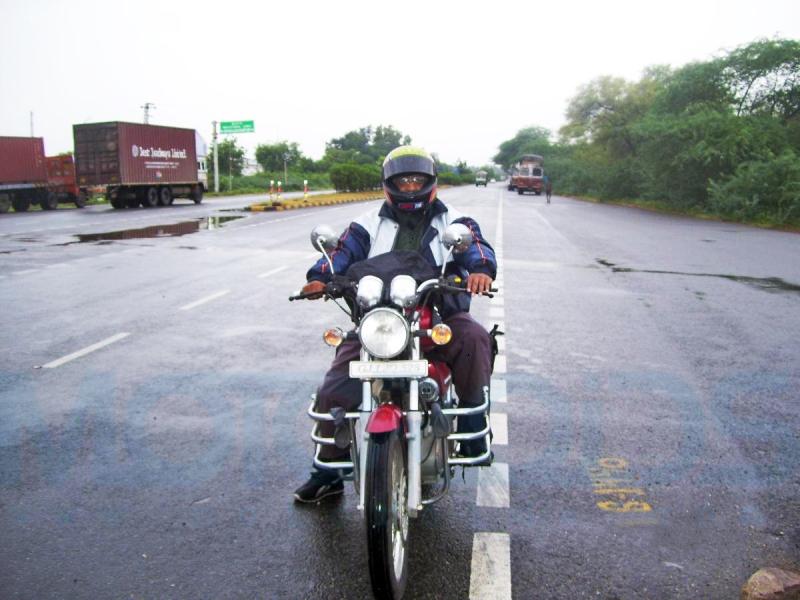 Heavy rains enroute Jaipur to Amritsar, compelled me to slow down

Since I had to reach the Wagah border by evening, I started really early at 3:30am so as to reach Amritsar in good time. But as the saying goes, ‘Man proposes and God disposes’- came true! It rained heavily that day and I was compelled to slow down throughout the ride. As a result, I missed the Independence Day parade! Once I reached Amritsar, I checked into a hotel, dried all my belongings and retired for the night. 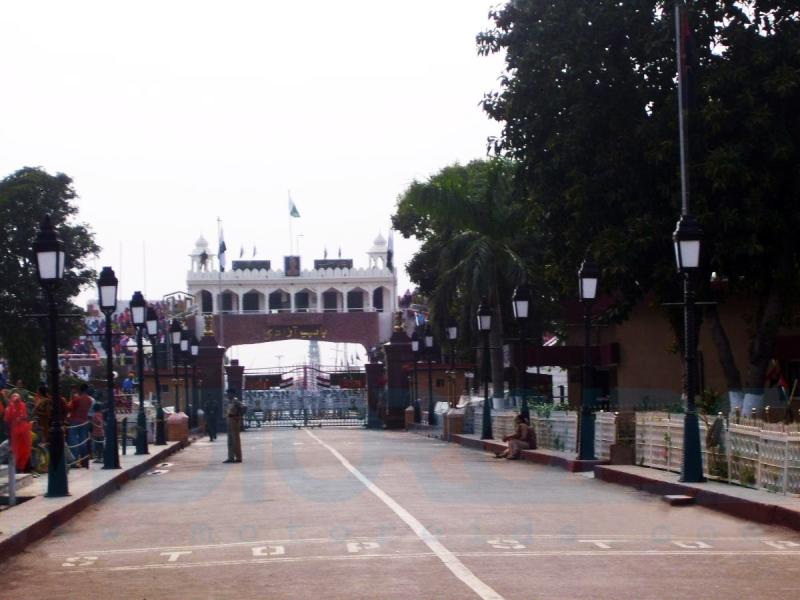 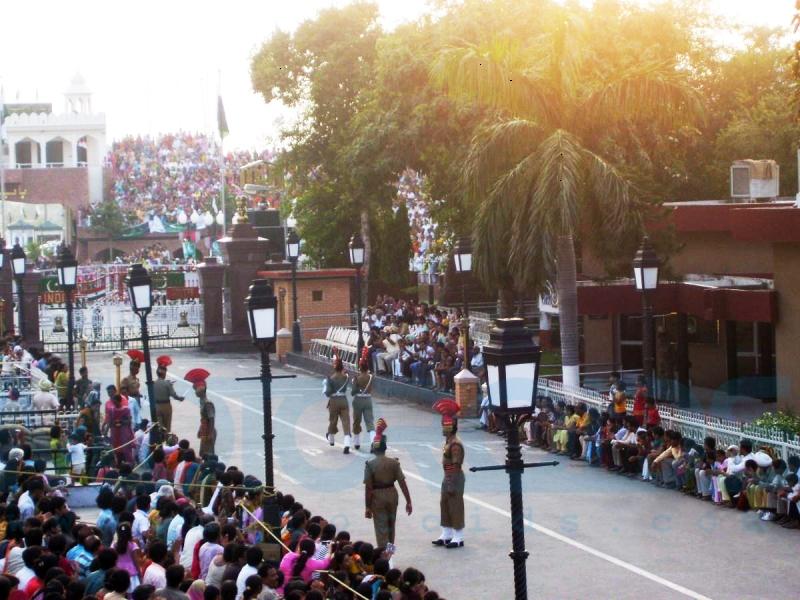 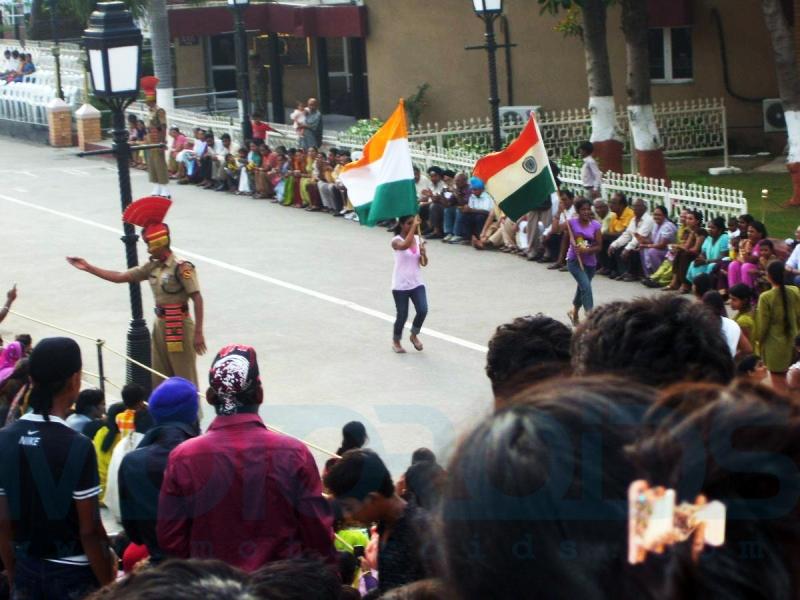 At Wagah Border in Amritsar. You can see the Pakistan side of the gate, the on-going parade and women waving our National Flag and cheering for our country

I rode down to the Wagah border in the morning of the 16th and it was an amazing experience. The stadium was packed to its full capacity and people were cheering for our nation at the BSF Parade where the BSF Jawans presented an excellent parade.

After resting well on the 16th night I geared up for my ride towards Srinagar and started at 5:00 a.m. The road conditions, terrain and ghat sections on today’s ride provided me with the synopsis of how the Ladakh region is going to be like. I managed to reach Srinagar in the evening at about 7:30p.m and hired a House Boat for two nights. During my stay in Srinagar I visited some of the tourist places in the city and also rode down to the popular Dal Lake. 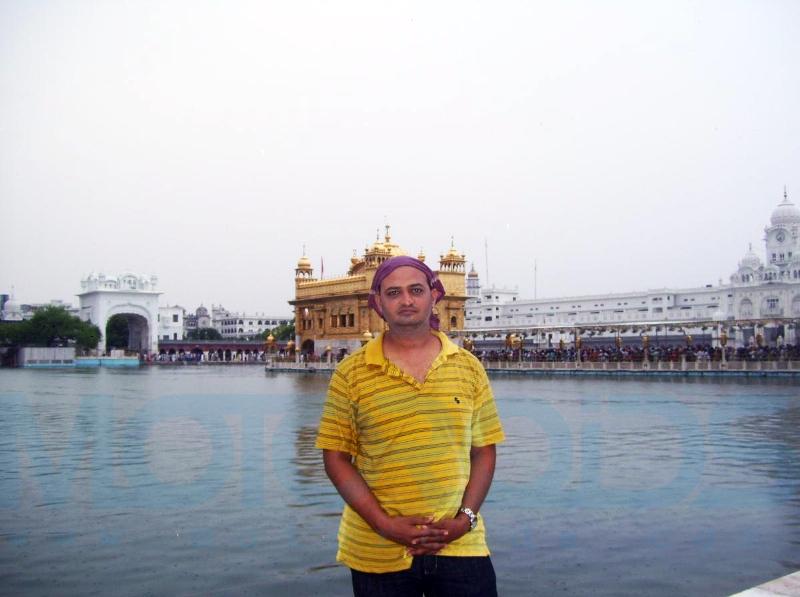 At the Golden Temple in Amritsar 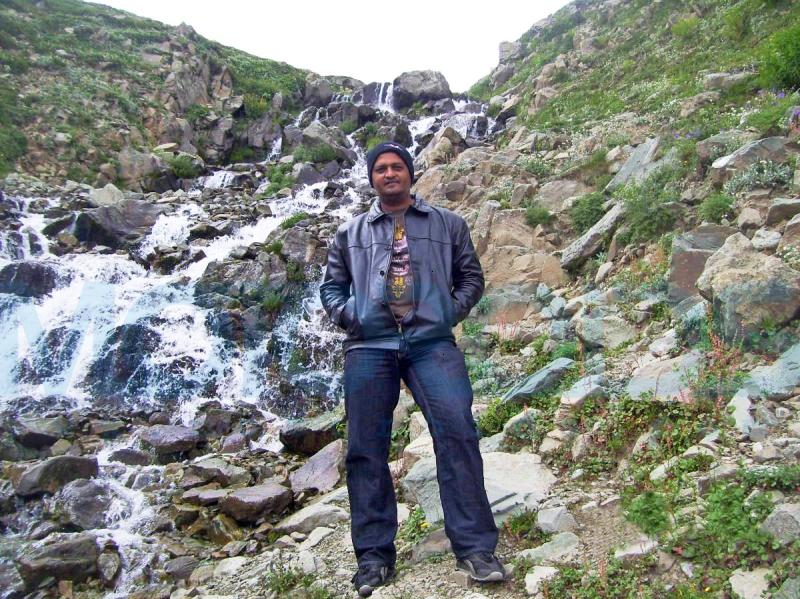 Posing in front of a waterfall at Gulmarg 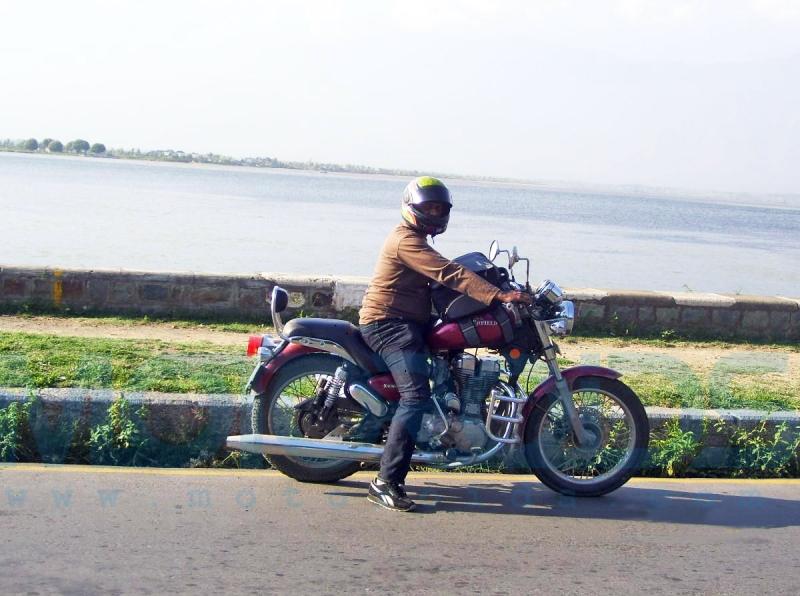 Dal Lake during the day time

On 19th Morning, I left for Drass sector and the Kargil war memorial. Enroute I passed through Sonmarg and it is one of the most beautiful places I’ve ever been too. My sole objective to reach the Memorial on this day was to be present on the 10th anniversary of the Kargil War Memorial. The names of all the war heroes are etched in pink stone at the memorial. There is a Manoj Pandey war gallery with photographs of the war and some Pakistani arms and equipments seized during the war. The poem “Agnipath”, which was presented to the army by Mr. Abhishek Bachan is also displayed in the Gallery. For me, this was a very emotional experience which left me in tears and I would like to urge every Indian to visit this place. 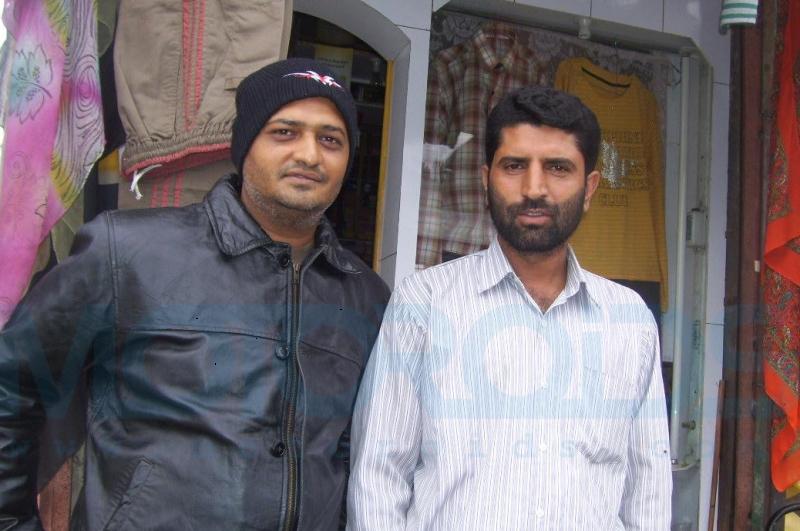 This gentleman treated me to Tea and local bread in Srinagar 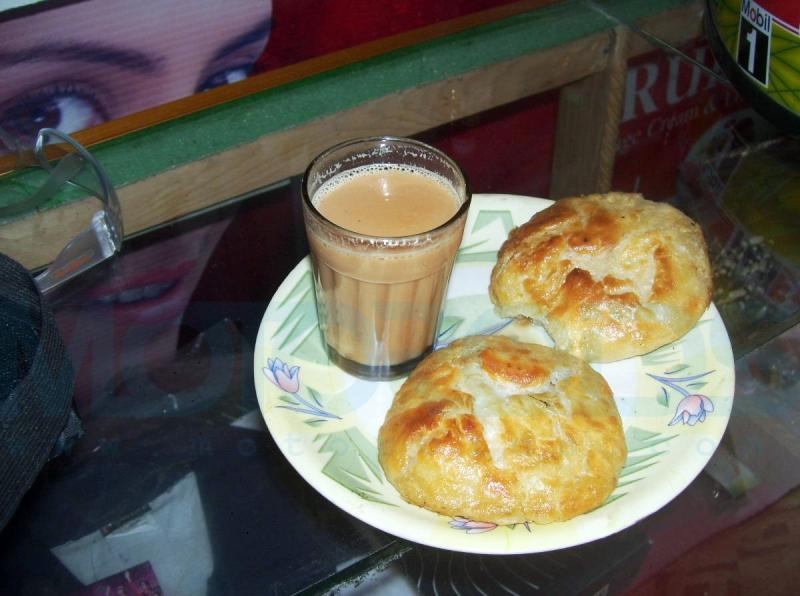 From the War Memorial I made my way to Tiger Hills to enter the Kargil Town. All along the route you would see big and small memorials built by the Indian Army to immortalize the war and the non-war Heroes. One thing, which is totally commendable about the Indian Army, is the way they have built these memorials, keeping in mind the religion which the soldier belongs too. You would see a cross built for a Christian soldier and a temple for a Hindu soldier. Once I reached the Kargil town, I retired for the night at a tourist bungalow. 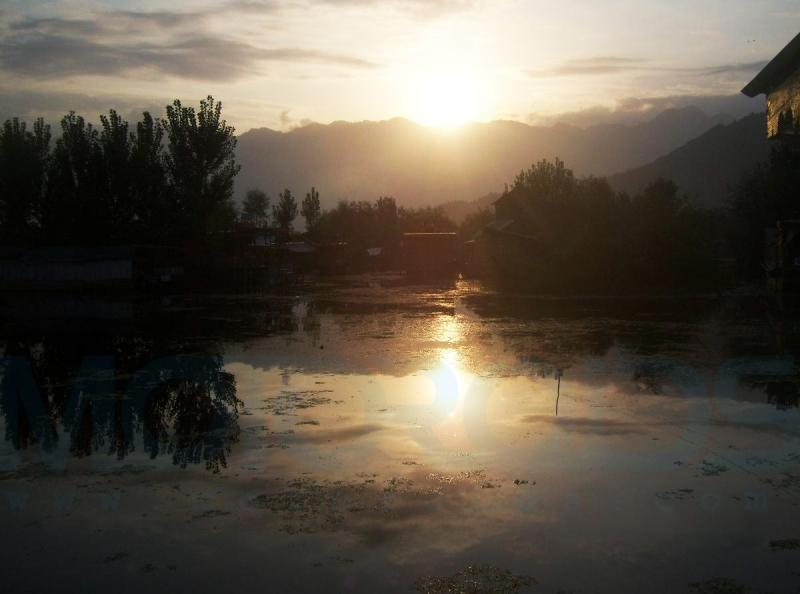 I started from Kargil to reach Leh on the morning of the 20th.  This route offers amazing landscapes and scenic locales which you may never get to witness anywhere else in the world. You also get to experience almost all kinds of road terrain which I can assure will bring out the best in any biker and test his riding skills, focus and patience. 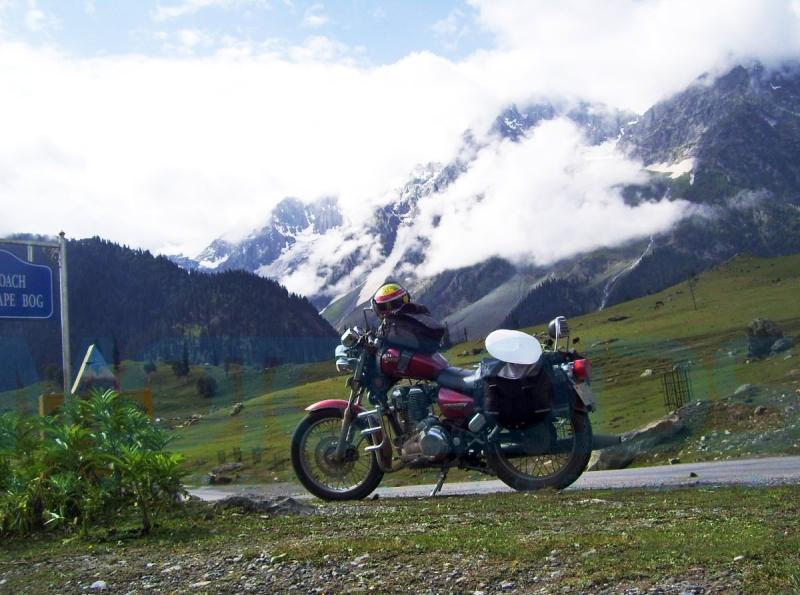 Once the challenge is passed, it definable makes your confidence to soar. About just 60kms before Leh, the roads improve drastically providing an amazing opportunity to ride on smooth, winding roads which are surrounded by gorgeous landscapes. You can see miles ahead of you and whack the throttle open. I finally, reached Leh in the evening at about 5:30p.m and retired for the night. The next day was spent in acquiring visit permits to places like the Khardung La, Nubra valley, Panamik hot springs and Pangong Tso lake. 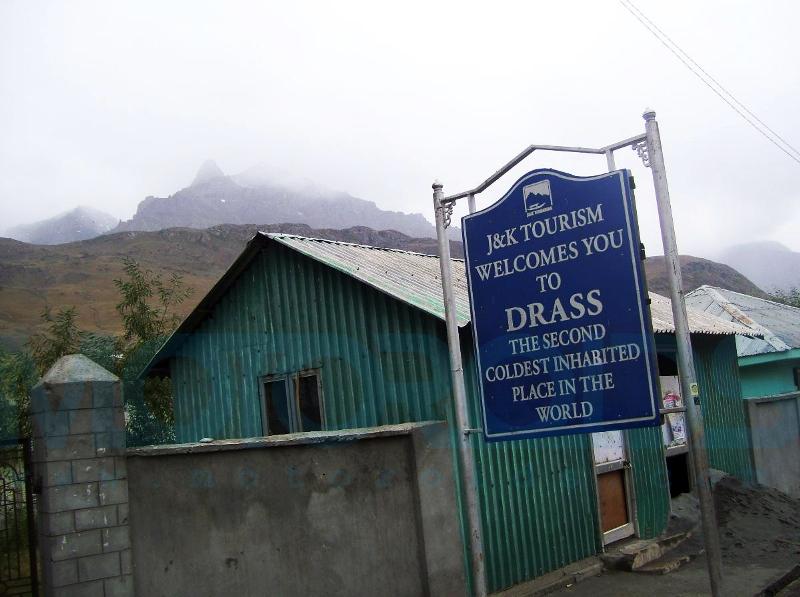 In the afternoon of the 21st,  I reached at the top of Khargung La which is the worlds highest motorable pass standing at 18,380ft. It is very beautiful, icy and for every biker it is now a ritual to have rode till Khardung La atleast once. I took some snaps here and proceeded further towards Nubra valley. By evening I reached Nubra valley and on my way I passed through some of the breath taking locations. You never feel tired when you are riding in Ladakh as with every turn, you are presented with an amazing view which refreshes your spirit and mind completely. I halted at Dishkit for the night. 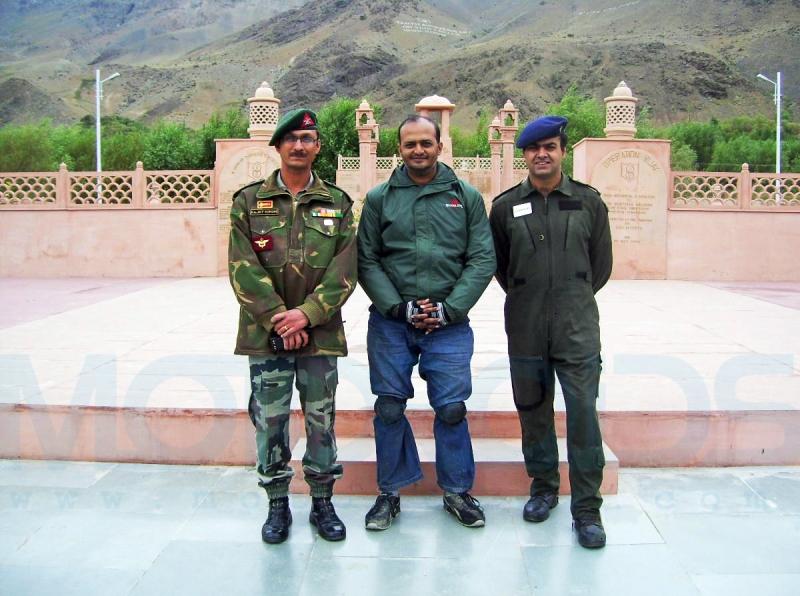 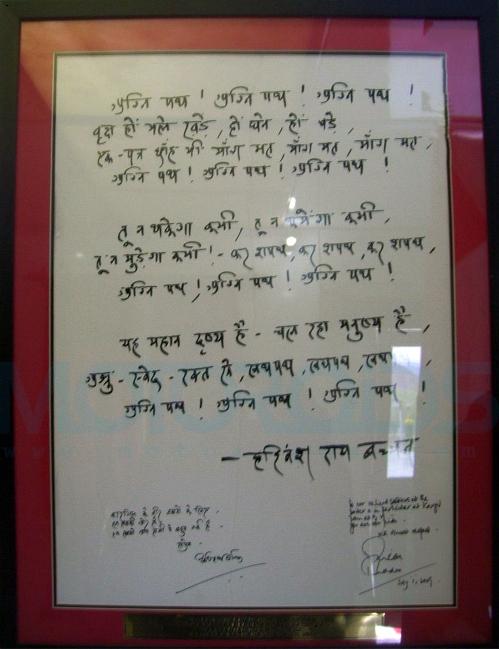 This is the poem ‘Agnipath’ presented to the Indian Army by the Bollywood actor, Mr. Abhishek Bachan 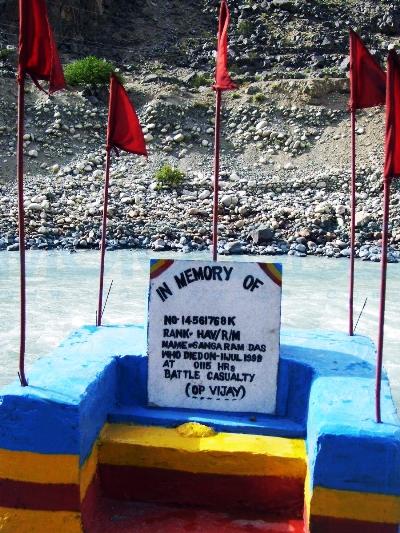 On this day I rode to Hunder to see the sand dunes and to hitch a ride on camels with two humps! After the camel ride, I visited the Panamik hot springs which is a 25kms ride from Hunder. This whole region is very beautiful beyond anyone’s imagination. It offers a number of different terrains to ride through such as a desert, the mountain terrain, the smooth plains and fields of green landscapes. After absorbing the beauty to my heart’s content I made my way back to Leh. 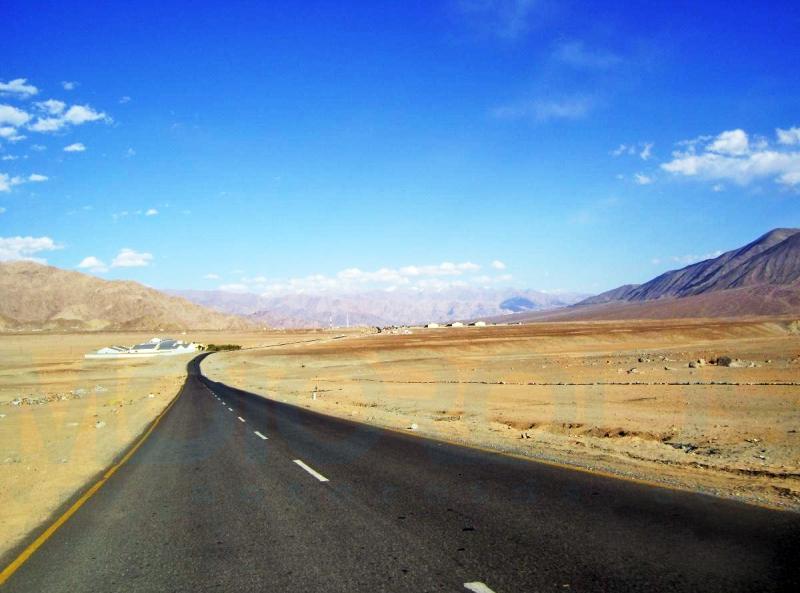 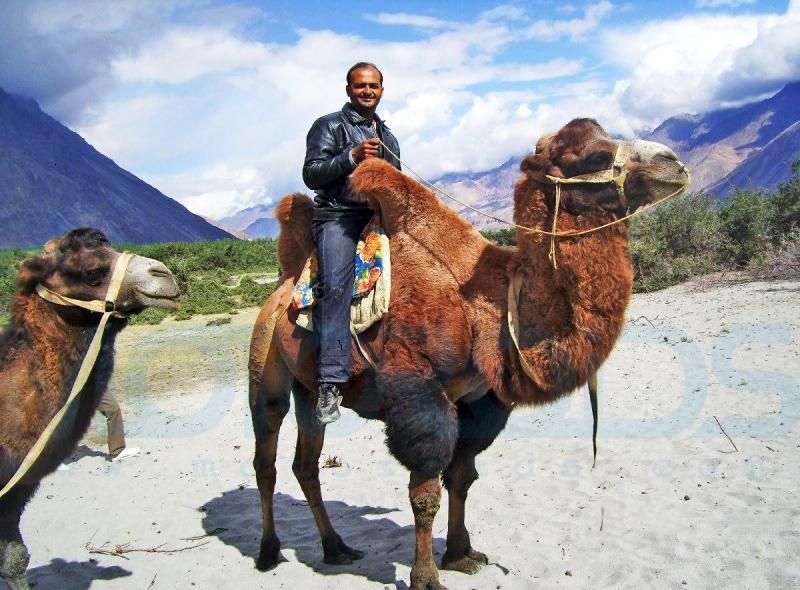 Hitched a ride on a camel with two humps, only found in the Hunder region 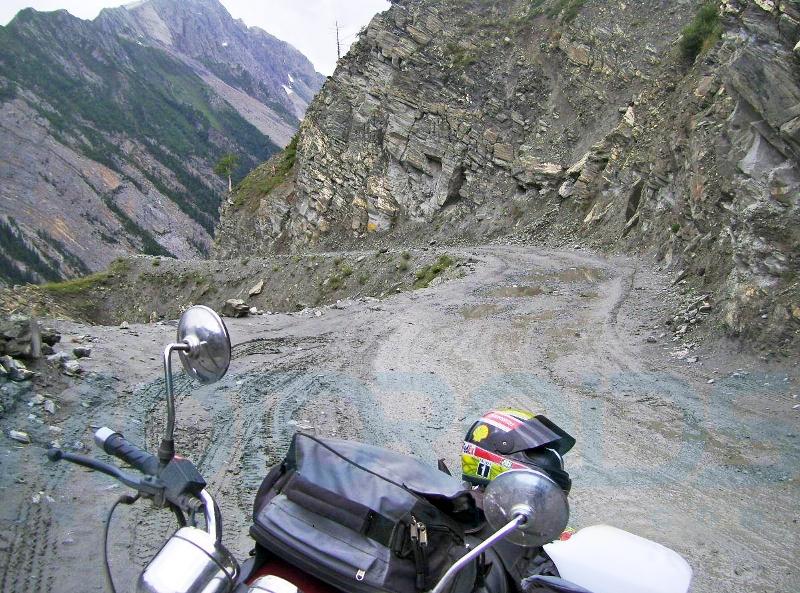 Zojila Pass, which is filled with slippery slush

I started for the Pangong Tso lake on 23rd morning. The Chang La pass, the third highest pass falls enroute and the army offers complimentary tea here. By afternoon I was at the Pangong Tso lake. The beautiful salt water lake holds crstal clear blue waters of which the half of the lake flows across into China. After absorbing the gorgeous views and capturing few snaps, I made my way back to Leh. 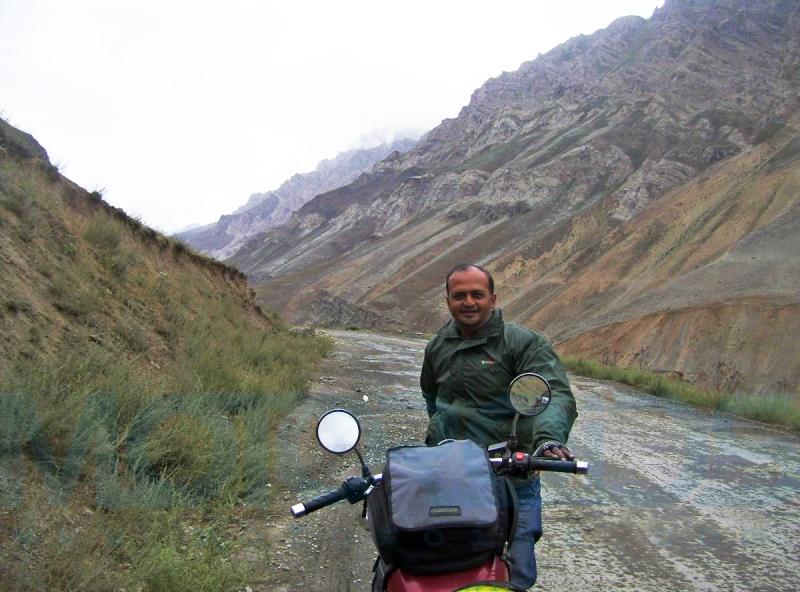 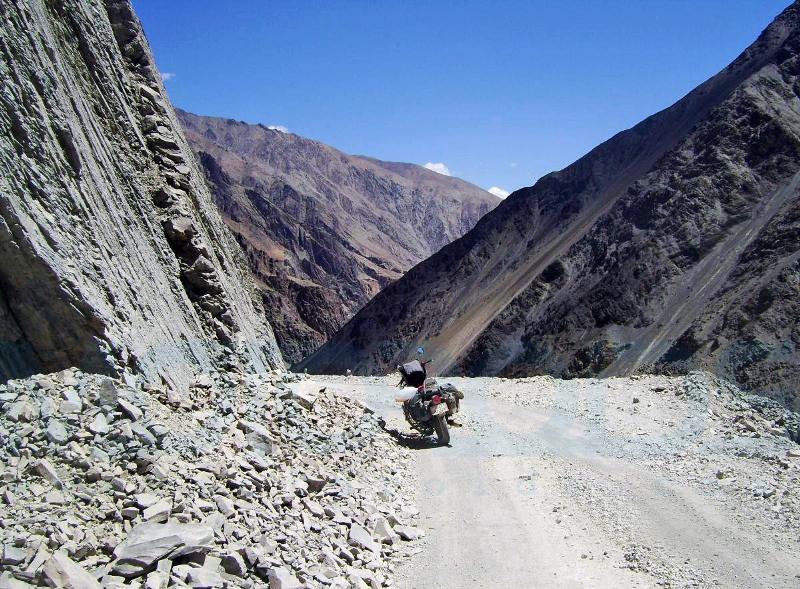 Beautiful rocky formations which Ladakh is known for 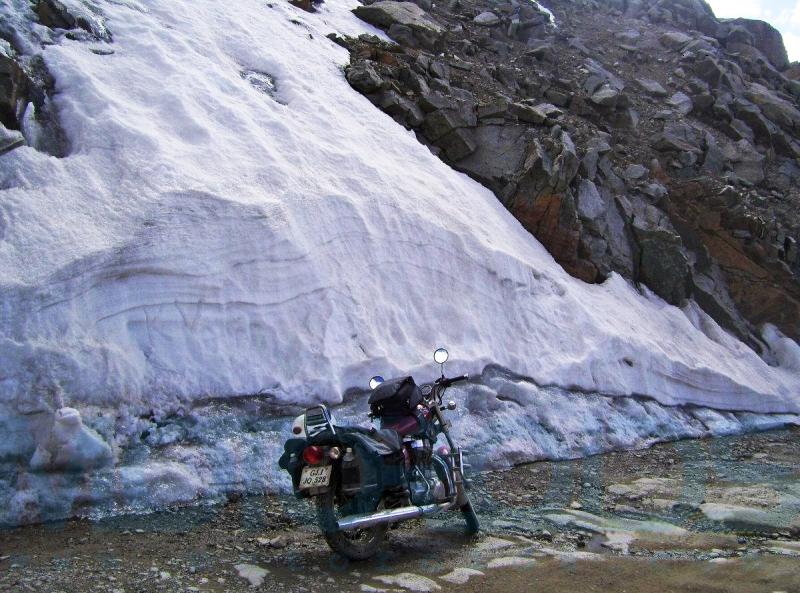 On 24th morning, I started my journey towards Rohtang pass and Manali. Enroute were some beautiful and interesting places like the world’s second highest motorable pass, the Tanglang La which is a steep climb upwards and the roads are really bad and broken. Further ahead I encountered ‘More Plains’ which is a desert amidst Himalayas.  It’s a beautiful sight of vast open ground of around 6 kms in width and 20 kms in length submerged with heaps of soft sand. After crossing More Plains I reached Pang and stopped for breakfast. Furthermore, I crossed Sarchu and reached a place called Darcha where I retired for the night in a mobile tent. 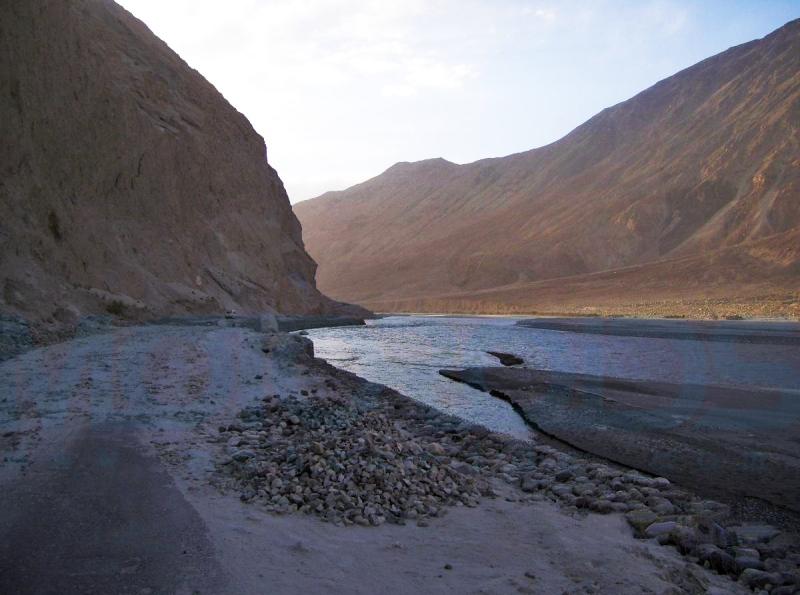 With every curve, the Nubra Valley presents a new scenic location 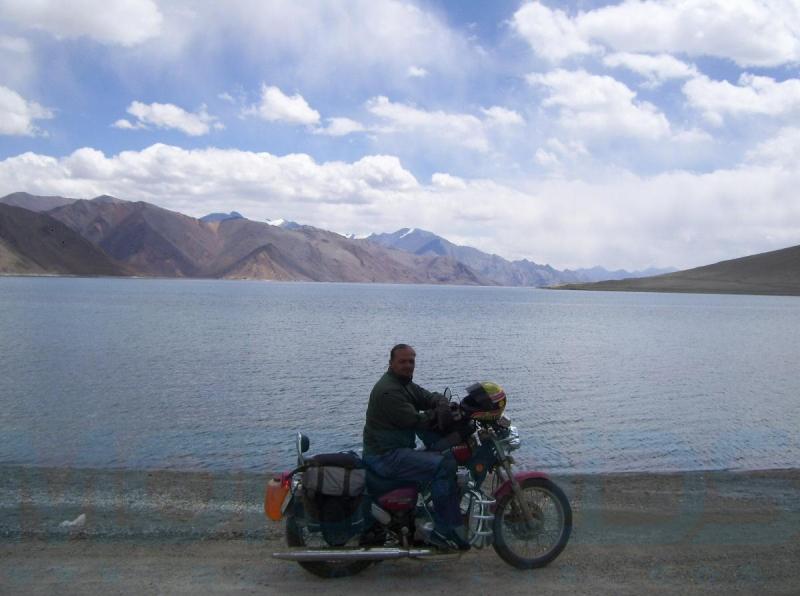 This is at the Pangong Tso Lake, half of which runs through China 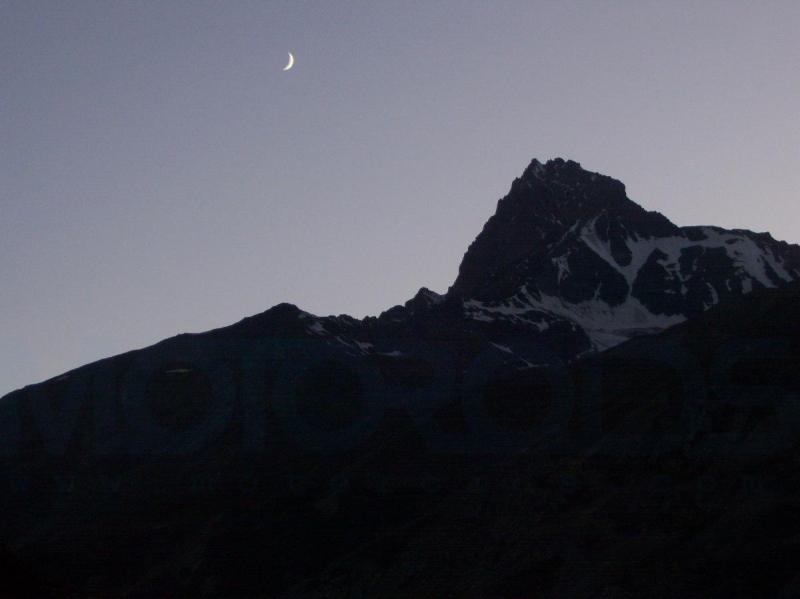 Beautiful night spent under clear skies and moonlight in Darcha

Next day I started early from Darcha and reached Rohtang by afternoon. Few more kilometers and I had made it to Manali at 4:00 p.m. I continued riding till Mandi and halted for the night there. 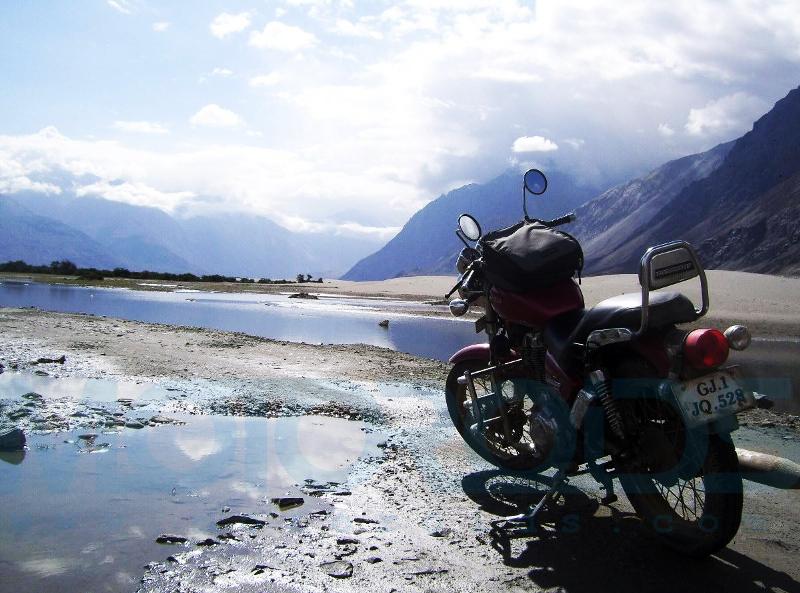 This is clicked at the Panamik Hot Springs 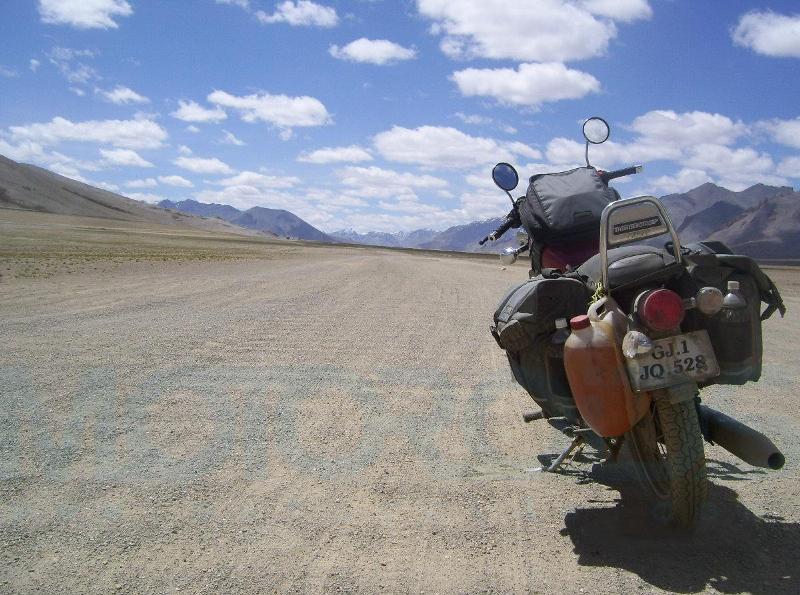 The only cold desert in the Himalayan region- More Plains 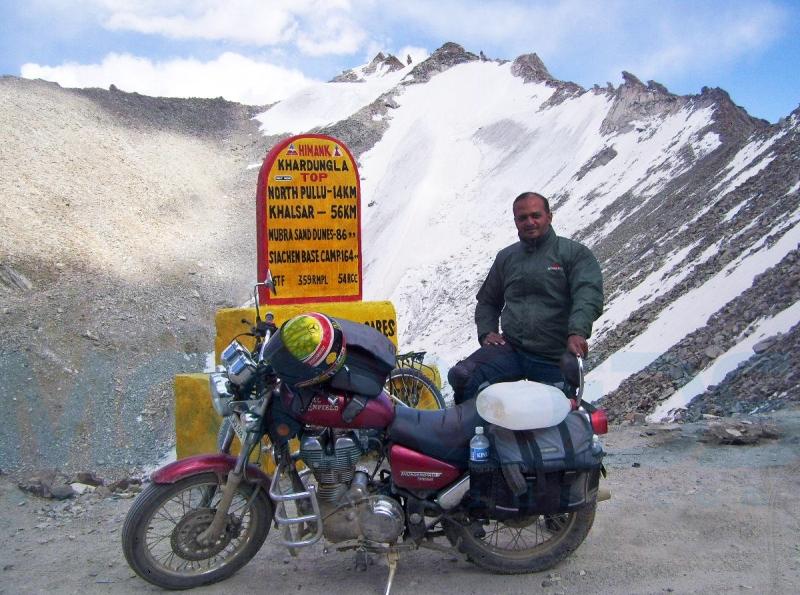 On the morning of 26th I reached Chandigargh and got my bike serviced. I stayed overnight at Hisar in Haryana. The next day I started my ride towards Ajmer but since I Decided to visit a Dargah, I had to halt at Beawer for the night which is about 45kms from Ajmer. The following day, I clocked in the final few kilometers and reached Ahemdabad in the evening of the 28th. Overall it was an experience to remember, Riding with the shadow – To the top of the world!