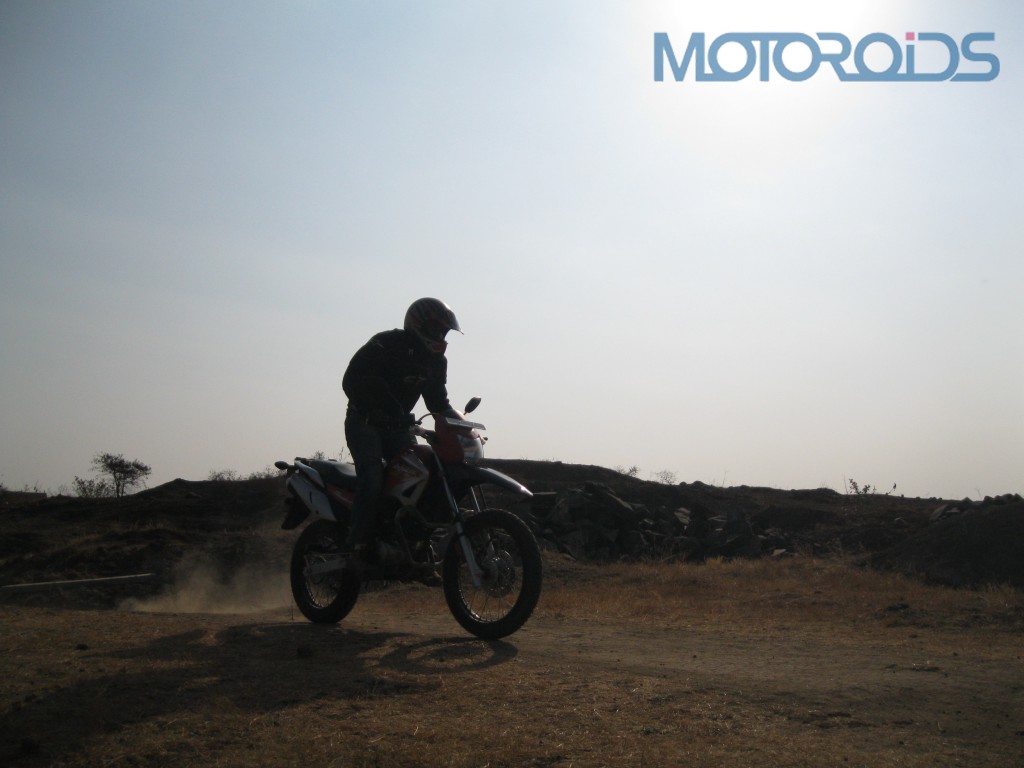 While this bike can be regularly seen on well paved city roads, we tested the Impulse in conditions for which the bike is made for – off the beaten track. Here is our take on the dirt kicking capabilities of the Impulse

Ergonomics: The first thing you notice about this bike is its high ground clearance and stance. That changes however, when you put your leg over it and get on the seat that rides above a bean bag for a mono shock. The rear monoshock is gas charged and is comfortably soft. The bike slowly goes low as you sit on it and helps your feet reach the ground. This helps in the jumps that this bike is meant to tackle because a soft suspension set up and a strong monoshock are one of the most essential features when you land on your rear wheel.

You then turn to the handle bars which have been positioned very wisely for a good off road bike. Your hands have to be high up and elbows have to be pushed slightly outside your body to help you absorb the bumps. The handle bar definitely shares its roots with motocross and enduro bikes. The dirt bike seat holds you steady and the handle lets you maneuver comfortably.  It keeps your body in the center, hands held parallel to the ground and provides a great center of gravity – you can call it a recipe for a good off roader. The tank again follows typical dirt bike design and you can put your body weight between your thighs buy grabbing onto it. The ground clearance is fair enough and no center stand helps it even more. The bike easily clears rocks and bumps under it.  An average sized Indian should have no trouble getting his legs onto the ground. This was a pleasant surprise as we were expecting the bike to share the height with a standard dirt bike and honestly, my feet don’t touch the ground on a real dirt bike. The Impulse was a baby version of the same so the saddle height being low really helped. 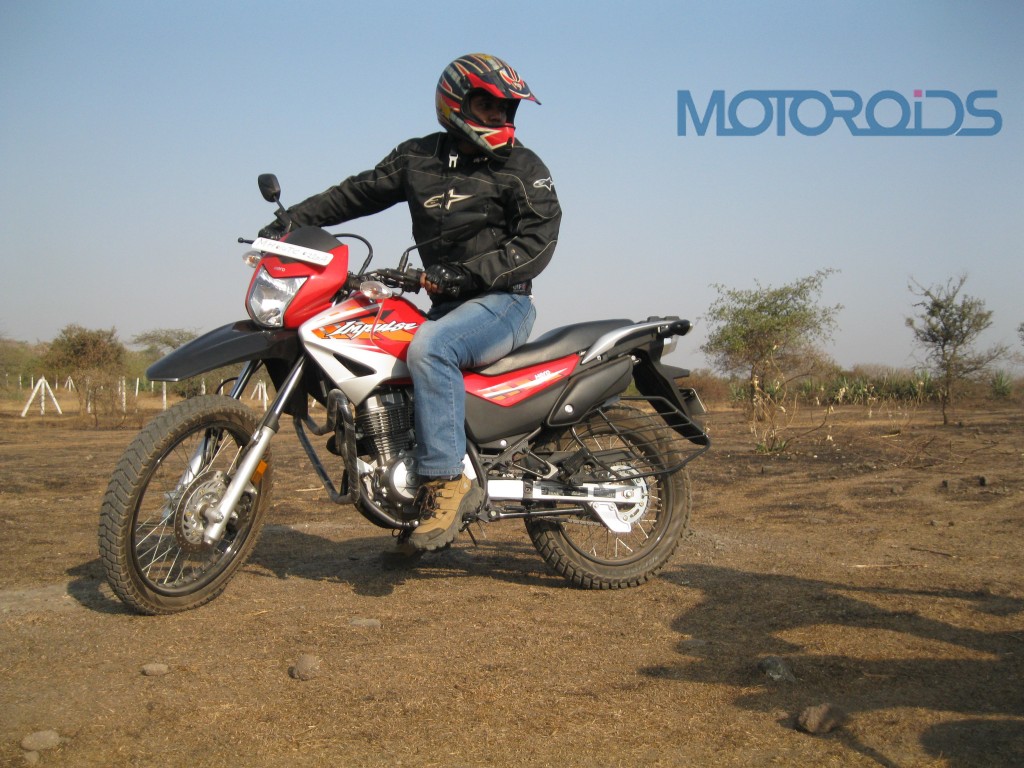 Suspension:In a bike made for off-road use, one of the three main factors is suspension. As mentioned above, the rear suspension on this bike is quite good and it helps you play with the bike over bumps and rocks. The soft suspension set up is always an advantage in off road racing. If you’re traversing a rough, uneven terrain, with lots of elevated surfaces around you, this bike will climb up and down any of them with ease(unless they are steep and you need torque, read on). That’s where the rear suspension comes into play. The front suspension came as a slight disappointment as this kind of bike deserves to have inverted forks but it doesn’t. The forks did the job fairly well over boulders and hills as I tackled them but if it were a professional MX rider testing this bike, he would have needed a lot more. The forks are thin and almost Splendorish in a sad way. Overall though, you can glide over all sorts of hurdles that a typical off-road terrain in India may throw at you as long as you keep your speed under 60-80 kph. 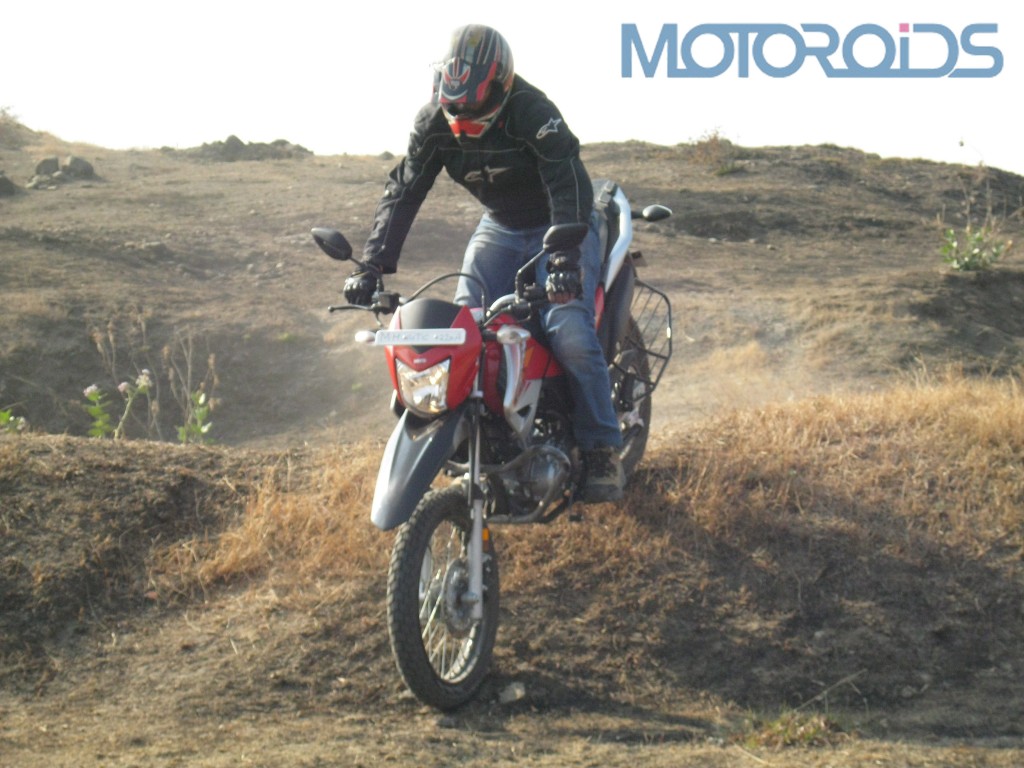 Performance:Frankly, I’m not the kind of person with only speed and raw power on my priority list. Not that I don’t enjoy it and don’t want it but I like riding, period. Now that riding can be on any bike from a 100cc to a 1400cc, I just like riding bikes the way they are. Yet, I was somehow disappointed by the power delivery from this one. The Impulse has a Hero Honda CBZ engine that has a capacity of 149.2cc and I was expecting the CBZ’s initial pick up and midrange torque on this test. This bike did not deliver in that aspect, I’m afraid.

Although it’s a tad too much to ask for from a bike which is trying to tread the middle path between being an off and on –roader, and not a true dirt bike, I think it could have done with slightly lower gear ratios for better off-roading capability. You just have to down shift more than you would like if you want to get out of a turn with needed speed. It’s probably a compromise to keep the bike more usable and fuel efficient on your daily commute to work. For most, the off-road trips would comprise a smaller ratio in the overall mileage logged.

The company does claim an average of 47-55kmpl which is a major priority for an average Indian that can’t be ignored. Now you would probably think, average middle aged Indian men probably wouldn’t buy something this extreme. Yeah right! Tell that to the uncle we saw with his wife (with a saree so a saree guard probably does help on a dirt bike) and two kids riding an Impulse in Pune. Back on the track, I couldn’t help but keep thinking WHAT IF; there was a Pulsar 220 or Hero Karizma motor in that tiny frame? Maybe I would do that engine switch if I bought an Impulse but till then it was the stock bike and more testing for me. 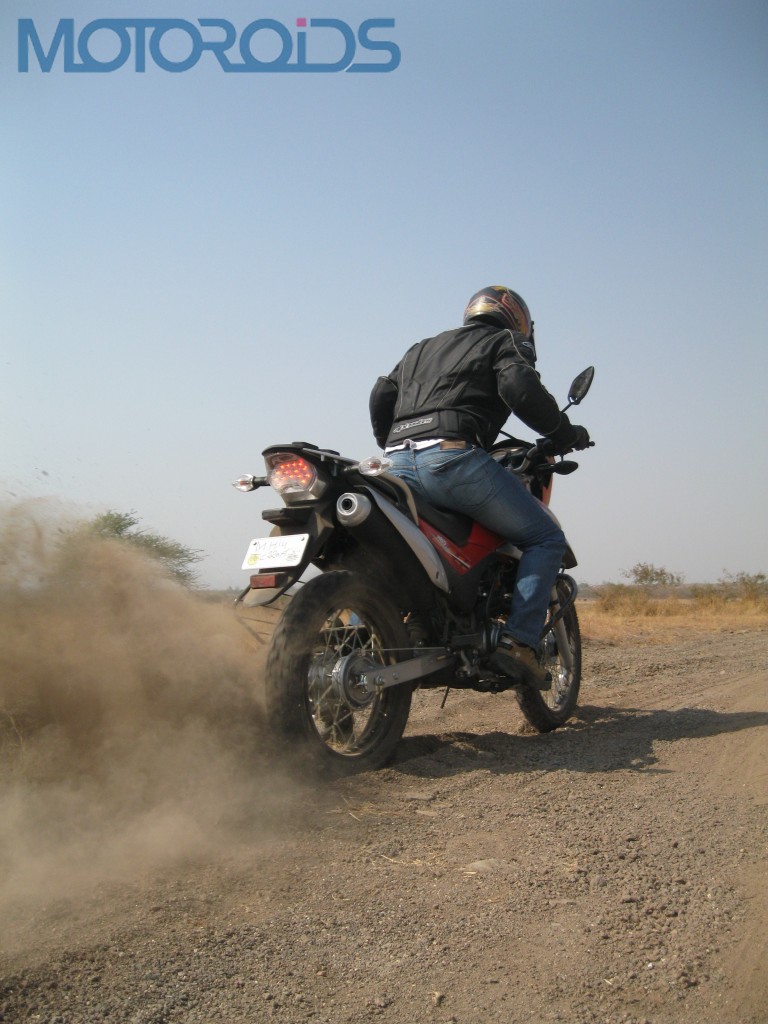 Handling:Well, let me give you an example. You know how kids want to take away the TV remote from your hands and change the channel because it’s fun to press buttons and be in control, this bike makes you that kid. Even beginner riders wouldn’t shy away from rolling back the throttle on the dirt with this baby. That’s what a dirt bike should be like -it should inspire confidence in you. We give bonus points to Hero for handling. What the Impulse lacks in performance, it more than makes up in handling. It takes you onto a dangerous terrain with confidence and keeps you up right as you try to conquer it.

The rear drum brakes (although they look cheap) are quite good and the front disc, well I didn’t really press it anywhere on the gravel. The handle bar does not vibrate, and thanks to its position, coupled with the suspension setup, it doesn’t jar you as the rubber kisses mother earth after a short flight. The foot pegs are strategically positioned to help you when you stand up on them. The kick lever was a pain in the wrong place, as it kept vibrating against by shinseach time I had to take a left turn with my right leg closer to the tank. It was almost like having a large electric vibrator against the area around my calf.

The sand filled terrain was tackled easily as the bike stayed right up even after being flicked around. The tires also played an important role in this area and they were quite good but might wear off soon as they have complex button treads which rub away when used on tarmac for long distances. The small jumps that we could find were fun with this bike again, thanks of its good suspension. I have to admit that I was pleasantly surprised by the overall ride as I have had the opportunity to ride 500cc dirt bikes before. This one’s a baby in comparison, but its a real good baby! 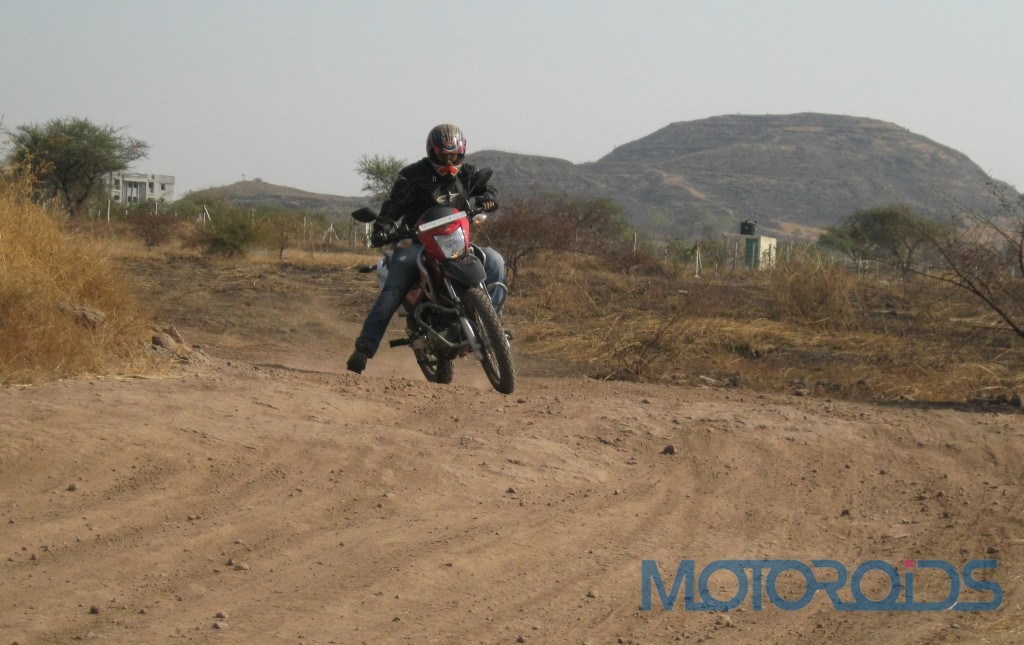 Build Quality:Talking about the build quality of this bike is a little complicated because we saw lots of glitches before the test but we stand corrected after the test. The rear swing arm had some visibly shoddy weld marks that looked as if they had been done in a garage by a local fabricator. The rear brake springs and linkages did not look too strong although the brake lever was aluminum with motocross style teeth on it. The front forks as I mentioned earlier could have been a lot better. The front disc’s cable curls onto one end of the handle bar and hangs in the center before reaching the other end. That was very odd because we really didn’t understand what that cable was doing on the center of a handle bar. Some of the wiring was exposed near the gearbox. The exposed wires looked like they had been torn out. The gear lever could have done with a better design that would help in riding. The seat was comfortable though, and had a whole lining of visible stitches which actually looked very good. The rear heat shield for the exhaust heats up a tiny bit but nothing close to the temperature at which the pillion would feel uncomfortable. Overall the frame is strong enough and will survive if an everyday Indian takes it off road on weekends. I don’t really think it could survive the punishment from professional motocross riders though.

After discussing all aspects of the test – road and no road, we came away impressed with the bike. The price, had it been Rs 5000 cheaper, would make more sense. The Impulse, however, is a nicher bike, and those who want it wouldn’t probably mind shelling out that little bit extra for the advantages it offers. To sum it up, if you want to have something that stands out of the crowd in your garage and have a totally different and unique riding experience on weekends this bike will give you loads of thrills. Having said that we should also mention that a lack of power is clearly perceptible. Especially if you are a seasoned rider.  The Impulse is good for a casual fun filled trip off the road, but if you want to load it up with a pair of panniers and go to a month long adventure trip to Ladakh, we guess you’ll have to wait for a bigger heart within that frame. 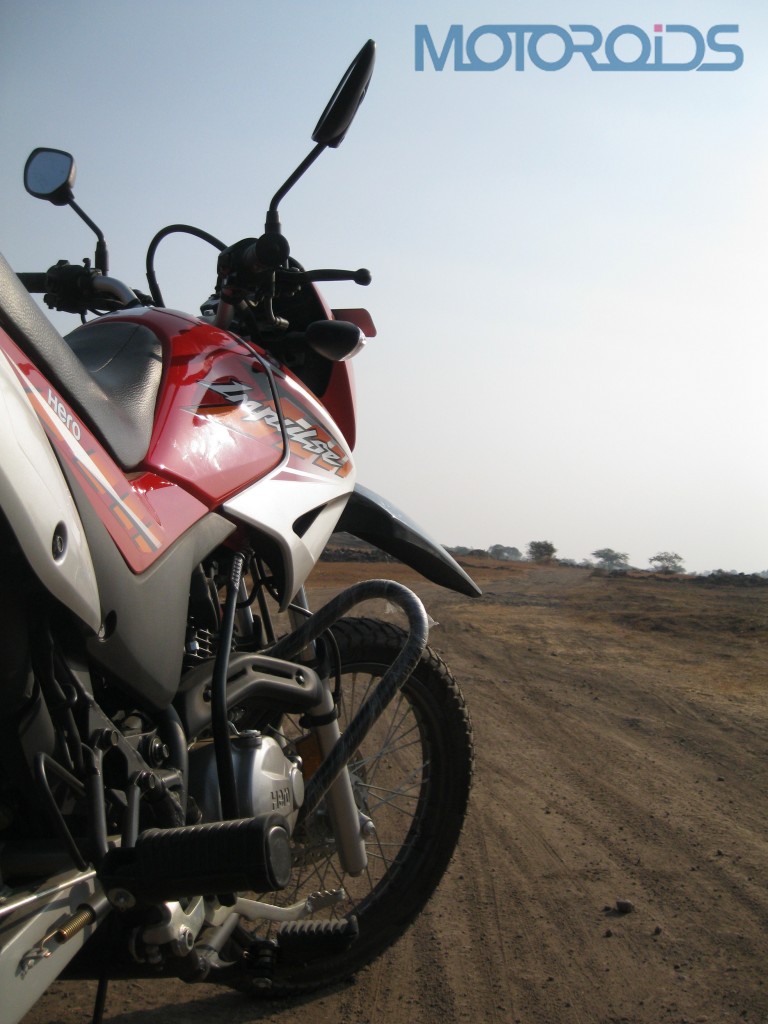 Verdict : Well, I had a lot of fun with this bike and did enjoy almost everything about it but there are always those tiny snags and imperfections that take away the gold medal. It was no different with this vehicle as it failed to provide the power that we were looking for. Having said that, I would definitely buy one of these for myself if the price tag went down by about 5 grand.