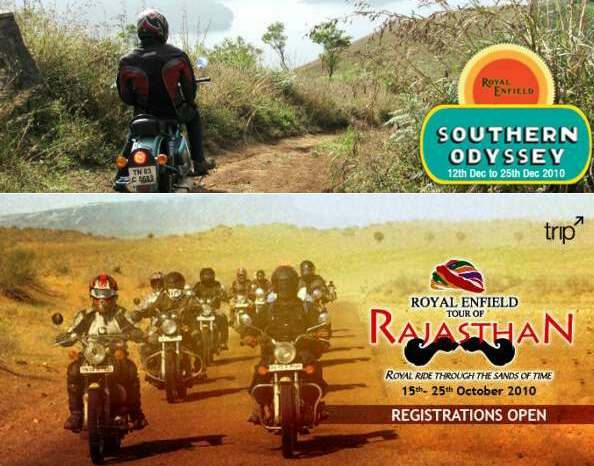 Royal enfield has just released the details about their upcoming ride events. If you happen to be a hardcore Bullet fan, then to have a look at this event calender indispensable. RE has issued information about the upcoming ride events as well as their annual bike fest – Ridermania, which is nothing less than the holiday of the year for many a biking buffs. To every biker’s delight, the RE Rider Mania will be organized in Goa this year, there really couldn’t have been a more fun place for this mega congregation. Apart from the Rider Mania, the ride events announced by Royal Enfield include ‘The Southern Odyssey’ and ‘The Tour of Rajasthan’

Go to next page for detailed official info on the upcoming events and rides (Rider Mania, Southern Odyssey, Tour of Rajasthan) by RE

Press release
The Tour of Rajasthan is a ride far off the beaten track that will test your mettle and build your talent on the famed deserts as well as a ride on some of the best tarmac in the country. Ride on routes that few ever ride on, country roads, sand dunes, hills, jungles, highways as good as landing strips, a dry salt lake and all with little or no traffic. Then there’s the border road where your Royal Enfield will be the only vehicle passing through some of the famous 1971 battlefields. And we will stop en route to pay homage to a temple devoted to a Royal Enfield Bullet. The ride will coincide with the Marwar Festival at Jodhpur. Sumptuous Rajasthani meals and breathtaking monuments is a treat at almost every stop. Stay has been organised at heritage properties, a castle hotel, a palace and luxury dune tents. We have found another elusive rider’s paradise. Couples can also register for an adventurous getaway.

If you like to ride steep gradients, catch a glimpse of exotic wild elephants, bison and deer, get deep into jungles and feel the gentle sea breeze along the coast, this is the ride for you. On this trip, water comes in two flavours, fresh and salt. The Southern Odyssey starts with a chance to visit the birthplace of your bike – the Royal Enfield factory – and a training session on a race track with guidance from some of our most experienced factory riders. East Coast, West coast and the southernmost tip of the Indian mainland – all these are included in the itinerary of the Southern Odyssey. Apart from this, the convoy of Royal Enfields will pass through picture-perfect tea, coffee and spice plantations – the very reason why the world flocked to Indian shores for centuries. The Southern Odyssey gives you a chance to experience your Royal Enfield over these magical roads. Rediscover the south, rediscover yourself.

Go to next page for detailed official info on Rider Mania

For three days starting November 19th 2010, hundreds of Royal Enfield Riders from all over the country will converge at The HillTop, Vagator in Goa for the Royal Enfield Rider Mania 2010. This is The Biker Fest representing a family reunion of Royal Enfield Riders who follow their heart and get together to celebrate “The Thump that Binds” them together. The event in its eighth edition is the one where you meet passionate likeminded Royal Enfield fans (fanatics) and bond as a single unit, swap ride stories, discuss motorcycles, and pit against each other in competitive events like Dirt Track Racing, Trials, Slow Race, Arm Wrestling and the unique ‘Carry your Royal Enfield’ event. After sundown the party begins with Rock bands and DJ’s belting out some cool music late. Other major attractions would be the access to rare Royal Enfield Literature and video footage from the archives and genuine Royal Enfield merchandise. There would be stalls selling Riding Gear, tattoo artists and lots more which would ensure that you carry back something more apart from just fond memories of the Royal Enfield Rider Mania 2010.

This is one event which neither you nor your Royal Enfield would want to miss out on. So pack your bags, check your bike and head out for Royal Enfield Rider Mania 2010 when all roads lead to Goa !!

For details and to register online check out https://www.royalenfield.com/ridermania