Home Features Motoroids Inside Ford India’s Chennai plant: See how your Figo / Fiesta / Endeavour is made 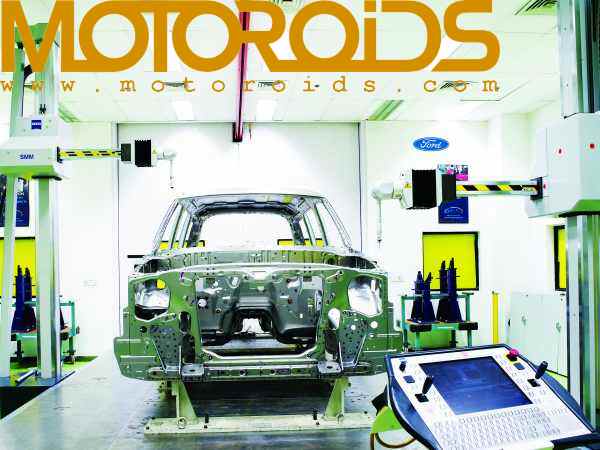 Ford India’s Chennai plant, see how your figo, fiesta and endeavour is made at the assembly line

I still remember the time when I first went to Toyota’s Tsutsumi Plant in Toyota City, Japan. This was one of the plants where the company’s lean manufacturing processes and JIT (Just in Time) philosophy took birth. Although the level of automation in this plant wasn’t as high as some of the other plants I have seen, the systems and processes in place were breathtaking. Everything was simplified and optimized – a walk around the plant, and I knew why Toyota is so highly regarded in the chronicles of automobile manufacturing. But the most outstanding feature of the plant was the Japanese workers’ dedication. For the entire while we strolled around the plant taking pictures, taking and making gestures, not one of the workers bother to pay any attention to us. All of them were so immeresed in work that they were oblivious to anything apart from the task at hand.

So when I was invited by Ford to visit their newly expanded and modernized plant in Chennai, I was more than interested to see how this Indian facility fared when compared with one of the world’s best known automobile manufacturing plants I had seen some time ago. After an interactive session with Ford top management in India, the team of journos was taken to the factory floor, where we were to witness the transition of metal into automobiles. It was a revelation of sorts for me, to realize the seriousness with which carmakers are taking the Indian market nowadays. 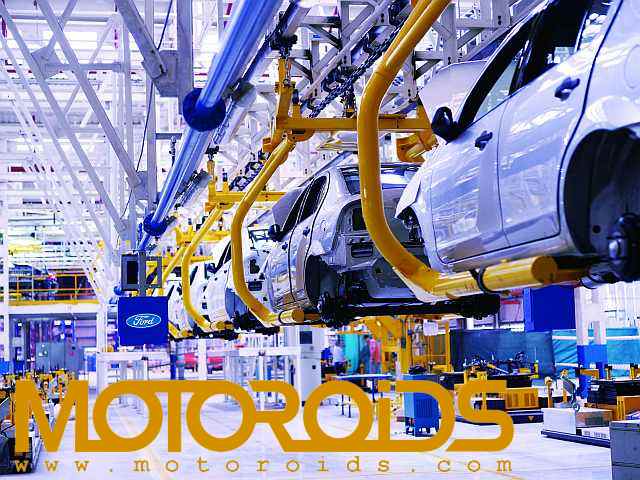 Now, the typical picture of Indian factories most Indians have in their minds (thanks to all those Amitabh Bachchan movies from the eighties), is that of a dark, dingy environ featuring a malnutrition-stricken middle-aged male banging his half-a-ton hammer on another piece of iron to no one’s benefit. This plant, however, is an extreme departure from archetypical inefficient Indian manufacturing plants. Modern, process driven, highly automated and driven by a workforce which averages 27 years – Ford’s Chennai plant is a shining exponent of the changing face of the Indian manufacturing industry. After a tour through the factory for about two hours, I came out thoroughly impressed, and with a totally altered perception about Ford cars’ quality and the company’s commitment towards India.  Read on for a detailed description of the salient features of the American carmaker’s Indian production plant. As a teaser, here’s an interesting video about ABB robots – the same ones used for critical processes such as welding, door hemming and sealing. You’re sure to get more interested after watching this clip.. let’s start the tour!

The gigantic mechanised lift that transfers tons of rolled metal to the area where this metal will be cut before being pressed by a state-of-the-art stamping system. 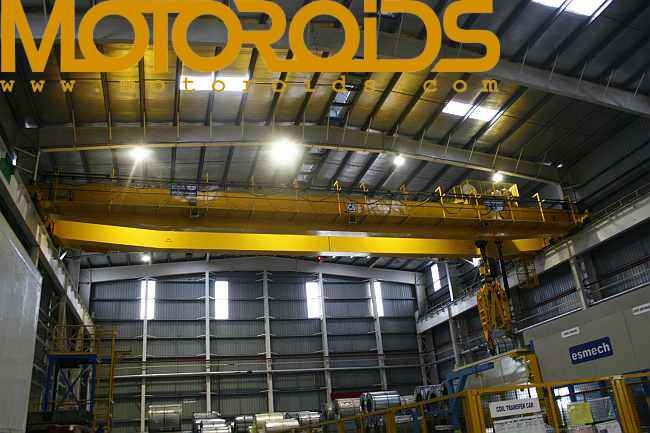 The rolled steel is brought here, where it is cleaned and uncoiled before being cut. 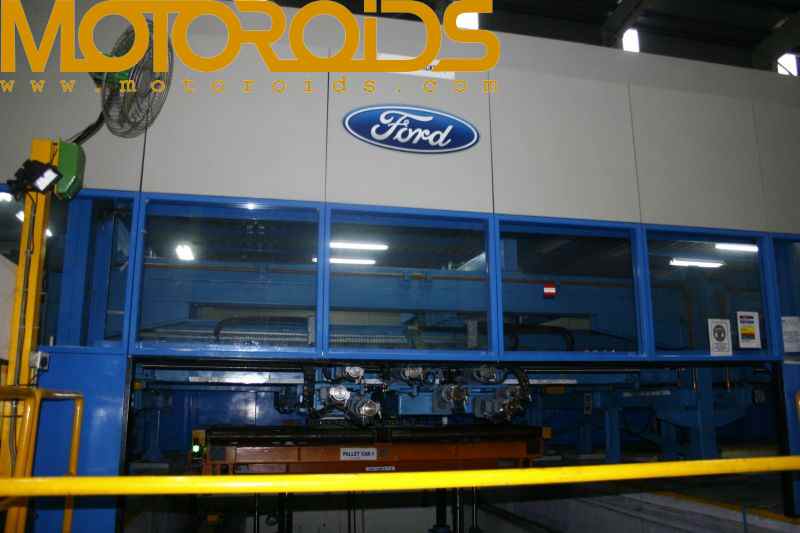 Improperly cut, and residual sheets are shown the way to the bin 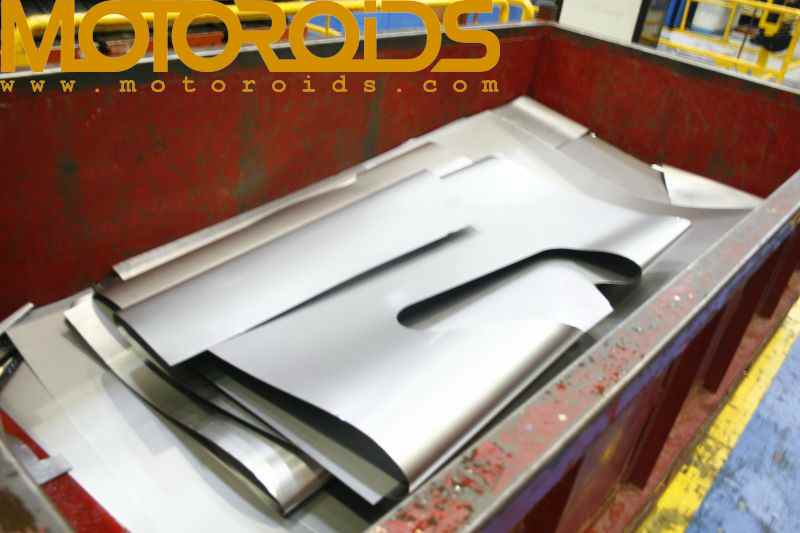 The gigantic stamping and press machine. This machines stamps the blanks into various forums which are later welded together to form the chassis and monocoque of the car. There are two press lines, augmenting the plant’s existing Schuler semi-automated single press line with a new Komatsu (Japan) press line, featuring fully automated crossbar technology, capable of producing 15 parts per minute. Komatsu press line is configured for quick die changes of less than three minutes adding flexibility to production schedule. Expanded operation facilitates a reduction in two days of the stamping cycle for production of sheet metal components.

The stamping plant incorporates new white light scanner technology for measuring the panels and dies. This “touchless” inspection method is used to measure all the stamping parts and dies for high levels of accuracy. 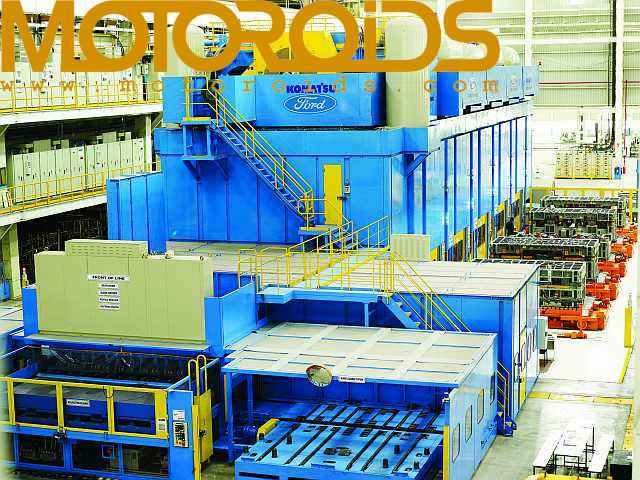 The stamped panels are then measured for perfect shape and dimensions. 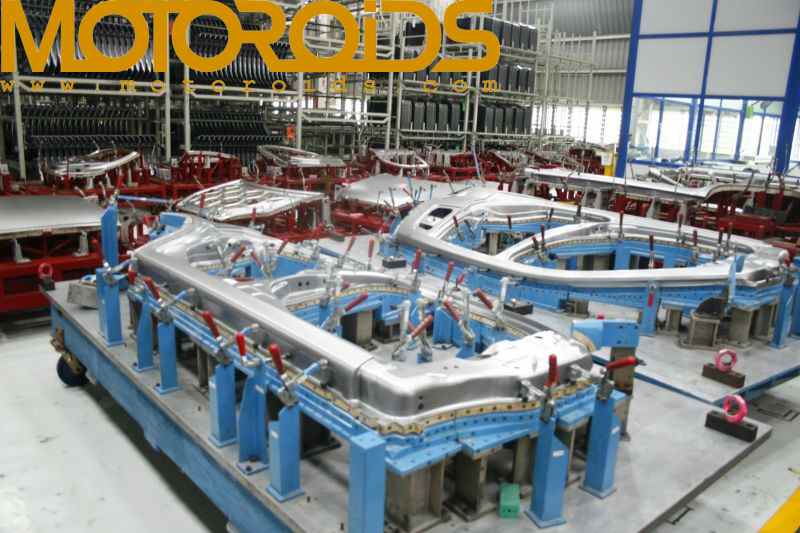 This is how some of the panels look after being freshly pressed. What you see here are the door panels of the Figo. Sheet metal is pressed into shapes of bonnet, roof, underbody and boot etc. The pressing line requires heavyu investment, and a high-tech pressing line as shown above may cost as much as 400 million dollars. 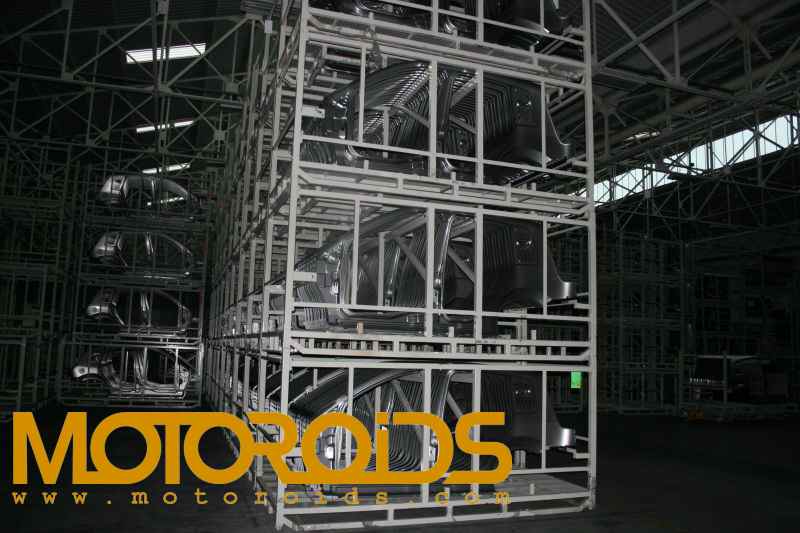 For the entire time I was at the Ford plant, I couldn’t spot much of manual welding. Almost all the welding is done by these high-tech ABB robots, taking the overall level of automation to more than 30%. Spot welding happens between various smaller panels to make a bigger panels. Then these bigger panels, forming the building blocks of the car are welded together to form the monocoque. It’s pretty neat the way the process is carried out. Very impressive, leaving very little chance for an error. 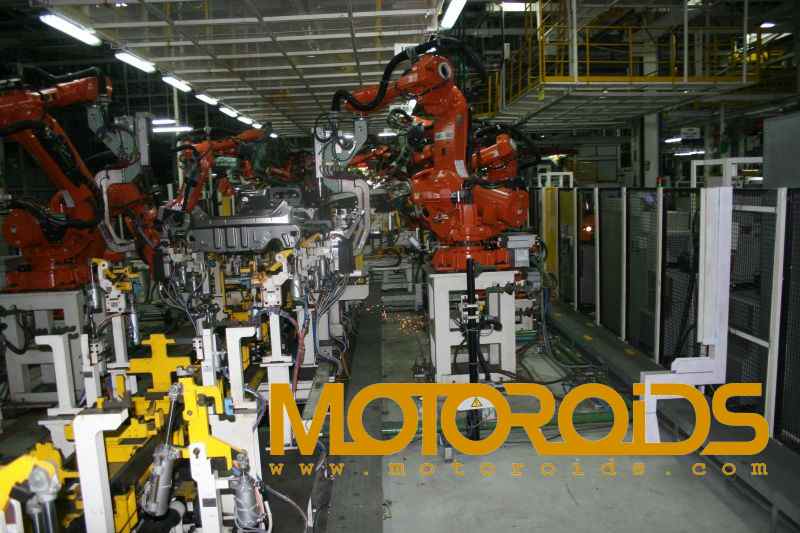 Some more robotic welding lines, joining various parts to form the basic structure of the car. 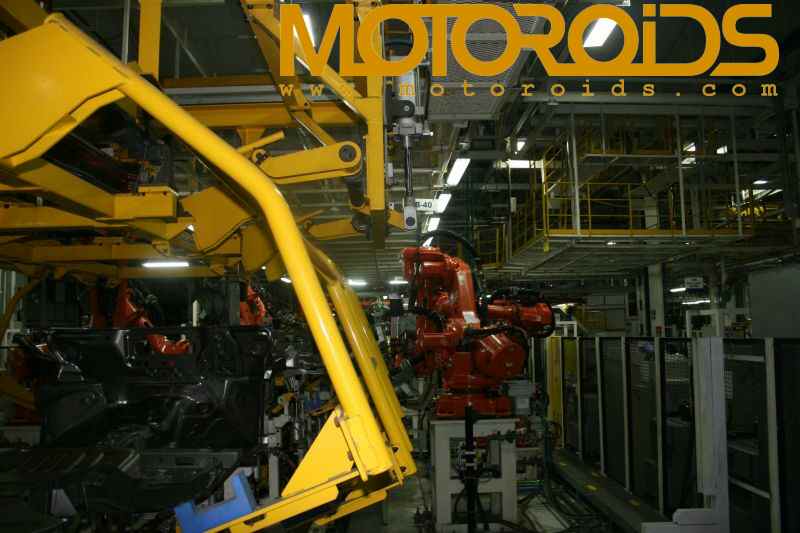 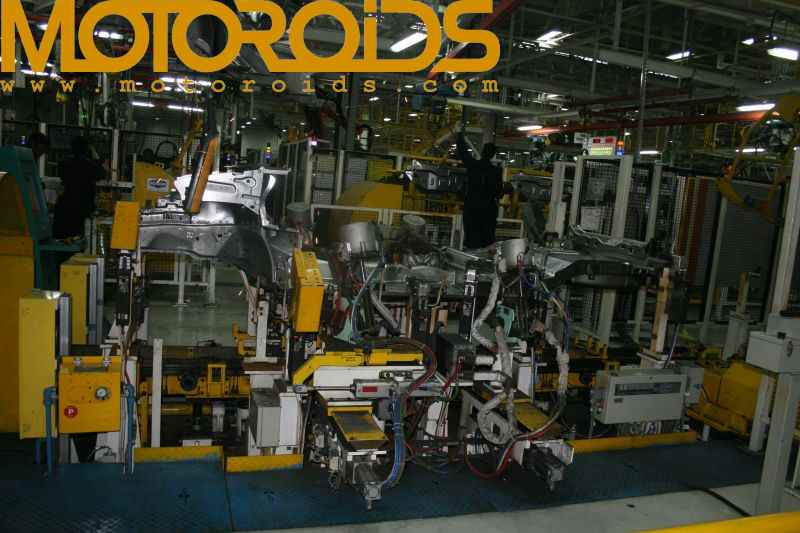 Here are some more interesting facts about the Body shop

Quieter than previous welding-gun technology, they deliver high-quality welds which are cleaner, with reduced expulsion and burring. Servo motors allow the welding tips to be brought smoothly into place, helping to eliminate distortion of the metal and ensure stable weld pressure. 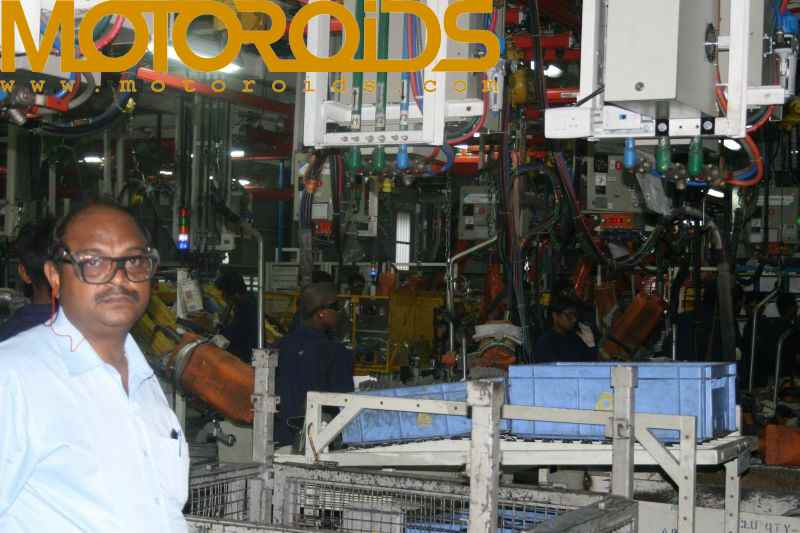 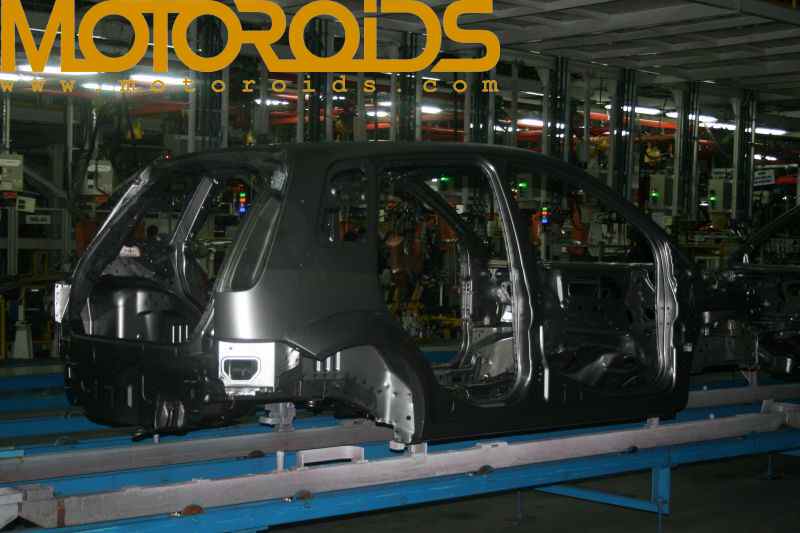 These indicators on every line, with every station on the line marked, makes sure that all the workers know what exactly is happening at any given station. If a process is unfinished or if there is an error at any station, it can be seen here. The indicator also tells the workers whether the production is happening ahead or behind schedule. 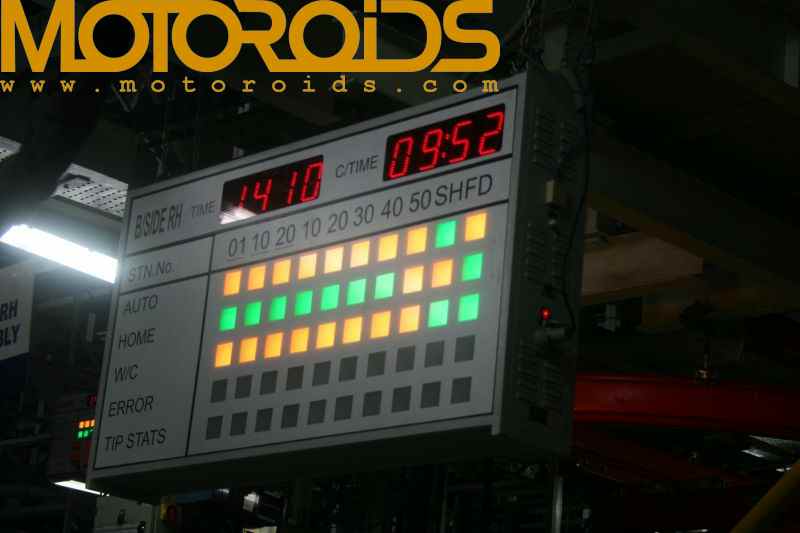 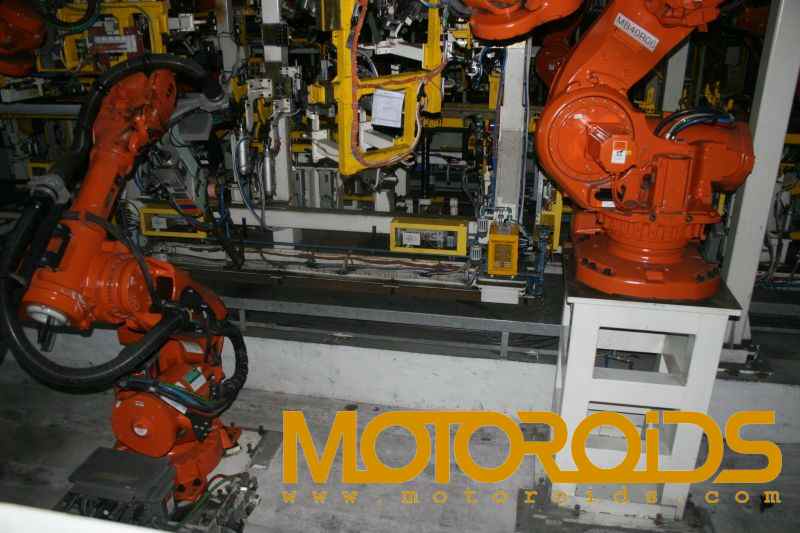 Status indicator lights at the assembly line. Every light says something if its lit up. 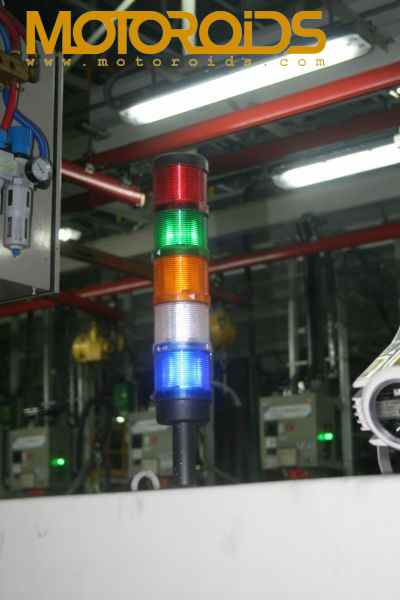 Stuff used by the workers at the Plant. Safety seems to be a big priotrity at this plant. We were really impressed on witnessing the organized manner in which the workers were functioning. 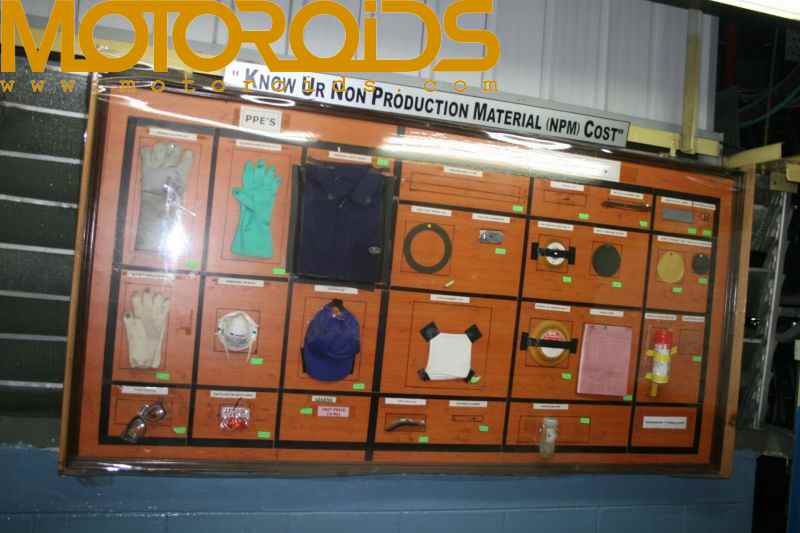 With all the body panels welded, now we see the ready frames being sent for painting. Ford boasts to have the most advanced paint shop in India. Their cars are painted with what they call Three-Wet technology which reduces the volatile waste into the enviraonment by upto 20 percent. Cother advantages, as claimed are a better finish and more durability. Some interesting facts about Ford’s paint line are as stated below 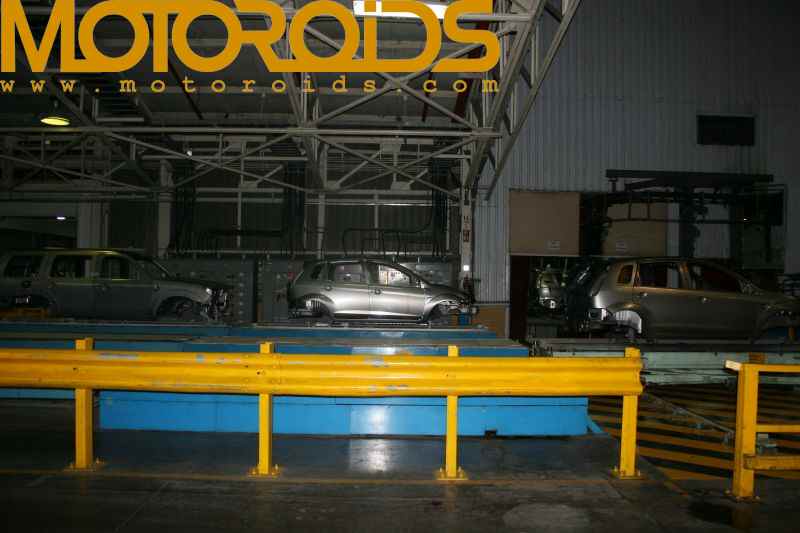 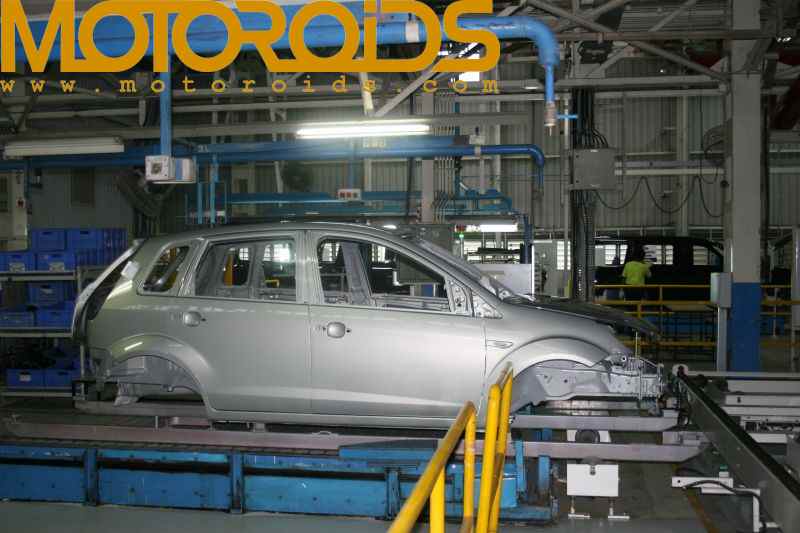 Painted cars being taken to the trim line, where they will be fitted with the electricals, interior furnishings, everything that needs to be fitted above the steel frame that is – apart from the engine and other mechanicals. Here are some salient points about Ford’s Trim Line 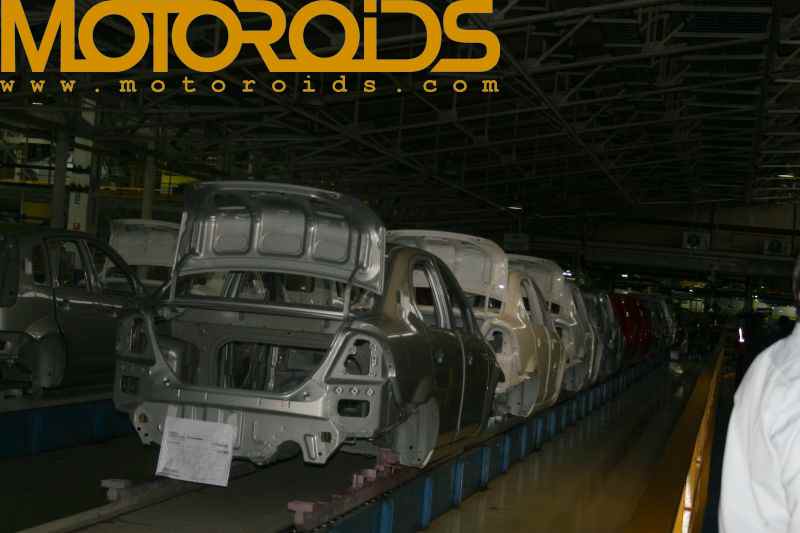 One major highlight of the plant was these guided vehicles. Just have a look under the cars – the platforms you see with green lights on them are guided vehicles which move along with the car at a distance and fit the engine on the way. This is made possible by remote sensing technology that keeps the car and the moving platform aligned. 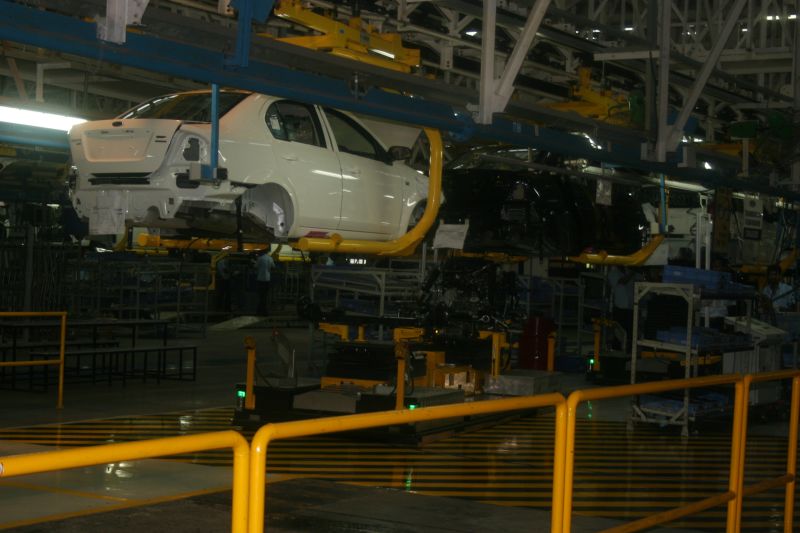 Final inspection before letting the car out of the assembly line. The car will undergo a variety of tests 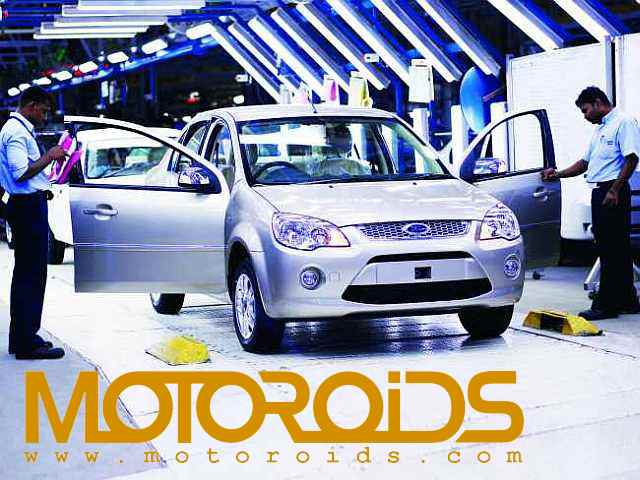 Hundreds of ready Ford Figos – they will disappear faster than you think knowing the tremendous demand we have seen for the car in the market. 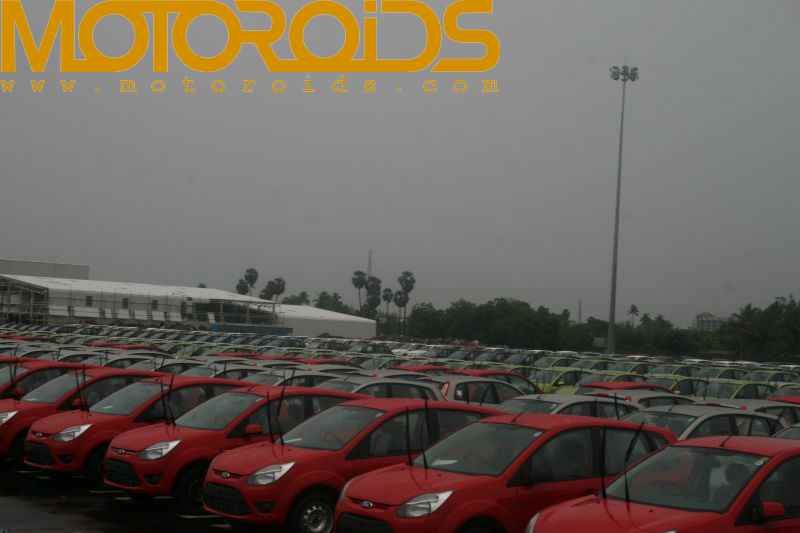 STAY TUNED FOR MORE STUFF ON FORD’S ENGINE PLANT, AND A DETAILED RESEARCH ON FORD CARS CoO (Cost of ownership)