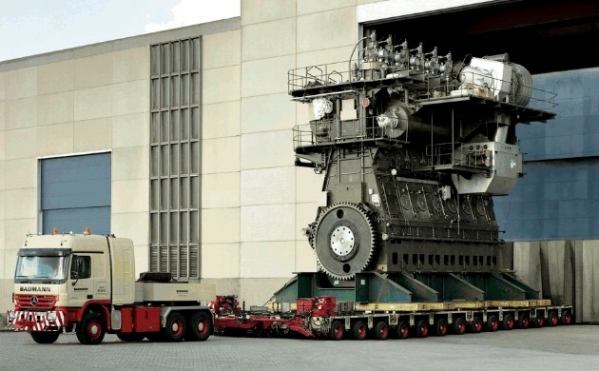 Say hello to the109,000 bhp Wärtsilä-Sulzer – the world’s largest diesel engine. What is it used for? Well, it propels ships which are twice the size of a football ground at a speed of around 60km/h, which is really fast by navy standards.

The engine that you see in that picture is 44 feet tall and 90 feet long. So what’s the size of the ships that this thing propels, if its own height is about as much as a four story building? Well, the first ship that the massive engine powered was the Emma Maersk – the largest container ship in the world when it was constructed in 2006.

Emma Maersk is all of 337 meters long. To propel the monster this engine employs 14 cylinders that consume 200gms of oil every cycle. The engine employs a two-stroke turbo engine with common rail technology. The rpm for this massive engine is 102rpm.

With only 25 such engines built till date, it’s really meant only for the biggest and baddest of cargo liners in the world. But seems like the production of such monstrous commercial ships has gone up too, with 86 such engine in the pipeline.