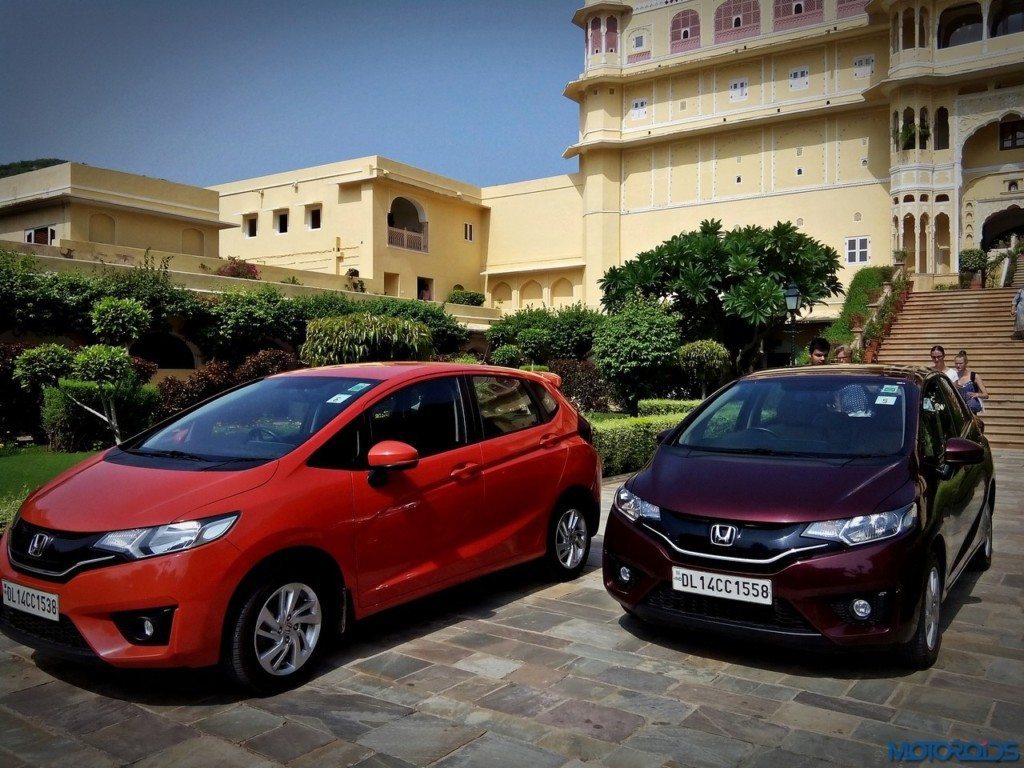 Honda celebrated the first Indian anniversary of its new, third generation Jazz by inviting journalists from leading automotive publications, including us, to Jaipur for reacquainting themselves with the premium hatchback. Launched in July 2015, the new Jazz accounted for 26% of total HCIL sales during the past 12 months, and is now a strong volume model in the company’s model line-up. The Jazz registered sales of 47,335 units from July 2015 to June 2016 and is among the preferred car brands in India. The two-day event involved Jazz-specific activities and a treasure hunt in and around Jaipur city. 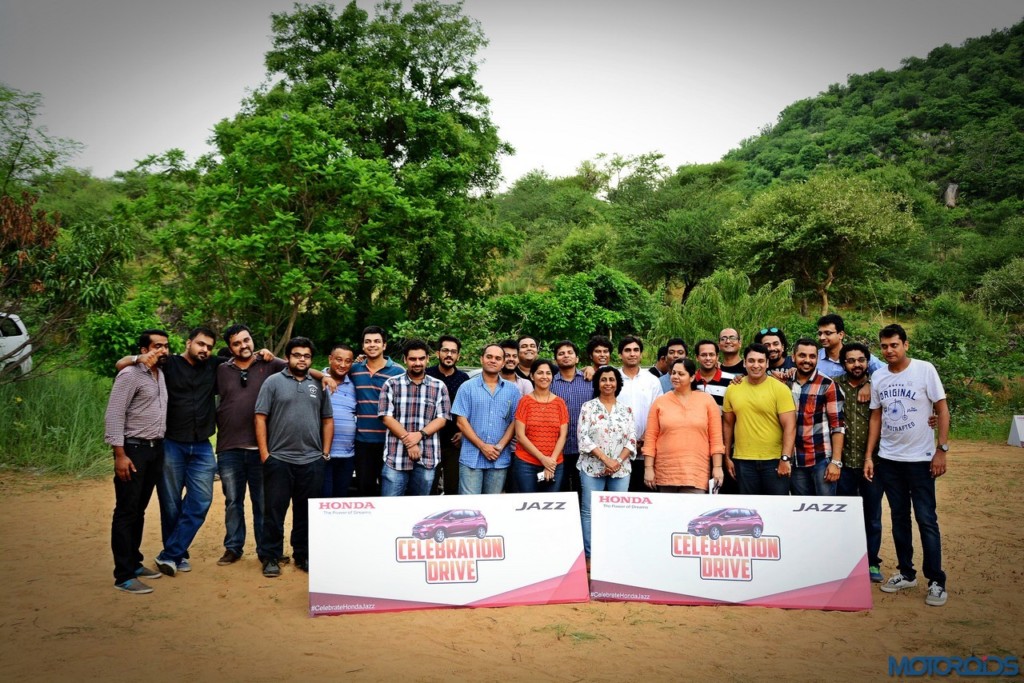 Touchdown at Jaipur saw us being whisked away to the Marriott hotel, which was nearby. As compared to the squelchy, humid Mumbai clime, Jaipur was still baking in the sun, with a 30-degree Celcius, dry heat trying to parch your nasal veins with every breath you took.  After a hearty lunch, we set off towards Samode Palace in our designated Jazz premium hatchbacks. The brief drive to Samode from Jaipur (around 60 km) was uneventful, apart from the chaotic city traffic calling for a couple of close shaves. 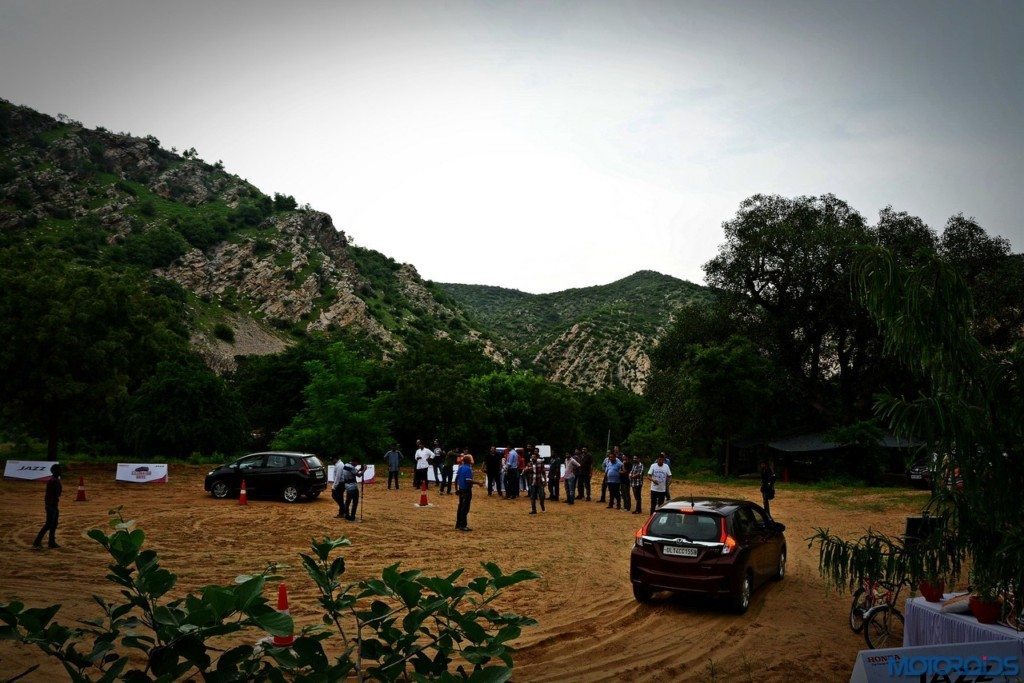 Out on the highway, our Jazz diesel got a chance to stretch its legs, its tractable engine providing adequate performance, while its complaint suspension religiously soaked up the undulations on the road, which were caused by the heavy trucks speeding over asphalt rendered semi-viscous by the raging sun. As the skies threatened to open up, we reached Samode, but right before the destination (Samode Palace), we veered off into a sandy trail that branched off from the state highway. This trail led to a clearing amidst the sparsely vegetated and rocky landscape where the Jazz-specific activities scheduled for the day were to take place. 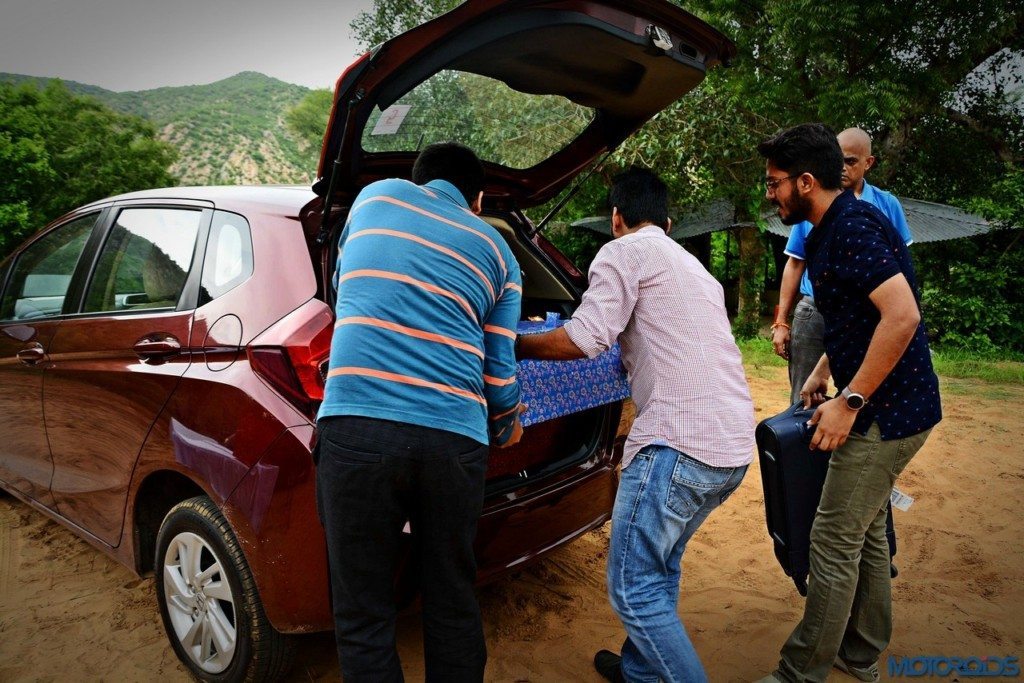 The first activity involved the Jazz’s Magic Seats. We were divided into six groups, and each group had to cram three items into the Jazz’s cabin using the Magic Seats; one item at a time, in the lowest time possible and using all the modes. The items included a bicycle and a couple of plants in pots, while in the end, we had to utilize the reclining function to the fullest by lying down, replete with a blanket and pillow. 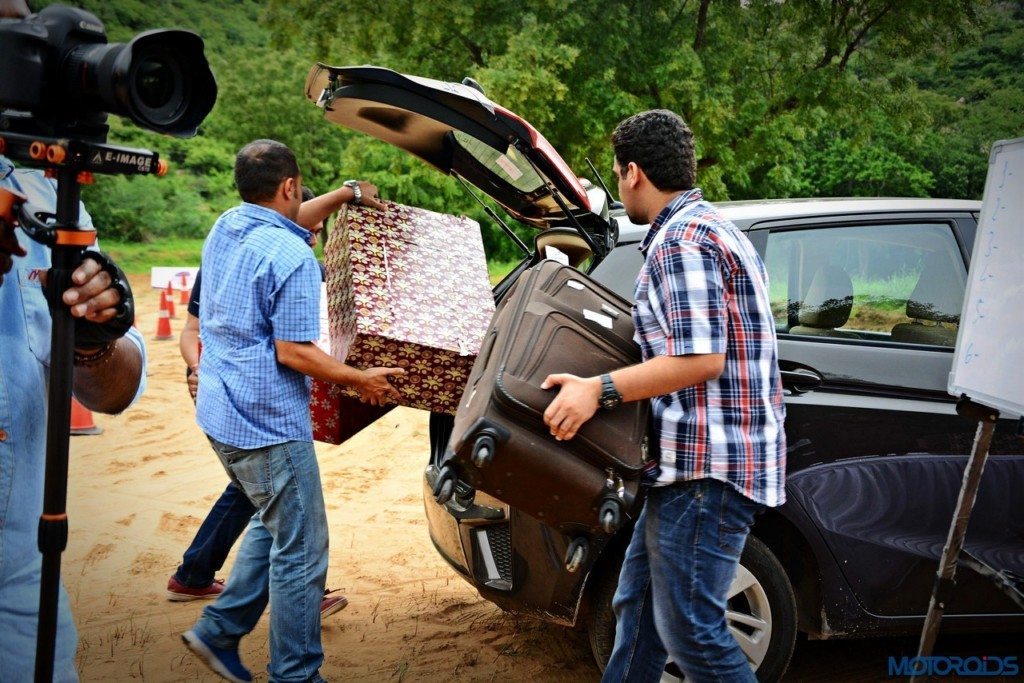 In case you’re unaware of the Magic Seats option, let me explain. A lower-profile fuel tank mounted under the front seats frees up under floor space beneath the rear seats, enabling the platform to accommodate the flexible Magic Seats system, available only on the top-end variant. Each of the 60:40 split Magic Seats in the rear can adopt numerous configurations to maximize the versatility of the spacious interior. The four configuration modes are Utility Mode, Tall Mode, Long Mode and one with the most spoils – the Refresh Mode. 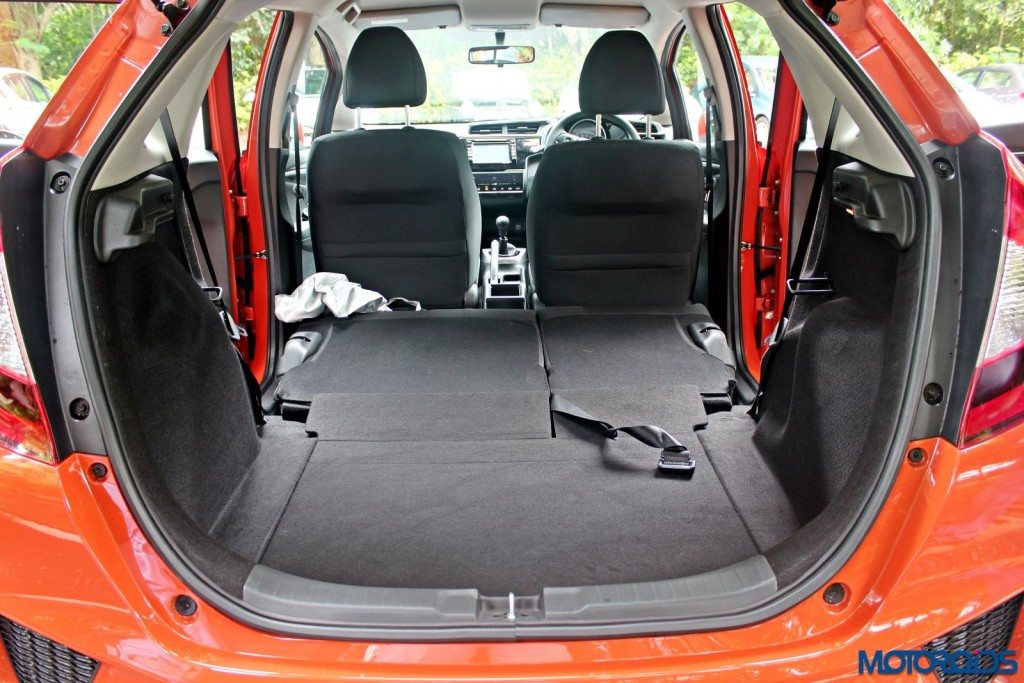 In Refresh Mode, the rear seats now also allow one to form a recliner by pushing the front seat backrests fully till it meets the rear seat base. Another segment first feature is the adjustable rear backrest, again, available only on the top end variant. A bit of hustling followed, and first the bicycle went in from the back, positioned diagonally using the Long Mode. Post that, the two plant pots went in the second row, with the rear seats completely out of the way using the Long Mode. Finally Refresh Mode allowed one person to completely recline as described before. 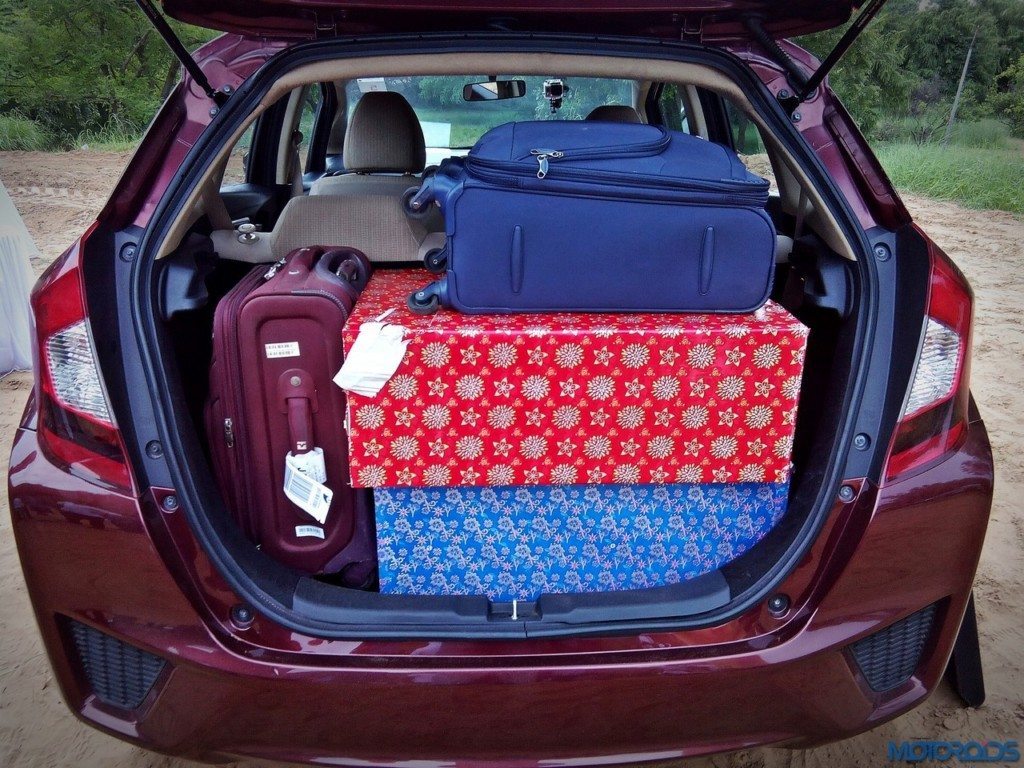 All the teams did well, and apart from the confusion and the jibes, the activity successfully demonstrating the versatility of the Magic Seats. The second activity involved the Jazz’s 354-litre boot, which increases to an impressive 881 liters with the rear seats down. Each of the teams had to accommodate a few boxes and suitcases in the boot. The team with the most amount of luggage in the boot was declared victorious, and our team came second. 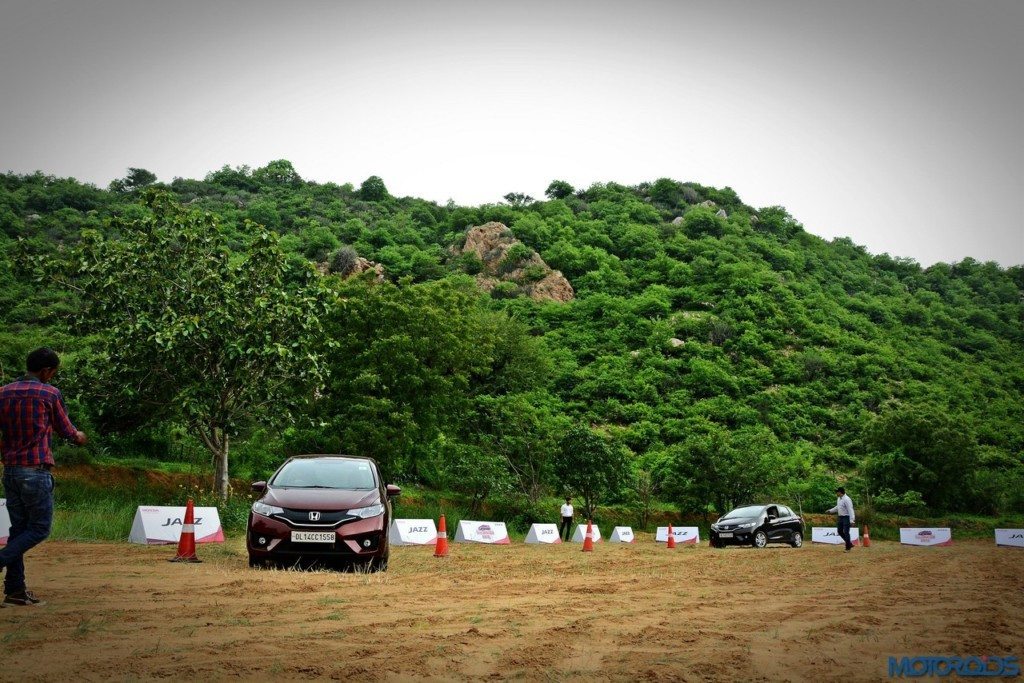 The third activity involved a slalom run in the dirt to demonstrate the short turning radius of the Jazz. Unlike other slalom runs however, this one was far tighter, with the cones being placed in close proximity to each other. One had to literally reverse the car and gingerly crawl to negotiate the slalom run without touching (or even missing) the cones. Every individual had a go, and the team with the least average time around the course was declared victorious. 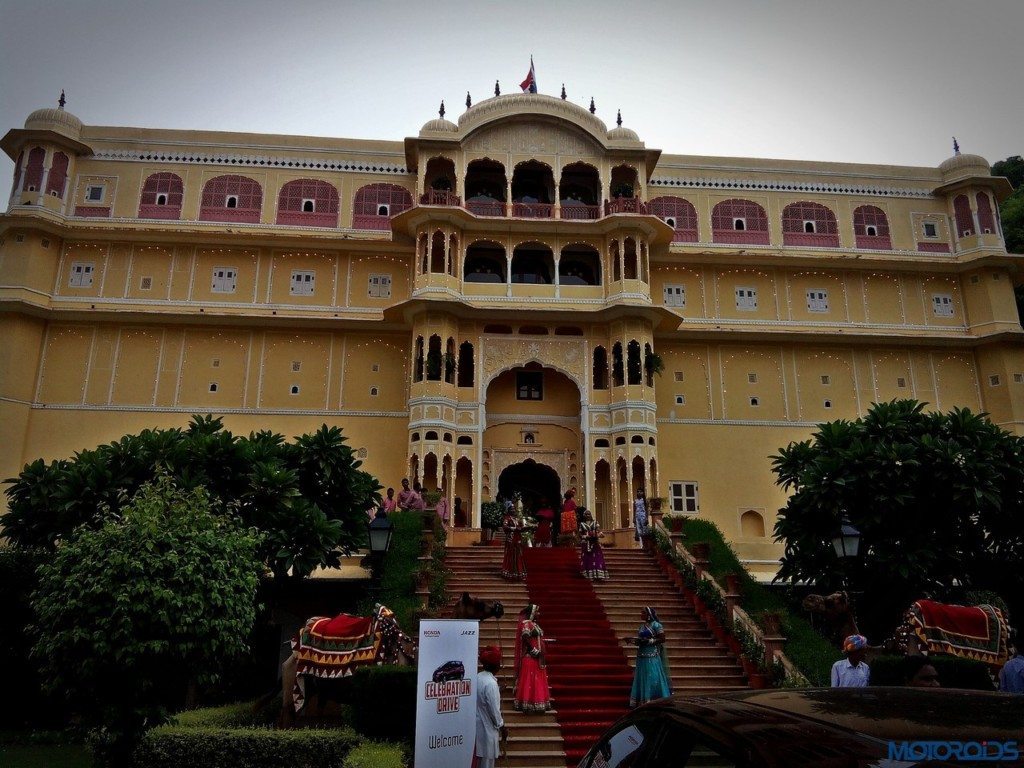 Results aside, the third activity successfully demonstrated how nimble the Jazz is in tight situations. Once the activities concluded, the birds were flying home, and we headed to the luxurious Samode Palace hotel, a heritage property with an old village at its footsteps. Once we reached the refurbished palace, we received a welcome fit for a king, replete with rustic, live music, along with local damsels garlanding us and showering us with rose petals. 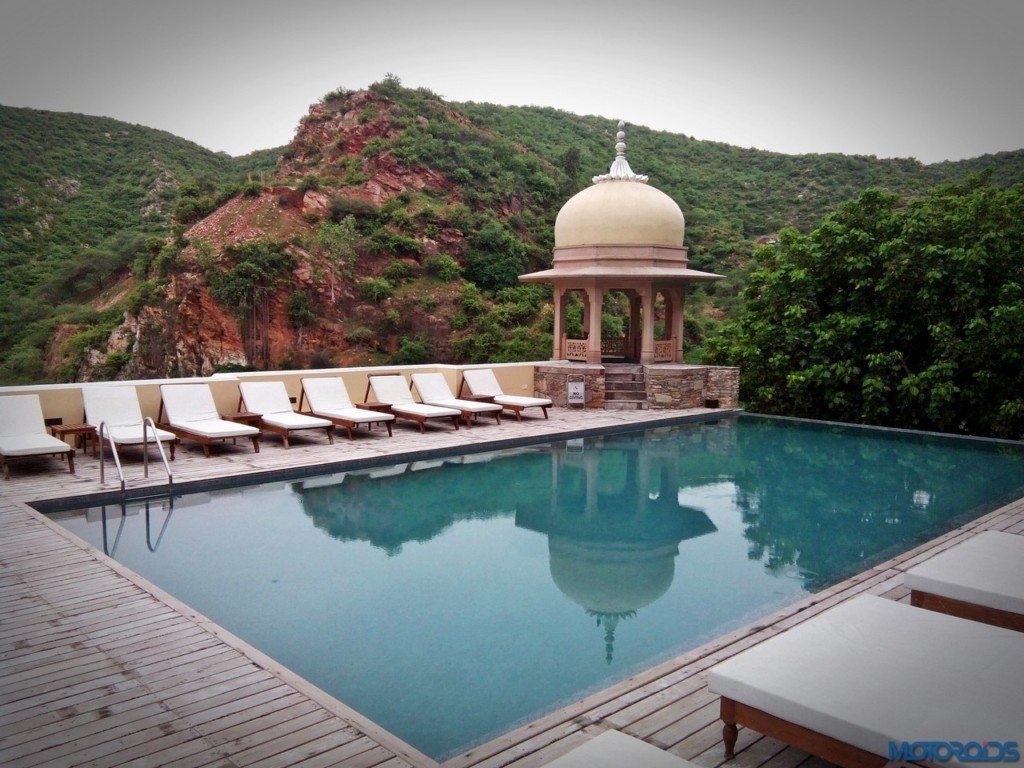 We were guided to our rooms, which were understandably lavish, but the highlight of Samode Palace for us petrol-heads was its collection of classic and vintage cars. It wasn’t a massive collection, but whatever was there was enough to satiate our automotive senses that have long been neutered by modern cars and their digital cacophony. The collection was topped off by a classic Mercedes-Benz 180 finished in pristine blue, while a vintage Talbot convertible, along with a ’45 Chevy sedan also deserves a special mention. 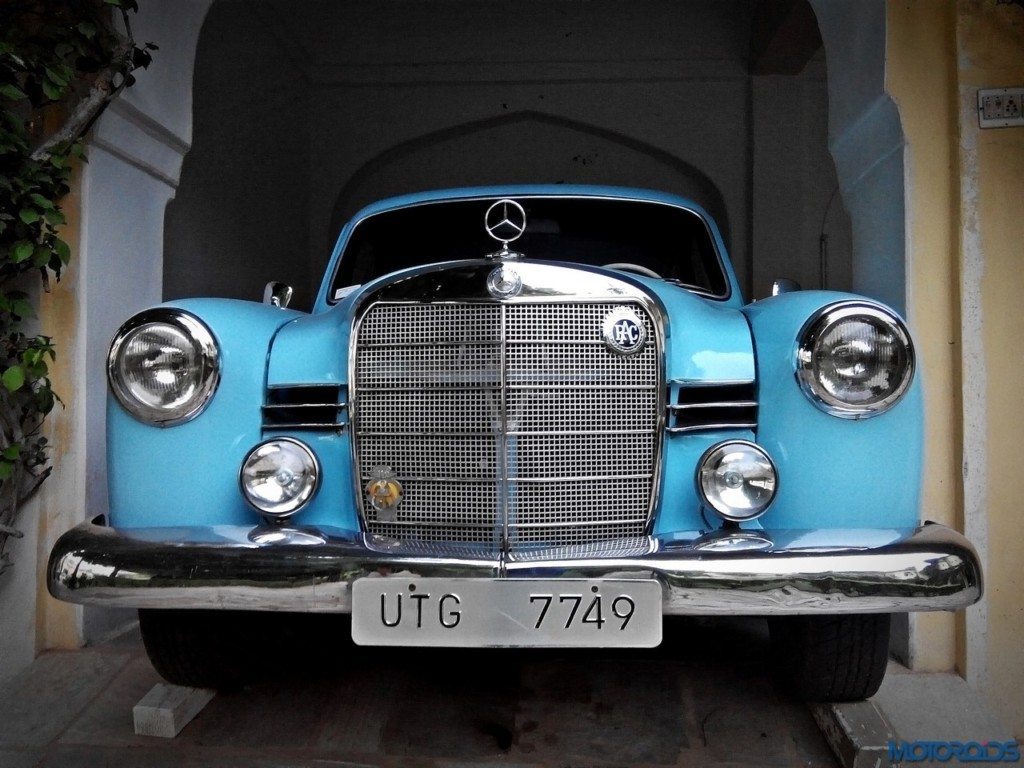 After gawking at the cars, we freshened up inside our rooms, and got ready for the cocktail party, which was followed by dinner. The party was great, and it was fun interacting with like-minded people. After the get together, we called it a night. The next morning, we started our drive to Jaipur, but this time, there was the final ‘Jazzing in Jaipur’ activity, which was basically a pan-city treasure hunt, involved. The arrangement of the six teams continued from the other day, and each team was given the same clue. 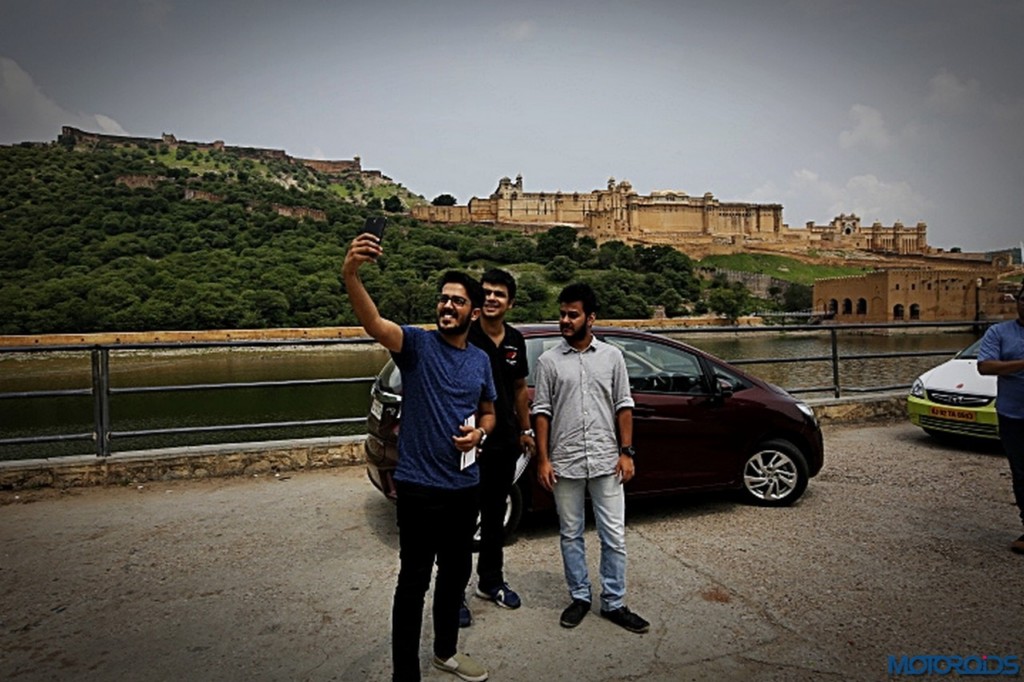 The first clue stated that we had to drive down to a place in Jaipur, which is renown for its elephant rides, apart from its collection of forts that is. Lucky for us, we had a local journalist in the team, and he identified the place in a jiffy – the stunning Amer Fort. Destination locked, we made a dash for Amer Fort from Samode Palace. Our navigation systems showed two routes – a 70-odd km run on the highway, and a 50-odd km run through the city. We made our calculations and took the latter, but alas, fate was not on our side. 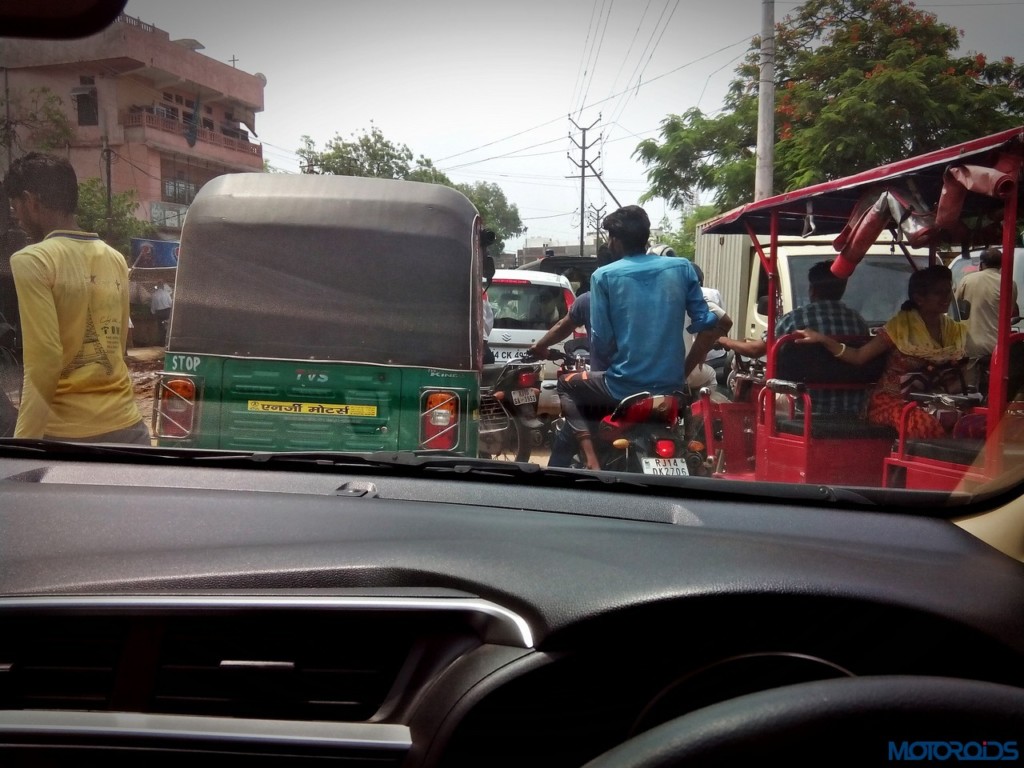 Our city run came to a grinding halt, as the route we chose passed through the annals of old Jaipur, infested with lanes barely wide for a couple of cars to pass. Throw a multitude of people, errant motorcyclists, cattle, goats, cyclists, hawkers and construction zones into the mix, and you have a platter for slow driving. The Jazz did well to negotiate the infested lanes, with its compact dimensions, tractable diesel engine and light power steering cutting short the effort by a fair margin. 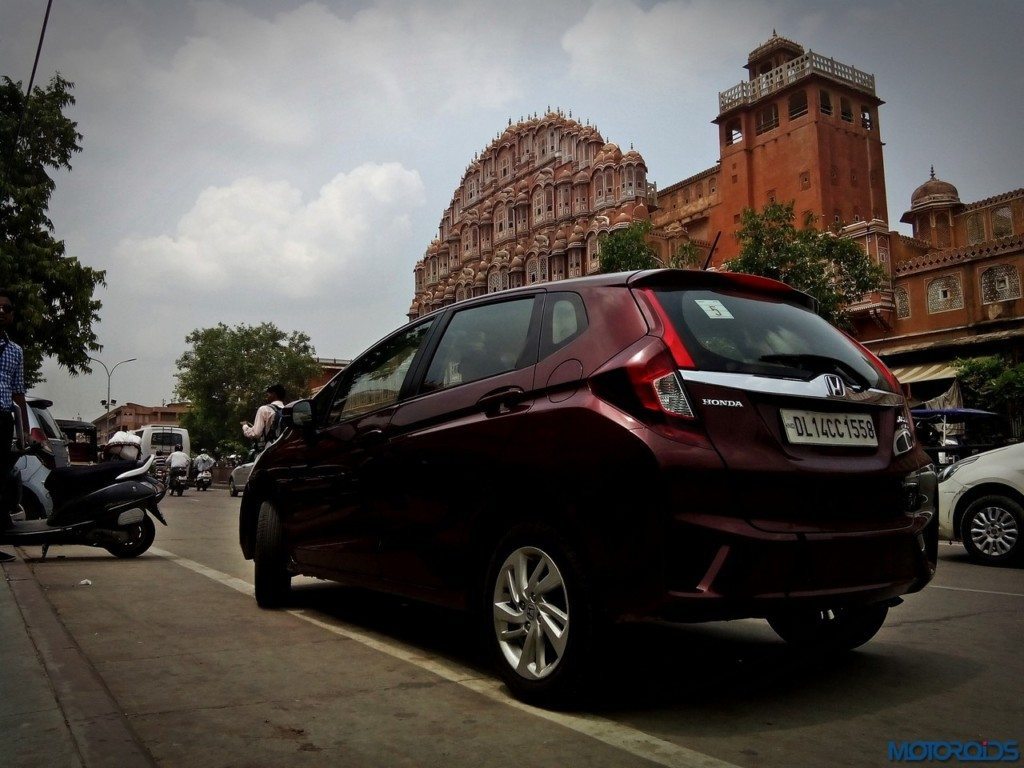 Still we didn’t do too badly, as we were the second group to reach Amer Fort, where we were given the next clue. It was quickly dissected by our local boy, and turned out to be the ‘Palace Of The Winds’, or the renowned Hawa Mahal. Located in the heart of Jaipur, this beautiful five-storey palace was constructed in 1799 from red and pink sandstone, while featuring 953 windows or ‘Jharokhas’ which are decorated with intricate designs. We made a dash for the tourist attraction, this time taking a longer but emptier route, but was still ten minutes behind the leading team by the time we reached there. 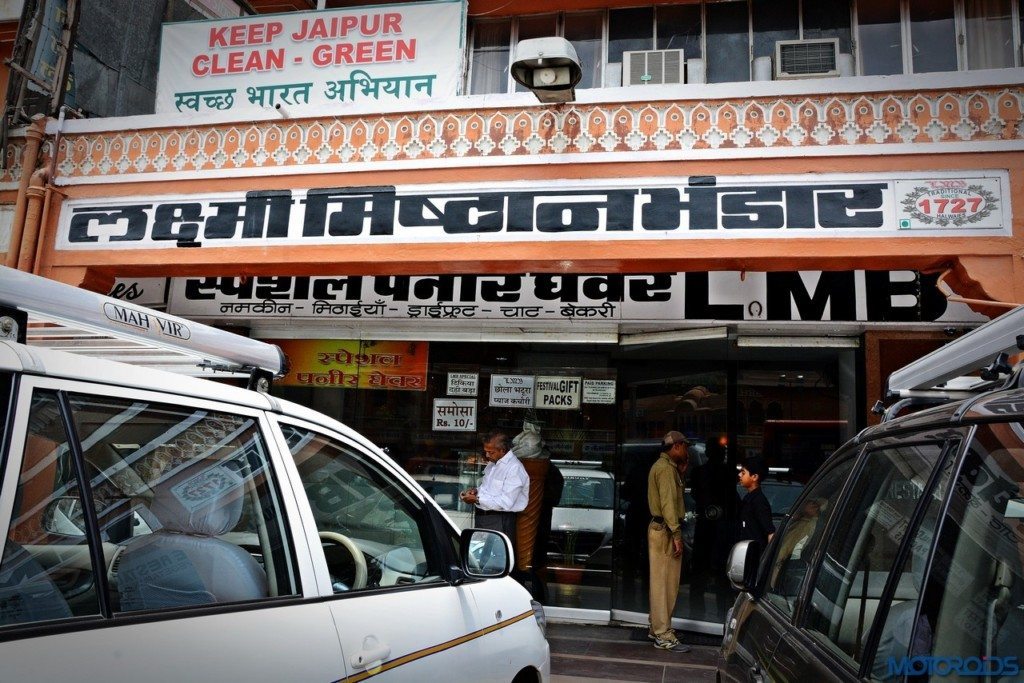 Upon reaching Hawa Mahal, we collected our third clue, which involved food, ‘kachoris’ to be specific. It was quicky decoded to reveal the destination – the famous Lakshmi Misthan Bhandar, popularly known as just LMB, a well-known sweet shop established in 1954, and located in downtown Jaipur in the bustling Jauhari Bazar, a few blocks ahead of Hawa Mahal. We made a rush for LMB, but were still second. A lip-smacking ‘dal-kachori’ later, we were rushing again, this time to the last destination, after decoding the final clue that we were handed over at LMB. 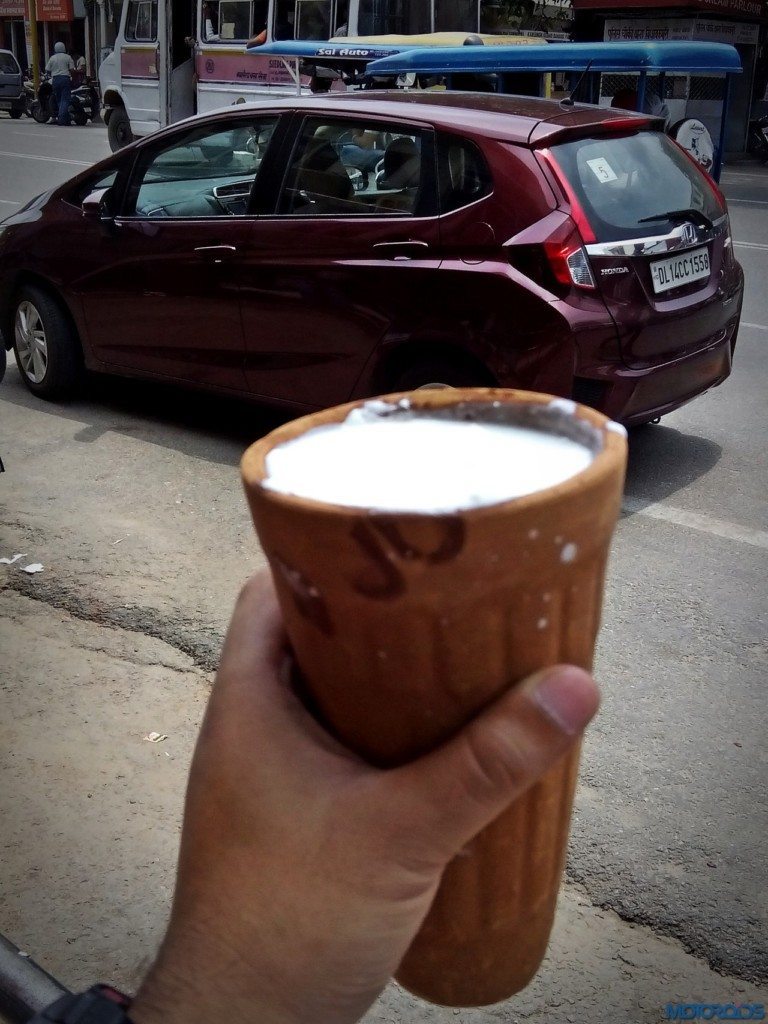 It was none other than the famed Lassiwala, a restaurant located on the busy MI Road in Jayanti Market. As the name suggests, the place is famous for its thick, creamy ‘lassi’, which is served in earthen glasses. A glass later, our treasure hunt ended with our team coming second, but the whole activity was bucket loads of fun! Exhausted, we headed back to Marriott hotel near the airport, freshened up, packed our bags, had lunch and caught our respective flights back home!