What sowed the seed for the performance motorcycling environment in India to grow, the 150cc bike segment in the Indian motorcycling space is still going strong. With times, as motorcycling evolved in our country, these bikes weren’t seen as performance motorcycles anymore and are now looked upon as power commuters, which also serve the purpose for that occasional weekend ride. Loaded with features, most offerings in this segment focus on style and offer decent performance, at a price, which won’t make a big hole in your pocket. Some of these 150cc motorcycles have also bumped up their engine displacement slightly, to gain an edge over their rivals. Looking to buy one? We list down the best 150cc bikes that are currently on sale in India. To make this list as comprehensive as possible we have included all the motorcycles straddling the 159cc and 160cc segments. However, follow this link  – 160cc motorcycles in India –  leading to our list of all the 160cc bikes in India if you are interested specifically in that category. 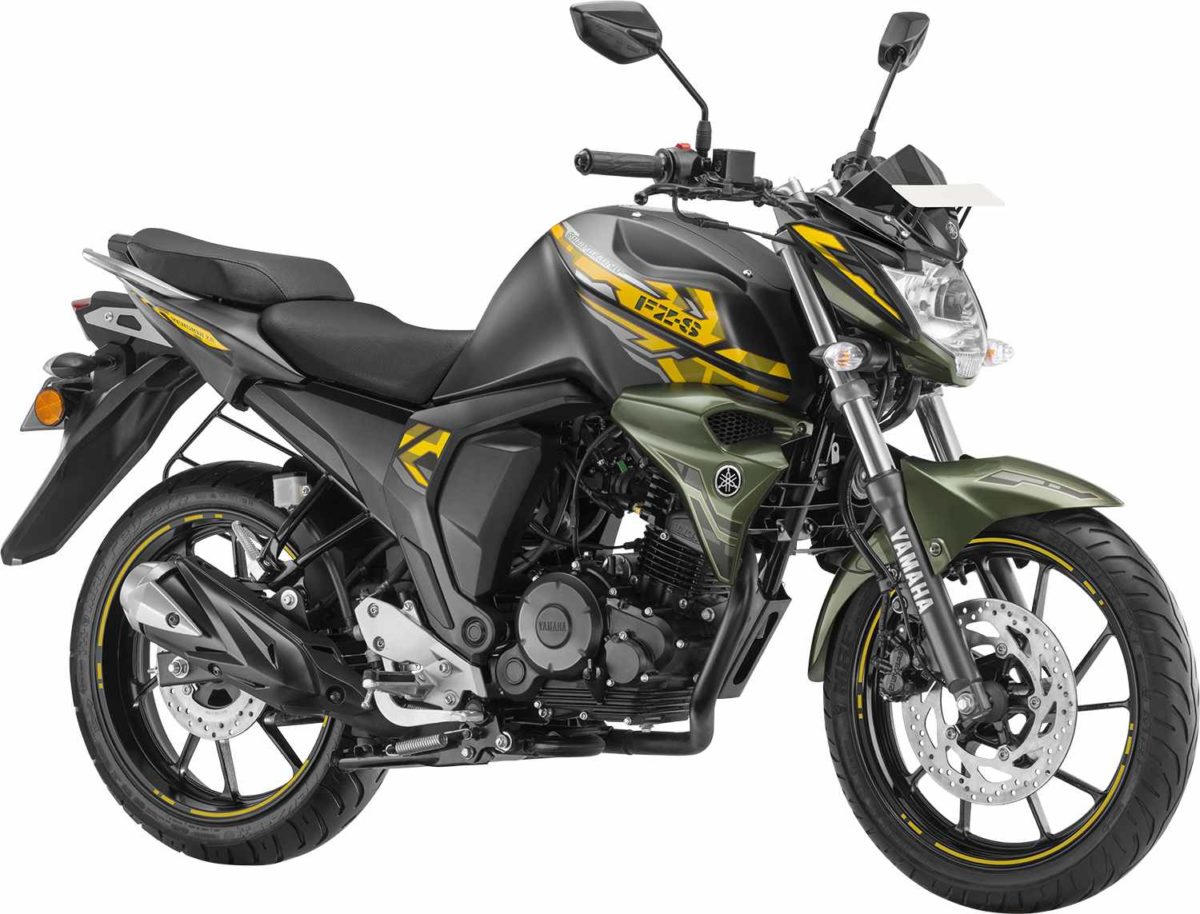 The Yamaha FZ S V 2.0 is one of the best motorcycles in the 150cc bikes category ever since it was launched in India. Due for an upgrade soon, it strikes the perfect balance between style, performance and economy. The FZ-S is powered by an air-cooled, 149cc, single-cylinder engine which is fueled by a closed loop injection system. The engine has been tuned towards being fuel efficient instead of being outright powerful, so it produces a maximum power output of 13.1 bhp and a peak torque output of 12.8 Nm. The company claimed efficiency figure for the FZ stands at 45 km/l. 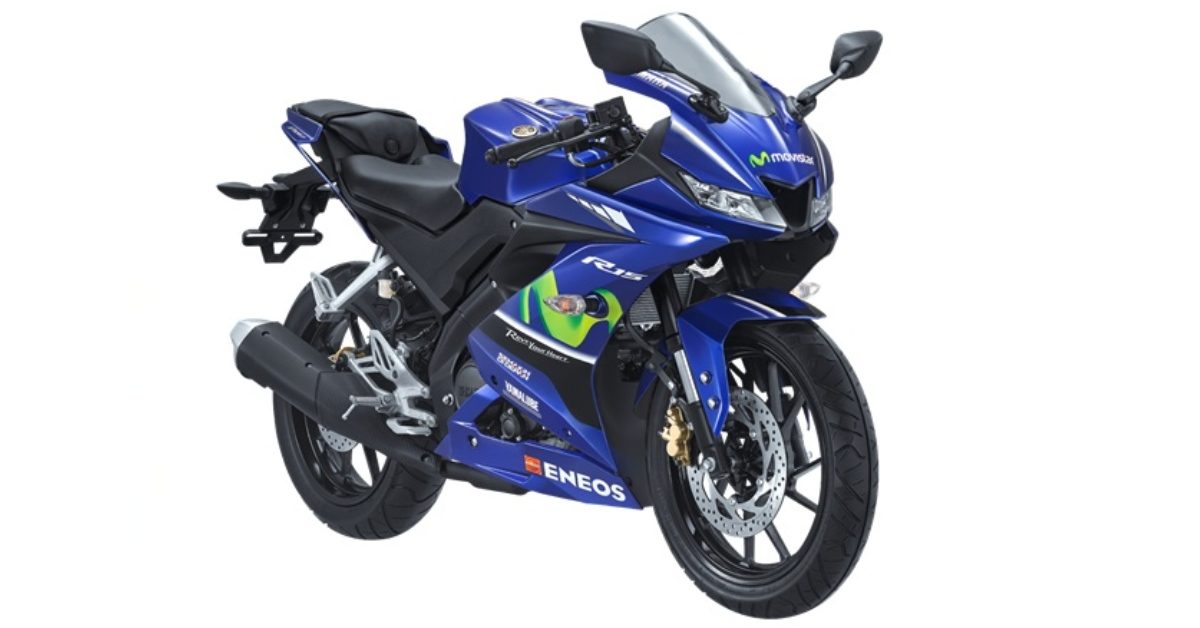 The Yamaha YZF R15 was recently updated and boy the bike has been doing well ever since. The bike gets a complete revamp and now looks much sexier with the YZF R1 inspired front end. The engine is rev-happy, and that, along with a butter smooth gearbox and a super slick clutch, make the YZF-R15 a joy to ride, be it in the city or on the highways. The R15 gets an updated 155cc single-cylinder motor that makes 19 bhp at 10,000 rpm and 15.1 Nm of peak torque at 8,500 rpm. Power to the rear wheel is delivered via a 6-speed gearbox. 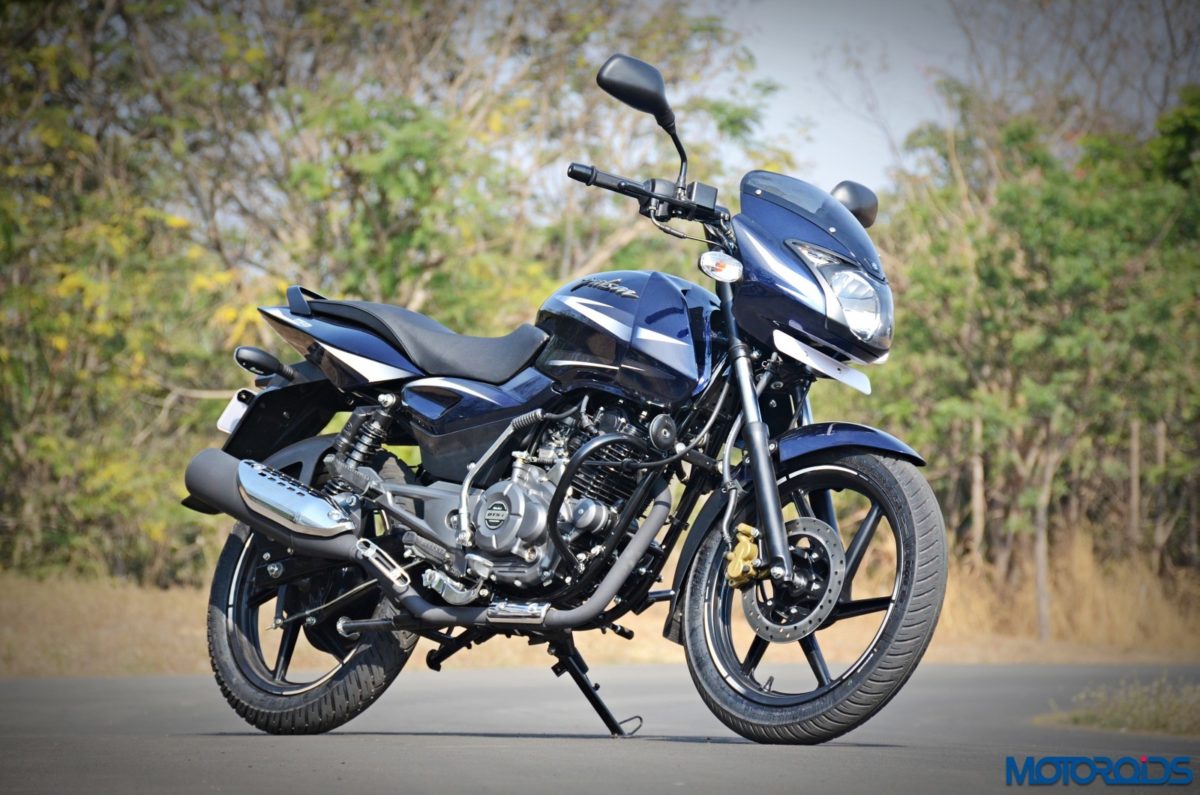 The oldest bike on this list, it has been on sale in the country since 2001, which is a long time. The motorcycle has been ruling the market for the 150cc bike segment for a long time but the competition has caught up with time and the design has started to show its age. The Bajaj Pulsar 150 draws power from a 149.5cc air-cooled, single-cylinder engine producing 13.8 bhp and 13.4 Nm of torque. The engine is mated to a 5-speed gearbox. 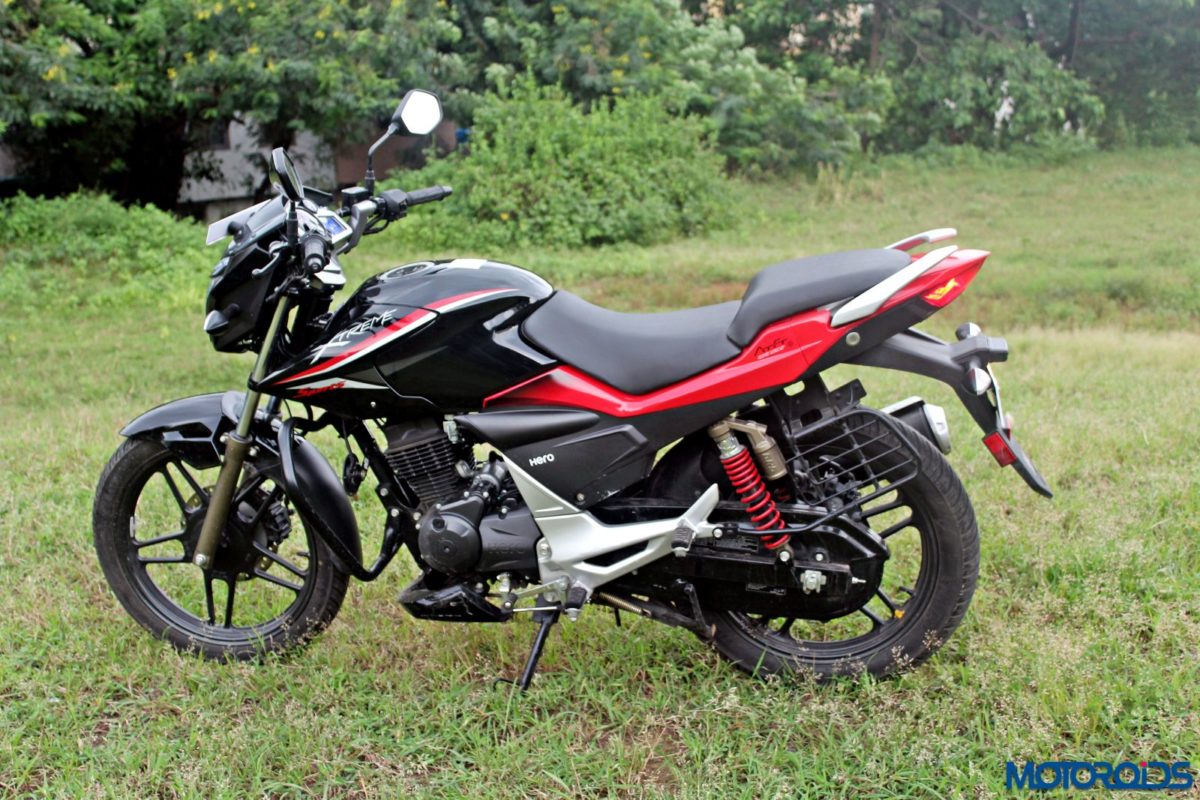 The Xtreme is one of the few bikes in Hero’s current portfolio, which satiates the need of customers looking for something more than just a commuter motorcycle. The Hero Xtreme Sports is based on the standard Xtreme but features several cosmetic and mechanical updates. The Xtreme Sports is powered by the same air-cooled, 149.2cc, single-cylinder engine used in the standard Hero Xtreme, but is now tuned up to produce a maximum power of 15.2 bhp and a peak torque of 13.5 Nm. Transmission duties are handled by a 5-speed gearbox, and mileage is claimed to be 48kmpl. 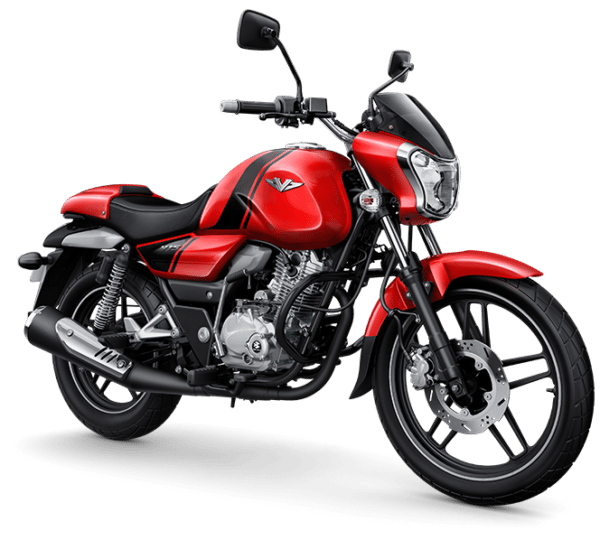 Bajaj has taken this commuter motorcycle to the next level. The V15 is Bajaj’s answer to premium commuters and it has been well received by the Indian motorcycle enthusiasts. Powering the V15 is an air-cooled, 149cc, single-cylinder engine which produces a maximum power of 11.8bhp and a peak torque of 13Nm. The engine is mated to a 5-speed gearbox and the Bajaj V15 returns a mileage of 57km/l. 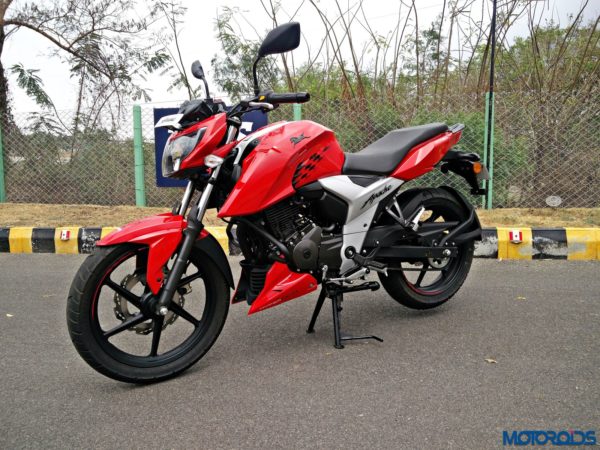 TVS launched the new-generation Apache RTR 160 4V, which takes the 150cc – 160cc game to the next level. The bike now gets a fresh new design, new body panels, attractive colour schemes and a completely new look and feel. The engine too has been thoroughly updated and it now makes 16.28 bhp at 8,000 rpm along with 14.8 Nm at 6,500 rpm. The engine is paired with a slick 5-speed gearbox and this without a doubt is one of the most exciting motorcycles on sale in this segment. 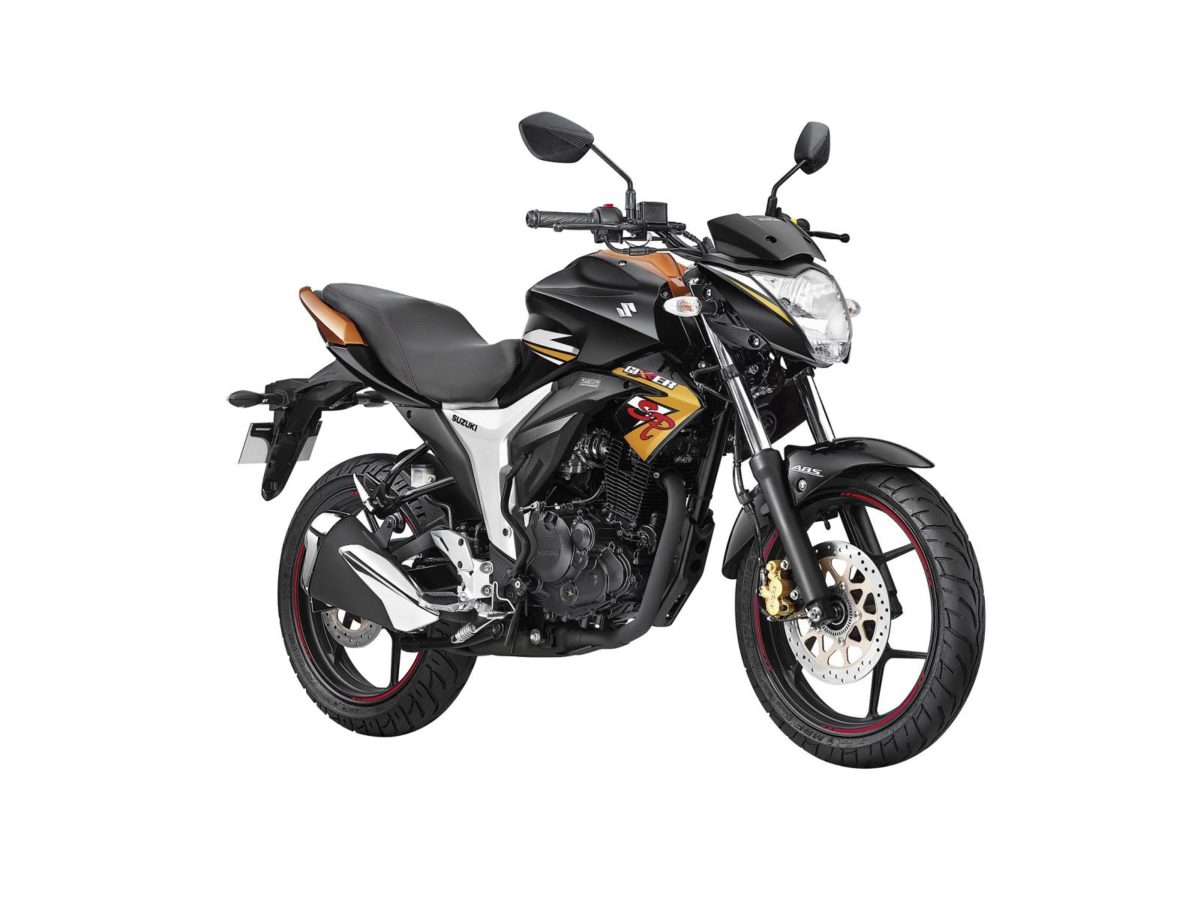 The Suzuki Gixxer rose to fame in the 150cc segment for its styling and aggressive looks.  Deriving its name from the litre-class GSX1000R’s nickname, this motorcycle is powered by a smooth 155cc single-cylinder, the air-cooled motor which belts out 14.5 bhp power at 8000rpm and peak torque of 14 Nm at 6000rpm. The bike gets single-channel ABS as an option and is due for an upgrade in 2019. 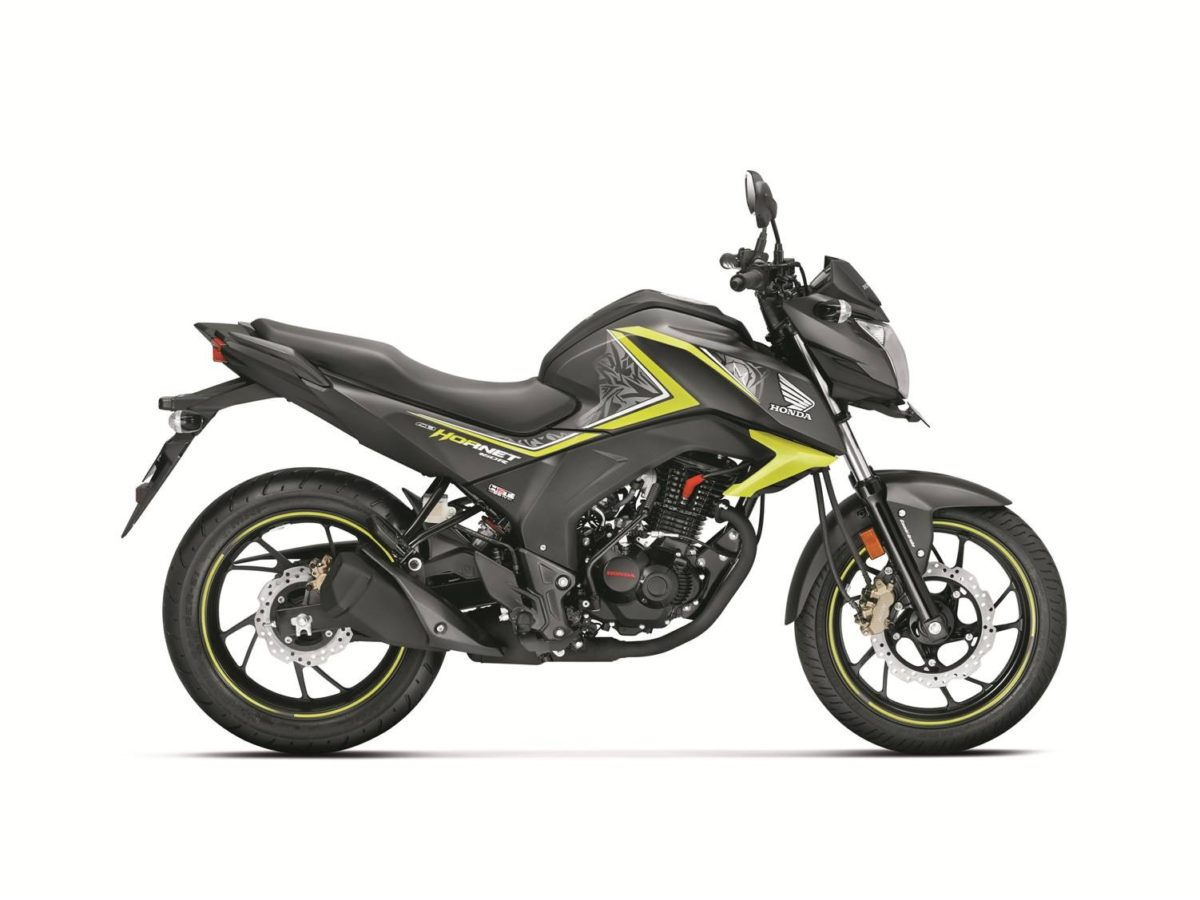 The Honda CB Hornet 160R is quite possibly one of the best looking premium 150cc bikes from Honda. Overall, the bike has got edgy styling with sharp creases all over. The bike gets an all-digital instrument console, LED headlamps and tail lamps. The engine is essentially the same unit of the CB Unicorn 160’s – a 163cc single-cylinder, air-cooled engine which has been tuned to make 15.7 bhp peak power at 8500rpm and 14.76 Nm of torque which comes mated to a five-speed gearbox. 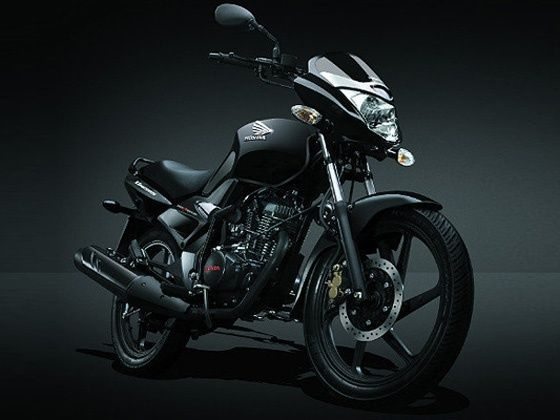 One of the oldest 150cc bike on sale in India, this bike changed the way people looked at commuter motorcycles. Back in the day, this was the first bike to bring mono suspension in the market and the butter smooth engine made it even more joyous to ride. But with time the bike started to show its age, it was discontinued by Honda and then relaunched in 2017 on public demand. The bike uses a 149.1cc SOHC, air-cooled, four-stroke engine featuring swirl induction for better performance. All of this helped the engine achieve peak power figures of 13.3bhp@ 8,000 rpm and peak torque of 12.8 Nm @ 5,500 rpm. Mated to this is a five-speed gearbox for smooth transmissions. The bike returns a mileage of almost 55kmpl. 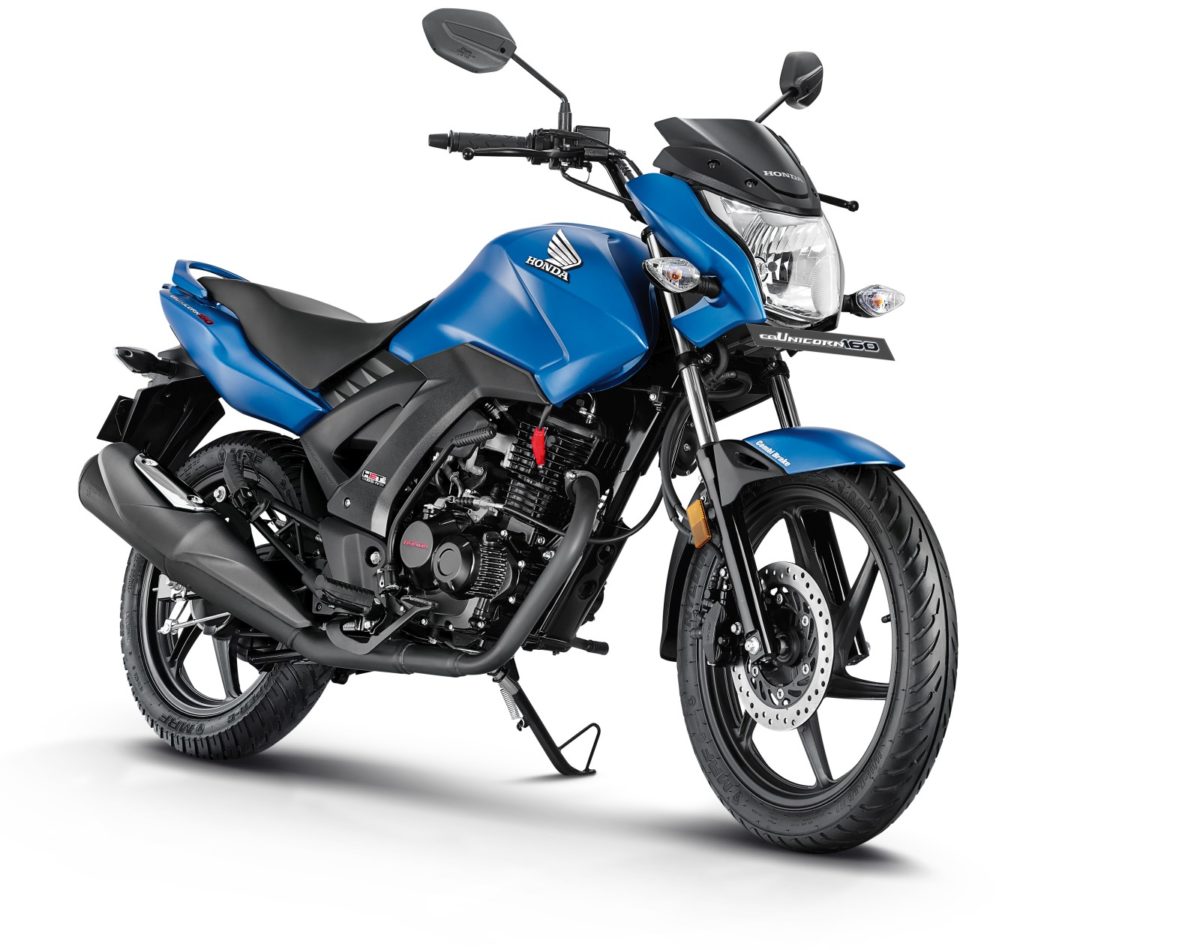 Honda revived the Unicorn nameplate with the Unicorn 160 some years ago. The bike sports a rather sharply-styled bikini fairing that lends it a sleek look. The bike gets a digital instrument cluster and comes with CBS. Powering the bike is a single cylinder 163CC engine produces a maximum power of 14 bhp and a peak torque of 14.61 Nm and it comes mated to a five-speed gearbox. 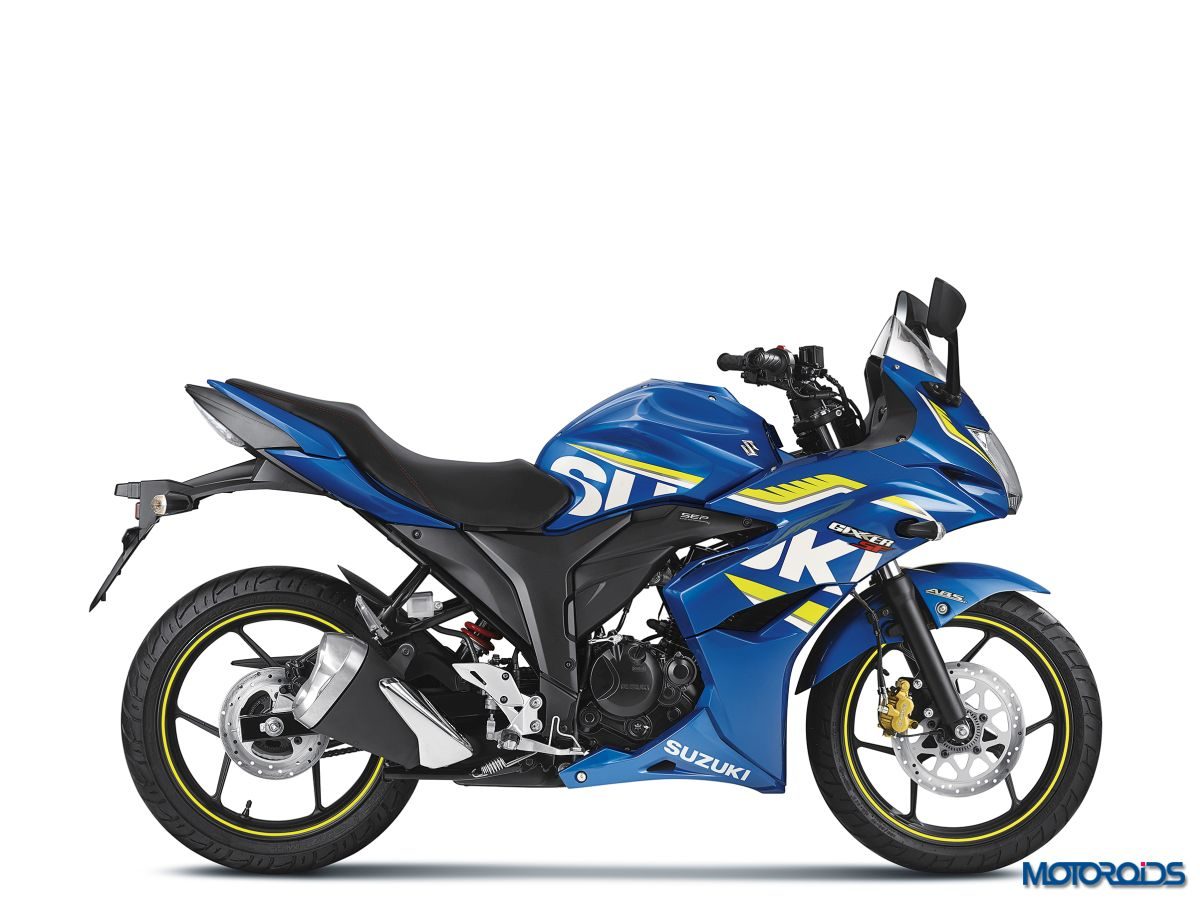 The faired version of the Suzuki Gixxer, the Gixxer SF is in fact even more popular in the faired motorcycle market as compared to its competitor the Yamaha Fazer V 2.0. The bike also gets a single-channel ABS for extra safety and it gets a disc at both ends. Gixxer SF series continue to use the 155cc engine with Suzuki’s Eco-Performance (SEP) technology. The motorcycles continue to draw 14.2 bhp of power at 8,000 rpm and 14 Nm of torque at 6,000 rpm from its 155cc single-cylinder, air-cooled engine. 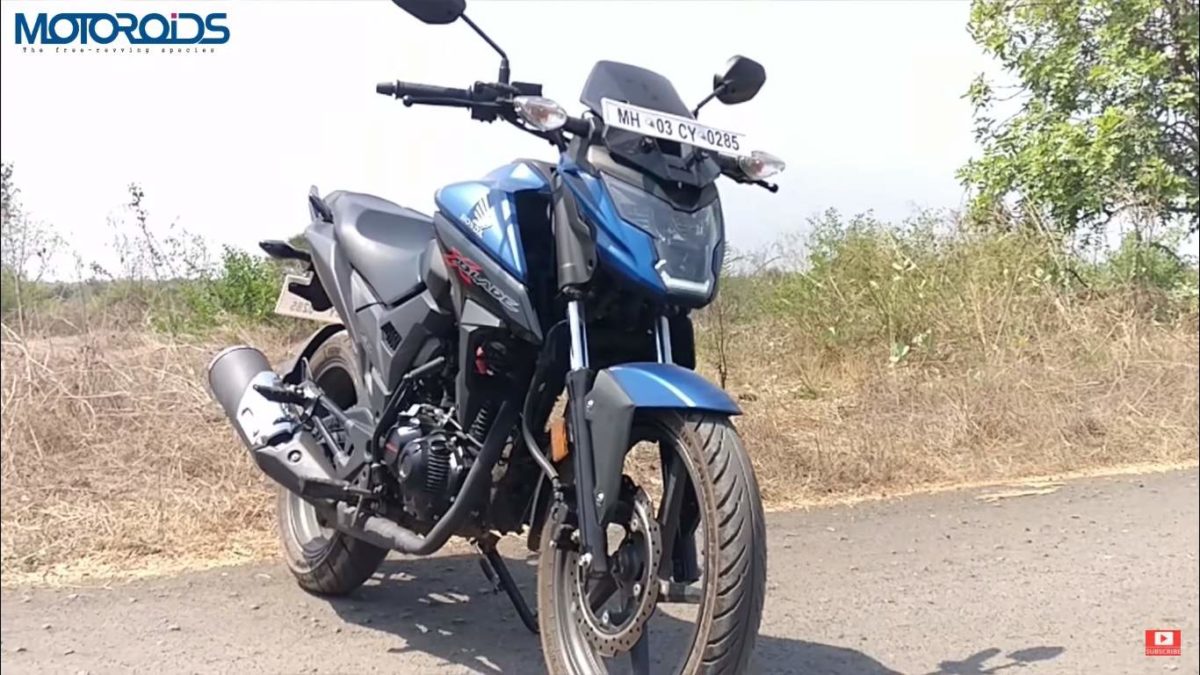 The Honda X-Blade is the newest addition to the Honda lineup and is powered by a 162.7cc engine with 14.12 bhp of power and 13.9 Nm of torque. The Honda X-Blade weigh 138 kg.  Honda’s fantastic build quality, longevity and good pricing are the high points for this motorcycle. The bike also gets LED headlamps as standard and LED tail lamps. It also gets a digital instrument cluster. 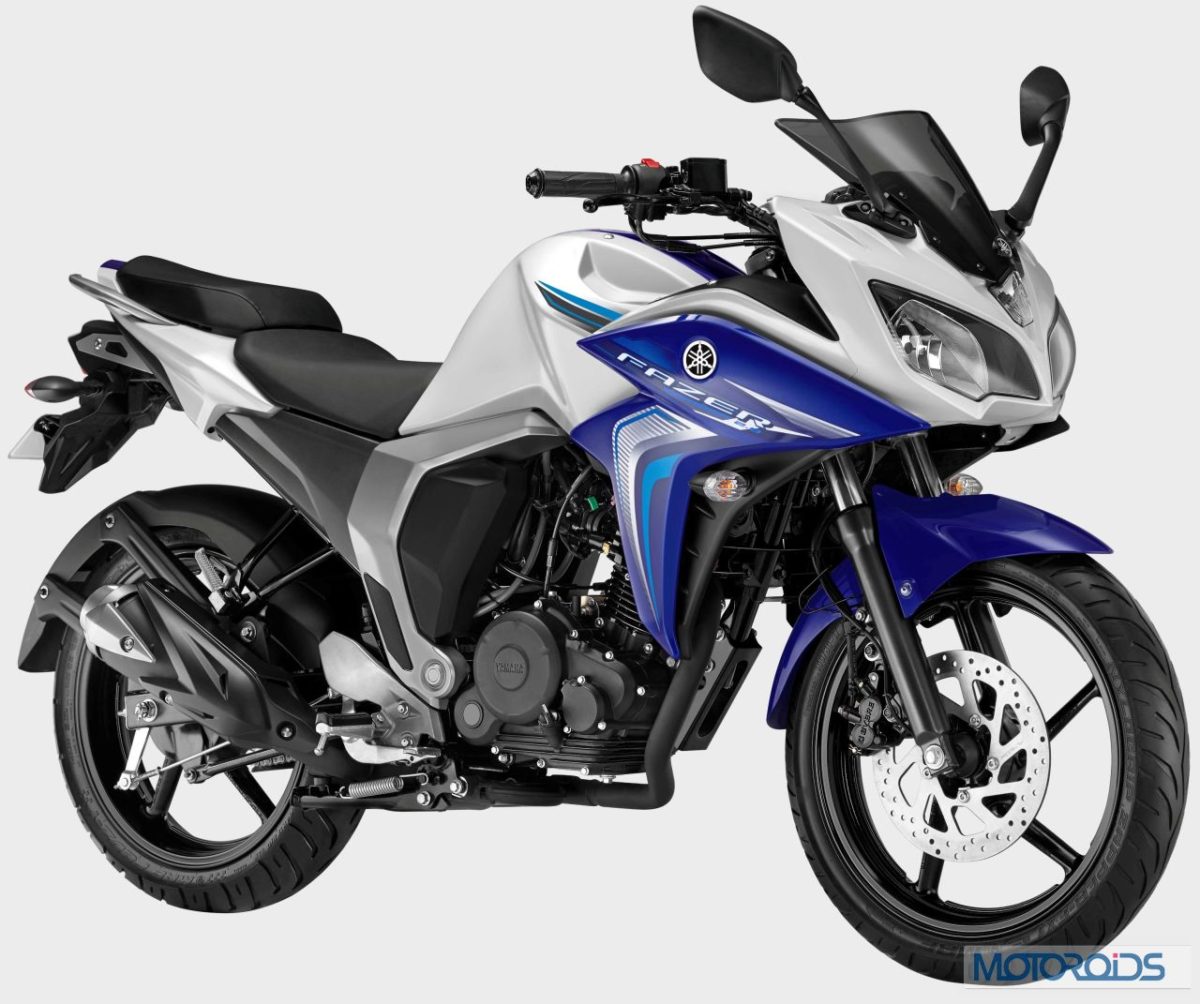 Yamaha positions the Fazer as a touring bike. This bike is essentially an FZ-S V2.0 with a quarter fairing. Moreover, it also has a dual-headlamp setup with a pilot lamp below the base of the windshield. You can spot a fully digital instrument console on this bike. A 149cc single cylinder fuel-injected motor powers the Fazer FI V2.0 which produces a maximum power output of 13.1 bhp and a peak torque output of 12.8 Nm.