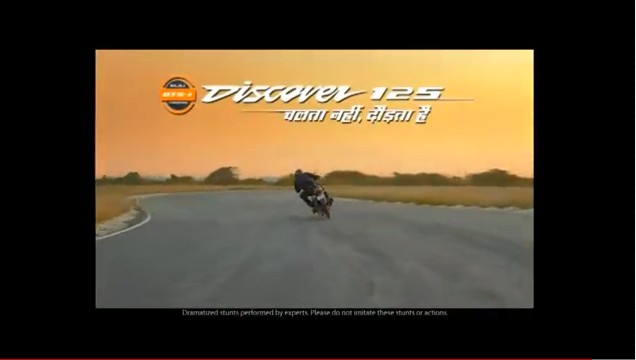 We have a twinkle in our eyes as we write this. Bajaj Auto Limited seems to have decided to take arch rival Hero Motocorp head on with its latest ad campaign for its Discover 125. In Europe and America, its common to see automakers gunning for each others’ heads with ads which have direct / indirect references to rival products. Be it Nissan mocking Ford engineers in Brazil, Audi mocking BMW for always being second in shootouts or BMW using Japanese art forms to depict the superiority of the S1000RR over all the Japanese bikes – the corporates from the Western world love bringing their mutual melee out in the open, entertaining the audiences liberally in the process. Now Bajaj Auto seems keen on doing something similar here in India.

Readers would remember that even Mahindra two wheelers did something similar with their first ad for the Stallio, where Aamir Khan made references to the Karizma by using phrases like ‘Toofan se topi laati hai kya’.  That the product wasn’t good enough, and mahindra ended up making a mockery of itself in the end is a different story altogether. With the new Discover ad, Bajaj Auto seems to be making indirect references to the (Super) Splendor and Passion, the two competitors of the Discover. The ad asserts that the Bajaj product has better acceleration and power than the corresponding Hero Motocorp products. The owners of the vehicles admit that they’re riding compromised vehicles, but have learned how to live with the sad situation. It’s all been portrayed in a very interesting (and annoying for Hero Motocorp) manner.

Now Hero Motocorp may take the legal route, and try to drag BAL into court. But that, we don’t think would be any fun. We’d love it if Hero goes one up and comes back with something with an even more poisonous sting.

Here’s the ad. Do let us know your views on the whole story.