The Isuzu DMax Vcross is a capable machine targeted at those with a liking for an adventurous lifestyle, with practicality and utility thrown in, in equal measure. With its twin cab layout, the Dmax Vcross has space to seat four in its standard cabin, with a generous loading bay in the back to lug anything from farm produce, livestock or the entire load of your adventure gear along with a couple of bicycles thrown in. With a capable 2.5 litre diesel dishing out 123hp of power and 320 Nm of torque, it’s also as punchy as it is prudent. To round things up, it comes equipped with a very capable 4×4 gear to give it some serious go-anywhere capability. 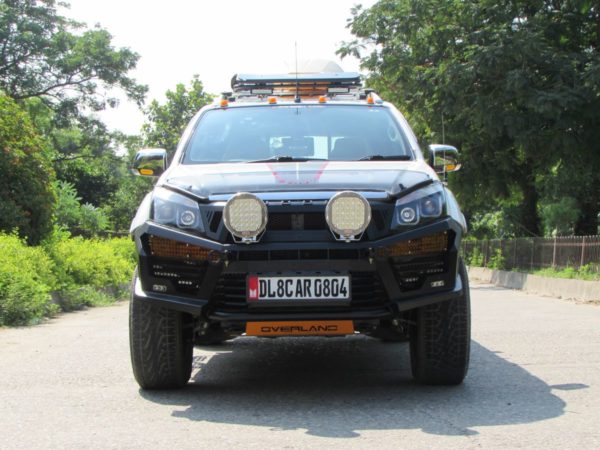 It’s a rather unique proposition for those who love the intoxicating life in the countryside, and venture out often on their adventure trips, exploring vistas few have seen. However, often times, our capability to venture out into the unknown is restricted by a lack of habitable environs, especially when we venture too deep into the wilderness. Lodging facilities are still not an option in many parts of rural India, and even when they are some nomadic souls among us would rather camp out. Wouldn’t it be great if there was a machine which took you to your dream destinations, while still cosseting you in luxury, as though you were living in your own home away from home? 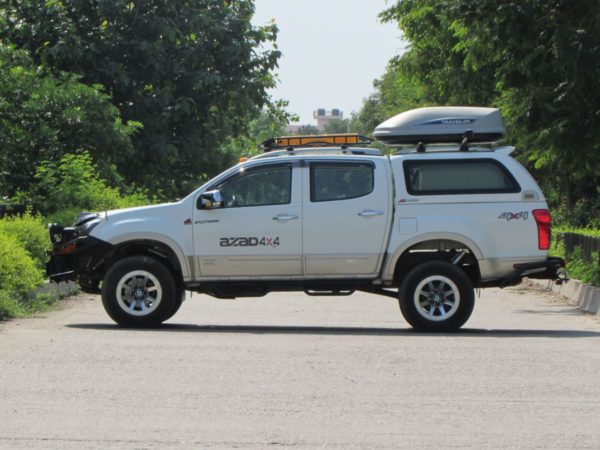 It’s for such car-loving explorers and adventurers of extreme nature that the very well-known Azad 4×4 Custom House have designed the Isuzu Vcross Dmax Tourismo. Boasting what is termed as a canopy layout for the loading bay, the designers and capable fabricators at Azad 4×4 have converted the flat bed at the back of the pick-up truck into a luxurious abode where three mortals can stretch their bodies to the fullest and sleep comfortably and safely even when they’re far away from civilization. 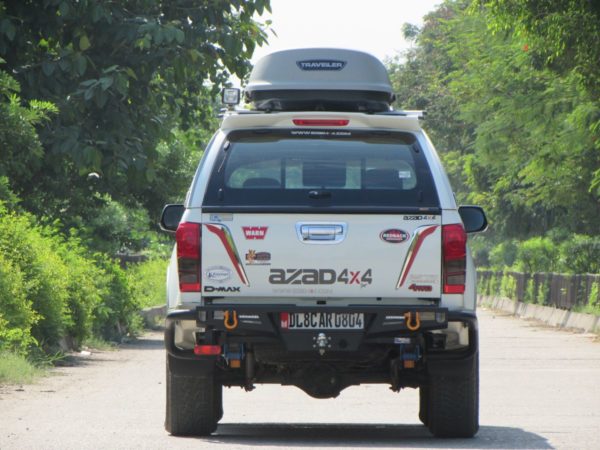 The passionate team at Azad asserts that their rendition of the Vcross Dmax is a totally unique proposition – the best of its kind in India. They call the Tourismo a ‘home away from home’ for those who are constantly looking forward to adventurous escapades away from the urban jungle. 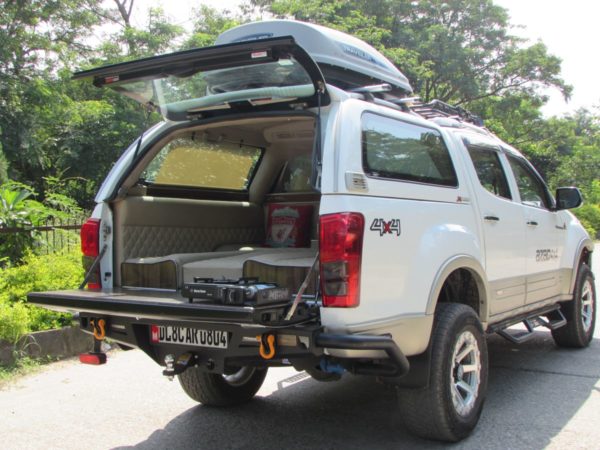 The Isuzu DMax Vcross features high quality, rugged X Series Fibre glass Canopy. The X Series Canopy used on the Tourismo is advantageous as it is a made in India product. The Indian made canopy is much lower in cost than the ones coming in from Thailand and China. Also, the spare parts for the canopy are easily available such as glasses, locks and shockers, facilitating efficient after sales support. The blokes at Azad have taken the cause of Make in India, as another reason for implementing this canopy for the Tourismo. 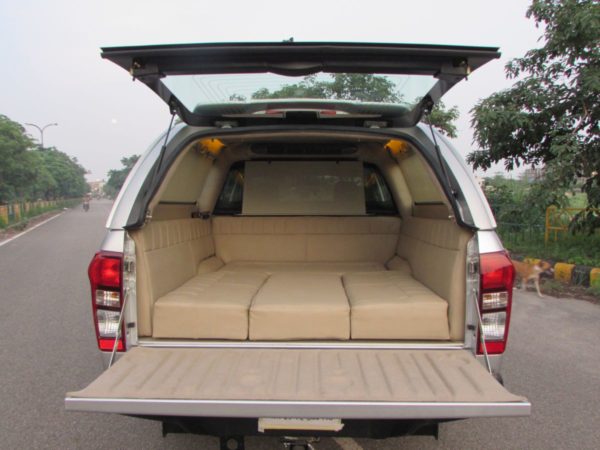 The rear glass of the enclosure comes equipped with a de-fogger. Also, while the tinted side glasses are fixed as standard fitments, they can be had in the sliding format as an option. The aesthetical value of the cabin has been taken due care of too, with fine fabric roof lining. The cabin gets mood lighting to match your preferences after a tough day out in the wild. To make the interior look rich, luxurious and functional, the cabin gets blinds, charging points and glass holders. A rear spoiler high-mount brake light completes the exterior look at the rear. 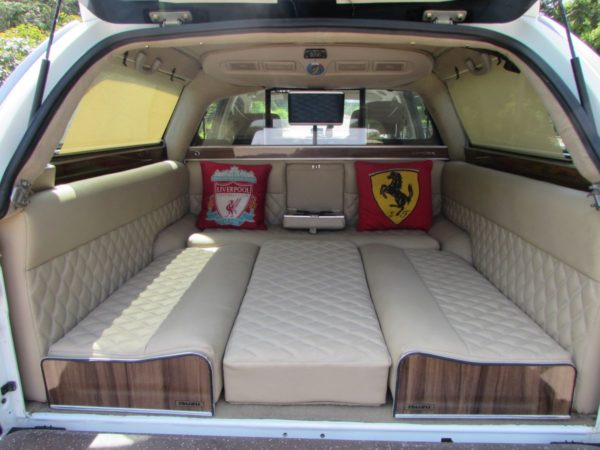 The seating layout at the rear is in a low-seating format which can be quickly converted into a comfortable bed for three. The seating has been provided with generous back support to keep the occupants comfortable while seated, even when the vehicle is on the move. The canopy section also gets its own AC Kit, wherein the occupants get an AC blower with a separate switch connected with the main compressor. 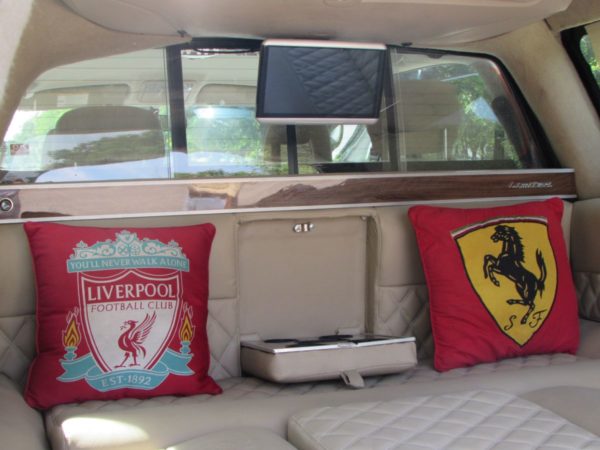 While the standard list of features on the Tourismo is pretty generous by itself, there is a whole bunch of optional features and add-ons you can choose from. The rear cabin can be outfitted with Android TV Connected with the main system. For those of us who don’t wish be away from our gadgets even on our adventure trails, the cabin can be equipped with USB port, and be made Bluetooth / Wifi compatible along with the fitment of additional speakers. 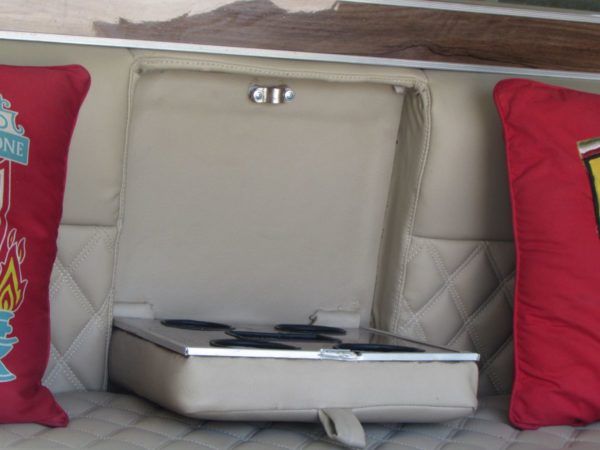 Now, staying in a mobile home is one thing, and living off it is another. For those who demand their Tourismo to offer a mini kitchen of sorts too, Azad 4×4 would outfit it with a portable Stove too, with a mini re-usable compact cylinder mounted at rear deck. You can also opt for a mini fridge – with a 12 litre capacity, drawing its power from a 12v power supply. Finally, if you want your luggage to be sitting out of that luxurious cabin, you have an optional Roof Box for additional Storage.

You can check out all the wonders of the Azad 4×4 Dmax VCross Tourismo in the gallery provided below: