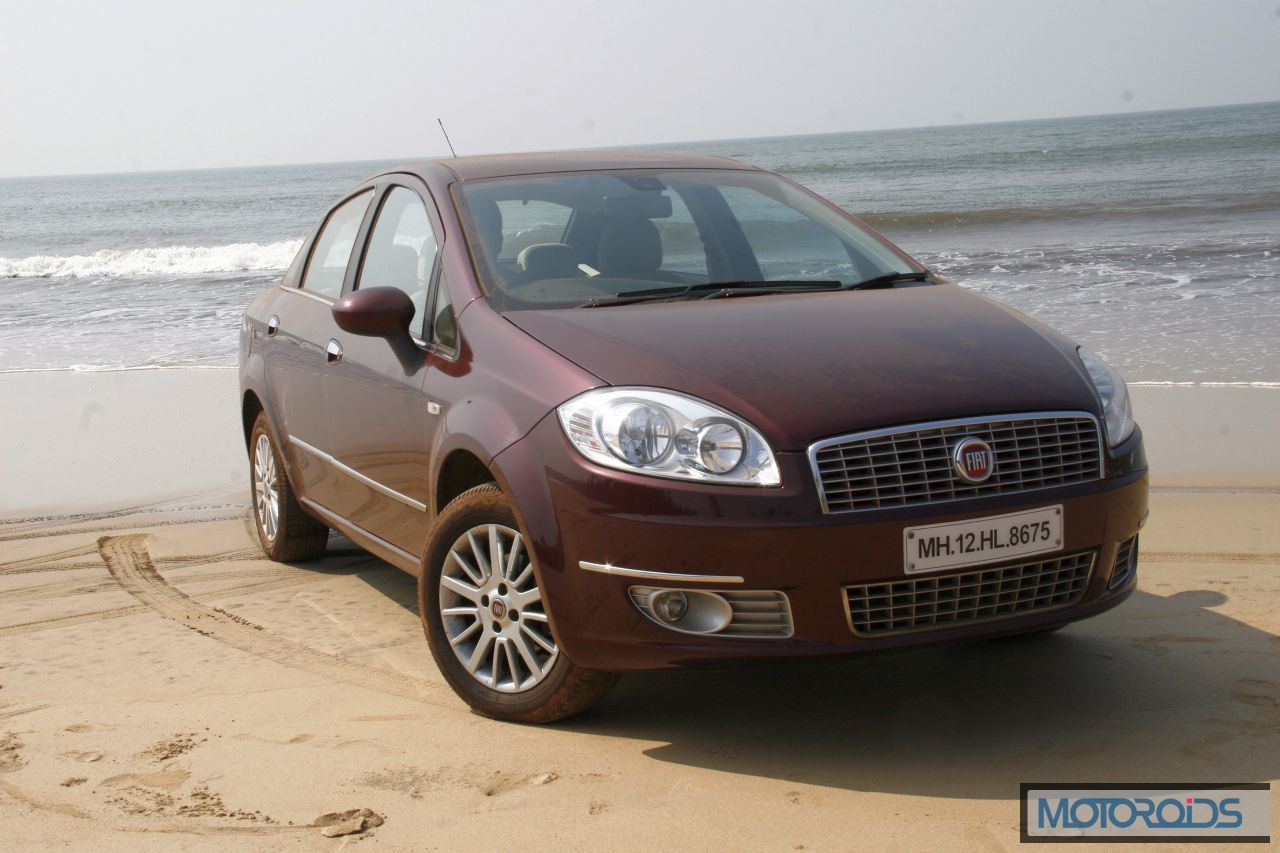 The Linea 1.4 petrol was our companion to Velneshawar beach where we partied all night to welcome the Year 2013 with a bang. About 300 km from Mumbai, this lonely place nestled in the picturesque Konkan is as secluded as a beach could ever be on a New Year’s Eve – just perfect for us to set our own stage up! Another reason to choose Velneshwar was that we have a family owned bungalow in Chiplun, only 50 km away from the beach. Proximity to other beaches like Guhagar and Ganpatiphule and plenty to discover around, this was to be a brief holiday with the entire family and their respective friends invited.

We took off early on the morning of 29th. Starting off early meant we managed to beat the irritating Mumbai traffic. To our surprise, there wasn’t a single car in queue at the Panvel McDonald’s drive through – helped us grab a quick breakfast without wasting much time. The Linea, with its able handling and all-absorbing suspension made light work of tackling the single lane Mumbai-Goa highway with no median. We found a small jam around Pen, with traffic cops in white and khaki being responsible for the most part of it, thinking they were ‘regulating’ the traffic. If you find a jam, more often than not, be sure there’s a traffic cop around. Our dash to Chiplun with two brief breaks took us five hours – the occupants emerging out of the car rather fresh. 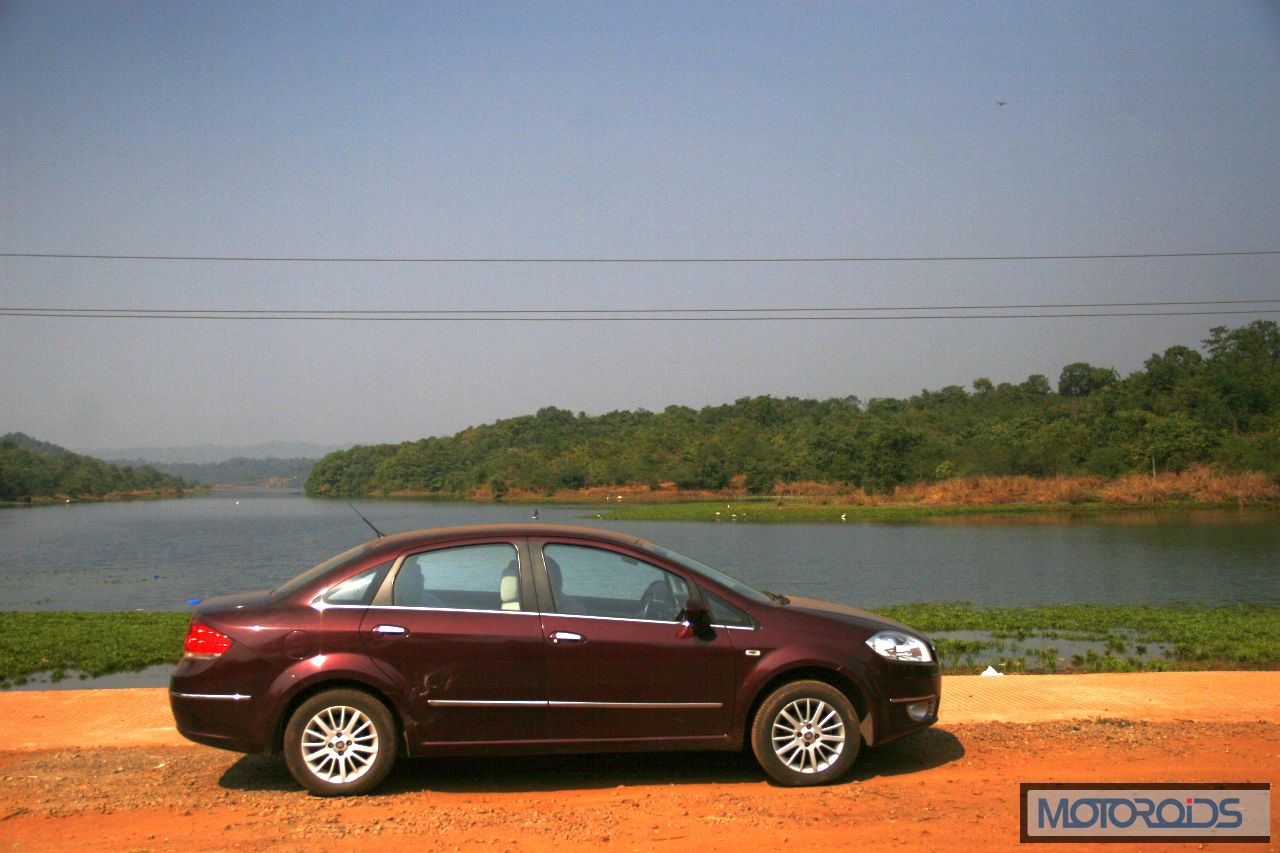 On the banks of Vashishti River, Chiplun

We were the first to reach, with the rest of the gang following soon after. Some of the friends were to join us the next day, but by evening there were fifteen of us. We decided to spend the evening at the Quality resort, once a Taj property, immaculately maintained even today, and offering a majestic view of the meandering Vashishthi river from its manicured dining lawns. A mildly cold weather, with some delicious food and hours of blabbering with friends made for a memorable evening. Needless to say, the after party continued at the house in Chiplun till the wee hours.

The next day started on a languid note, with people taking their own time getting up to speed. By late afternoon, we started off for the Talkeshwar temple and the beautiful light house, surrounded by the ocean on two sides. Towering 200 feet above the sea level, the light house stood resplendent with the crimson evening sky forming the perfect backdrop. The hillock where the lighthouse is situated offers a magnificent view of the sea, just the perfect place to spend some quiet moments on a beautiful evening. The highlight of the evening was the humongous flock of birds we witnessed. There must have been thousands of them, too high in the sky to make out which species they belonged to, but leaving an indelible memory on the minds of all of us who were present. 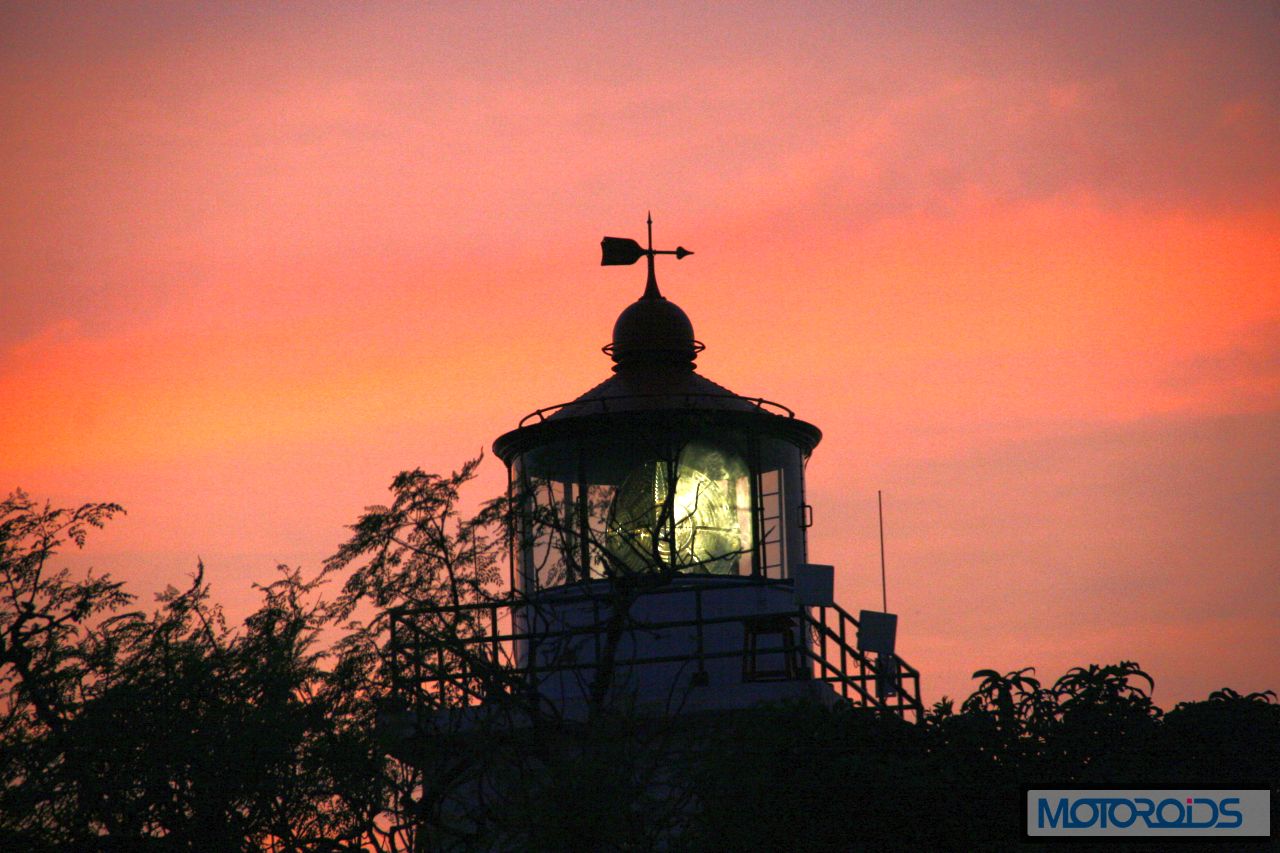 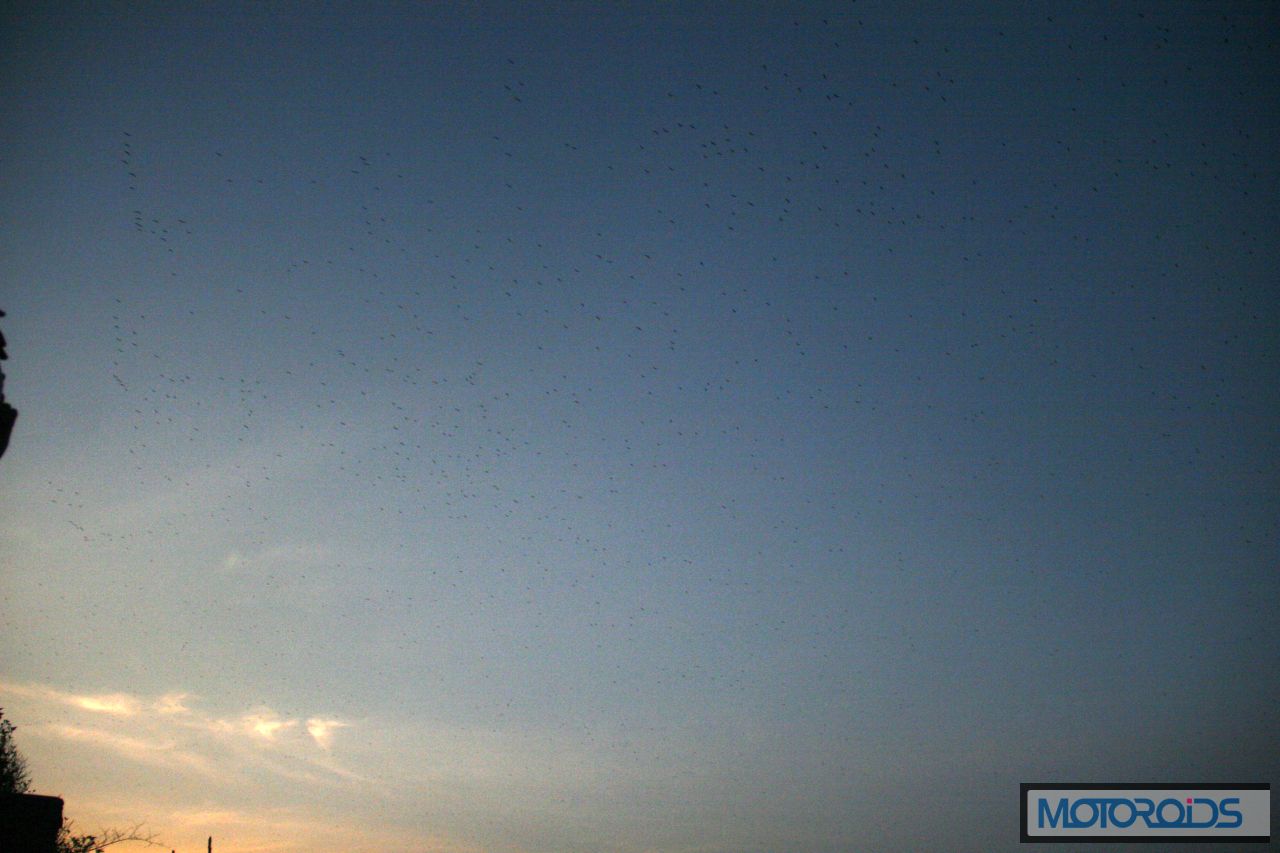 This ain’t no ordinary photograph. Zoom in and see the biggest ever flock of birds we ever witnessed in the sky

As the sun hid itself behind the horizon, it was time for us to head off to one of our friends’ farms. The Linea’s cavernous boot was loaded with a barbeque station, and all sorts of meats to be cooked. The farm house was quite some distance away. The Linea, with its brilliant headlights and a reassuring set of feet took us to the destination before anyone else. The mats came out, the barbeque was put to work, and soon enough we were enjoying a gala time with friends, in a farm situated in the middle of nowhere with no illumination other than the milky light of the full moon. English classics played on till late night as people ate, drank, and swung to the tunes before they crashed into their respective bunk beds. A blissful evening! 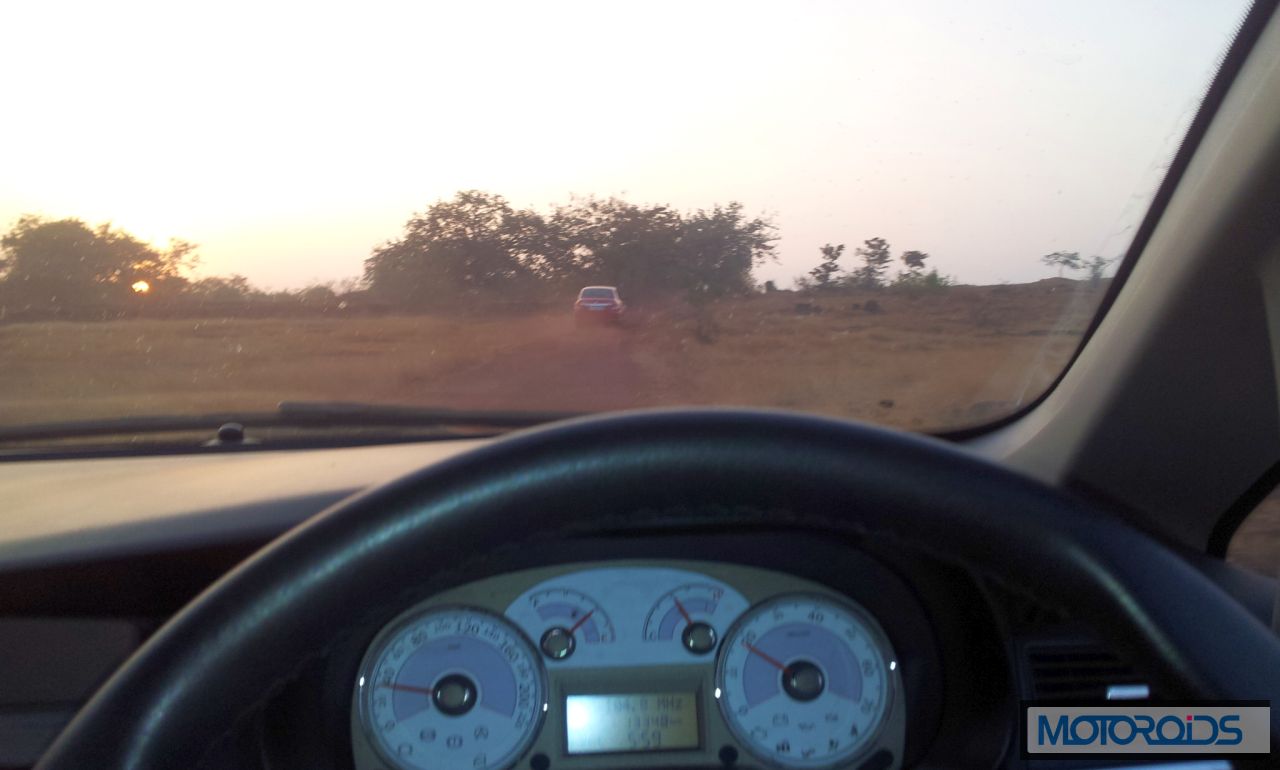 Making a dash to catch the sunset 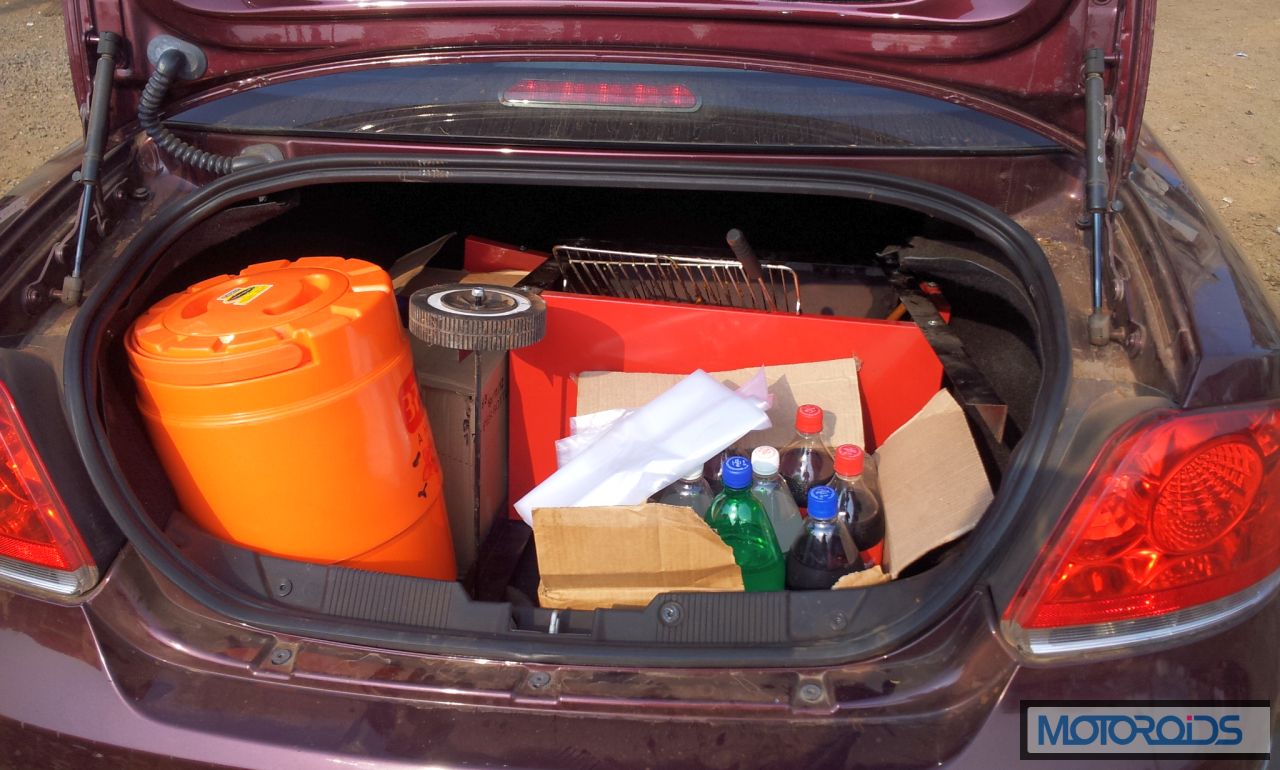 Linea’s boot swallowed a full barbeque station, a water cooler, mixers and a couple of bags with ease
Being one of the volunteers to make the arrangement for our beach party, the most part of the next day for me, and a few others was spent arranging stuff – hotel bookings, meat for barbeque, music, coal, mixers and so forth. A two hour long drive from Chiplun saw us passing through some beautiful landscapes, rivulets, open grassy plateaus and jungles to the beautiful Velneshwar beach.

The evening started at a lazy pace. Only a few showed up at the beginning, with most of the couples catching a quick nap to make sure their batteries were fully charged for the long night. Others were busy getting decked up. However, as everyone joined in, the headcount, including children went to an amazing 30. We were all geared to set a forlorn beach on fire. This party was for real. 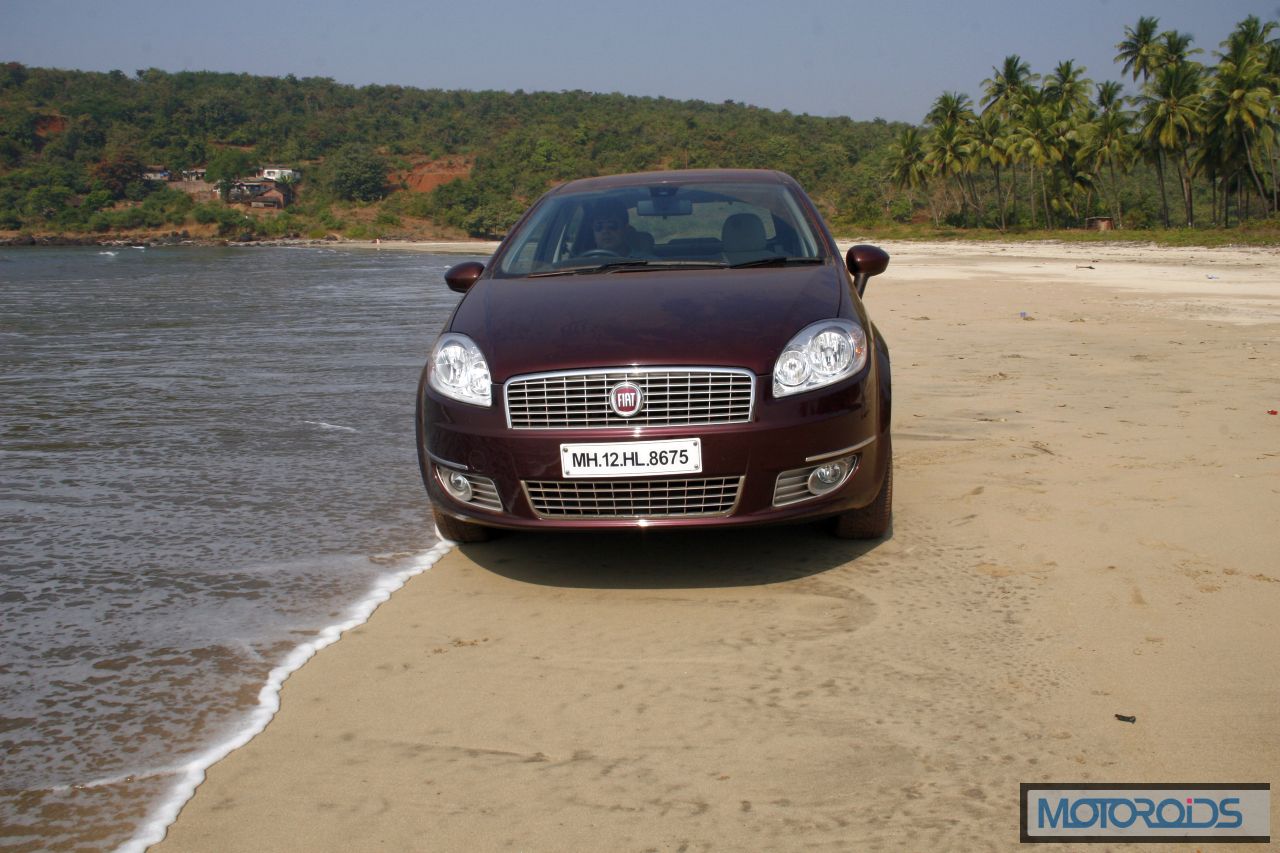 The Linea on the Velneshwar beach
The music was a mix of popular Bollywood dance numbers, international club anthems and the classics. Ashish Rai, or DJ Ash, as we nicknamed him, pulled off the impossible task of pleasing everyone with his selection through the night. As the two arms of the clock overlapped each other in an erect position, we were pleasantly surprised to see bright fireworks illuminating the sky. Surprisingly, we were not alone in the wilderness, but our fellow revelers were thankfully distant enough to allow us our privacy.

Yours truly was the last man standing at the party, along with a friend of his. In the middle of the night, standing waist deep in water, and witnessing the froth on the shore lit up brilliantly by the white moonlight – we couldn’t really have thought of a better way to ring the New Year in. 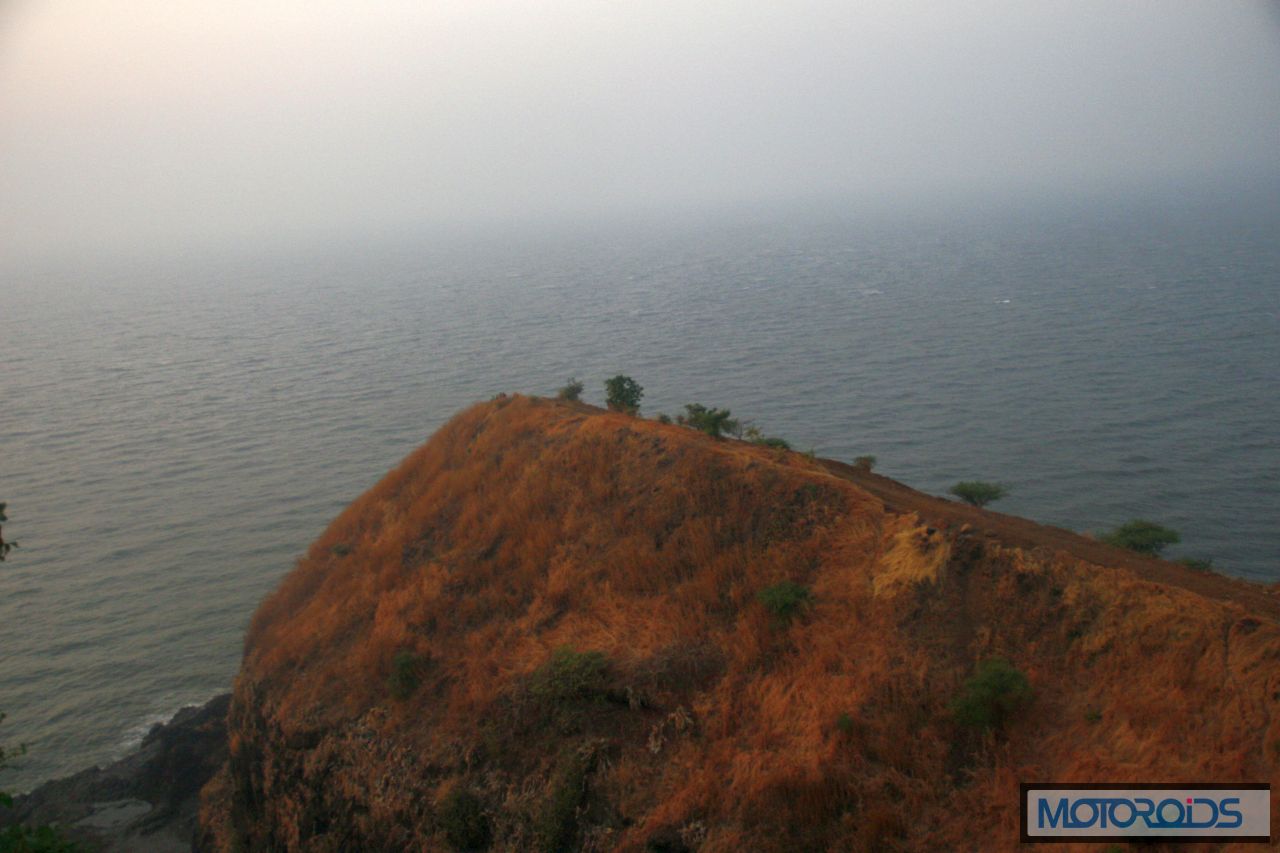 With its cavernous boot, ample space inside the cabin and underpinnings which took the rough roads in their stride with aplomb, the Linea really was crucial in making us realize our dream New Year’s party. The maroon Linea is permanently etched in our memories comprising of one of the best New Year’s eve we have ever celebrated.