An inkling of the EBR 1190SX pricing has emerged from Europe. As the naked superbike starts undergoing delivery in Europe, it appears that it will present a tough fight to other competitors. 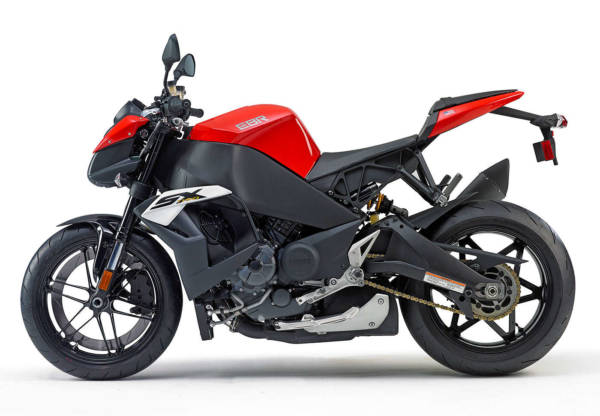 The EBR 1190SX is a streetbike based on the design of another track-going bike, the 1190RX. The American manufacturer has followed an oft-repeated formula of ditching all the bodywork. Generally, manufacturers also resort to a lower state of tune on the powerplant. Thus, the engine will offer a lesser number of horses, but will cough up an increased amount of torque. This enables the bike to be ridden comfortably in real-world conditions, without too much of dancing on the gearbox.

However, EBR hasn’t treaded down that path. The powerplant on the EBR 1190SX is exactly similar to the one on the 1190RX. It will thus offer a peak power output of 185 horsepower at 10,600 revs. The peak torque of 138 Nm will come at a much lower 8,200 rpm. EBR has also left the gearbox untouched. The six-speed gearbox on the streetfighter 1190SX has ratios identical to that of the 1190RX. Only thing that we would miss is the multi-level traction control that is present on the 1190RX.

Here’s a comparison of the EBR 1190SX pricing to some other bikes being sold in Europe :

Hence, EBR has succeeded in placing a competitive price tag on the 1190SX. Only one bike, the BMW S1000R, retails at a price lower than that of the EBR 1190SX. EBR’s ploy of keeping the vast of the bike unchanged, as well as using an engine that’s already been mass-produced, might have just done the job. The EBR 1190SX pricing could be just about hitting the sweet spot, nothing less nothing more!