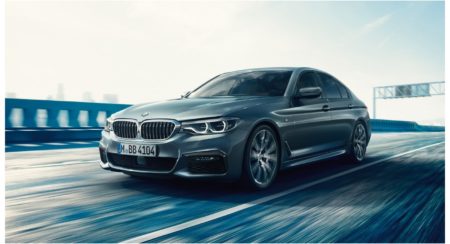 The BMW 5 series 7th generation takes a lot of inspiration and design cues from its Elder sibling the 7 Series. The new 5 series looks very bold and muscular with straight lines and creases. The new car gets lots of bits from the 7 series as well like the new active stream kidney grille with air curtains which essentially reduces the drag coefficient of the car. Overall the 5 series is a very handsome looking car and grabs a lot of eyeballs in the roads

The BMW 5 series Looks nothing like the previous generation car. The design language of the car has changed by miles but remains true to its original BMW signature styling. The new 5 series takes a lot of design cues for the 7 series. The new 5 series is slightly wider and longer than the previous gen car. It gets the 7 series inspired signature kidney grille. The 7th gen also gets new LED adaptive headlights and a smart access boot to complete the package

The BMW 5 series gets one of the most luxurious and comfortable cabins in the segment. The cabin is very well built with tons on wood being used on the dashboard and high-quality leather wrapped around the seats. coming to the seats, the front seats are electronically adjustable and have 8 massage functions as well. It gets the Idrive touchscreen infotainment system with navigation but apple carplay is only available in the top 530d Msport trim. The rear seats are where the changes are more pronounced and dramatic they are wider bigger and roomier than the 6th gen car thanks to the increased size and wheelbase of the car. the car can seat 4 people in comfort for long journeys and has a decent 530l boot which is more than adequate for a weekend getaway

other mentionable features of the car include automatic air conditioning with 4 zone control, rear seat entertainment, gesture controls, heads up display(HUD),  intelligent start/stop and to top it all the BMW display key which can be used to control the car

The 2.0l diesel in the 520D is the natural choice for anyone who only intends to drive the car in the city with an occasional highway drive, it is a very smooth and refined engine with a very linear powerband but lacks the top end grunt. the 2.0l petrol in the 530i Msport and the 3.0l diesel in the 530d Msport are perfect for enthusiasts these engines have adequate top end grunt and are very fun to drive