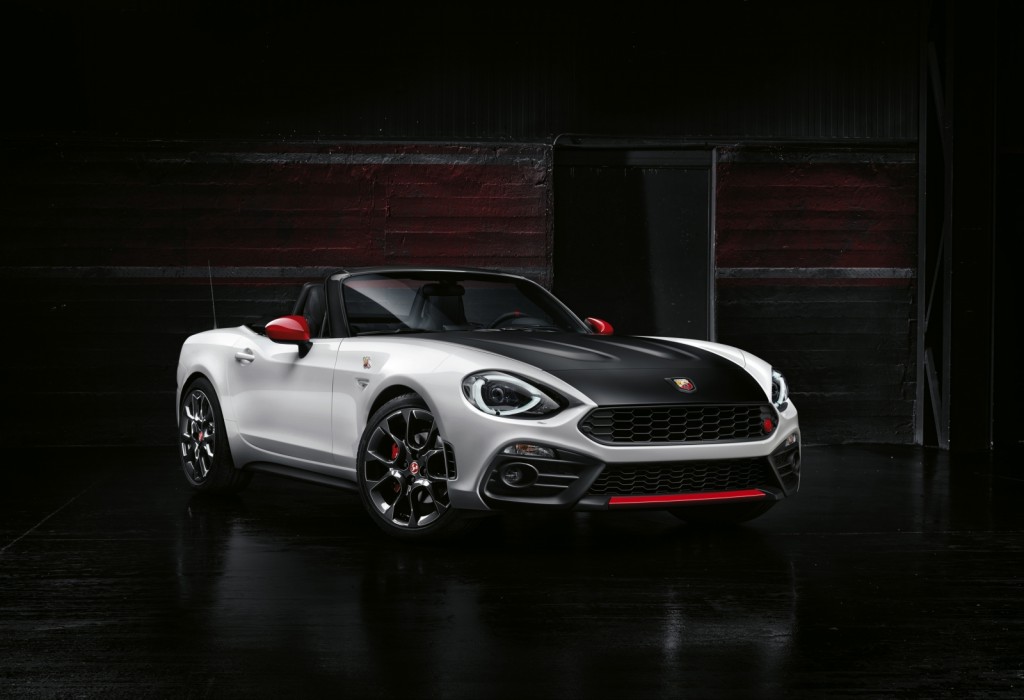 FIAT took almost 50 years to revive their 124 Spider, but when they did it, they put on a fantastic show. The glamorous FIAT 124 Spider was unveiled at the LA Motor Show last year. Following its launch the automaker had already floored the Abarth plan for the roadster and the scorpion badged Spider was spotted in camouflage during a public road test. Now the FIAT Abarth 124 Spider has just made its debut at the 2016 Geneva Motor Show. Well that’s not all – the dias of unveiling was shared with the Abarth 124 Rally Version (below) that brings back the name forty years after its last official race, the 1976 Monte Carlo Rally. 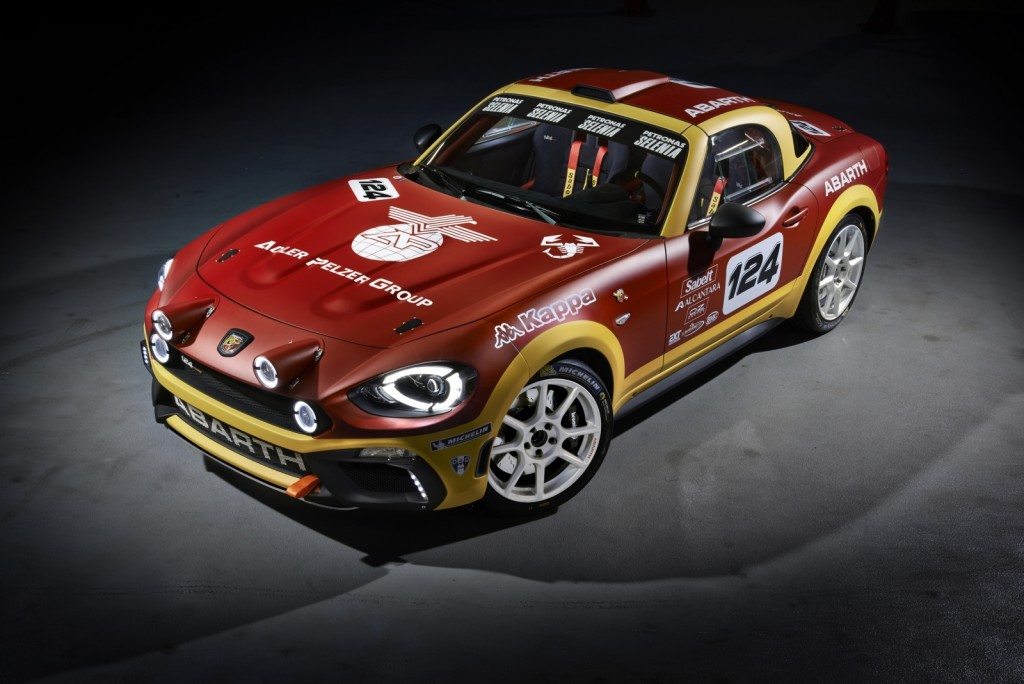 On the visual front the Abarth 124 Spider retains the same silhouette as its humble regular version, but there are fancy touches of tech-mech and design that sets it apart. Like its cousin from Fiat, the front the Abarth 124 Spider features a long bonnet with reduced overhangs that emphasizes the roadster’s agility. The headlamp unit is carried forward from the regular model but the front bumper features extra chunks to support its sporty character. The FIAT insignia is replaced with the Scorpion badge and the front bumper is underlined with a red coloured strip. The passenger cabin sits close to the rear axle and it ratio with the bonnet is said to be comparable to that of a racing car. The body lines on the side remain the same. The Abarth 124 Spider drives on new 17-inch alloy wheels, finished in ‘Forgiato Grey’, a colour selected to underline the sinister inclination of the car. 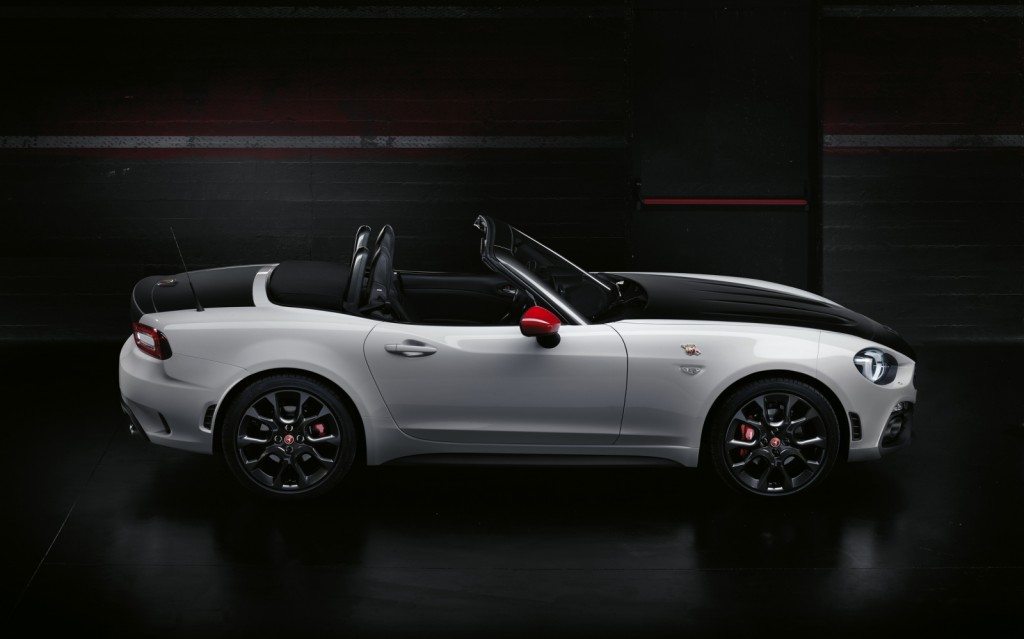 Moving to the rear section of the Abarth 124 Spider, the swallow-tail section rear wings and the horizontal rear lights are inspired from its classic predecessor. The shape of the rear bumpers with the upper surface protruding out into the boot lid conveys a characteristic V-shape to the back of the car. The FIAT Abarth 124 Spider will roll out in five body colours namely – Turini 1975 White, Costa Brava 1972 Red, metallic Isola d’Elba 1974 Blue, Portogallo 1974 Grey and San Marino 1972 Black. The nomenclature is a tribute to its prestigious success in rallying. 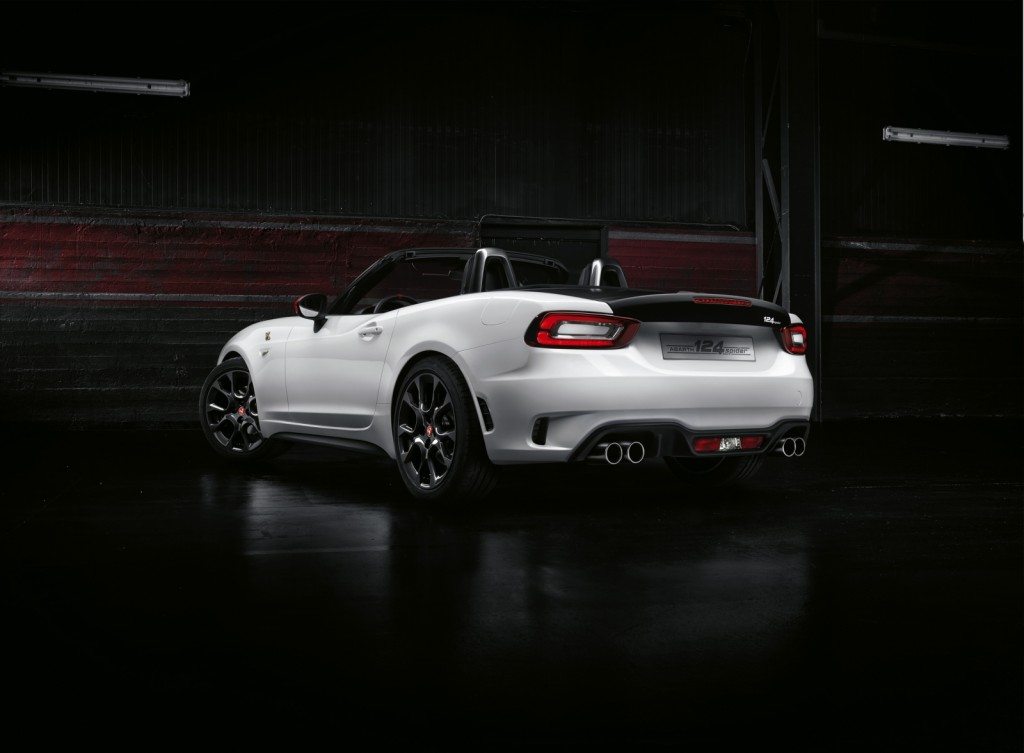 The Abarth 124 spider is powered by a four-cylinder 1.4-litre MultiAir Turbo engine. The engine is capable of putting the car into action with 170 hp of power and 250 Nm of twist. The power is pushed to the rear wheels by a six-speed manual or an automatic Sequenziale Sportivo gearbox. The maker says that the Sequenziale Sportivo gearbox is the result of careful tuning to exploit all the engine torque and conveys genuine racing sensations. The Abarth 124 Spider can do a 0-100kmph phenomenon in 6.8 seconds and goes all out at 230kmph. 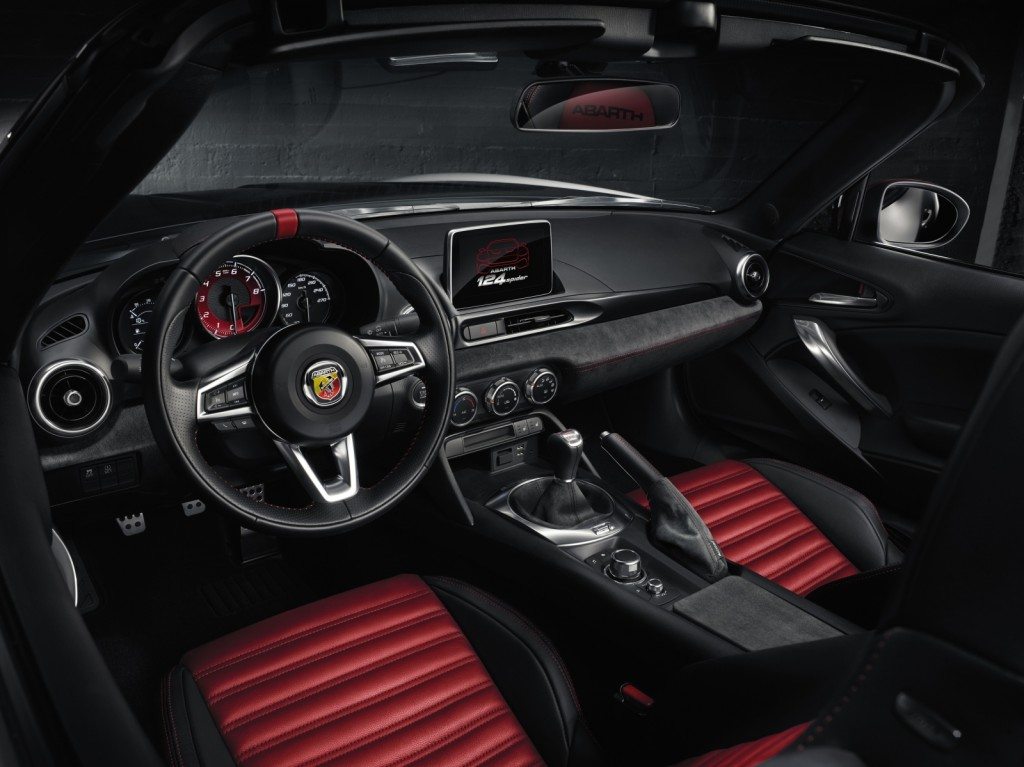 On the inside, the Abarth 124 spider has a three-gauge instrument panel in its cockpit that features a large rev counter in the middle, a speedometer on the right and a data display on the left. Standard equipment includes manual climate control system, stereo with four speakers, MP3 player and USB port, cruise control, adjustable and electrically-folded door mirrors. The centre console can be pumped up with a 7-inch colour display, satellite navigation system, DAB digital tuner, two USB ports, AUX input, Bluetooth connectivity and a rear backup camera. The company also offers a Bose premium sound system with nine speakers, including dual headrest speakers on both seats and a subwoofer, but for some extra moolah! 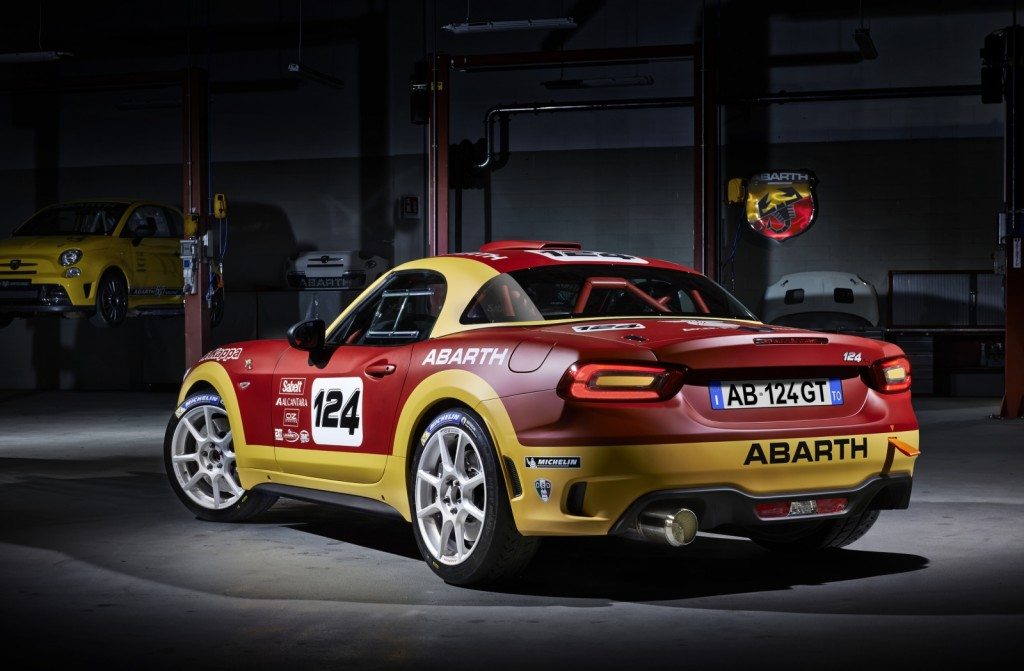 Talking about the new race spec Abarth 124 Rally is developed by the Abarth Racing Team premiered at Geneva Motor Show. It is equipped with 1800cc Bialbero turbocharged direct injection engine that provides power up to 300 HP at 6500 rpm. The engine is claimed to provide an optimum torque curve that allows the driver steering and acceleration balance while oversteering. The power is pushed to the wheels by a 6-speed sequential gearbox. The shift paddles and traction is underpinned by mechanical limited slip differential.

Each car is tested and certified by an Abarth technician who applies a metal plate showing the sequential number of each car to certify the exclusiveness of Abarth 124 spider. A unique number for a unique client. The lean-mean machine will be available in September with prices starting from € 40,000 (approx INR 30 Lakhs) for all Europe.

Here is an official video of the Abarth 124 Spider by Officine Abarth followed by an image gallery.