Not much time back, we posted a video of a unique race between a rather unusual line-up of machines, two planes, 3 road cars, an F1 car and one bike held on the new Istanbul Airport. The race was conducted under the Turkish Technofest, an Aeronautics, Space and Technology festival organized by the Turkish Technology Team Foundation with the intention to develop public awareness for technology. This festival is home to a lot of activities and spectacles such as award-winning technology competitions, exhibitions, seminars, various aviation demonstrations and professional aviation teams. What’s not to love about this? Redbull now has uploaded a better shot video of the race which is embedded below for you to see.

Let us talk about the machines competing in the amazing race, first, the cars involved, a Lotus Evora GT430 and the new Aston Martin Vantage, both equipped with extremely capable petrol engines and an electric Tesla Model P100 D equipped with the insane ludicrous mode. Another car, which I would not include in the ‘car’ category is Redbull’s RB8 F1 car, which packs a V6 petrol engine with electric motors. The planes involved are an F-16 fighter jet and a Bombardier Challenger 605 private jet and saving the best for the last, a Kawasaki H2R bike, a track-only version of the H2 superbike. 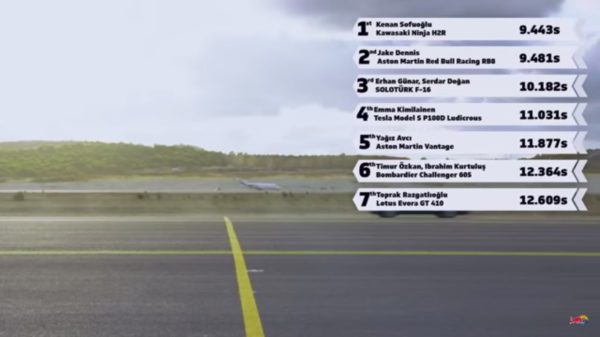 The race was a 1/4 mile long drag race from a standing start, which could have been a disadvantage for the planes considering the jet turbines take quite some time to start providing enough thrust. As you would have seen before, the H2R superbike bags in the victory, completing the quarter mile in a lightning fast 9.443 seconds while the F1 car comes a close second at 9.481 seconds followed by the F-16 coming in third with a time of 10.182 seconds. Now that is one crazy race, isn’t it?