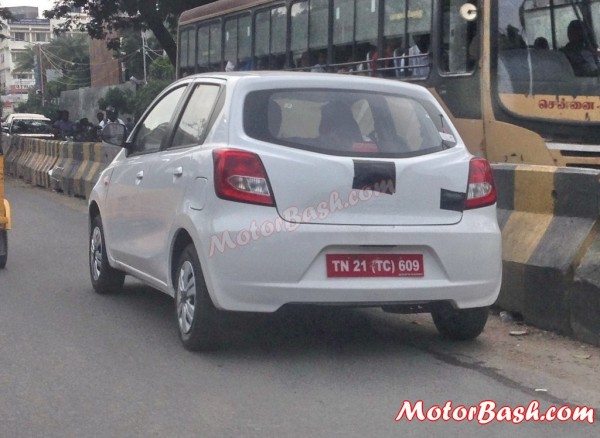 Seen here is yet another set of pics of Datsun Go testing in India.

The upcoming Datsun Go will hit the dealerships sometime early next year and as we told you recently, would be sold through Nissan dealerships.

The Go will most likely have a sticker price of less than INR 4 Lakhs and hence, the car would become a direct rival to the last gen Hyundai i10, the Maruti Suzuki WagonR and the Chevrolet Beat.

The Go hatchback is underpinned by the last gen Micra’s platform and akin to the Micra currently on sale, would be powered by a 1.2 ltr gasoline engine. Go’s engine would have a max power of 62PS. The Datsun Go’s price will undercut that of the recently launched Micra Active entry level variants. However, Nissan has assured us that the Datsun Go won’t be a stripped out bargain-basement versions of the Micra. 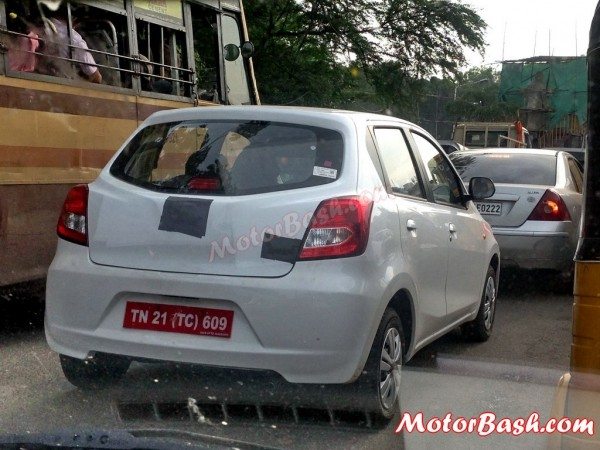 The Datsun Go boasts of a clean and understated exterior styling

Visually, the car boasts of good proportions and looks very much like what a modern hatchback should. While we do realize that the Go won’t win any beauty contests, its inoffensive looks and understated looks should appeal to a wide range of car buyers.

On the inside, the car continues to have a clean and understated design theme. The Go, much like the i10, boasts of a dash mounted gear lever and the upcoming car’s instrument binnacle consists of an analogue speedo-digital tacho combo. The car also gets a digi fuel gauge. The steering wheel is a three spoke unit and the insides of the doors are devoid of fabric inserts. Also, the car doesn’t get a a ‘close-able’ glovebox!

The front seats have fixed headrests and the new car’s front passenger seat extends all the way to the driver’s seat. This means that the car has a “bench seat like” arrangement (a la HM Ambassador!). We can already see people trying to squeeze three in the front!

It would be really interesting to note if Nissan India’s upcoming entry level hatchback would be able to fare better than well established rivals in the lower B segment.

Stay tuned to Motoroids for more updates on the Datsun Go India launch and other details.