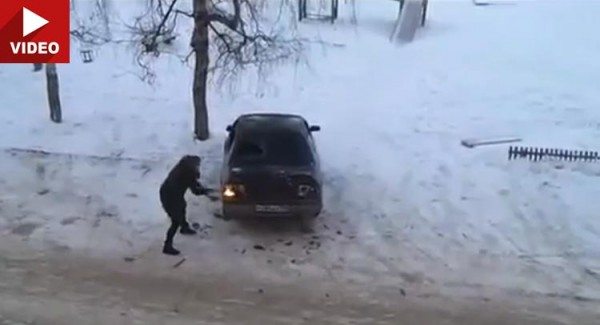 You really don’t want to piss off a Russian woman, by the looks of it.

There is nothing more precious to a petrol-head than their car. And we are not stereotyping a gender here; both men and women love their precious automobile, whether it’s a spanking new Audi or a crappy old hatchback. But, if you are in a relationship or married, you might want to pick a safe spot for your car, just in case you split with your ‘better’ half. We presume that women in Russia take the notion of revenge a little bit too seriously. The above image shows a livid wife (ex-wife, rather) axing her ex-husband’s car, bit by bit.

The shocking footage that you are about to see, was captured by a neighbour who was alerted to the vandalism by the sheer racket made by this woman. She’s so persistent, that the frigid weather and the vehicle’s blaring alarm didn’t seem to faze her one bit. From the car’s windows, to its lights and doors, she went on a hitting spree. The man who recorded this video even exchanged a few words with the unhinged woman. But, this being Russia, the language spoken is Russian and you might not understand anything. Nevertheless, still a funny watch, albeit a little cringeworthy for a car lover.