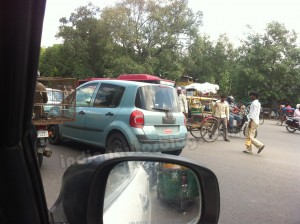 Thanks to varied climate and road conditions, India is fast becoming one of the more important locations for the car makers to test their new vehicles. We reported when we saw the Kia Picanto and the Citroen C4 Picasso being tested in the sub continent and now, pics of the Renault Modus being tested on Indian roads have emerged on the cyber space. The Modus is based on the widely acclaimed Clio hatchback and was last updated in 2008. However, the recent sighting is owing to the Modus being here as part of the worldwide validation for the next generation of the car. The current Modus is powered by the 1.5 litre K9K diesel engine that is seen powering almost all of the Nissan-Sunny cars in India.

Sadly, Renault has no plans to launch the Modus in Indian sub continent.